ENGLAND took the chance to Phil their boots – thanks in no small part to young mister Foden. 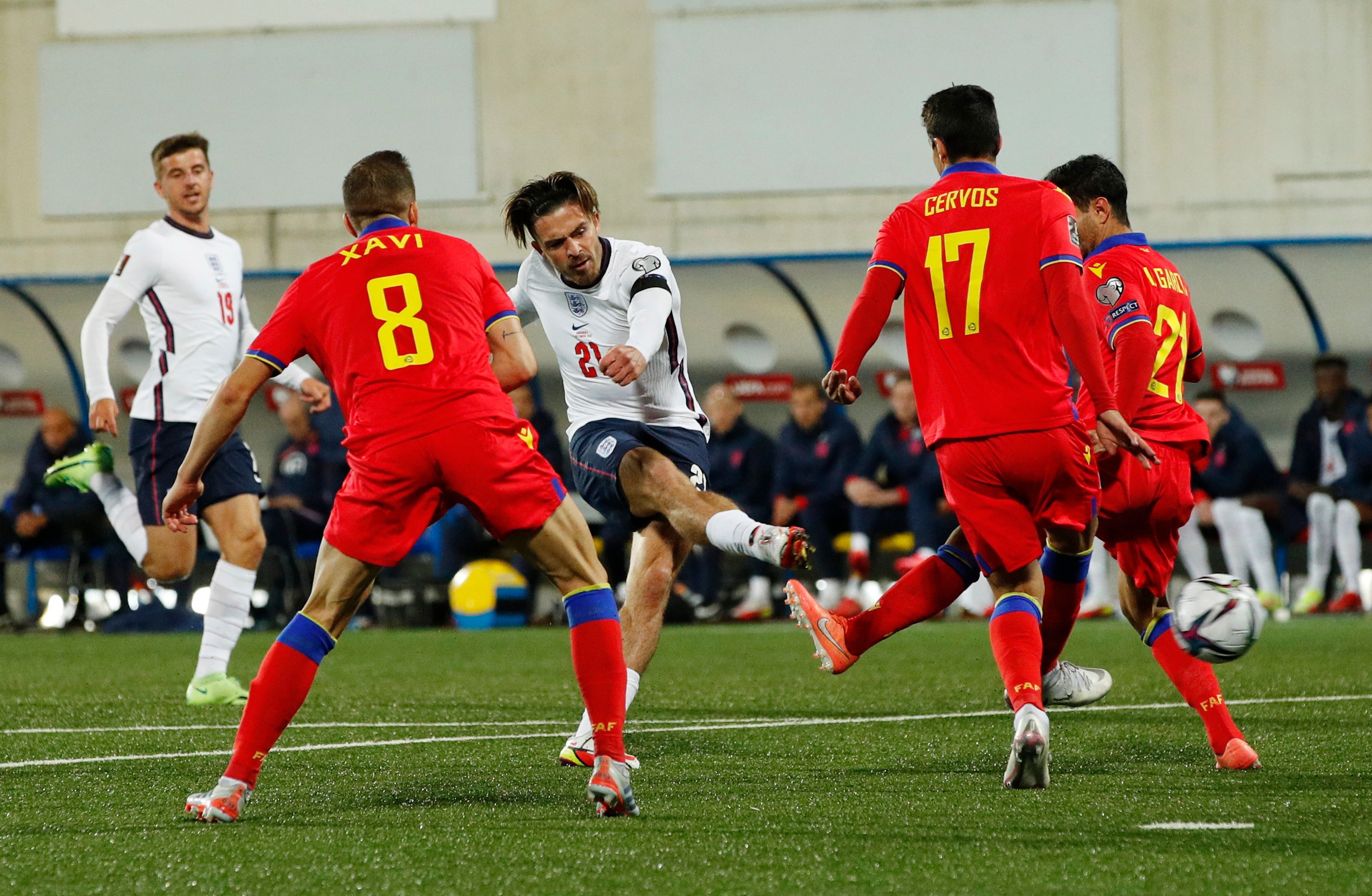 Jack Grealish finally got off the mark for the Three LionsCredit: Reuters 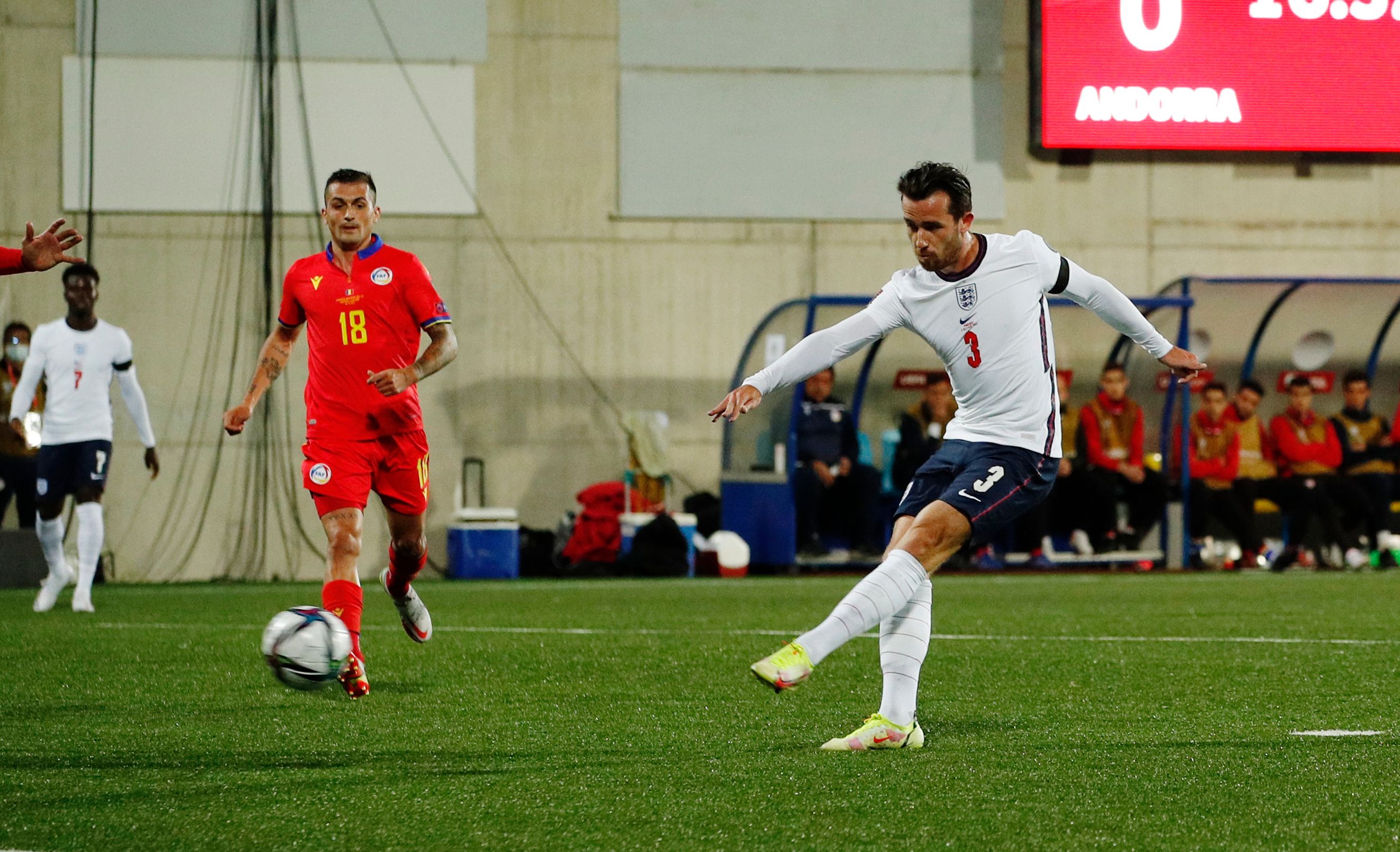 Roy Keane, not a man to bandy praise about willy-nilly, compared Foden to legendary quarterback Tom Brady after a first-half passing masterclass.

The 21-year-old was less influential in the second period but his overall performance offered an exciting glimpse of how integral he could be for England for years to come.

It was not just Foden who took his chance to impress Gareth Southgate – all three late call-ups to the squad scored.

Chilwell had gone from Champions League hero to Euro 2020 zero for a variety of reasons, and was a late addition to the England party.

The Chelsea full back’s response was to open the scoring with his first international goal and give a solid all-round display.

Jadon Sancho, having been told by his manager that he was lucky to be involved after a tepid start to his Manchester United career, teed up Chilwell’s goal.

In the second half, the £100m man crossed for another recalled player, Tammy Abraham, to make it three.

And James Ward-Prowse made the most of his own late summons by burying the rebound after his penalty was saved.

But in truth, neither England nor Southgate will have learned very much from a second encounter in just over a month against the 156th best footballing nation in the world.

This was a contractual obligation game and England did what they had to, no more, no less.

After the fire fiasco and sprinkler gaffe, the farcical undertone to the match continued with the opening goal.

Chilwell might have scored sooner but chose to head a Foden cross back towards Abraham rather than go for goal himself.

He had to wait only four minutes for another go – and then another two for VAR to award him his first international goal.

Foden’s fine pass found Sancho, who laid the ball back unselfishly for the Chelsea left back to belt it into the net. 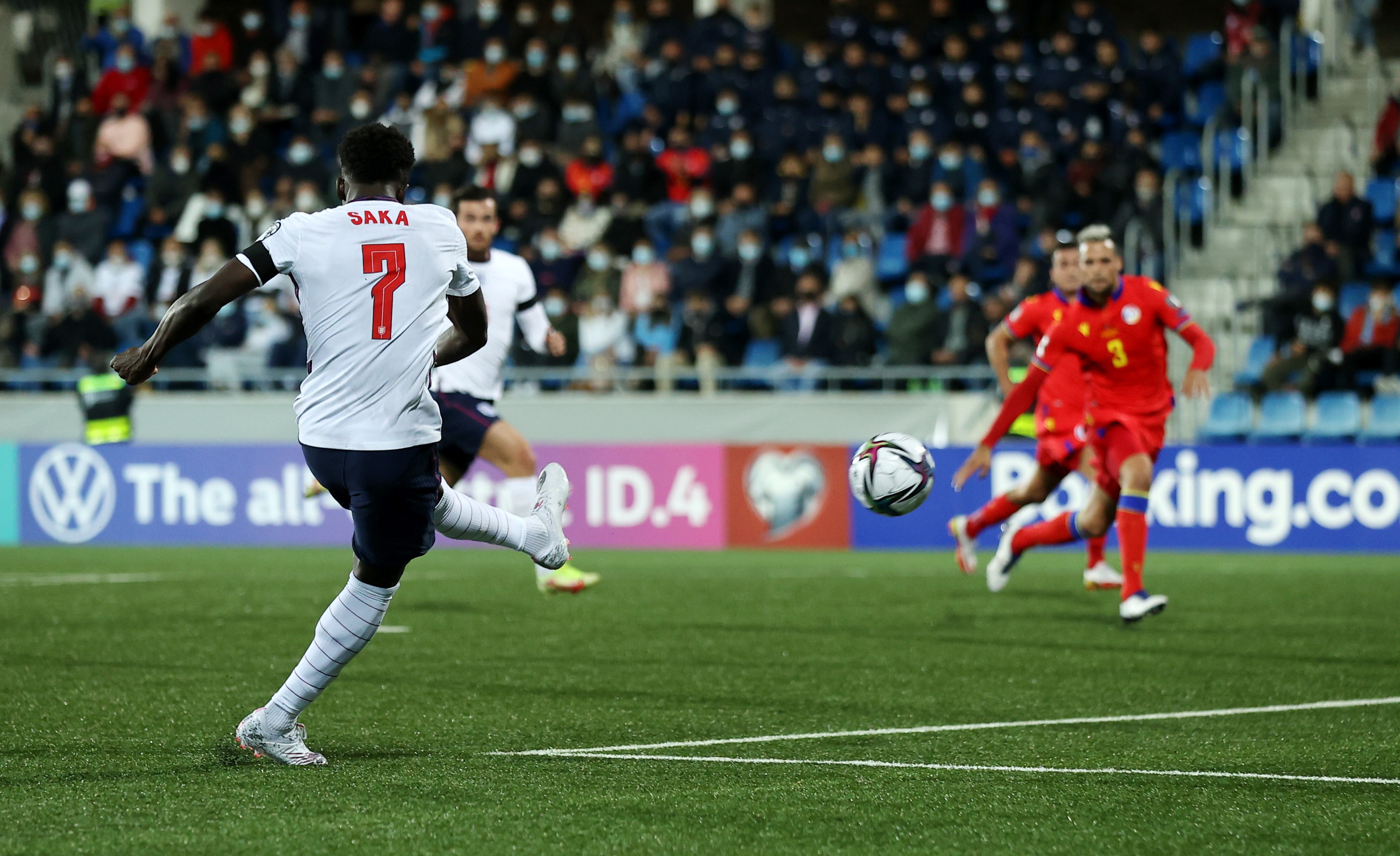 Bukayo Saka made it two before the breakCredit: Getty 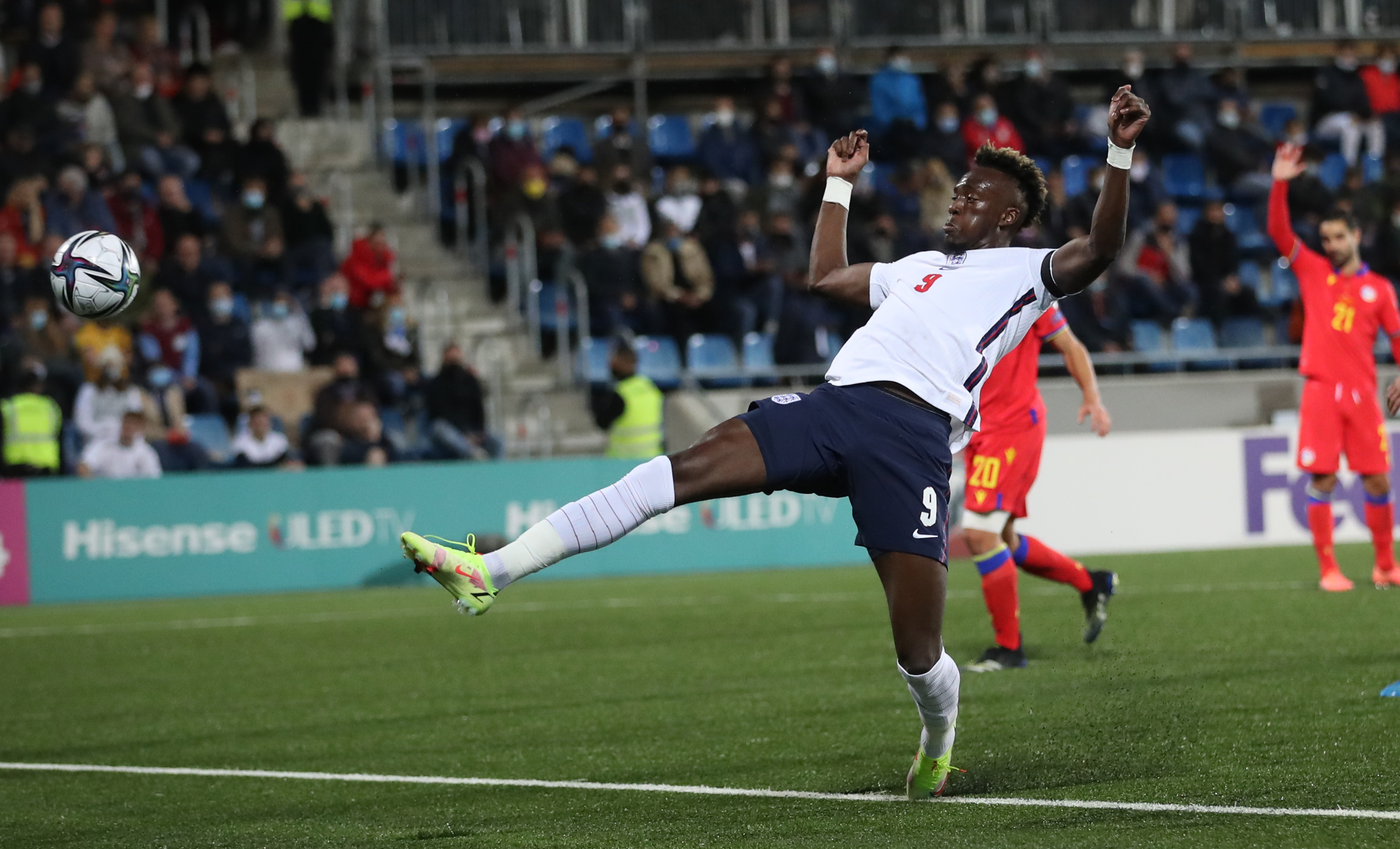 The offside flag had been raised against Sancho and it was so tight that video assistant ref Stephanie Frappart took a long time to overrule her on-pitch colleague, while the players lined up as if the game would restart with a free kick.

By the time Kateryna Monzul signalled for a goal instead, the moment of joy really had passed. Chilwell did his best, doing a little run and punch of the air celebration just inside his own half before being mobbed by his team-mates.

Andorra meanwhile were angrily complaining that they wanted to kick off. It was all rather bizarre.

Abraham had two efforts smuggled away in quick succession as England maintained the pressure. An injury to Christian Garcia Gonzalez meant an early introduction for veteran defender and Andorra legend Ildefons Lima.

At 41, he was old enough to be the father of most of the players he would be chasing around. It took its toll and he too went off injured in the second half.

Sancho was warming to his task down the left. It’s not often you can say you’ve nutmegged Jesus, but that’s what the Manchester United winger did to the Andorra right back.

Jesus Rubio Gomez is not to be confused with Jordi Rubio Gomez, who was playing on the left of midfield. 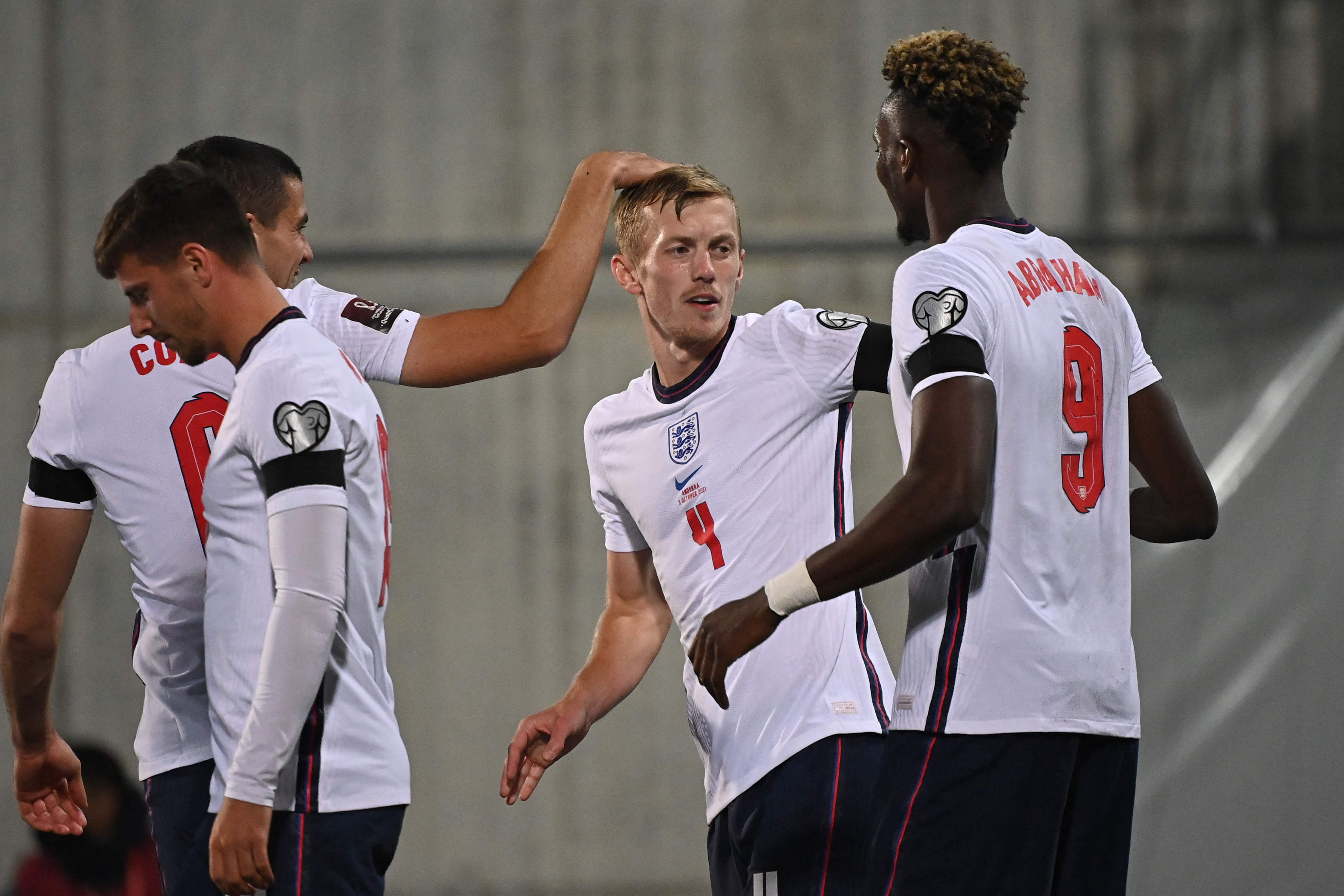 James Ward-Prowse grabbed a fourth after initially having his penalty savedCredit: AFP

But Saka didn’t miss his. Foden was the creative force again with another clipped aerial ball. Saka took one touch and gave it the finish it deserved.

Tempers were starting to fray. John Stones and Cristian Martinez Alejo were booked for a bit of pushing and shoving deep in the England half, while at the other end Sancho was shown a yellow card for kicking the ball away.

When Jesus fouled him again and stood over him telling him to get up, Sancho took real offence and set off to confront his opponent as they left the field at the end of a reasonably eventful first half.

Conor Coady quietly made his way over to make sure his young team-mate did not do anything silly.

England should have been further in front soon after the break, but Jesse Lingard and Chilwell were off target with headers.

No matter. Sancho whipped in a fine cross and Abraham diverted the ball in with one of his long legs.

Things did not get any easier for Andorra when Foden was substituted.

On came City team-mate Jack Grealish and he was fouled in the box by that man Jesus to give Ward-Prowse the chance to get on the scoresheet, which he did at the second attempt.

Then Grealish surged through the middle and drilled home England’s fifth.

That meant both England’s Manchester-based £100m wingers had played their part, with Sancho showing flashes of the exciting player that Manchester United thought they had signed.

But it was Foden, a player who cost City nothing, that looked priceless.