ENGLAND looked like a team in desperate need of a good lie-down by the time Harry Kane fell into horizontal position in the German penalty area.

But even though they had been outplayed for long periods by a technically-superior German side, England are always in with a sniff when the Tottenham striker is about.

Harry Kane rescued a point for England late on in GermanyCredit: Getty 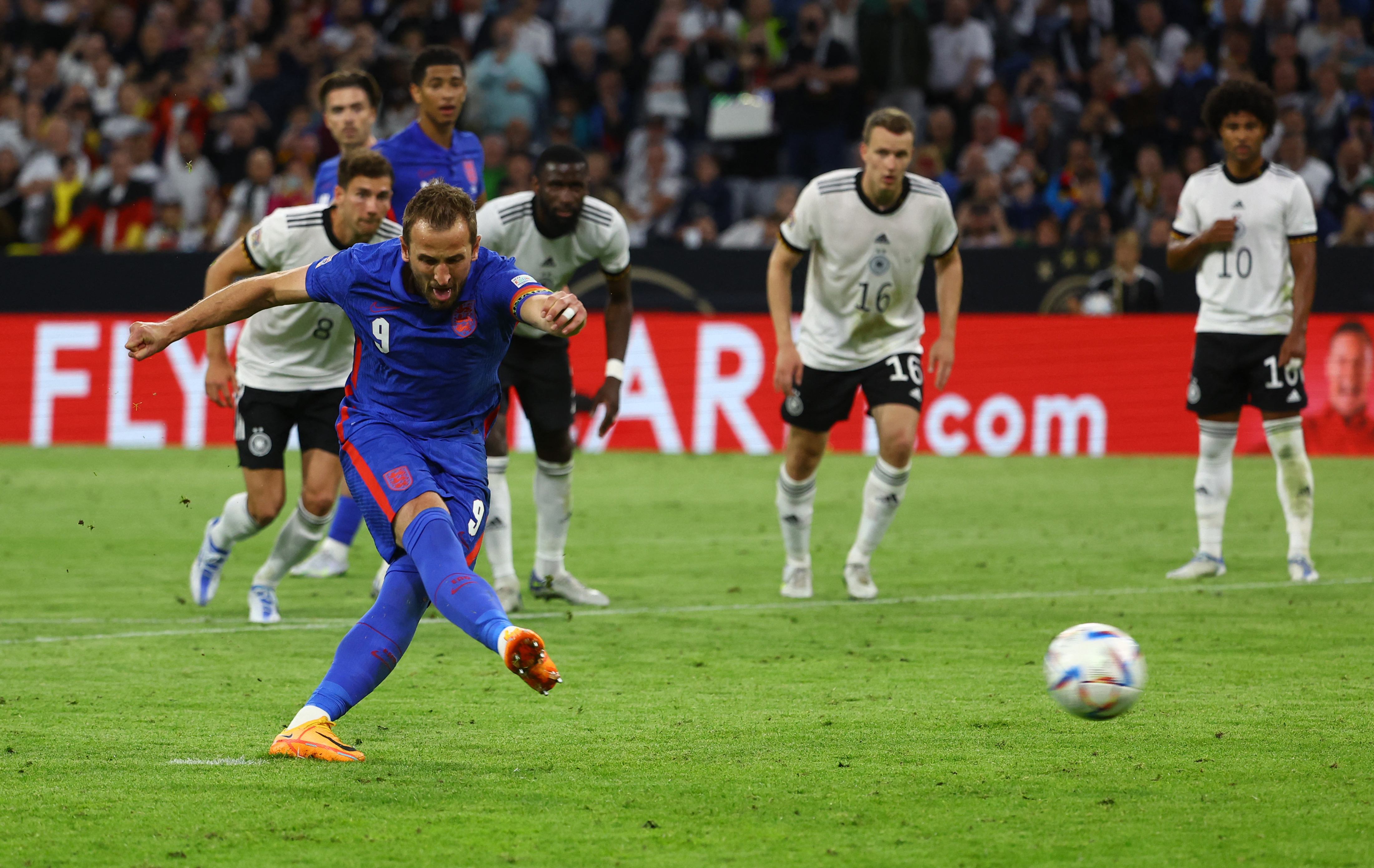 The skipper’s penalty took him to a half century of international goalsCredit: Reuters 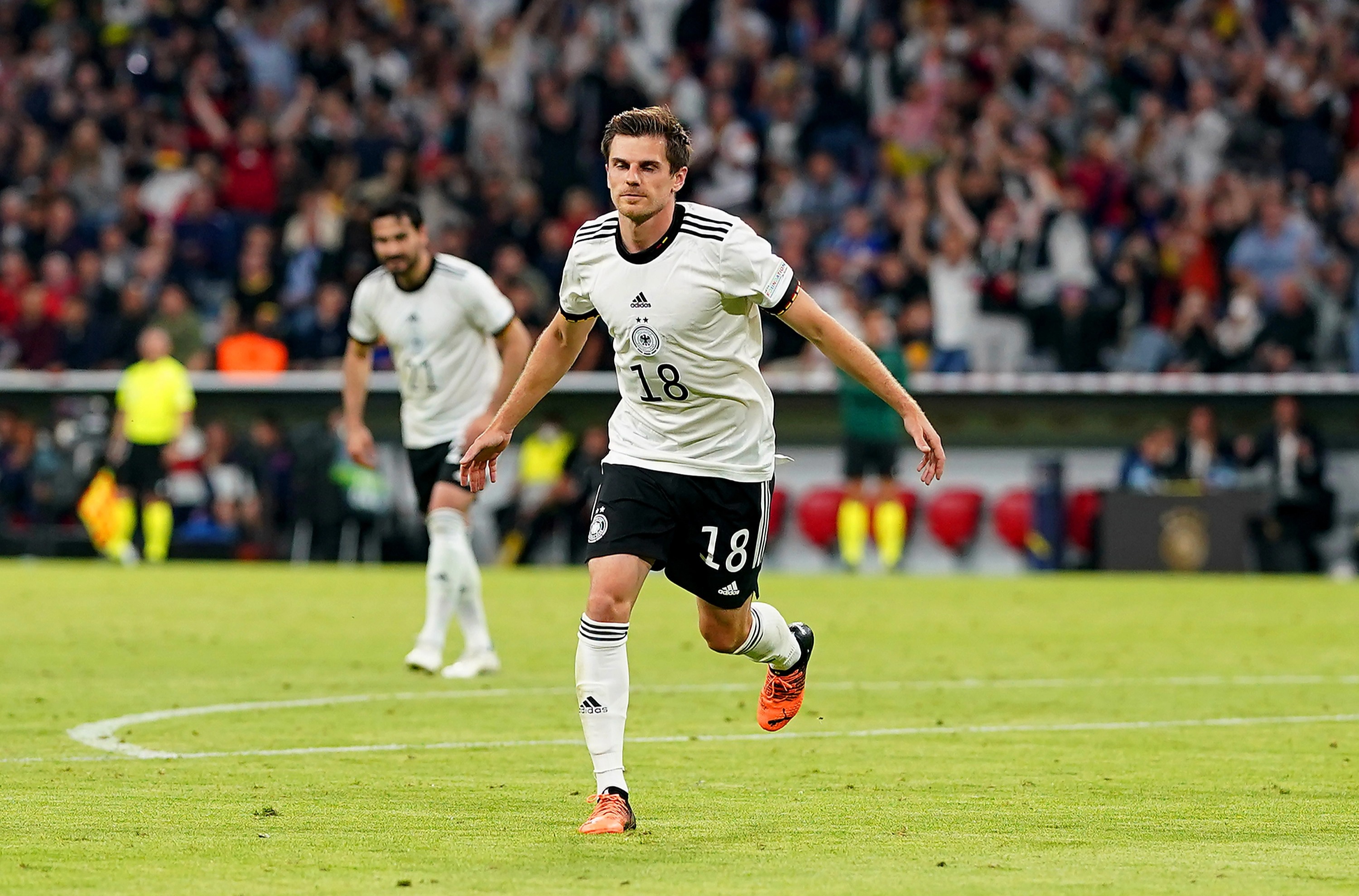 Jonas Hofmann races off in celebration after firing Germany ahead against EnglandCredit: Getty 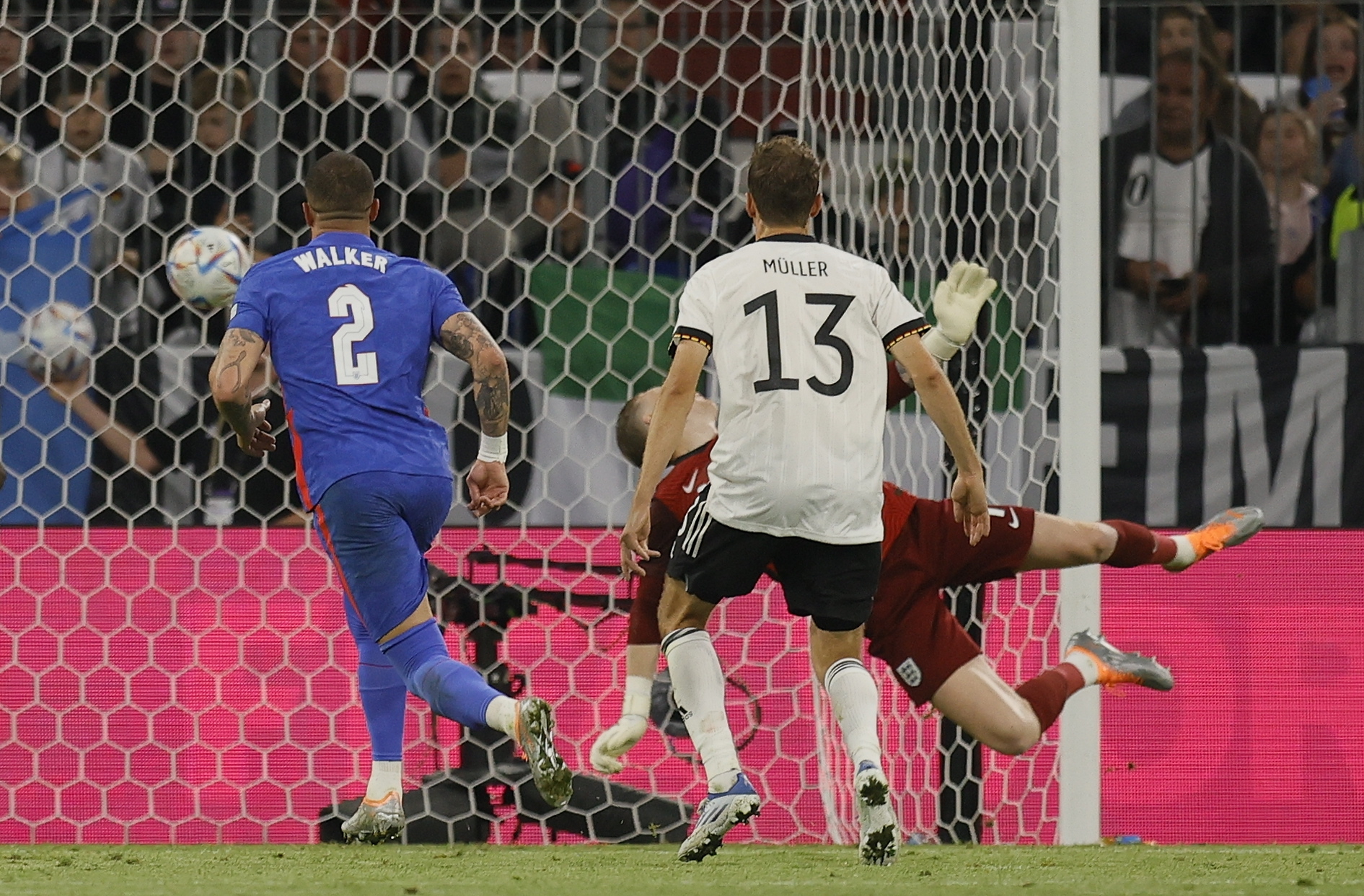 His strike proved too powerful for Jordan Pickford to stopCredit: EPA

Kane ‘won’ the 85th-minute penalty equaliser after contact with Nico Schlotterbeck in the way the English used to moan about Jurgen Klinsmann winning them many moons ago.

But as it’s our future Sir Harry we’re talking about, we’ll simply call it streetwise professionalism and revel in a half-century goals from just 70 caps.

It meant that Gareth Southgate’s men avoided the indignity of back-to-back defeats for the first time in almost four years and stops them heading into a potential spiral of negativity five months out from the World Cup. 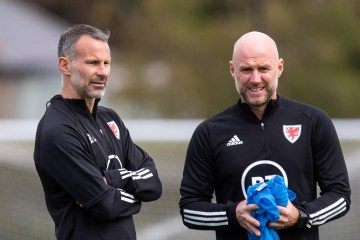 England seem to have regressed individually and collectively since they defeated Germany at last summer’s Euros.

Few of Soutgate’s player had great seasons at club level and they haven’t looked convincing too often since that penalty shoot-out defeat by Wembley.

But they have Kane – Golden Boot winner at the last World Cup and a man who never seems to know when he is beaten and always knows where the goal is.

It took a VAR check to award Kane his spot-kick but he sent Manuel Neuer the wrong way and Southgate’s men were off the hook and off the mark in this Nations League campaign.

It wouldn’t have felt right if England had strutted into Germany full of bravado after that Euros victory which ended Joachim Loew’s long reign in charge of Die Mannschaft.

So Saturday’s balls-up in Budapest at least dampened any over-confidence for Southgate’s side.

It came as a pleasant surprise that there was only very limited trouble in the city earlier in the day and the Germans treated their visitors to a pre-match blast of Football’s Coming Home – an anthem they had adopted themselves after winning Euro 96.

The atmosphere was so subdued, it felt as if the Germans had handed out free tickets to tens of thousands of librarians.

The German team were, in effect, playing in drag – wearing their women’s team kit as a show of support for their female counterparts before this summer’s Euros in England.

Southgate sent out his A-listers – including ten of the starting eleven who had beaten Germany last summer – but reverted to a flat back four, all of whom struggled.

England made a shoddy start, Kieran Trippier conceding a corner with a shocking back-pass and Kyle Walker having to hack off the line from Josh Kimmich.

An early Harry Kane shot stung Manuel Neuer’s hands – but the Germans were frequently passing their way slickly through the England lines with shades of Bloemfontein in 2010.

Bayern Munich teenager Jamal Musiala – German-born but English-raised and an Under-21 international for the Three Lions – really does like the one who got away for Southgate. 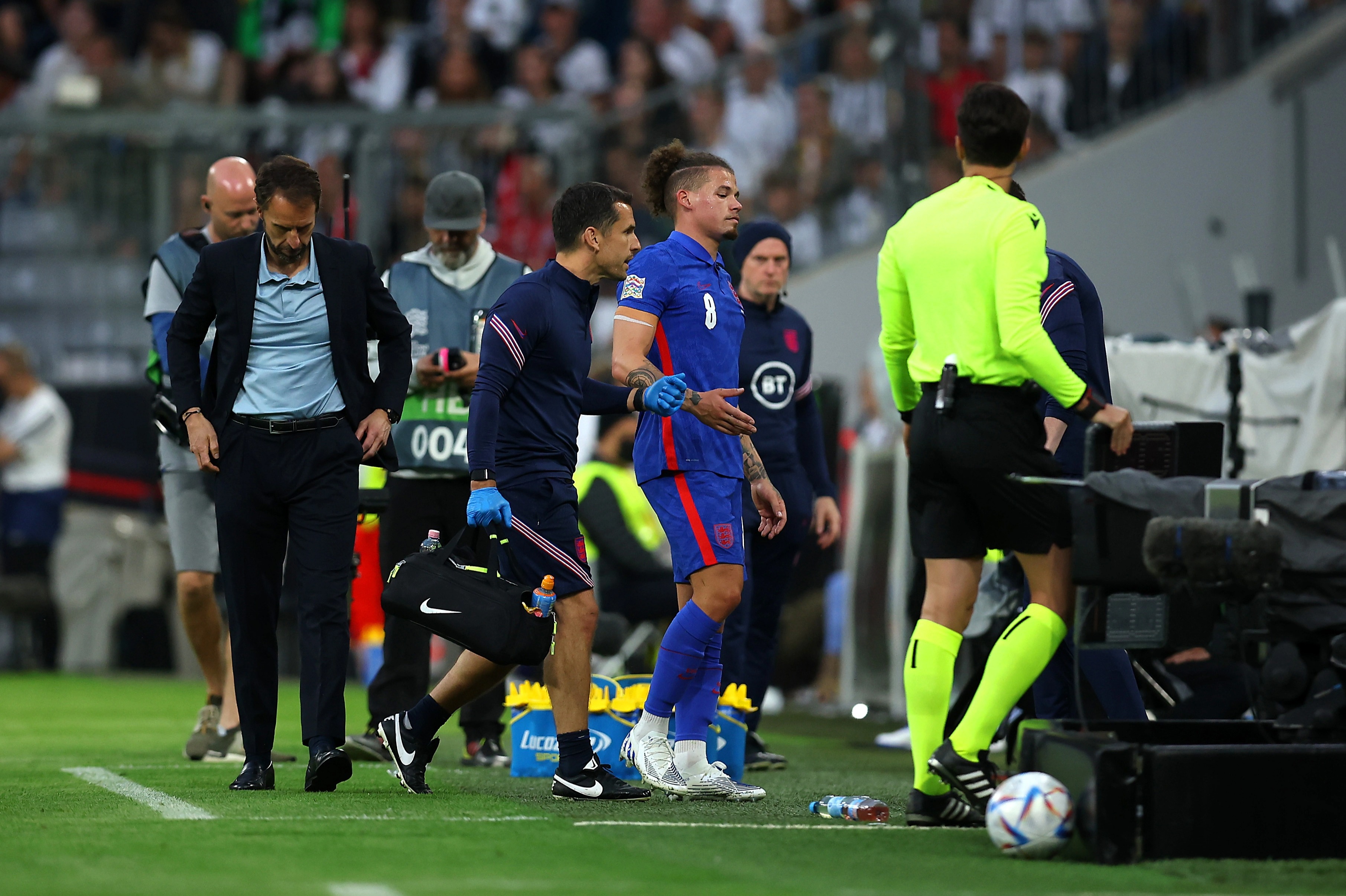 Kalvin Phillips was forced off through injury early on for EnglandCredit: Getty 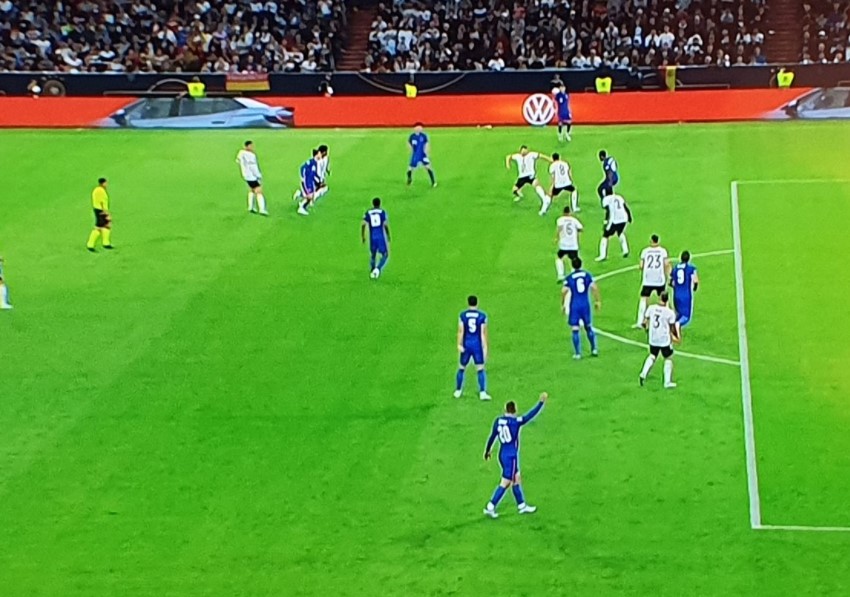 VAR showed that Kane was just onside as the ball came in before the foul for the penaltyCredit: Channel 4 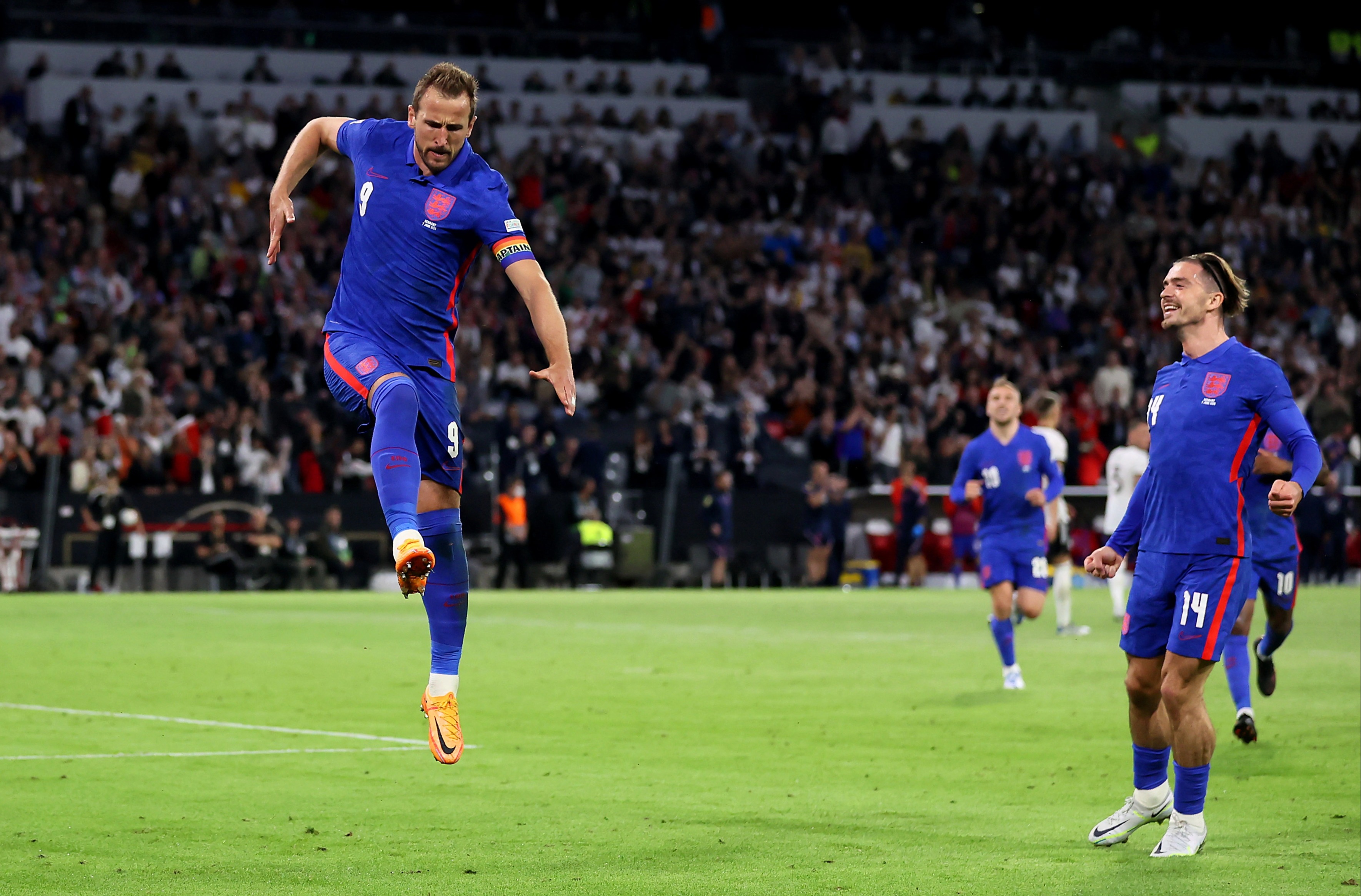 He made no mistake as he moved to within three goals of record scorer Wayne RooneyCredit: Getty

The kid has outstanding feet in tight spaces, he looks as though he could nutmeg an octopus inside a telephone box, and England couldn’t handle him.

Twice in the opening 25 minutes, the hosts had the ball in the net but neither counted.

First, when Kalvin Phillips went down injured and England kicked the ball into touch, Germany didn’t stand on ceremony and Thomas Muller netted but referee Carlos del Cerro Grande was having none of their skulduggery.

Phillips had to limp off and was replaced by Jude Bellingham but soon a long ball over the top embarrassed Harry Maguire, who was trying to wrestle Kai Havertz, while Jonas Hoffman strode through and slotted past Jordan Pickford, only to be frustrated by a narrow offside decision.

England did have their moments though – Kane blazed over from close range when Manuel Neuer flapped at a Trippier corner and Saka had a shot beaten away by the German keeper during an inexplicable eight minutes of first-half injury-time.

It was remarkable that the first half ended goalless, with neither defence looking convincing.

England had barely touched the ball in the opening five minutes of the second half, when Germany scored.

It was a lengthy, classy passing move which pulled England one way, then the other, and ended with a cute Kimmich pass feeding Hofmann, who rammed it past Pickford.

Almost immediately, Mount had a powerful shot pushed away by Neuer – but the Germans were still dominating possession and Pickford made a smart near-post save from Muller.

Jack Grealish’s arrival livened up England – and Neuer soon made fine saves to thwart a Maguire header and a Kane lunge at the far post.

And when Kane fell after a nudge and a slip from Schlotterbeck, he made no mistake with the spot-kick which allowed him to raise his bat for a half-century of international goals.