ARSENAL produced an encouraging performance despite defeat as they went toe to toe with Premier League leaders Manchester City at the Emirates.

The feisty affair may have woken a few from New Year’s Day slumbers, as the Gunners proved that they will no longer be a walkover for sides like Pep Guardiola’s.

Mikel Arteta, absent due to Covid-19, will have watched on proudly from home as his team produced nearly an hour of brilliant, energetic football to lead City – before a maddening sequence of events saw Riyad Mahrez equalise from the spot – with Gabriel Magalhaes sent off just two minutes later.

After ten-man Arsenal were left heartbroken by a stoppage time Rodri winner, here’s how SunSport’s Etienne Fermie rated each performer.

Nearly caught flapping at an early cross, only for Ruben Dias to miss the target.

England international then had surprisingly little to do, and was helpless for Rodri’s late winner.

Japanese star was a welcome returnee for the Gunners and wasn’t afraid to get physical with the likes of Raheem Sterling and Kevin De Bruyne when attacked.

Takehiro Tomiyasu used all of his defensive smarts to mostly thwart City, while also providing one or two decent crosses. 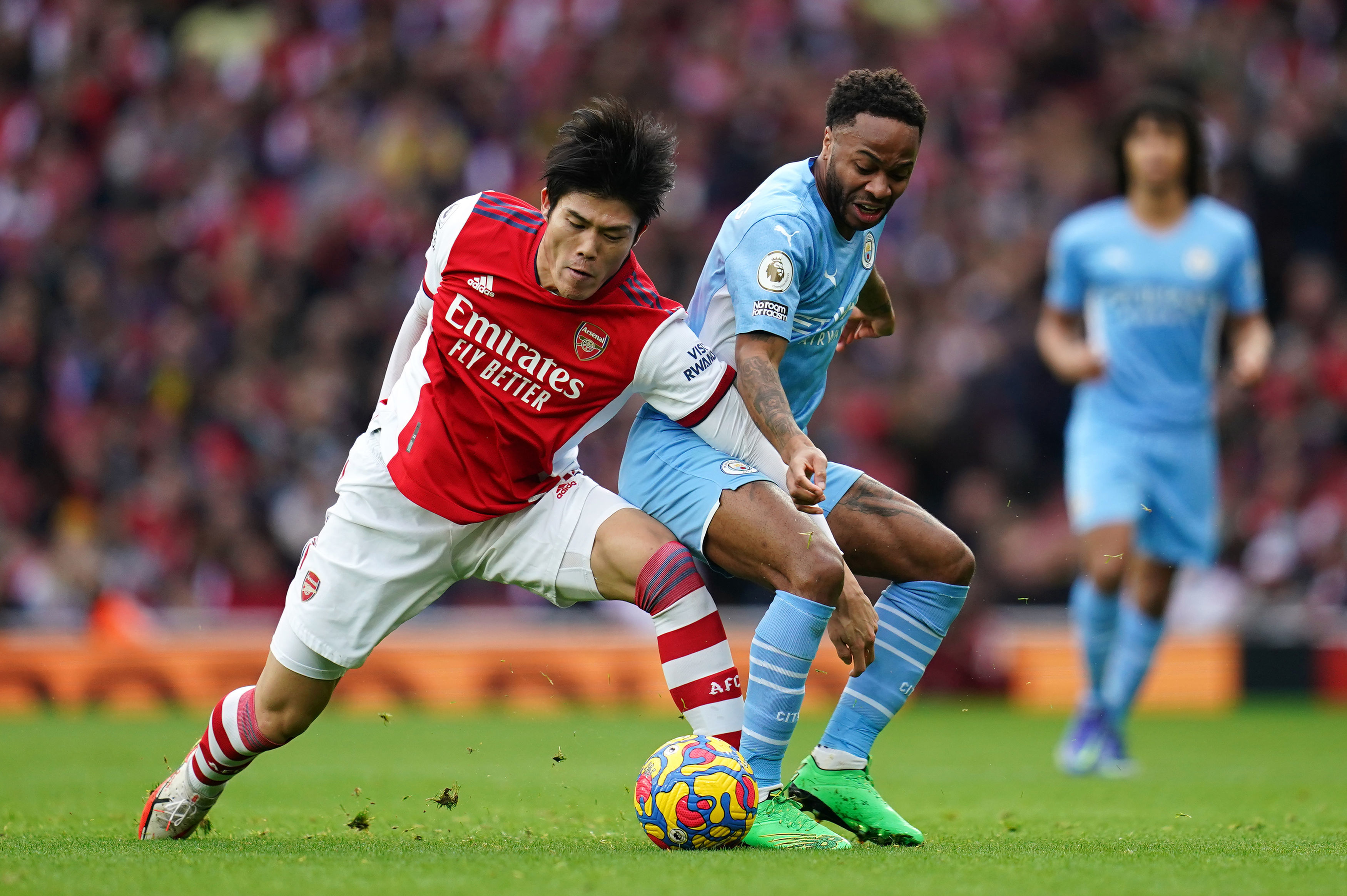 Defender produced some excellent distribution from the back, most notably clipping an impressive lofted pass in-behind.

Remained mostly unruffled under pressure even when his side were a man down.

Good intervention to thwart Sterling early on and had looked comfortable in the first half.

Lost his head after City’s equaliser and was booked for scuffing the penalty spot, before needlessly clattering Gabriel Jesus on the half-way line moments later to earn a second yellow and his marching orders in the 60th minute – costing his team the game. 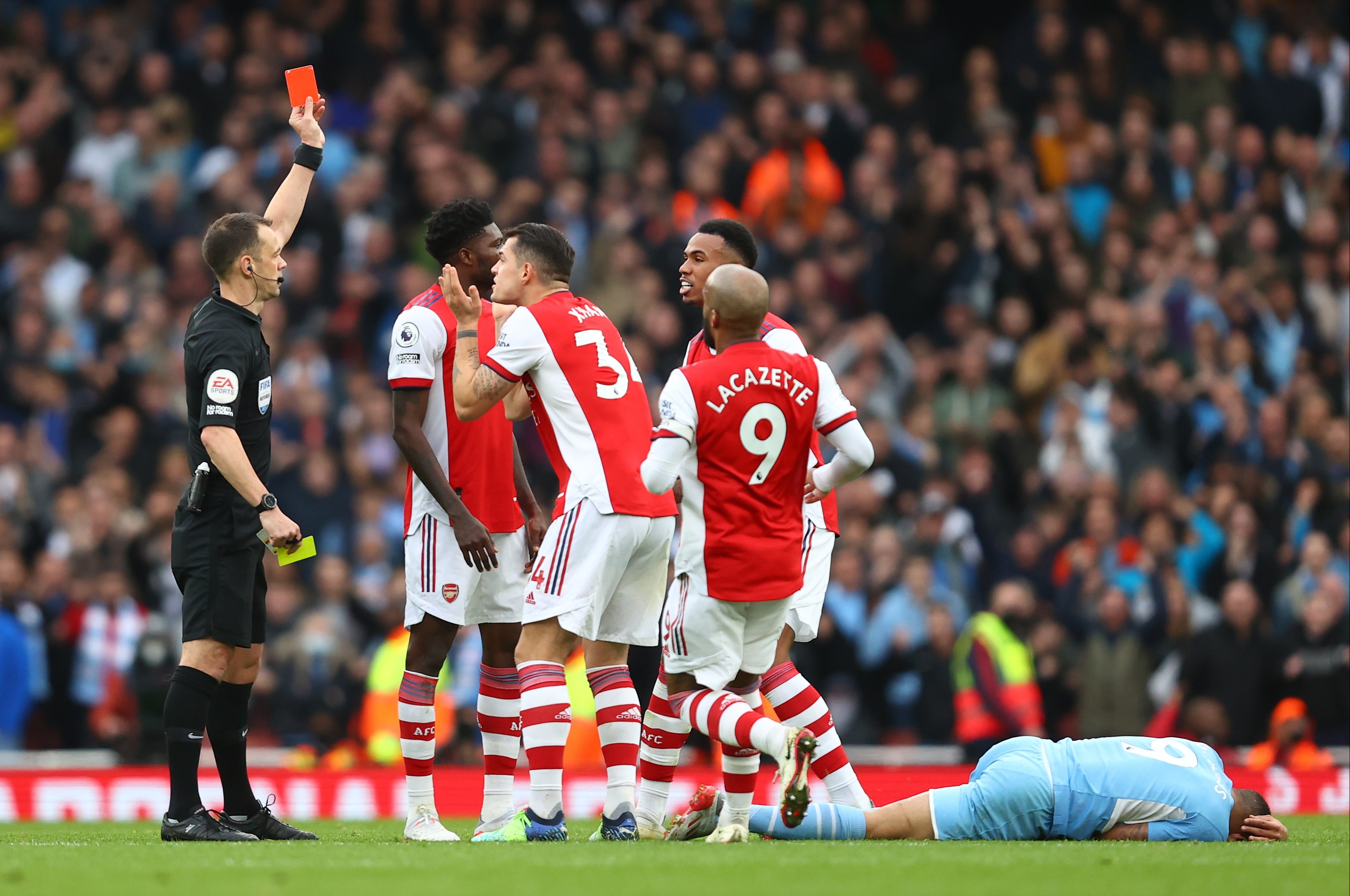 Brazilian was red carded after leaving Gabriel Jesus in a heapCredit: Getty

Slid a smart pass over to Bukayo Saka for Arsenal’s opener. Scot was on hand as usual to scurry down the left flank and cause problems

Stood up to the tricky Riyad Mahrez all afternoon.

Conjured a brilliant nutmeg on Bernardo Silva before playing Gabriel Martinelli through.

Ghanaian was everywhere, producing invaluable interventions and setting Arsenal on their way with arguably his best performance for the Gunners. 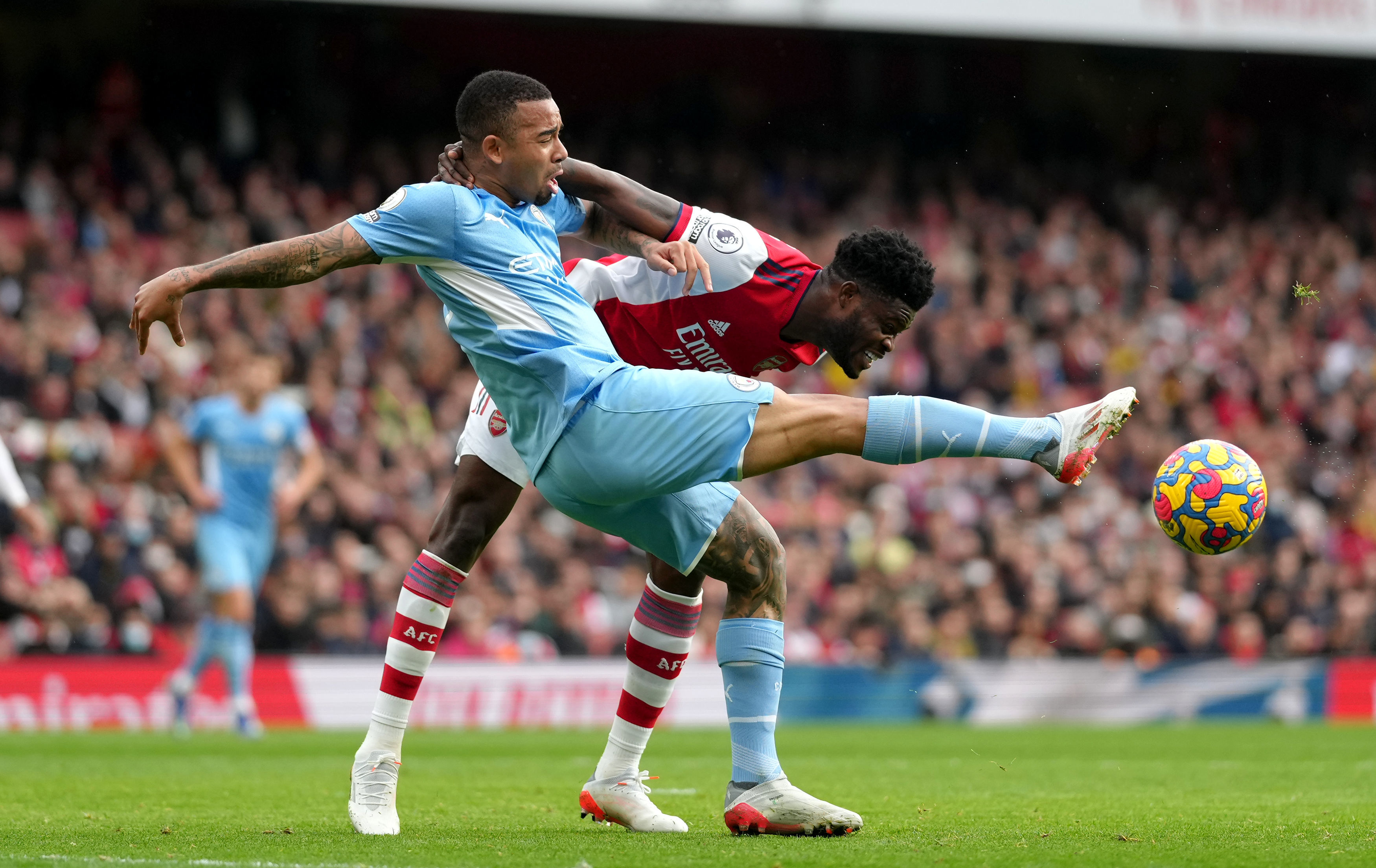 Thomas Partey put his head where it hurts for his teamCredit: PA

Swiss former captain was sent off in disgrace during August’s 5-0 defeat at the Etihad.

But things had been going so well here… until he fouled Silva in the penalty area, for which he was booked – with Mahrez equalising from the spot. 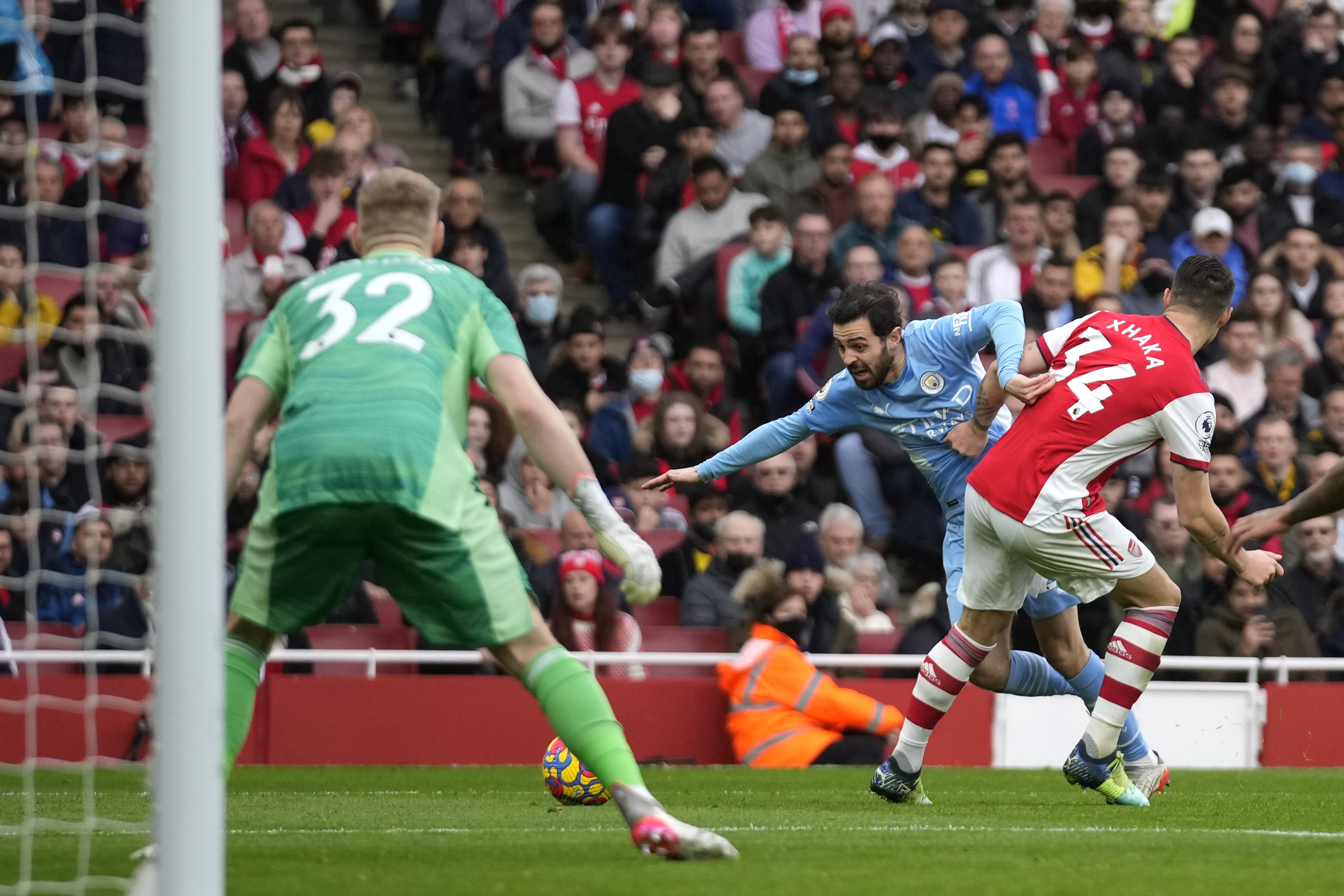 Slid the ball brilliantly beyond Ederson to give the Gunners a 31st minute lead. England international Saka was a constant threat down the right flank, causing Nathan Ake a number of headaches.

Booked for dissent not long after Arsenal went down to ten men. 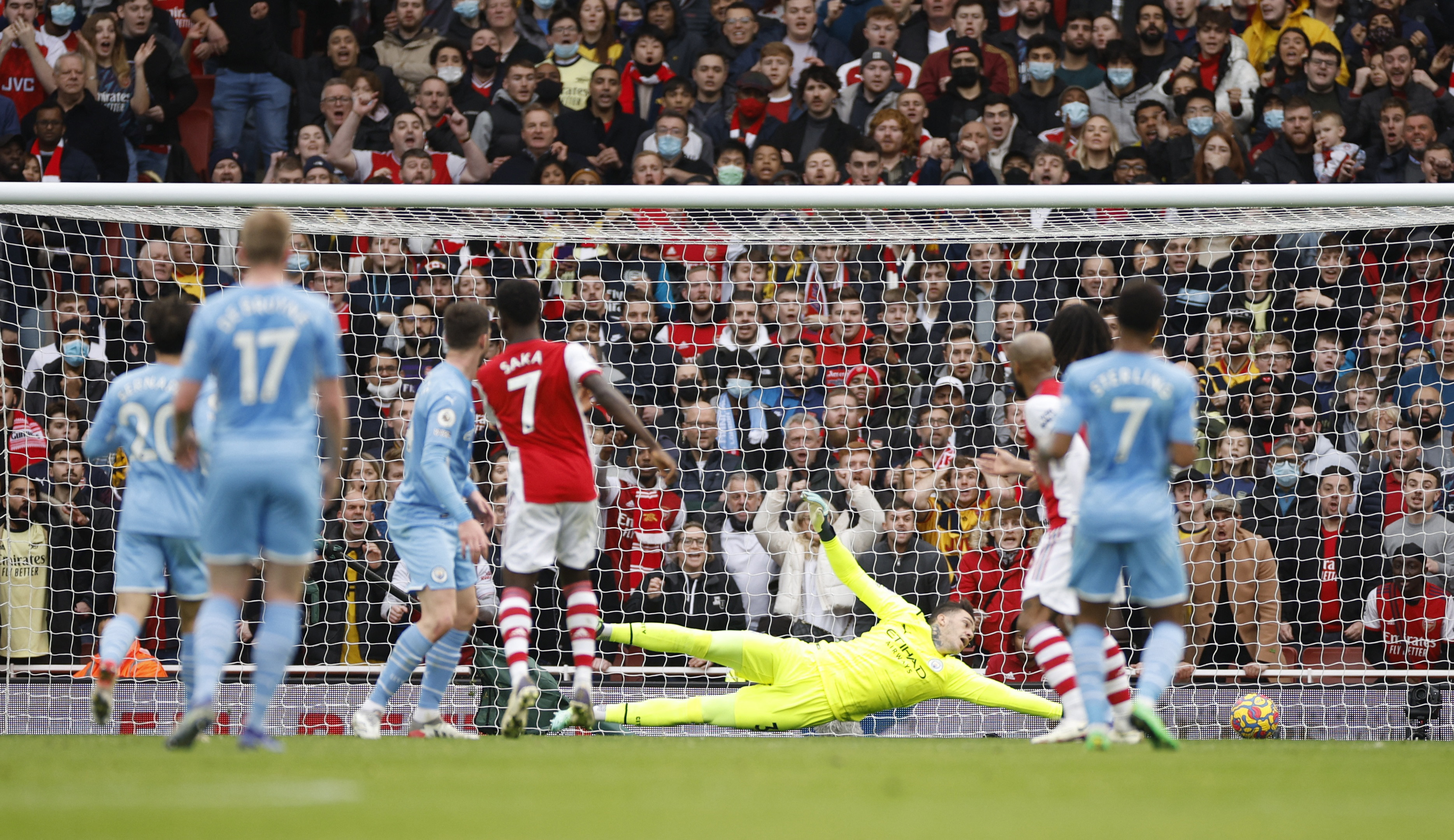 Brought down by Ederson in the box in the 10th minute, only to be ignored by VAR. Norwegian is starting ahead of Emile Smith Rowe at at the moment and justified his selection with a smart performance knitting things together for his team.

Was substituted for Rob Holding after Gabriel’s red card.

Remarkable velvet control set up a dangerous early attack. Denied by Ederson when one-on-one shortly after.

Martinelli then fluffed a huge chance after Nathan Ake’s goal-line clearance had spared City’s blushes. He was a constant threat but should have converted at least one of his numerous chances. 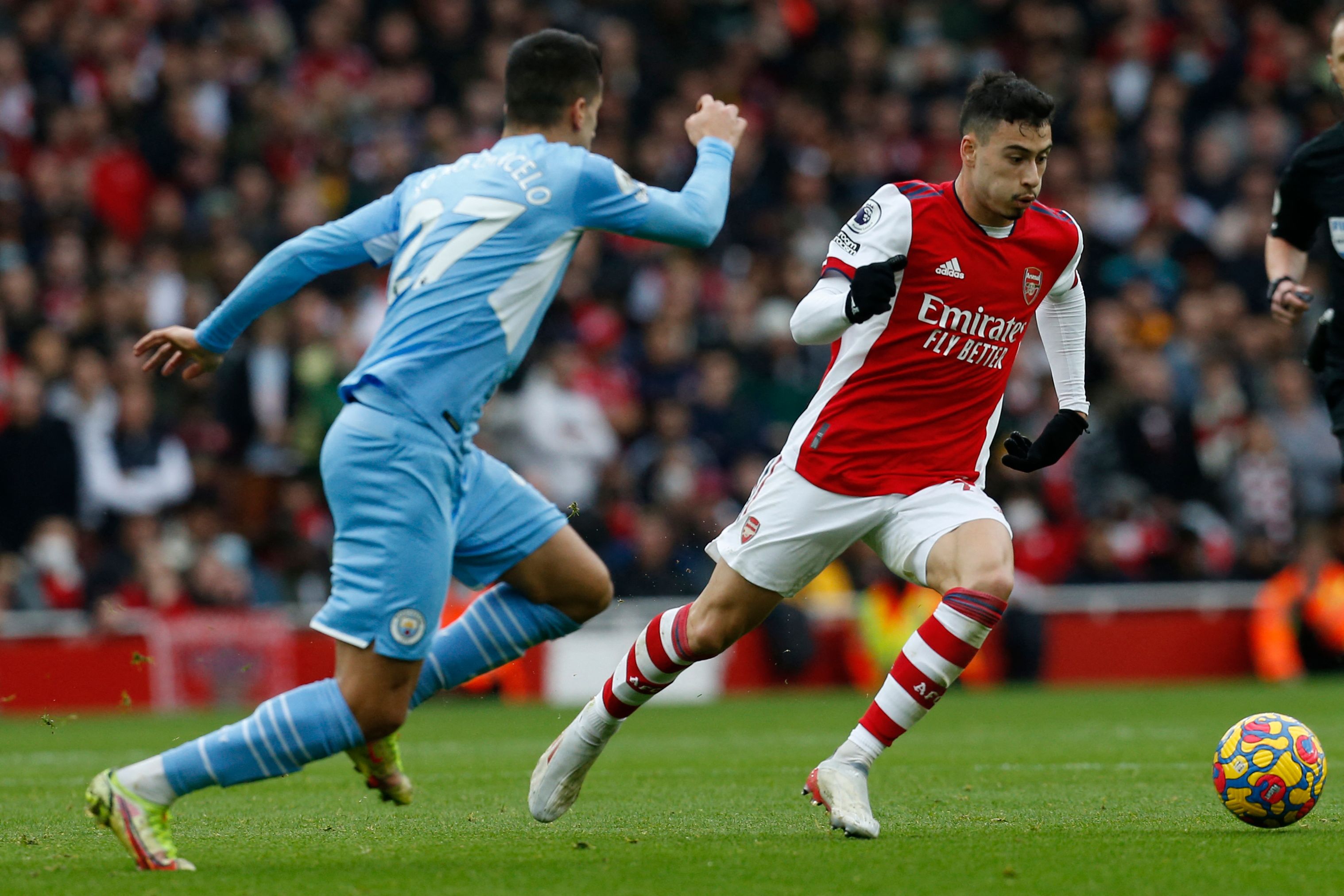 Skipper never gave City’s back line a moment’s peace. His energy and work rate set the tone from the front.

Frenchman couldn’t quite sniff out any chances to score and was replaced by Emile Smith Rowe in the second half.

Booked shortly after coming on for fouling Kevin De Bruyne and stopping a counter attack. Defended manfully for half an hour.

Worked hard but faced an uphill battle to change the game after Gabriel’s red.

Didn’t have enough time to make a huge impact.