FULHAM chief Tony Khan delivered a sizzling blast at Deliveroo after failing to see the funny side of their relegation joke.

The cheeky takeaway firm poked fun at the newly promoted side’s Prem opener next season — at home to Liverpool.

Vice-chairman Khan, son of owner Shahid, hit back: “I suspect that we’ll be in business and thriving long after you wind down.”

Deliveroo tried to make peace by offering free credits for a takeaway.

They said: “Fair play, Tony. We got this one wrong. As an apology, the first 40 Fulham fans to use UPTHEFULHAM get free credit on us.” 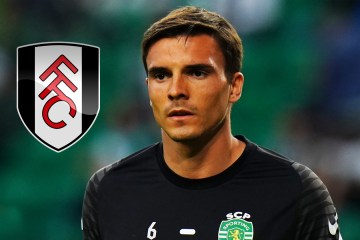 It is not the first time Khan has been in a heated Twitter exchange.

He ruffled ex-Fulham boss Scott Parker’s feathers by apologising for a 3-0 home defeat by Aston Villa in September 2020 during their last Prem campaign.

Khan promised “better efforts from this squad”, to which Parker hit back and said: “I just don’t agree with that. You don’t need to apologise for the performance.”

Khan also tweeted a fan “go to hell” for criticising his running of the club.

Meanwhile, Fulham are set to complete the signing of forward Manor Solomon from Shakthar Donetsk.

All sides are hopeful that the £7million deal for the 22-year-old is close to completion as Cottagers boss Marco Silva looks to prepare for life in the Premier League.

Silva has lost star man Fabio Carvalho after the ace agreed a move to Liverpool before the end of the season, meaning the west Londoners needed to add some more firepower following their promotion back to the top flight.

And former Everton and Watford boss Silva is hopeful that Israel international Solomon will do just that.

Solomon had bagged four goals and two assists last season before Ukrainian football was brought to a halt following Russia’s invasion of the country.

The winger has six international goals and eight assists in 31 appearances for Israel.