HARRY KANE thought he’d given Tottenham the lead against Chelsea, and so did most of social media, until referee Paul Tierney cut his celebrations short.

England captain Kane collected a low cross from Ryan Sessegnon, before turning and firing past Chelsea goalkeeper Kepa Arrizabalaga in his side’s 2-0 defeat.

Kane was penalised for an arm in the back of SilvaCredit: Sky Sports 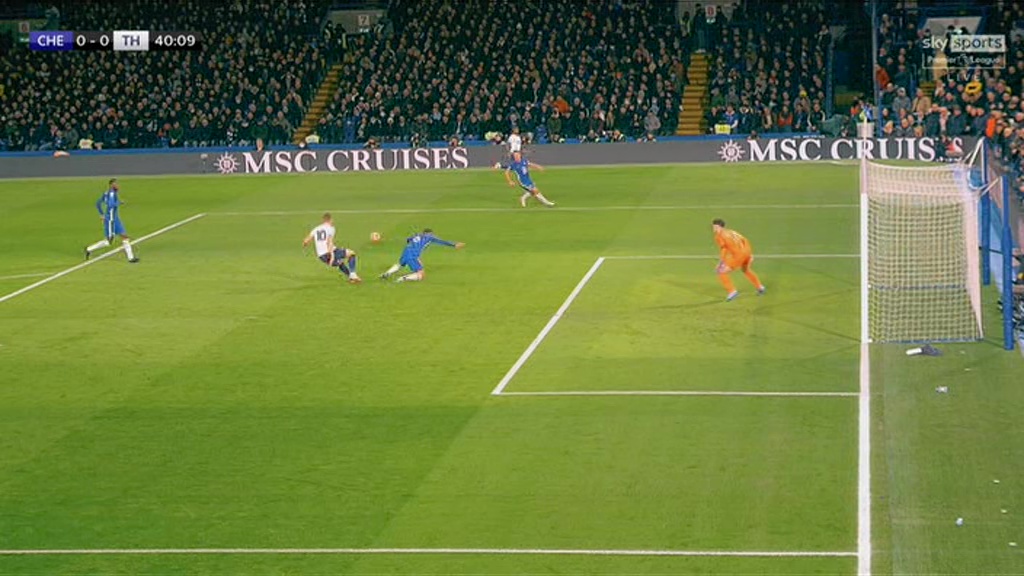 The Tottenham striker left Silva on the deck, before firing into the back of the netCredit: Sky Sports

Tottenham have the ball in the back of the net, but it’s been disallowed for a push by Harry Kane in the build-up! pic.twitter.com/m1PxdnIl54

The only problem though was Tierney spotted a foul in the build-up to the goal.

As Kane controlled the ball from Sessesgnon, the striker put an arm on Thiago Silva’s back before coolly slotting into the back of the net.

That arm was judged to have been a push, as Silva was sent sprawling to the floor.

Gary Neville though was left in disbelief at the decision, saying on punditry duty for Sky Sports: “That is not a foul. No chance.

“I mean look there’s an arm there from Harry Kane, but that is not a foul for me.”

And fans on social media agreed, as one fumed: “The game is gone if that’s a foul.”

While another said: “Harry Kane has been robbed of a goal.”

It came after Liverpool were awarded a controversial penalty earlier in the day during their game against Crystal Palace, and fans on social media lamented both decisions.

In response to the Kane foul, one supporter claimed: “That’s a worse decision than the Liverpool pen. Sick of this officiating that’s ruining the game.”

Specsavers too joined in on the banter, as they wrote on Twitter: “50,000 likes and we’ll change our name to SpecsaVARs.”

The Kane controversy followed another contentious moment at Stamford Bridge, as Matt Doherty escaped a red card for a nasty looking challenge on Malang Sarr.

Arsenal fans too were left seething during their 0-0 draw against Burnley after an Ashley Westwood stamp on Kieran Tierney wasn’t punished with a red card.

However, Roy Keane reckoned Kane was rightfully penalised for the challenge on Silva, disagreeing with his old Manchester United team-mate.

He said: “Believe it or not Gary’s [Neville’s] wrong.

“Do you know what I think when you’re running at that pace, at the time when I was watching I thought it was a goal.

“But he just does lean in to him, and I think the referee has got it 100 per cent right.”

Redknapp suggested: “He makes the most of it Thiago Silva, he goes over, he’s theatrical, he’s clever. It is a little bit lucky.”

Hakim Ziyech and Thiago Silva’s second half strikes condemned Spurs to defeat, with Chelsea boss Thomas Tuchel saying on Kane’s strike: “I didn’t see it. Live I thought it was a goal and was surprised.”