Defoe, 39, now a TV pundit, tried to lure the woman for a romp in his Range Rover.

Jermain Defoe is accused of attempting to arrange a hook-up weeks after getting married to Donna TierneyCredit: instagram 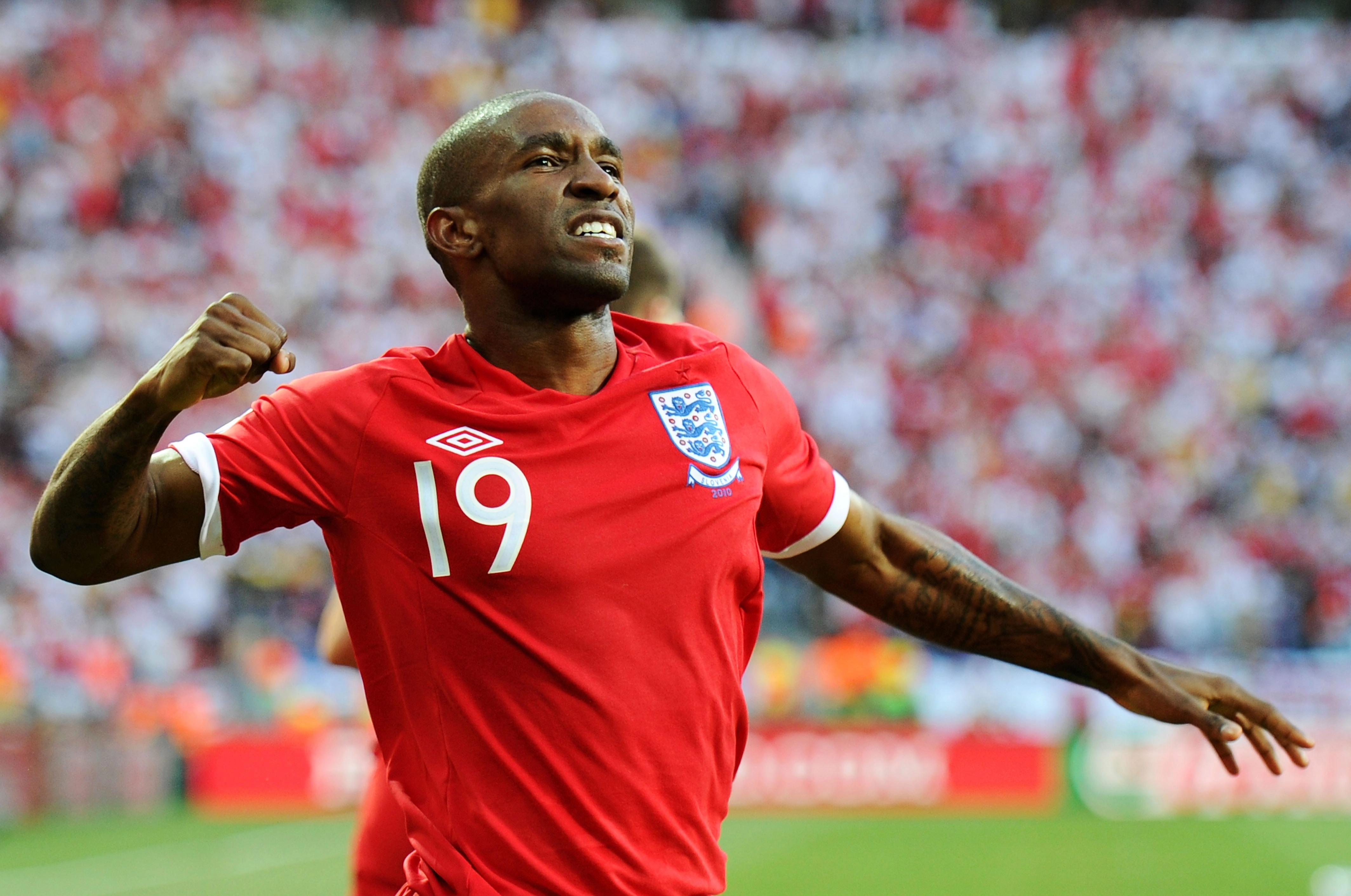 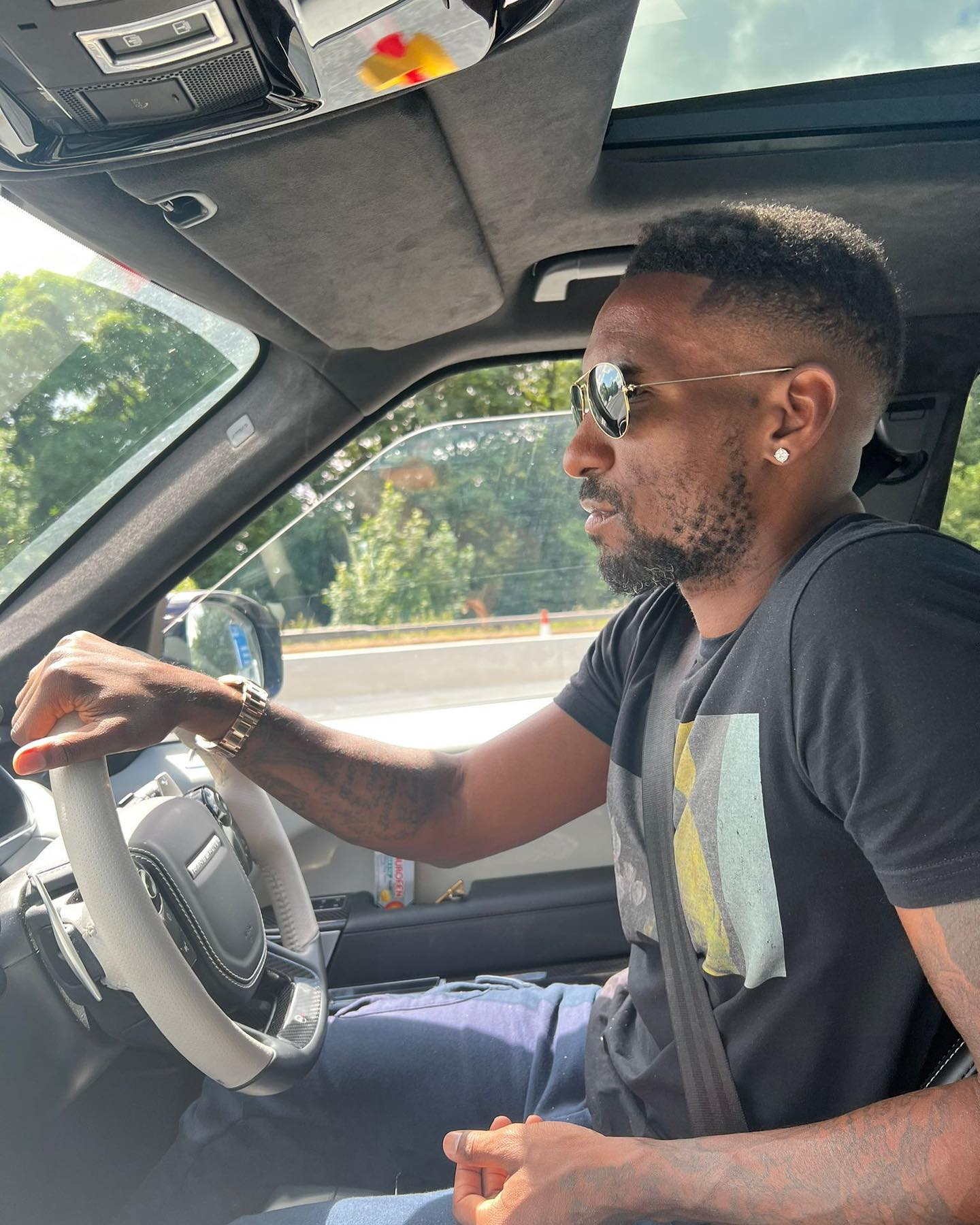 Jermain asked the 40-year-old mum for a romp in his Range RoverCredit: instagram

In the glossy magazine, he said: “This is my future, this is forever, this is the person I want to spend the rest of my life with.”

The event, attended by a clutch of former England stars including Ledley King and Shaun Wright-Phillips, was featured across 14 pages of the June 27 issue. 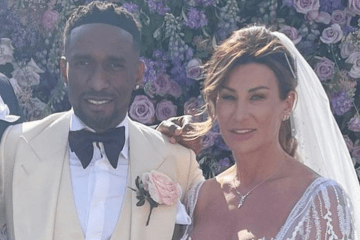 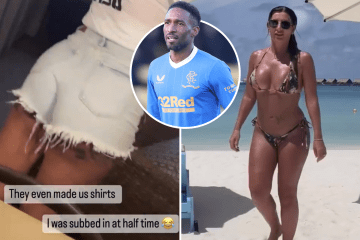 But on July 14, Defoe began messaging the woman, who we are not naming, via ­Instagram and later tried to arrange a meet-up.

She said: “I’d met ­Jermain years ago in a bar, but nothing happened.

“We stayed in touch a bit over WhatsApp but I hadn’t spoken to him for ages.

“Then he started messaging me on Instagram in July. He was desperate to meet me and we flirted a lot.

“But ultimately, he wasn’t very charming — he clearly only had one thing in his mind.

“Then, when I realised he was married, I didn’t want it to go any further.

“It wouldn’t have been fair on his wife. Who on Earth does that so soon after vowing to spend the rest of their life with someone?

“I suppose I felt he was the powerful one, the famous and wealthy former footballer.

“Our messages were a bit of fun at the time, but there was no point in carrying it on.

“I felt like I was wasting my time and once I realised he had a wife, I didn’t want to continue speaking to him.

“It’s not right. I feel really bad about it all.”

On June 21, Defoe gleefully declared on Instagram how ­“dedicating my whole life” to Donna was “one of the easiest things I’ve ever done”. 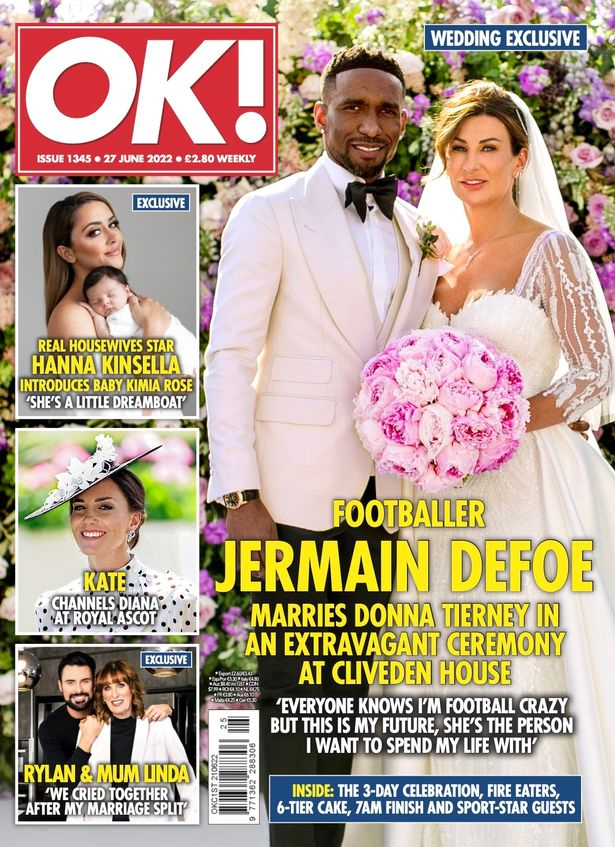 Jermain Defoe’s wedding to Donna Tierney was the front page of OK! magazine

He shared a mock-up of the cover of OK! showing the couple at their luxury Cliveden House wedding — scene of the Profumo sex scandal and where Meghan stayed on the eve of marrying Prince Harry.

Defoe thanked the glossy mag for “showcasing our special day” and excitedly told his 563,000 followers the “full copy is out now”.

In his chat with the magazine Defoe told how he had finally found “the right one” in his new partner.

Beauty therapist Donna spoke of pals talking about “how special” Defoe’s wedding speech was, and that it “showed how much he appreciates me”.

Ironically, he first “met” Donna several years ago by ‘liking’ her pictures on social media — in a similar way to his latest pursuit.

After the wedding, the couple went on honeymoon to the Maldives. 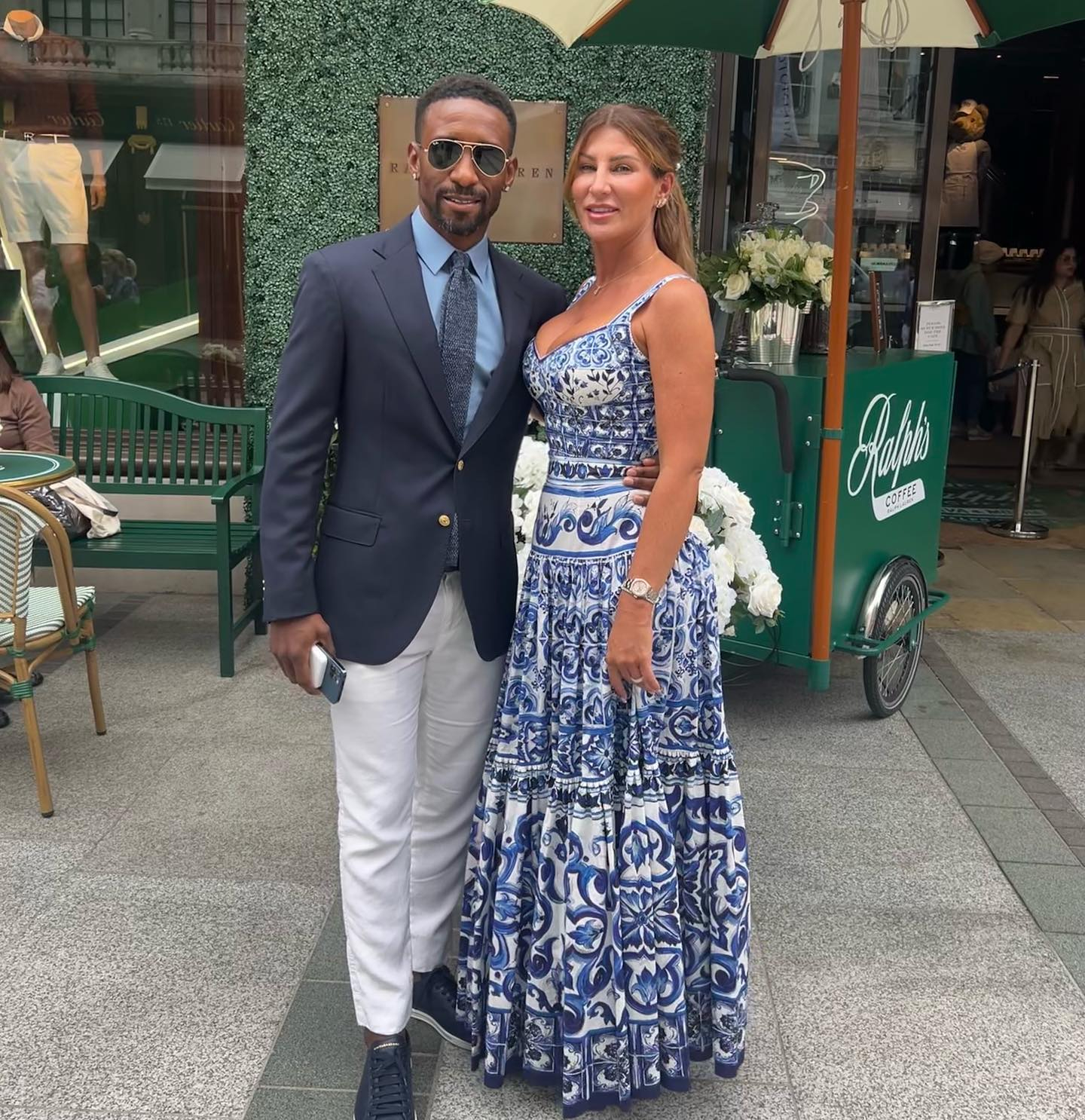 On July 6, the newlyweds posed outside Wimbledon’s Centre Court, with the ace boasting on Instagram: “Really enjoyed watching the tennis today at ­Wimbledon with my wife @Donna_Defoe.”

But in his messages with the woman, which began eight days later, he called her “babe” in voice notes and asked to meet up.

On August 19, he told her he wanted to romp with her in the back of his Range Rover.

Defoe met wife Donna in January 2021 when she asked him for a signed football shirt for a charity do.

The pair hit it off and Defoe proposed at a top Glasgow hotel seven months later.

He spelled out “Marry Me” with lights in their penthouse suite, which he decorated with heart-shaped balloons and rose petals, and got down on one knee.

The pair chose the swanky 376-acre Cliveden House for a three-day wedding extravaganza, after Defoe read Meghan had stayed there.

He wore a three-piece off-white suit, black trousers and a bow tie, and said his “eyes just started welling up” when he saw Donna approaching the altar.

Among their 360 guests were Defoe’s pals Ledley King, Shaun Wright-Phillips and Carlton Cole.

Their first dance was to Luther Vandross’s Always And Forever. The celebrations lasted until 7am and included fire-eaters, flamethrowers, a Caribbean buffet and a makeshift nightclub.

Last Wednesday, Defoe — who scored 20 goals in his 50 caps for England — was at Wembley for Channel 4’s coverage of the Three Lions,  alongside host Jules Breach, and ex-players Joe Cole and Thomas Hitzlsperger.

Defoe, known for his charity work, has previously been dogged by cheating rumours — including on his singer ex Alexandra Burke.

He was also accused in 2017 of causing the break-up of radio presenter Ben Weston’s marriage, months after he bought a hot tub from his saleswoman wife Sally.

His agents were approached for comment on the latest claims. 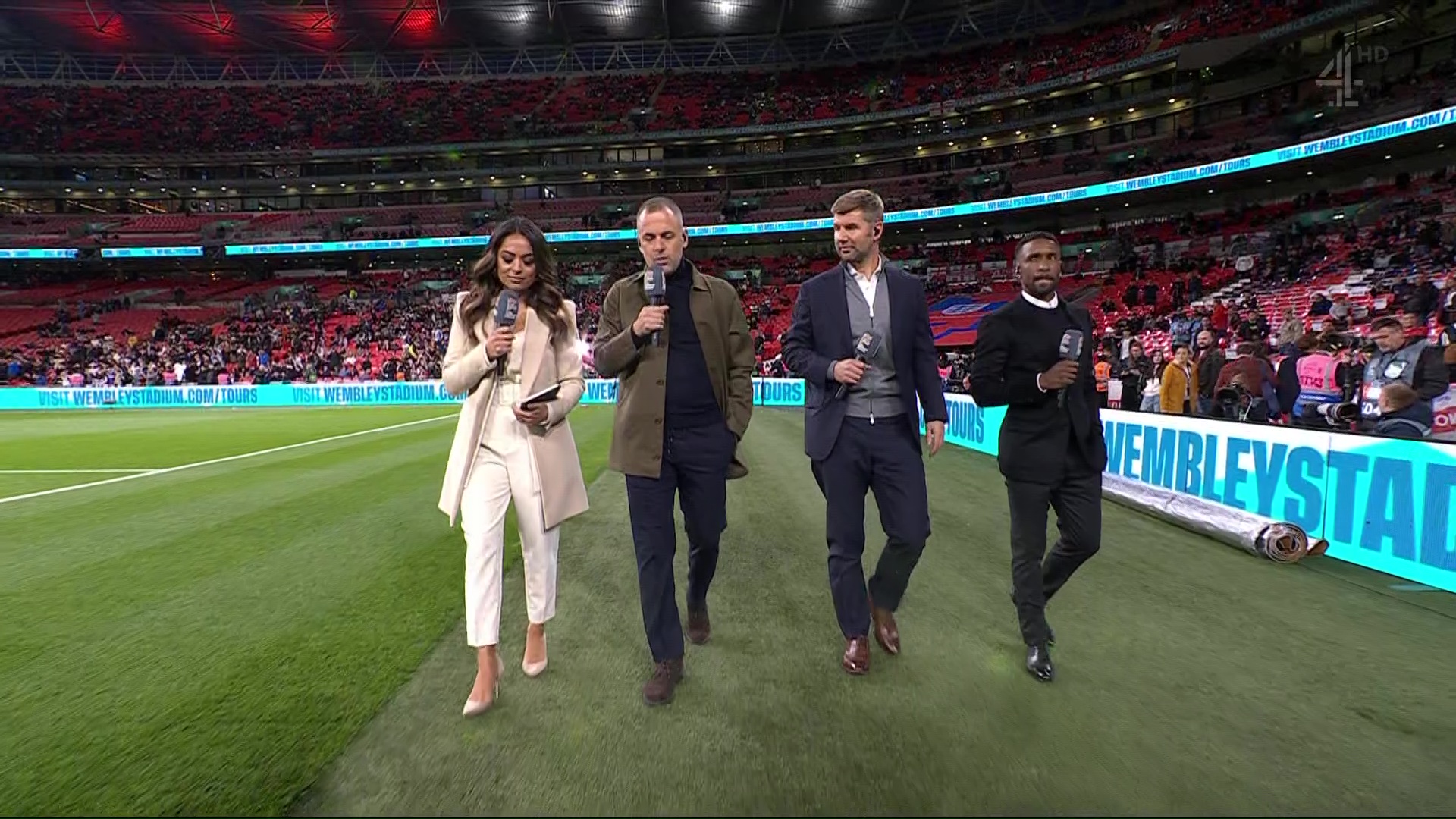 Jermain Defoe was a TV pundit for the England v Germany game this past weekCredit: Channel 4

One of his goals for the Three Lions was at the 2010 World Cup in South Africa against Slovenia.

Defoe had his most fruitful days during two spells at Spurs — scoring 143 goals.

He was awarded an OBE in 2018 for his charitable work with the Jermain Defoe Foundation.