Looking back five years, there were not many signs that Finland would soon qualify for their first international tournament. The team did not win a single game in 2016 under Hans Backe, a former assistant of Sven-Göran Eriksson. After a demoralising year – two draws, nine defeats – they turned to Markku Kanerva, who had been caretaker manager twice before.

Not much was expected from the former school teacher, who had represented Finland as a centre-back but had almost no coaching experience at club level. But then something strange happened: Finland started to win games. First they won their Nations League group ahead of Hungary and Greece and then they qualified for Euro 2020 – their first major tournament finals.

The core of the team is very familiar to Kanerva as it is the one that qualified for the Under-21 European Championship in 2009 under him. It took almost a decade for them to fulfil their potential but they have become the best team Finland have had, with a special bond and team identity on and off the pitch.

The Republic of Ireland head coach, Stephen Kenny, hit the nail on the head after his side’s loss to Finland last October: “They are almost like a club team in that they are very certain in their roles.” Kanerva was pleased with the compliment, saying: “It shows that we are using the little time we have together effectively. Many players have been with us for a long time and they know [our] principles. Now we have to concentrate on the little nuances.”

That is a luxury for a national team. There is a joke in Finland that Kanerva is so mad about details that he always finds out where the sprinklers are situated before the game. The formation can often be changed from 5-3-2 to 4-4-2 and the team’s flexibility is one of its strengths. Finland are so organised they can be tedious to play against.

The key is often how the goalkeeper, Lukas Hradecky, and the two centre-backs, Paulus Arajuuri and Joona Toivio, work together and of late that has gone very well indeed. Glen Kamara is the midfield engine while Teemu Pukki is supported by Robin Lod on counterattacks, with Joel Pohjanpalo also capable of scoring.

Team spirit is their main asset. The players are very relaxed in each other’s company and some of them have said meeting the rest of the squad is like seeing your family after a long time. “Everyone respects each other very much,” Arajuuri said. “Sport at this level is egoistic but we are more than colleagues, we are friends.”

Markku is a very common name among Finnish men. There is even a Finnish Markku Union that has an annual Markku of the Year award. Kanerva won it in 2009 after leading the Under-21s to the European Championships. Finland’s coach is a tactics nerd who spends whole days on his laptop analysing opponents. Kanerva is an Arsenal fan who loves to play tennis and padel, a kind of scaled-down version of doubles tennis.

Teemu Pukki was Finland’s next big thing as long ago as 2008, when he left KTP for Sevilla. He played one league game in Spain and looked destined not to fulfil his potential. IHe was often made a scapegoat for the national team – even when he played well. That has all changed and if you ask anyone in Finland to name one of our players they are likely to say Pukki. Finns appreciate people who are humble and he really is. After he scored his first Premier League hat-trick he went straight home to look after his daughter, having promised his wife she could go out for the evening. 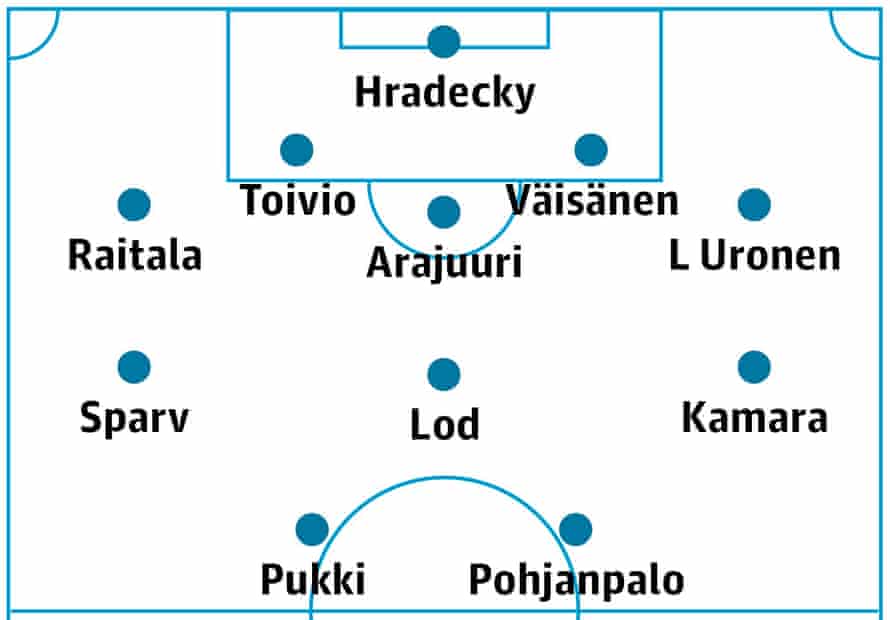 Happy for a year’s delay

The starting lineup would probably have been the same if the tournament had been played a year ago, but the prospects for forward Marcus Forss appear much brighter now. In January 2020, he tore his hamstring while on loan at AFC Wimbledon and did not play again that season, but this season he finished with a flourish, scoring the winning goal for Brentford in the Championship play-off semi-final. He also scored on his international debut, against France in a 2-0 away win last November.

“Eteenpäin on menty” We have progressed.

“Lopussa saatiin kulma” We got a corner in the end.

“Hävittiin kenelle pitikin” We lost against a team we expected to lose against (as you may have noticed, Finns tend to be a bit pessimistic).

The coach read stories online for children at nursery school. He also said it was time to increase salaries for teachers so they wouldn’t leave for other jobs. “Classes are getting bigger and the job more demanding,” he told Finland’s education trade union. “I know a few people have moved to other areas of work on because they haven’t coped.”

For a profile of goalkeeper Lukas Hradecky click here.