Denmark go into Euro 2020 high on confidence but need to find another gear if they are to trouble the top teams. They have started 2022 World Cup qualifying in style, winning their first three games, scoring 14 goals and conceding none. Israel, Moldova and Austria were swept aside but the coach, Kasper Hjulmand, knows there is more to be done.

“We have had some good results but we could feel the difference [in quality] when we played Belgium twice last year,” the 49-year-old said. “We felt we played well in the two Nations League games against them but we lost both by two goals. When we play the best teams, we really must raise our game.” Belgium are in Denmark’s group at the Euros.

Hjulmand has been a revelation since taking over from Åge Hareide last year. The Norwegian had been in charge for four years and was going to finish his spell with Euro 2020 but the Covid-19 pandemic got in the way. Hjulmand took over and has tried to implement new ideas, wanting his team to have more possession and playing with attacking full-backs.

The coach has not been afraid to try new players and young, attack-minded players such as Mikkel Damsgaard and Andreas Skov Olsen have been given a chance, while he is not averse to changing formation, even during games. He has alternated between a four- and three-man defence, with the latter giving the side more options going forward. “The final part of a match is really, really important,” he has said about the ability to switch tactics during a game.

The back four is solid: Daniel Wass, Simon Kjær, Andreas Christensen and Atalanta’s Joakim Mæhle with Kasper Schmeichel behind them. In midfield, Hjulmand relies on two hard workers, normally Dortmund’s Thomas Delaney and Tottenham’s Pierre-Emile Højbjerg, to set Christian Eriksen free. He does not play as an old-fashioned No 10 but has licence to roam all over the pitch.

One potential problem for Denmark is up front where Martin Braithwaite and RB Leipzig’s Yussuf Poulsen have struggled for goals this season. The FC Copenhagen youngster Jonas Wind could be an option. Most Danish players have had a good season at club level and cannot wait to play three home games in front of their fans in Copenhagen.

Kasper Hjulmand considered studying philosophy before entering the football world and is a diverse character. Politics, art and reading are among his interests outside football; he decided to become a coach after his playing career ended at the age of 26 because of a knee injury. Identity is extremely important for Hjulmand and he spent a year studying what successful teams such as Germany and Liverpool have done. “It is important for the Danish people to see themselves in this team,” he told the Danish paper Berlingske. “If we are going to find this competitive edge that we as a small country depend on we have to know who we are.”

Denmark has an unofficial law called Janteloven consisting of 10 commandments, the first being: “Don’t believe you’re better than anyone else.” The majority of Danes do not like people being cocky and this is one of the reasons most of us love Christian Eriksen. Eriksen stood out from an early age but was known for always passing to his teammates before switching on late to win games. He is the kid next door – the one who just loves playing football and isn’t too interested in all the stuff that comes along with life in the public eye.

That’ll be Eriksen as well. He moved from Tottenham to Inter last February but struggled in his first year in Milan under Antonio Conte and was on the transfer list in January. But he has fought back and has been praised for his role as Inter won Serie A. “I never thought it would be easy. I have turned it around and now I have even won the championship. I am really pleased,” he said. 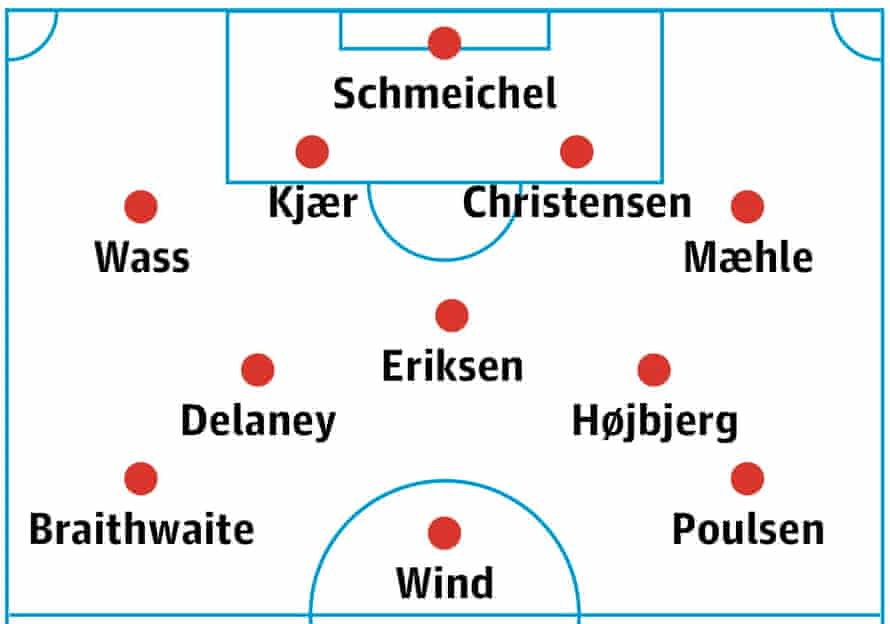 “Re-Sepp-ten” from the 1986 World Cup in Mexico, with a chorus in Danish and English: “Vi er røde, vi er hvide” (“We are red, we are white”), and then “we are Danish dynamite”. The title includes the first name of the coach Sepp Piontek in a word best described as “recipe”, ie the recipe for success. One of the stars from 1986, the winger Frank Arnesen, was the lead vocal with the rest of the squad on backing duties. They still sing it when Danish teams are successful.

Han kunne ikke engang komme på mit old-boys hold! He couldn’t even get in my old boys’ team! (After a big miss or a simple mistake.)

Man skulle ikke tro, du får penge for det dér! It’s hard to believe they make a living out of playing football. (Said, for example, when a corner flies behind the goal.)

Leicester goalkeeper Kasper Schmeichel donated £20,000 to a local charity, helping elderly people who needed face masks and a visit to help them through the hard times alone at home.