Roberto Mancini has been busy putting together the biggest numbers in Italy since Pythagoras, who travelled to the country in 530BC to teach his theorem. Mancini took over shortly after Gian Piero Ventura failed to qualify for the 2018 World Cup and at the time of writing, has the highest win rate of any Italy manager (70%). “Back in May 2018, I was confident we could be back, because nobody believed in us,” Mancini said. He was right. The Azzurri have so far won 21 games out of 30 under his tenure, including 10 wins in 10 qualifying group matches. Moreover, Italy extended their unbeaten run to 25, five games shy of a famous record set by Vittorio Pozzo in the 1930s.

The Euros will tell us if Italy are back for real. During their winning streak, Italy faced only three teams now in Fifa’s top 20 rankings. Cruising through an easy group with Finland, Greece, Bosnia-Herzegovina, Armenia and Liechtenstein, Mancini managed to define the principles of his 4-3-3 formation. Italy want to play out from the back and dictate the pace. Jorginho and Marco Verratti control possession in central midfield while Nicolò Barella attacks the opponents’ penalty area. Consequently, in possession Italy play with a 3-2-5. A right winger and a left back, usually Federico Chiesa and Emerson Palmieri, play as wide as possible, with Barella joining Lorenzo Insigne and a No 9 up front.

The result is a team with a good mix of youth and experience. “I am proud to be part of this group, we can dream big and win the Euros,” says Barella while the captain, Giorgio Chiellini, adds: “Our chemistry is a kind of magic.” Italy found a good balance between attacking football and defensive solidity, not conceding a goal in six games between November 2020 and March 2021. The Italian FA liked what they saw and extended Mancini’s contract until 2026.

Italy are the clear favourites to win a group containing Wales, Turkey and Switzerland. The Azzurri will play their group games in Rome and Mancini is likely to rotate heavily, as strength in depth is one of the qualities of the squad. Lack of experience could be a problem, though, with most of the players never tested at the top level. Mancini needs to build on enthusiasm and hope Ciro Immobile or Andrea Belotti will have the month of their lives. With an in-form No 9, Mancini could even plan a trip back to the final venue Wembley, where he lost the 1992 European Cup final with Sampdoria against Barcelona. .

Roberto Mancini is two men in one. As a player, he was incredibly talented but known for a complex personality, often unwilling to compromise. In the past few years, however, he has showed an almost zen-like approach. “I just got old,” he says. His Catholic faith could be part of the explanation. Mancini often visits the popular pilgrimage town of Medjugorje in Bosnia and is a devotee of the Virgin Mary. A man of style, he once designed a Sampdoria kit, while setting a trend with his elegant, striped scarfs as a manager. His main passion outside football is now padel, a popular racquet sport in Italy.

Italy’s No 1 goalkeeper Gigio Donnarumma is looking for a new club this summer after contract issues at Milan. Photograph: Alberto Lingria/Reuters

In a squad lacking a real superstar, Gigio Donnarumma is always ready to make the news. Nobody doubts his qualities, a mix of physical power, reflexes and maturity very rare to see in a 22-year-old goalkeeper. He has developed a love-hate relationship with Italian fans, however, due to his contract battles with Milan, who he will leave this summer. An idol for a lot of young Italy supporters, Donnarumma appeared in a popular Nintendo Switch commercial.

Manuel Locatelli wasn’t even on the map a year ago. In August he received his first Italy call-up and in September he made an astonishing debut against the Netherlands in Amsterdam. Almost 3,000 minutes of football with the ambitious Sassuolo later, he is ready to make waves for la Nazionale. 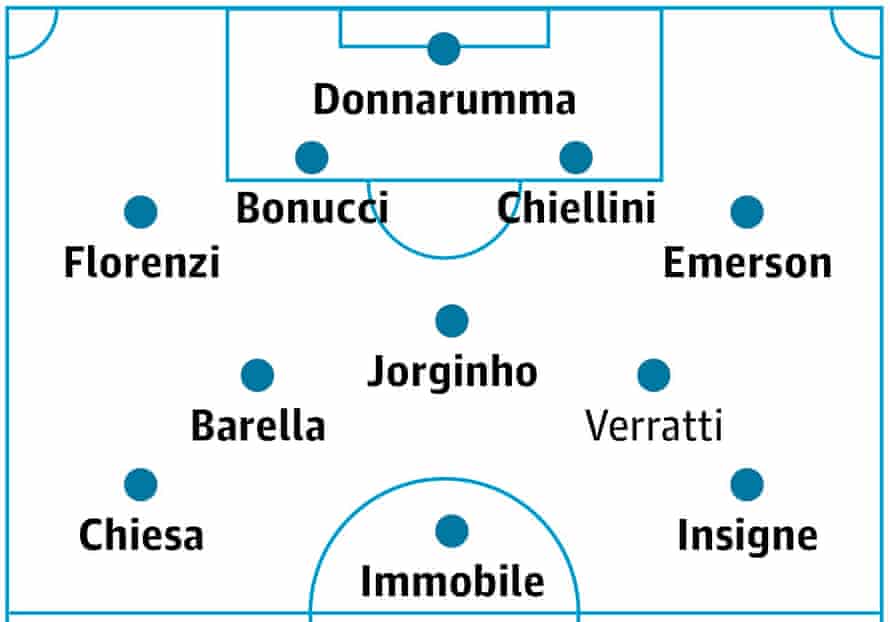 Marco Verratti is set to miss Italy’s first two games because of injury with Manuel Locatelli the most likely replacement.

If Italy perform well, be prepared to hear again: “po po po po po po po”, as if 15 years had passed in a second. During the 2006 World Cup in Germany, “Seven Nation Army” by the White Stripes became an unofficial anthem, despite nobody knowing the lyrics. From Totti to Cannavaro, a generation retired, but the song remained as a symbol of victory and it is set to be popular again.

Metti a Berardi! Put Berardi on (expression in southern Italian slang born in 2004 with “Metti a Cassano” and continued in 2017 with “Metti a Insigne”. Italians always have an unused sub to support).

Arbitro venduto! The ref is a crook! (doubting the good faith of a referee is a tradition in our country).