WHEN, God-willing, England lift the Euro trophy tomorrow, the heroes who ended 55 years of hurt are assured fame and fortune.

Five decades may have passed, but the players who won the World Cup in 1966 seem to have been living on another planet.

Following the victory, the team were whisked to a banquet at the Royal Garden Hotel in Kensington, their wives and girlfriends were not allowed in and were given burgers insteadCredit: Mirrorpix

Agents for Harry Kane and his team will long ago have negotiated eye-watering bonuses from bosses at the English FA for taking the ­honours at ­Wembley tomorrow night.

But in 1966, in the bowels of the famous London stadium while the rest of the team were recovering after their 4-2 extra-time win over ­Germany, team captain Bobby Moore slipped out of the dressing room.

He went to meet FA chiefs who told him — with no negotiations back then — that the players would share a total bonus of £22,000.

Moore decided each man would get £1,000, whether they had played in the tournament or not. He told his teammates: “We were all in this together and that’s how it will stay.” 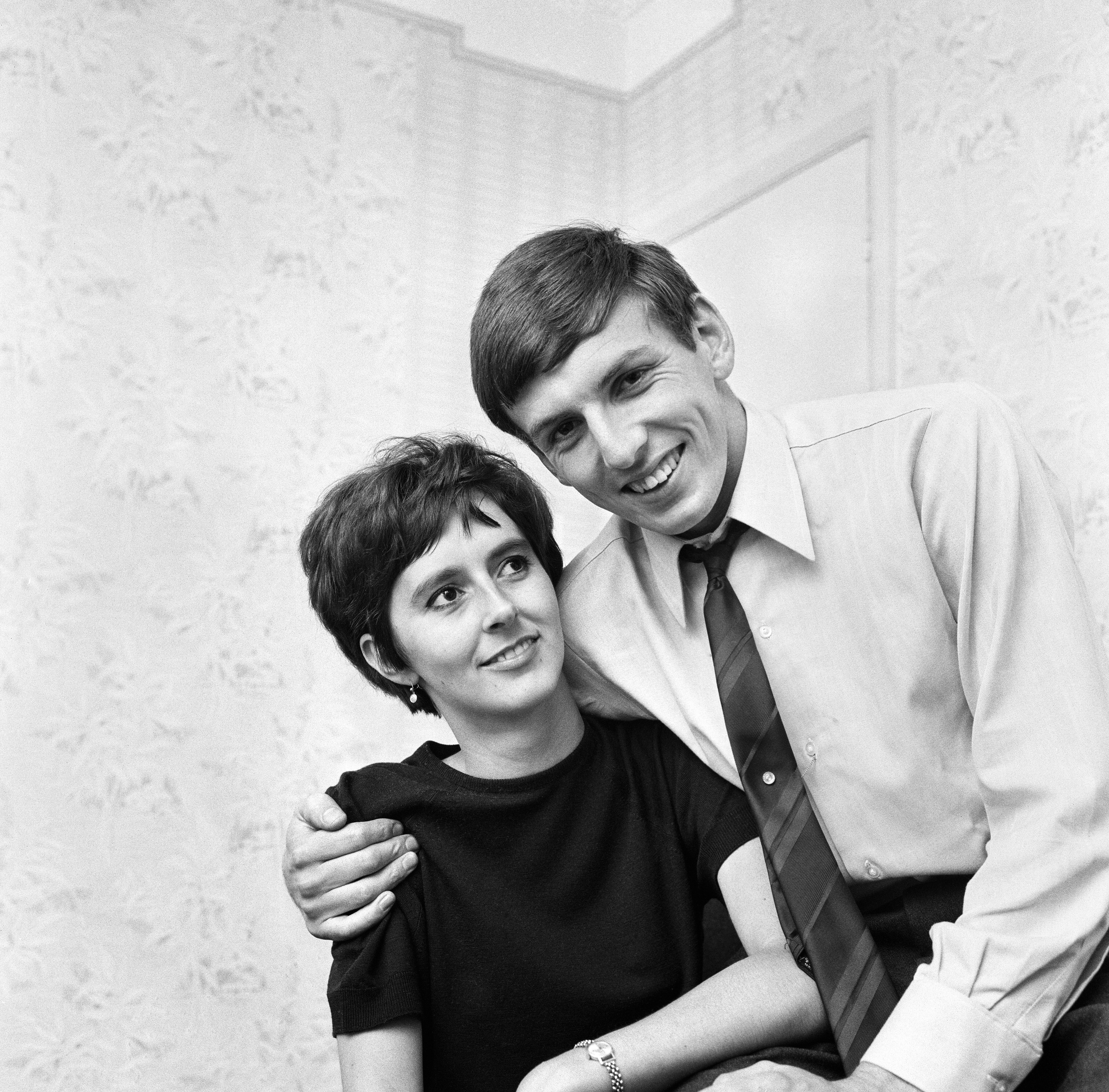 While our present-day England stars earn millions, have lucrative sponsorship deals and live in gated mansions, things were very different back in 1966.

‘Players of the people’

Then, they were on around 80 quid a week — and felt LUCKY. Because only four years earlier the £20-a-week cap on players’ wages had been lifted — and they were now earning five times the average worker’s pay.

The team’s youngest member, winger Alan Ball, was one of the few players with a kit deal. 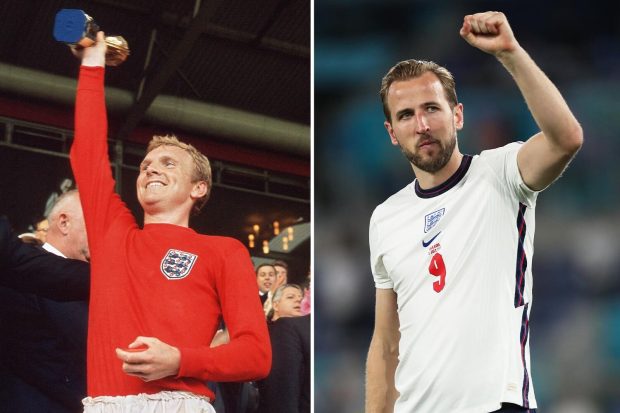 Ball, who only 45 minutes earlier had learned he was playing, ­collected £1,000 —  enough for a new car —  for wearing Adidas boots in the game.

Centre back Jack Charlton, on the other hand, got just £100 from his bootmaker. The FA had done a  deal with Marks & Spencer and the team ­travelled to the game in St Michael suits.

In ’66 Arthur Edwards was a young photographer on the local East ­London paper and took pictures of Moore and World Cup final goal scorers Geoff Hurst and Martin Peters. Arthur, now The Sun’s royal photographer recalls: “They’d invite me to their homes to take pictures and never asked for a penny and there was no agents making demands.

“It was a different world back then. They were players of the people.”

Hurst was living in a £3,000 semi in Chigwell and returned home to wife Judith after England’s victory — and mowed the lawn.

Moore’s wife Tina recalled: “After the match, we went back to our semi in Essex and held a party for some of our close friends. It wasn’t anything fancy, just a few drinks and a bit of music for a couple of hours. 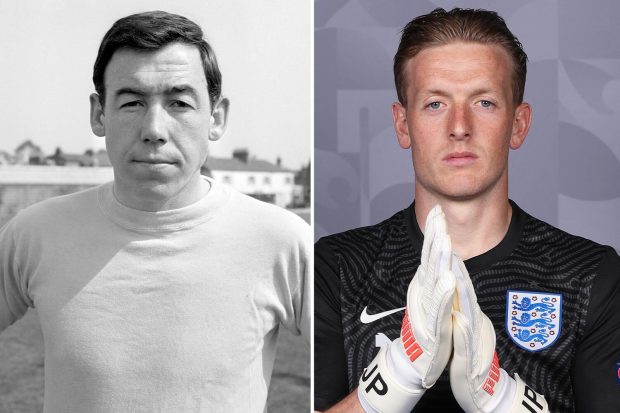 “After everyone left, it all felt a bit flat. Bobby poured himself a lager while I cleared away the glasses.

“I suppose Bobby and I did start to experience some things similar to footballers and their wives nowadays.

“After the World Cup, people wanted to take photos of us, and we had offers coming in from every direction.

“We got a telegram from composer Lionel Bart, inviting us to a party with Tom Jones and Joan Collins.

“Bobby got a contract modelling for Hornes Brothers, a men’s outfitters. He bought us a Jaguar — a car he had always longed for — and we had the house of our dreams built on a plot of land on the best street in Chigwell.”

Hurst, who was later knighted, also bought a bigger house — for £12,750. Liverpool striker Roger Hunt returned to his home in Culcheth, near Warrington, to find his lawn had been trampled by 600 fans chanting ‘Eey aye adio, we won the Cup!’ 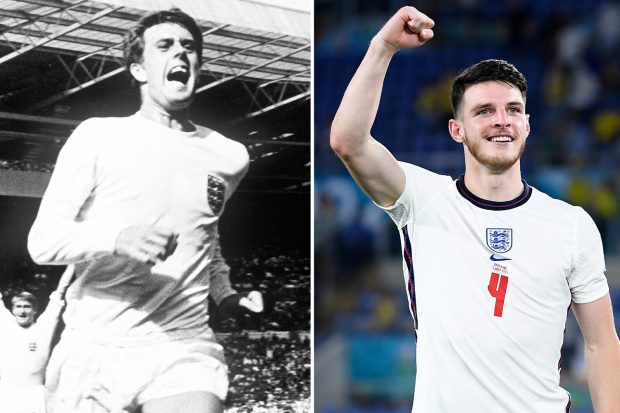 In 1966, Bobby Charlton also lived in Cheshire, in a modest detached home in Knutsford.

Today’s team are staying at England’s posh St George’s training facilities at Burton on Trent with its pools, gyms and even an oxygen chamber. A huge staff including chefs and nutritionists tend to their needs.

In July 1966, England’s squad plus two coaches and manager Alf Ramsey, stayed at the ­Hendon Hall Hotel, where the team ate the same menu as the other guests. For lunch before the final, the players had chicken, apart from Moore who had beans on toast.

To relax, they went shopping and played cards and cricket or sunbathed in the grounds.

There was no ring of steel around the players, like today.

Back then fans could stop and chat to them in the grounds, or hail them in the streets nearby while they went shopping.

The players’ wives had to stay at home and wait for their ­husbands or boyfriends to phone after training.

Fulham full-back George Cohen’s wife Daphne was left at home with their baby  Andrew for eight weeks while England trained for the tournament. She recalled: “I couldn’t call George at the team hotel — I didn’t even know the number.

“I had to write letters and wait for him to call. Alf Ramsey made it clear wives should keep away.”

The night before the big match, Ramsey took his team to the local cinema in Hendon to see the film Those Magnificent Men In Their Flying Machines. 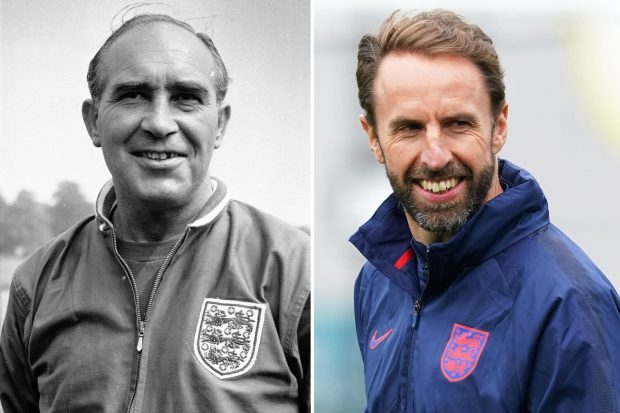 On the day of the match the wives, who were given two ­tickets each, had to make their own way to Wembley.

Pat Wilson, wife of left-back Ray, left their two children with her mum in Liverpool to drive to London for the final.

She said: “I picked up Bobby Charlton’s wife Norma on the way, but halfway down the motorway the exhaust went on our Ford Zephyr.”

Following the victory, the team were whisked to a banquet at the Royal Garden Hotel in Kensington. Their wives and girlfriends made their own way there to discover they were not allowed in — although Pickles, the dog that found the stolen World Cup trophy four months earlier, was.

Instead, they ate burgers in a restaurant downstairs.

Daphne Cohen, who had hitched a lift to Wembley said: “I remember passing the banqueting suites and feeling a little fed up that we didn’t even get a ticket for the tearoom.”

But the FA did thank the Wags for their sacrifice during the tournament —  presenting each with a pair of scissors in a box.