ENGLAND suffered a dramatic wobble as they attempted to score just 74 runs to win the First Test.

They lost three quick wickets and an apparently straightforward run chase suddenly turned into something worryingly twitchy and tense. 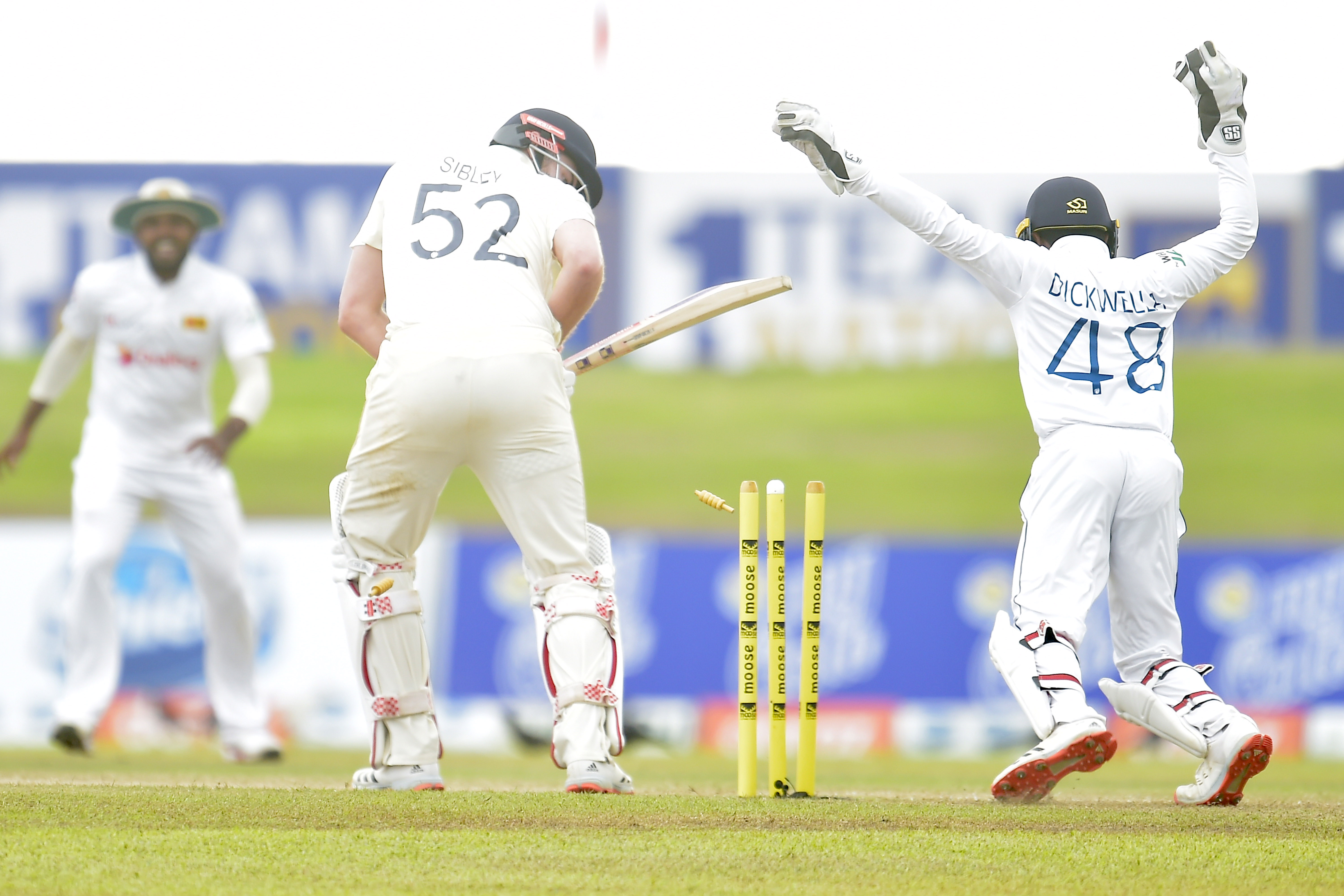 England wobbled on day four as they fell to 14-3 chasing just 74 to win the First Test in Sri LankaCredit: Sri Lanka Cricket

Dom Sibley and Zak Crawley were both dismissed cheaply and then captain Joe Root was run out for just one.

Root, who scored a brilliant 228 in England’s first innings, was the man who could have provided calmness to the panic unfolding around him. But his departure left England tottering at 14-3.

However, Jonny Bairstow and Dan Lawrence managed to survive until the close of day four, when England reached 38-3 and they are surely destined to win.

When Jack Leach produced a five-wicket haul in his first Test for 14 months, England looked certain to go 1-0 up in the series.

Leach took 5-122 in 41.5 overs of hard, sweaty labour and bowled with greater control as the innings wore on. He has played very little cricket recently so it was not surprising that he looked a little rusty.

His mate Dom Bess took three more wickets – to add to his five in the first innings – as Sri Lanka were eventually dismissed for 359.

But then Sibley was bowled shouldering arms to a ball that didn’t turn as much as he expected and Crawley was held in the gully as he aimed a drive at Lasith Embuldeniya.

Root was slightly impeded by bowler Dilruwan Perera as he responded to a call from Bairstow and was well short of his ground when wicketkeeper Niroshan Dickwella spun and threw down the stumps.

With chaos descending, Bairstow would have been run out next ball if Sri Lanka had managed another direct hit.

No team in Test history has failed to score fewer than 74 to win in the fourth innings of a match. But, for a while at least, it seemed a possibility.

Sri Lanka have fought hard after conceding a deficit of 286 runs on first innings and Angeloa Mathews, who scored 71 from 219 deliveries, was their mainstay on day four.

Nightwatchman Embuldeniya did not manage a run before popping a catch to short extra cover. But the rest of Sri Lanka’s batsmen continued to offer the resistance they displayed the previous day.

It was only his second Test century – and his first for seven years. He is a classic example of a talented but underperforming player at the top level.

Thirimanne eventually departed for 111 – which occupied 251 balls – when Sam Curran nipped one back and brushed the inside edge. Jos Buttler held the catch.

Bess found the edge of stand-in skipper Dinesh Chandimal in the first over after lunch and Root clung on at slip. 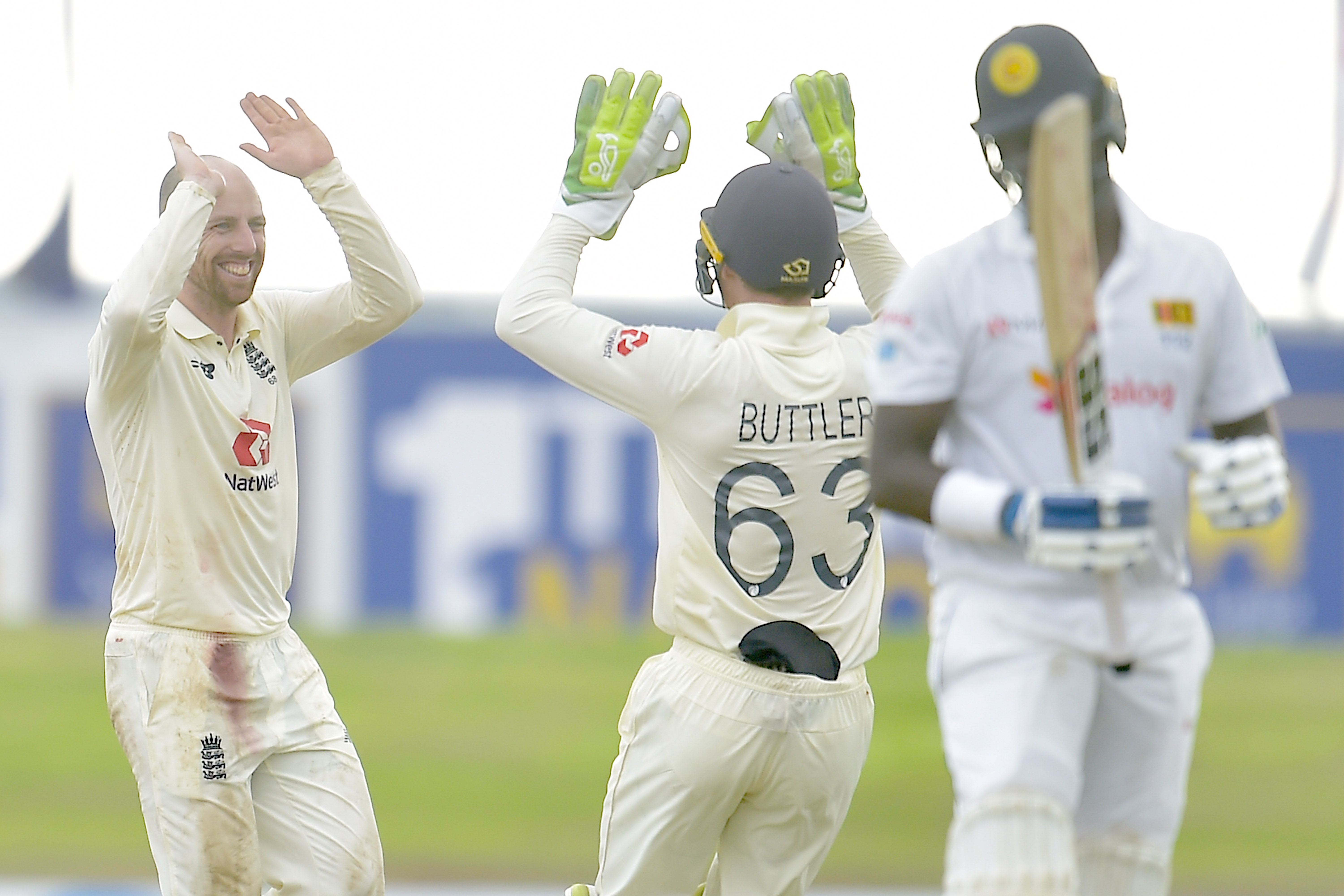 Mathews found an ally in Dickwella, the combative Sri Lanka wicketkeeper, and they stayed together for another 24 overs, putting on 48 for the sixth wicket.

Dickwella was caught behind attempting a gentle cut shot to the first ball of a new spell by Bess. A soft dismissal and then Dasun Shanaka was yorked by Leach.

When Wanindu Hasaranga aimed an extravagant drive at Leach, edged and Root took a fine catch leaping to his left at slip, Sri Lanka were 314-8 and with a lead of just 28 runs.

England were dreaming of wrapping up victory on day four.

But 38-year-old off-spinner Dilruwan Perera joined Mathews and 38 runs came for the ninth wicket. Perera is no mug – he has four first-class centuries – and he clipped five boundaries.

But he was given out stumped for 24 as he leaned forward to Leach. It was a marginal call by third umpire Lyndon Hannibal but he was convinced there was no part of Perera’s boot behind the line.

In his 48th Test, of which he has kept wicket in 28, Buttler completed his first Test stumping.

Mathews was last out, stretching forward to Leach and edging to Root, who held his fifth catch of the match.