EMMA RADUCANU returned to the court in Britain for the first time since Wimbledon at the Royal Albert Hall on Sunday. 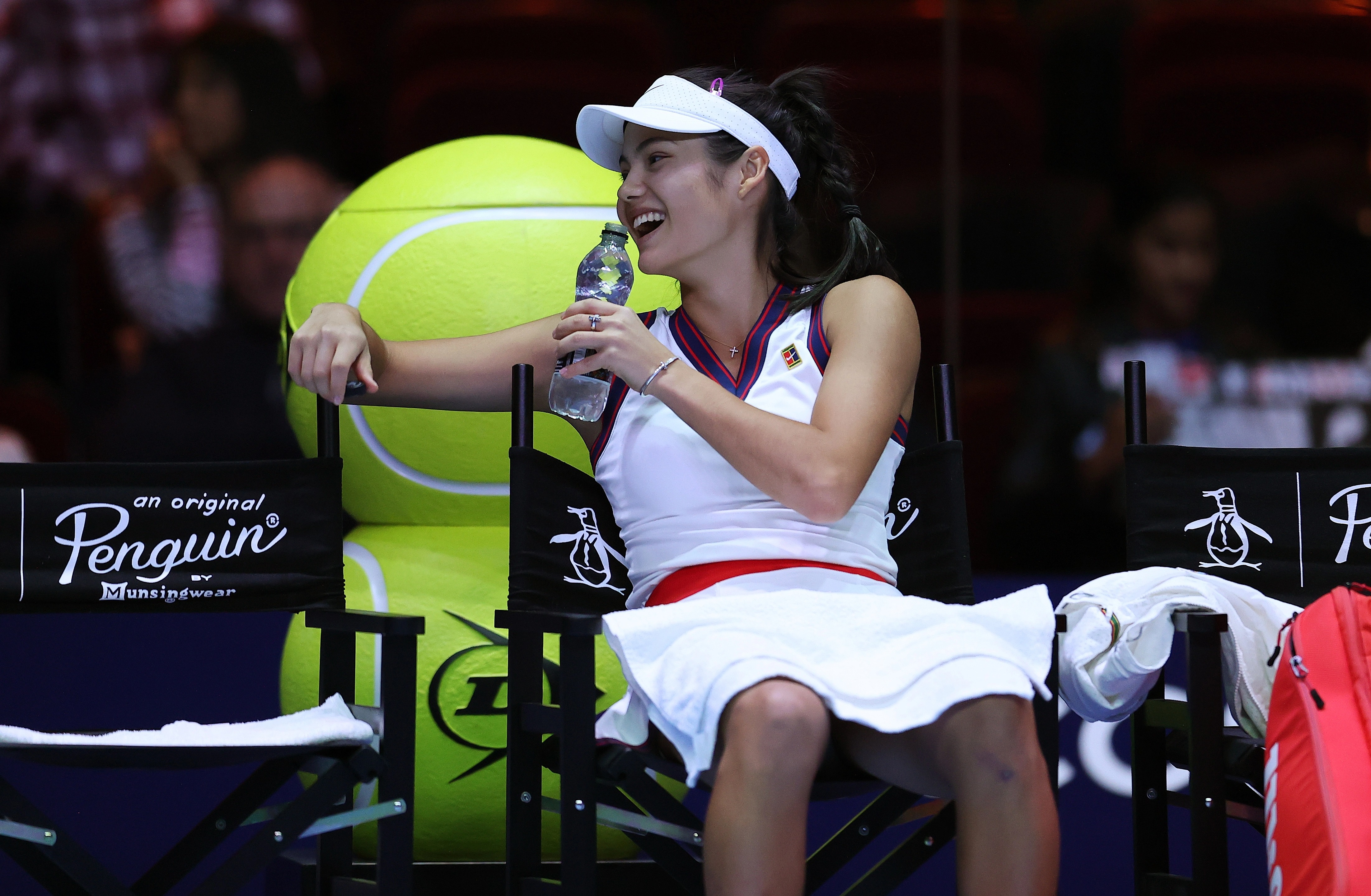 Raducanu was seen joking around and laughing during the exhibitionCredit: Getty

It was all knockout, playful stuff, the pair trading banter across the net, letting ball kids return serve at the iconic Victorian concert hall.

There was even one marriage proposal where a brave young male fan shouted out in the first set: ‘Emma will you marry me.’

Raducanu, who finished her A-Levels earlier this year, recently returned from a six-day holiday in the Caribbean, her first proper break for seven years.

This week she will begin intense pre-season training under the guidance of new German coach Torben Beltz.

She joked: “I have done a lot of fitness but not so much tennis, so I was nervous coming out to play in front of everyone.

“It is pretty surreal. My birthday last year I was at home, it was one of the lockdowns, and I wasn’t playing.

“It is pretty amazing how everything changed in one year.

“It just shows if you keep plugging away with your own work, not looking around, staying focused, and then anything can happen.”

The Tennis star has been nominated for BBC Sport Personality of the Year Award but will miss the event – but Raducanu did reveal she will be rooting for mentor Lewis Hamilton as the deserved winner.

A shortlist of nominees for the coveted 68-year-old individual sports prize is expected this week and the reigning US Open champion is favourite to win in Salford on Sunday December 19.

Yet she will not be in the country that weekend, remaining in the UAE for training purposes after an exhibition clash in Abu Dhabi on December 16.

After Christmas lunch in the desert with family and friends, the world No.19 will then fly to Melbourne for Australian Open preparations on December 27.

It would mean potentially receiving any award via satellite link-up – similar to what Andy Murray did by a Miami poolside when he was named SPOTY.

Yet F1-mad Raducanu reckons Hamilton – who has given her mentorship and advice – should succeed in the public vote if he overtakes rival Max Verstappen for a record eighth drivers title.

Talking about her plans for the Festive Period, Raducanu said: “I knew that playing tennis you would spend birthdays, Christmases and New Years not at home.

“I don’t see that as a sacrifice. I’m there to train, I’m there to get better, and then I’m flying to Australia.

“What will be best for me is staying in the Middle East rather than flying seven hours back and forth.

“So I feel like it’s not a sacrifice and hopefully my mum or dad can come out. One of my best friends lives in Dubai so I can see her as well.

“The BBC Awards are something that’s so far out of the realms of possibility for me to win. I’m rooting for Lewis in the race.”

Raducanu and Hamilton, 36, met at the glitzy Met Gala Ball in New York in September shortly after her incredible Slam victory at Flushing Meadows on her pro debut.

They shared a chat about negotiating the pitfalls and perils of instant worldwide fame.

The Bromley ace said: “Lewis has been such a good role model for me, in terms of just helping me through these next stages. He is a really cool person.

“Lewis has just been really cool in helping me. He said: ‘Be patient. You just got to ride the wave. It’s all good. Don’t worry.’

“It was good reassurance. I look up to him. Whenever we met it’s really cool.”