DIOGO JOTA helped send Portugal into the play-off final – by the skin of their teeth.

The hosts looked like they had an iron grip on the game when the Liverpool striker slotted home his 42nd minute header after Otavio broke the deadlock.

Jota scored a sensational header at the back postCredit: GETTY 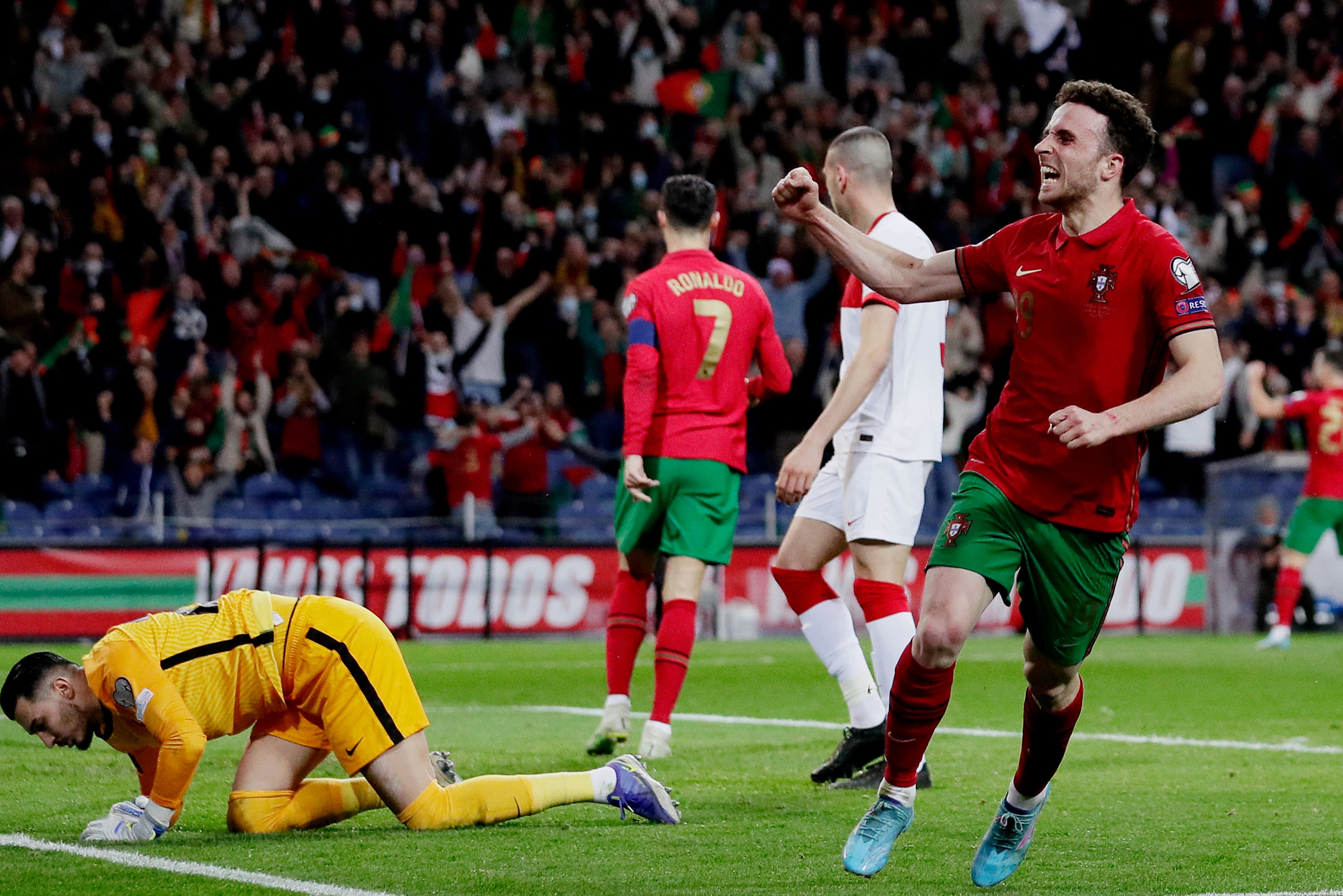 The Liverpool man stepped up as Ronaldo had an unusual off-night in his country’s coloursCredit: GETTY

But veteran Turkey striker Burak Yilmaz went from hero to villain by clawing one back then MISSING a crucial last-gasp penalty.

Cristiano Ronaldo had a hand in the first-two goals but was in a strop throughout the night for missing a string of golden chances.

And to make matters worse for the Manchester United icon, it was Matheus Nunes who spared his country’s blushes with a precious third goal in the last kick of the game.

Portugal were in the driving seat early on and Bruno Fernandes whipped a peach of a free-kick into the box but Jota skied the sitter from three-yards. 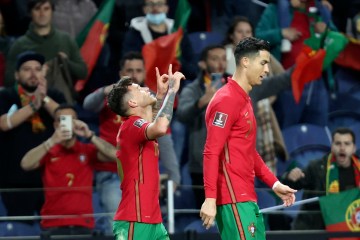 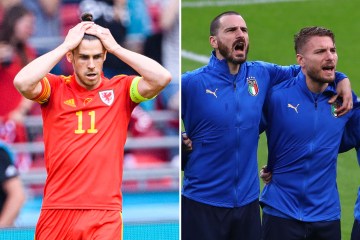 Otavio made up for the Liverpool man’s blunder with a sweetly struck opener 15 minutes in.

It all began with Ronaldo’s charging run down the right flank before he teed up Jota who linked up with Bernardo Silva.

The Manchester City star rattled the far post with a rasping shot before the ball fell to Otavio to sweep home the rebound for his first competitive goal for Portugal.

Turkey finally woke up and Berkan Kutlu fired a warning shot with a header into the side netting, fractions away from goal.

The steady hands of Diogo Costa then did well to keep out a fierce, low drive from Orkun Kokcu.

The hosts hit back strongly and Manchester United midfielder Fernandes whipped in another inch-perfect free-kick but Ronaldo overshot his run and blazed his header wide.

A razor sharp move from Ronaldo and Otavia then led to Jota doubling the lead with a thunderbolt header on 42 minutes and his ninth international goal.

But Turkey had a spring in their step after the restart and it was only a matter of time before they rained on Portugal’s parade.

It fell to Yilmaz to hand the visitors a lifeline with his 31st goal for his country on 65 minutes as he latched onto Cengiz Under’s cute through ball and rifled home.

Tempers flared late on when Jose Fonte hacked Enes Unal down with an outstretched leg. 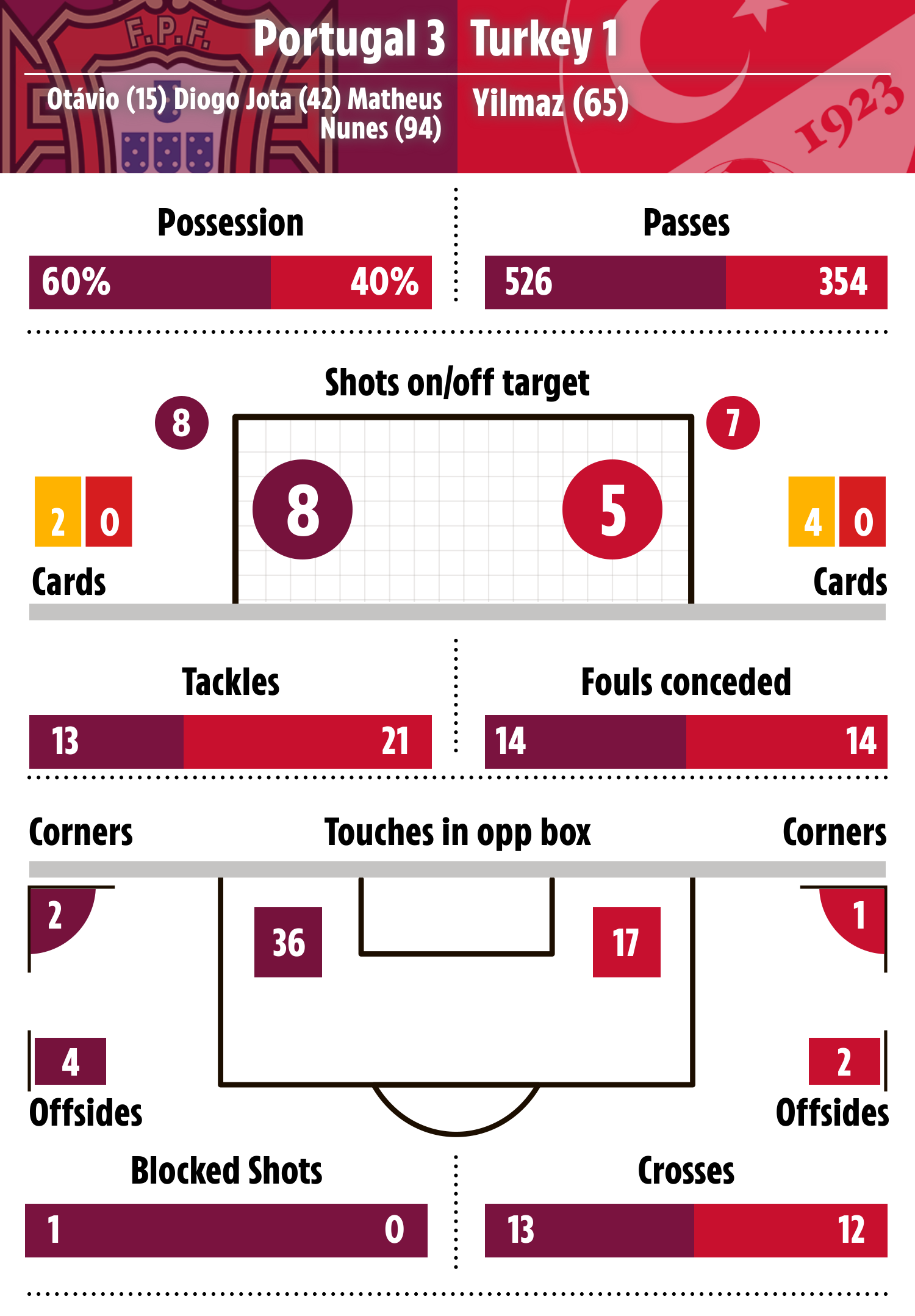 The penalty shout was initially turned down before referee Daniel Siebert who went to check the pitchside monitor and then pointed to the spot.

Yilmaz stepped up – but Fonte thanked his lucky stars when the normally ice-cool finisher blazed over the bar.

But in the final seconds Nunes put it beyond the visitor’s reach with a red hot finish following Rafael Leao’s through ball on 94 minutes.