PUTTING round pegs in round holes paid off for Graham Potter.

I mean, who knew?

Graham Potter got things spot on as Chelsea dominated against ZagrebCredit: Reuters

The Chelsea boss picked the right players in the right formation and – lo and behold – his team were able, for spells at least, to control a match for the first time since AC Milan went down to 10 men nearly a month before.

Potter is the Blues’ new Tinkerman so you can bet midfield diamonds won’t be forever and he’ll try something different against Arsenal on Sunday.

But this Champions League dead rubber could do him and his team the power of good. 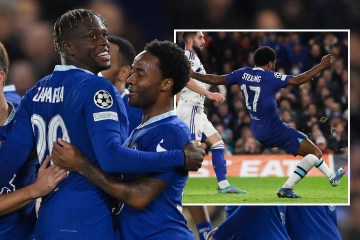 No, not Denis Zakaria, although the on-loan midfielder did find the net in his first appearance since arriving on loan from Juventus.

If anyone needed a goal it was Raheem Sterling and the England forward’s equaliser was timely for him and for Chelsea.

It was tempting to fear the worst for the Blues when Zagreb took the lead inside seven minutes.

But that wasn’t the result of a system failure, just bad defending.

Once the home side recovered from the shock, they had the distinct shape and style that had been lacking in the disastrous first half at Brighton and the first 35 minutes of the draw with Manchester United.

Sterling looked far more comfortable playing up top alongside Pierre Emerick-Aubameyang than he had as a kind of wing-back in Salzburg and Brighton.

Yes, he skied a chance to double his tally, and he was nowhere near his brilliant best.

But his first goal since Potter’s first game and a return to a more familiar role will be a confidence booster.

Apart from the early goal, Chelsea mostly looked solid at the back with a four-man defence.

Potter is the Blues’ new Tinkerman.

They were compact in midfield, rather than being overrun as they had been at the Amex.

Zakaria did enough to suggest he can be an asset in this most congested of seasons, although he went off injured with 20 minutes to go.

And the Blues looked lively and dangerous in attack at times. Victory could have been by a greater margin.

Dinamo were not great, it has to be said.

But don’t forget it was the defeat in Zagreb that proved to be the last game of Thomas Tuchel’s reign and the Croatian side did not lie down in the second half.

Potter’s tactical flexibility and imagination was undoubtedly one of the reasons Chelsea went for him: could he find a way of getting more out of a squad that had just undergone the most expensive revamp in football history?

This felt like a step in the right direction.

But table-topping Arsenal and their front-foot approach will be a different challenge.

After escaping punishment for a tactical misjudgment against United, but not against Brighton, Potter needs to get it right from the start again on Sunday.