HUNDREDS of protesting Celtic fans gathered outside Parkhead ahead of Sunday’s 2-0 win over Kilmarnock.

Punters turned out in their numbers after the Celtic Trust organised a ‘Covid-compliant’ demo demanding change. 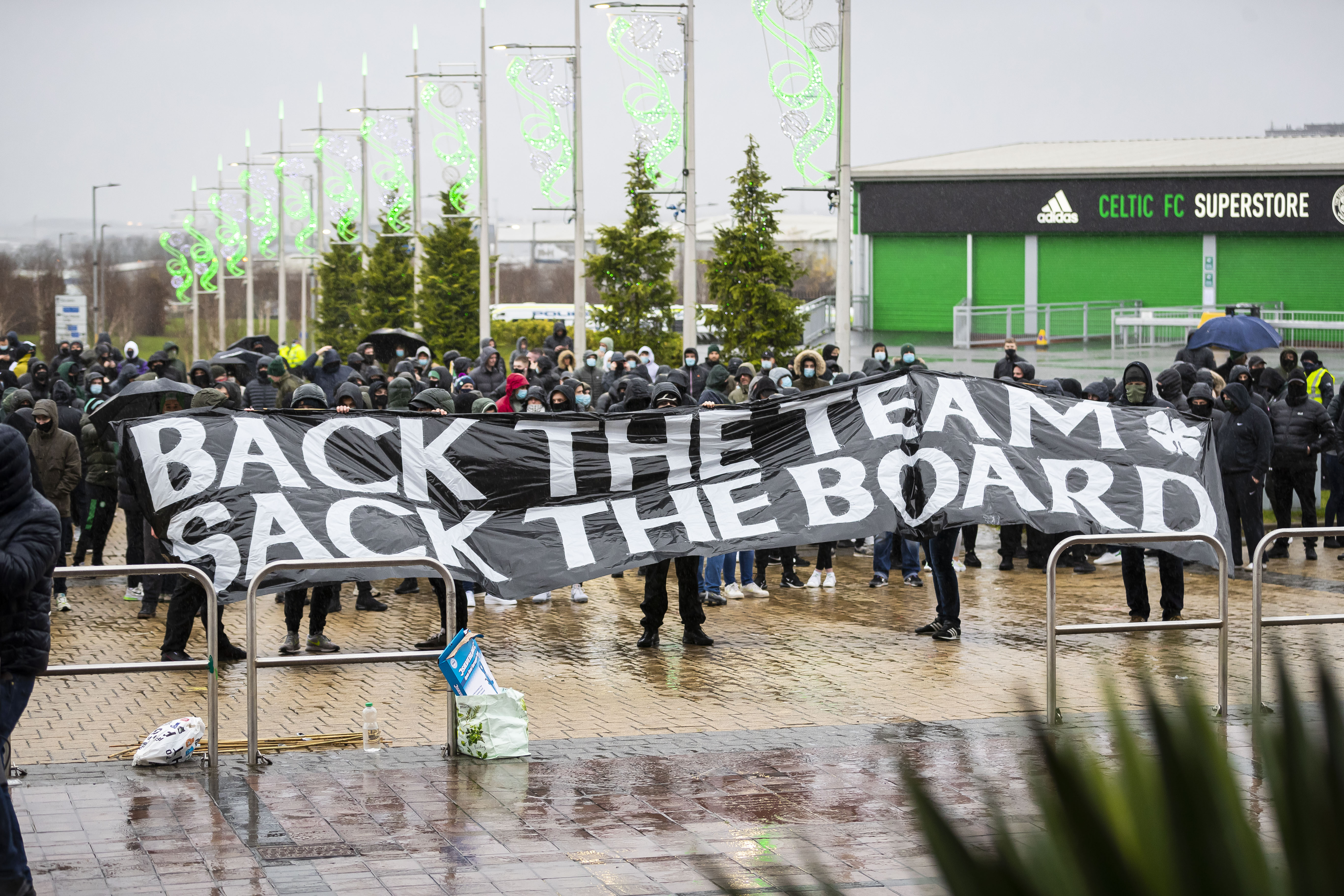 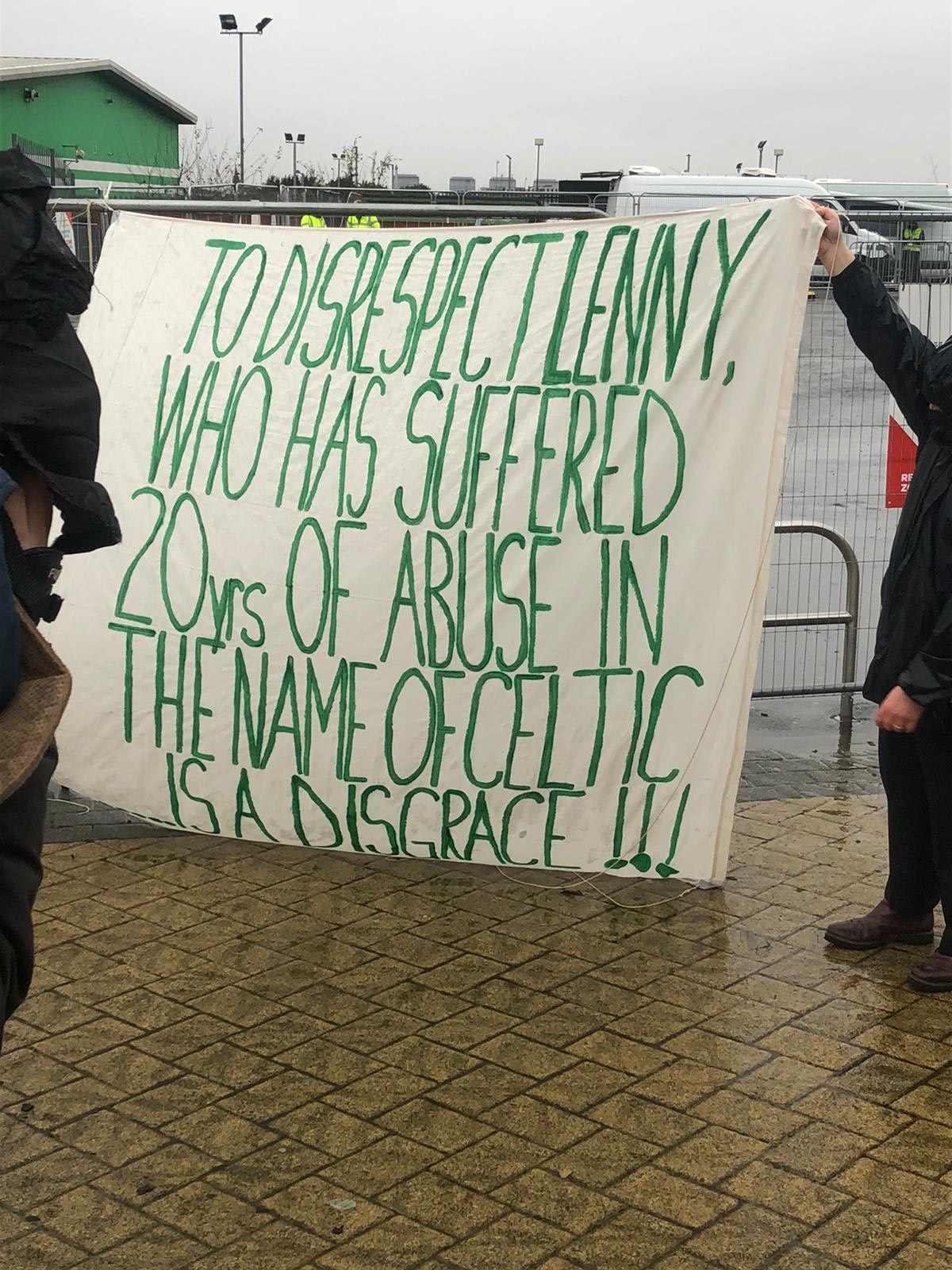 Some Celtic fans had a banner defending under-fire Neil Lennon 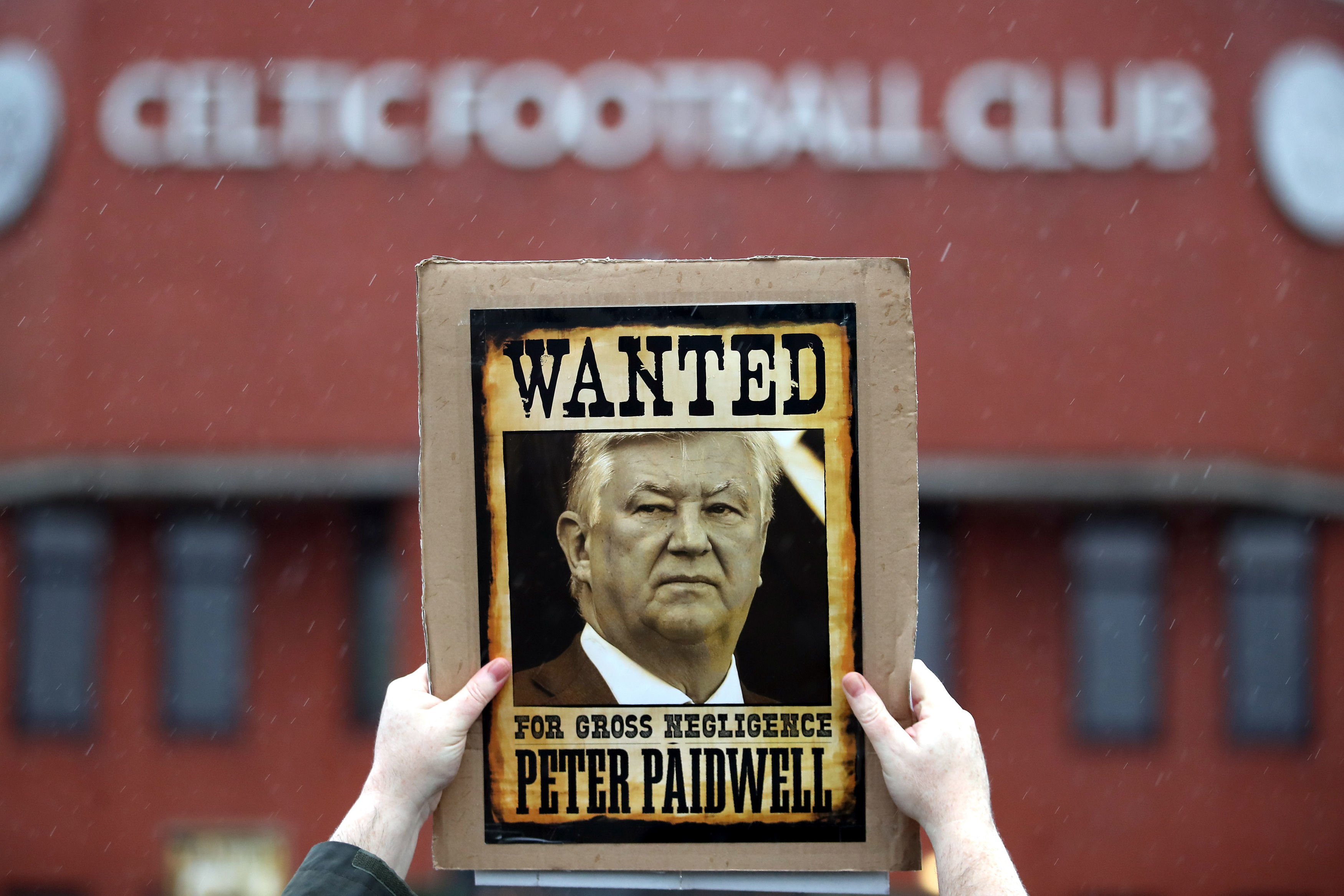 The group asked people not to travel from outside of Glasgow and urged fans to follow strict government regulations by wearing face masks and observing social distancing measures, as well as standing at least two metres apart.

There was a large police presence at Celtic Park as around 400 supporters stood outside the ground entrance chanting “sack the board”.

A number of banners were also unveiled, with one defending under-fire boss Neil Lennon, reading: “To disrespect Lenny, who has suffered 20 yrs of abuse in the name of Celtic, is a disgrace!!”

Jeanette Findlay of the Celtic Trust addressed the rain-soaked crowd, declaring: “The Celtic Trust took the view that something had to be done to allow supporters the opportunity to convey how they felt about what we’ve been saying for the last few months, in terms of the potential loss of this important season.

“And while that was going, the board – who are responsible for all of this, whose job it is to make sure that we have a successful team on the park – have had nothing to say. Absolutely nothing.”

Dozens of riot vans and police horses were deployed ahead of the 3pm kick-off.

Later on, fans cheered as they gave the Celtic team bus a warm welcome, singing The Celtic Song loud and clear as the players made their way into the stadium. 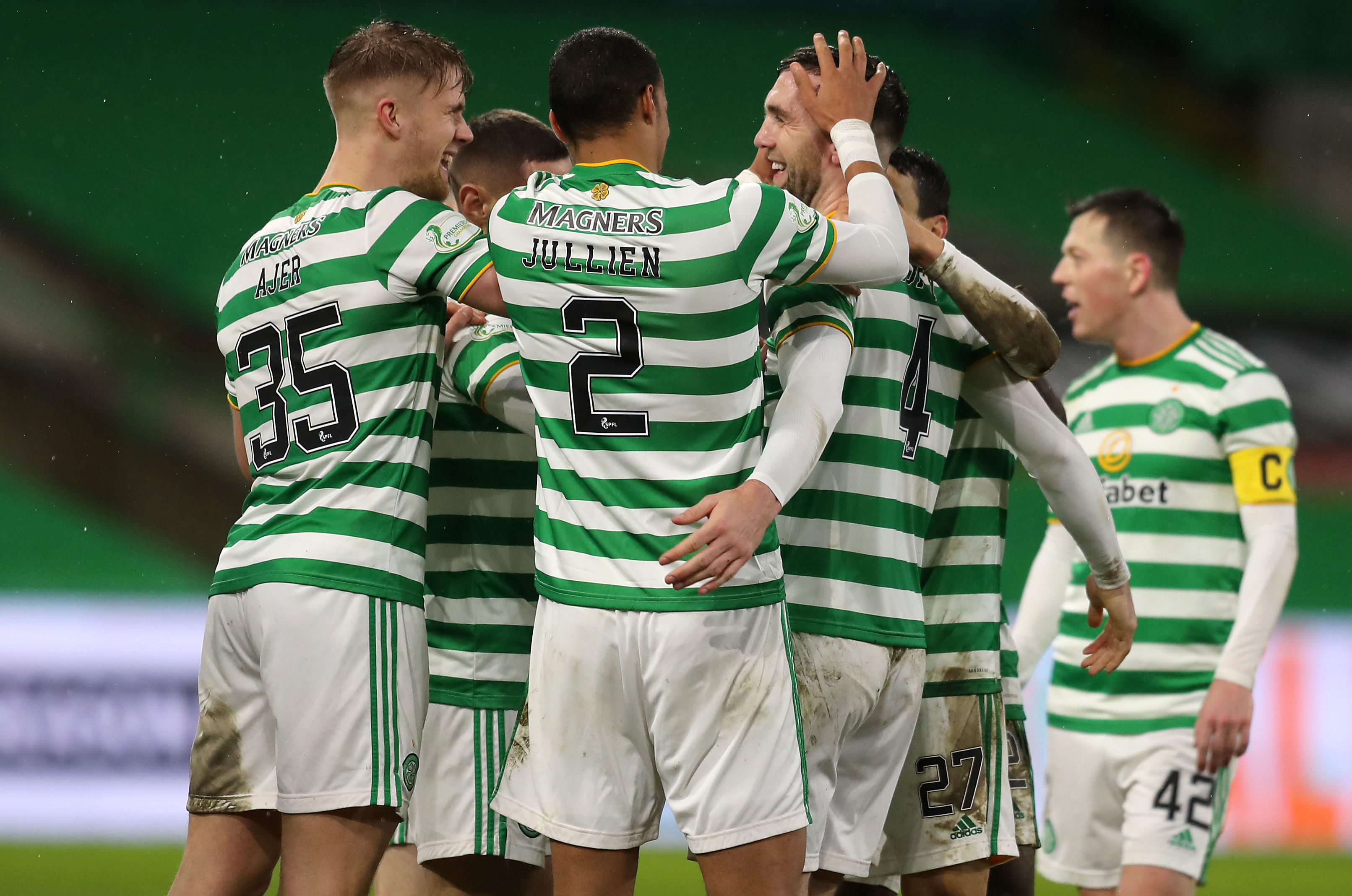 Celtic beat Kilmarnock 2-0 to ease some of the tension at ParkheadCredit: PA:Press Association 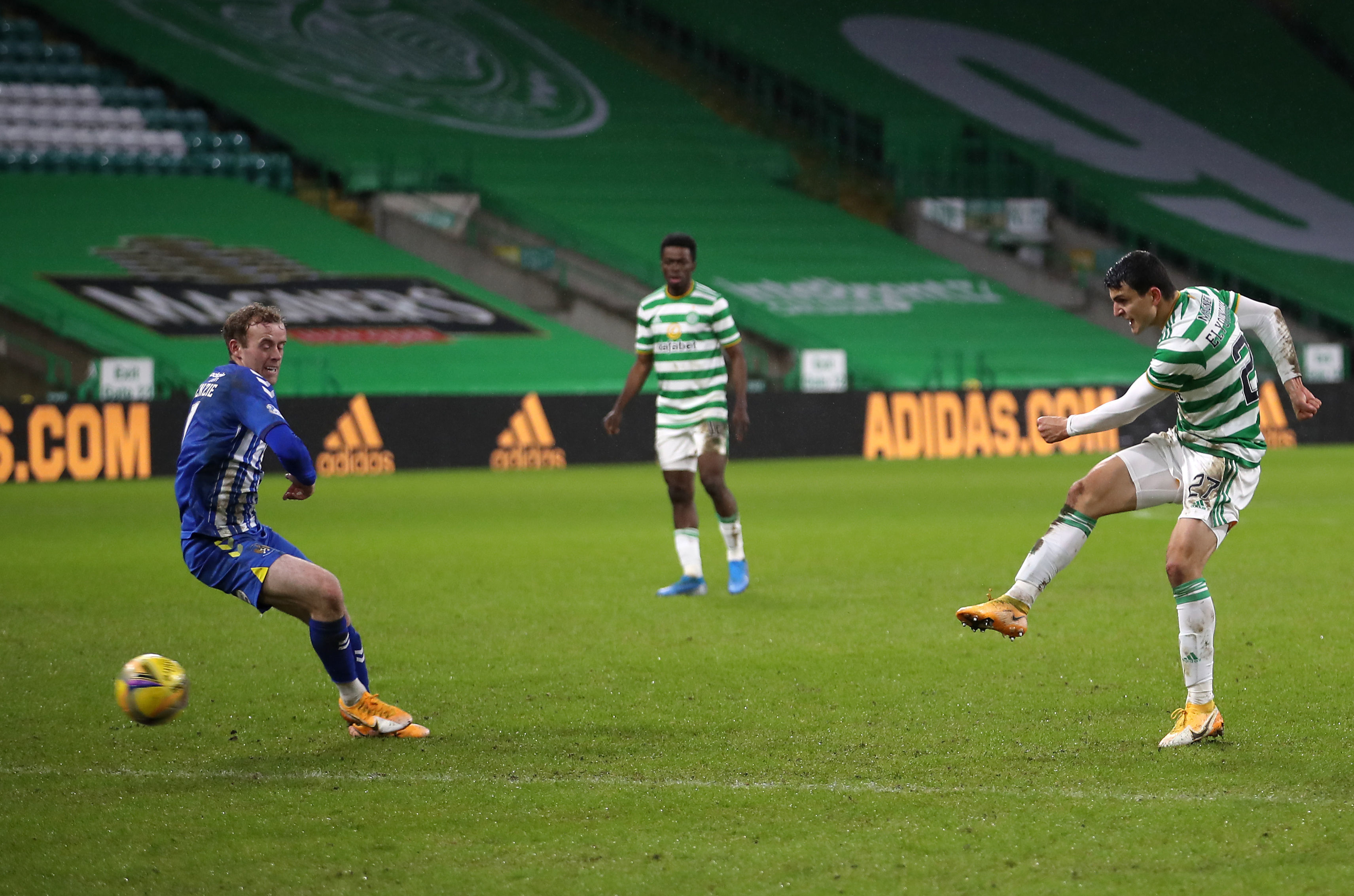 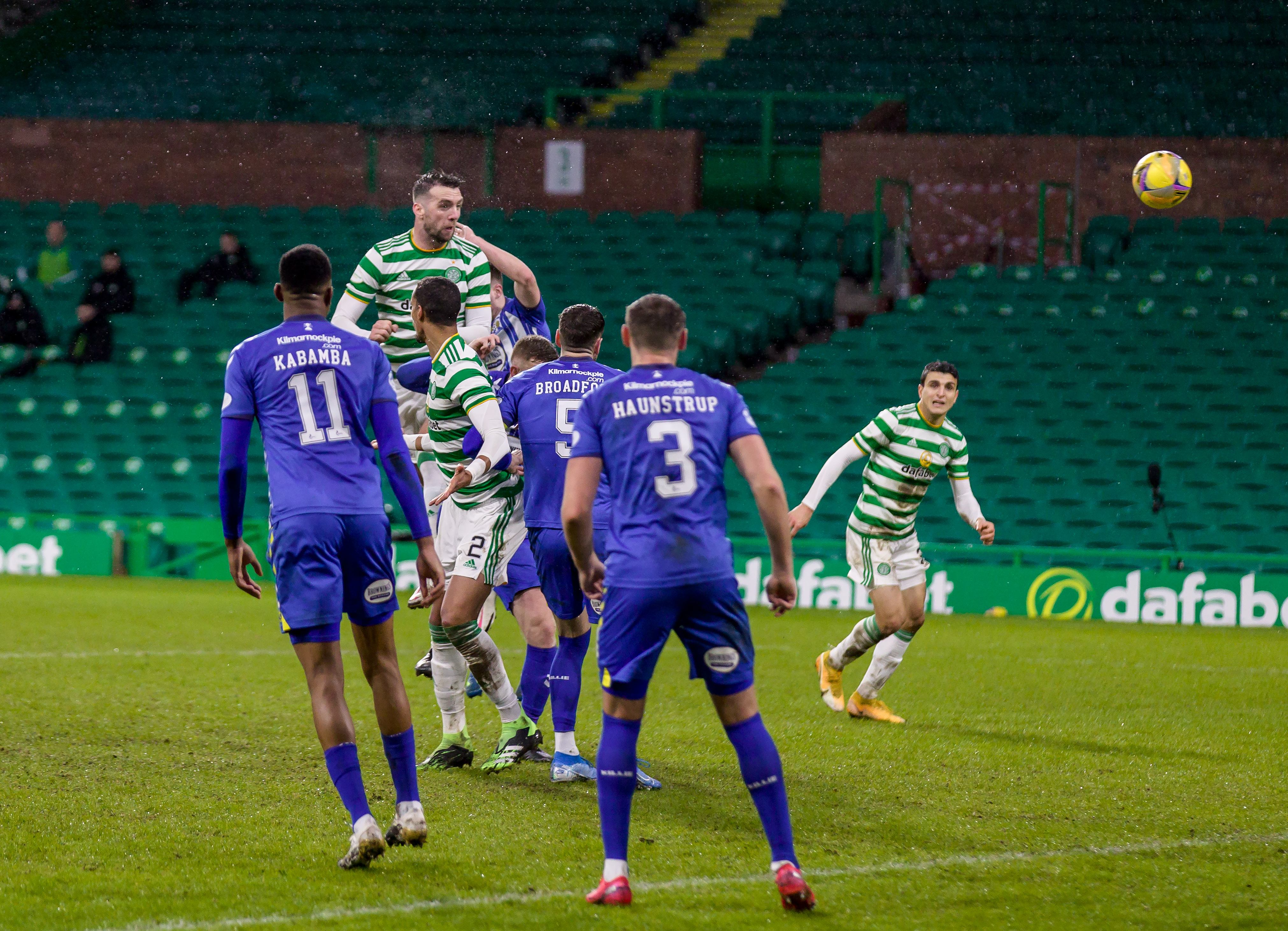 Tensions are high among the Parkhead faithful, with Rangers now 13 points – although Celtic have two games in hand – leaving their ten-in-a-row dreams in tatters.

An impressive win against Kilmarnock on Sunday afternoon, a second win on the bounce, would have eased some tensions.

Mohamed Elyounoussi and Shane Duffy both scored after the break to give the home side all three points. 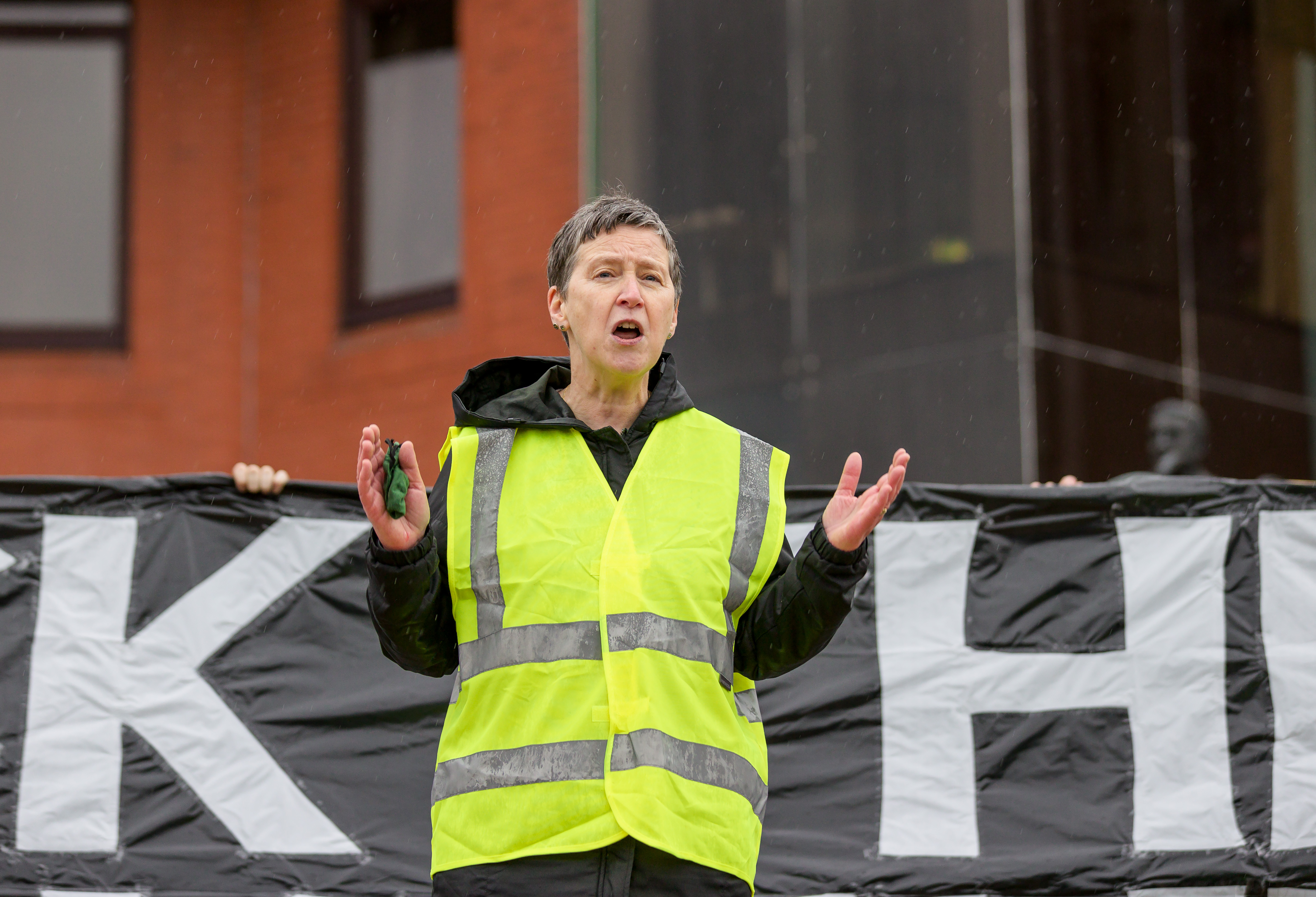 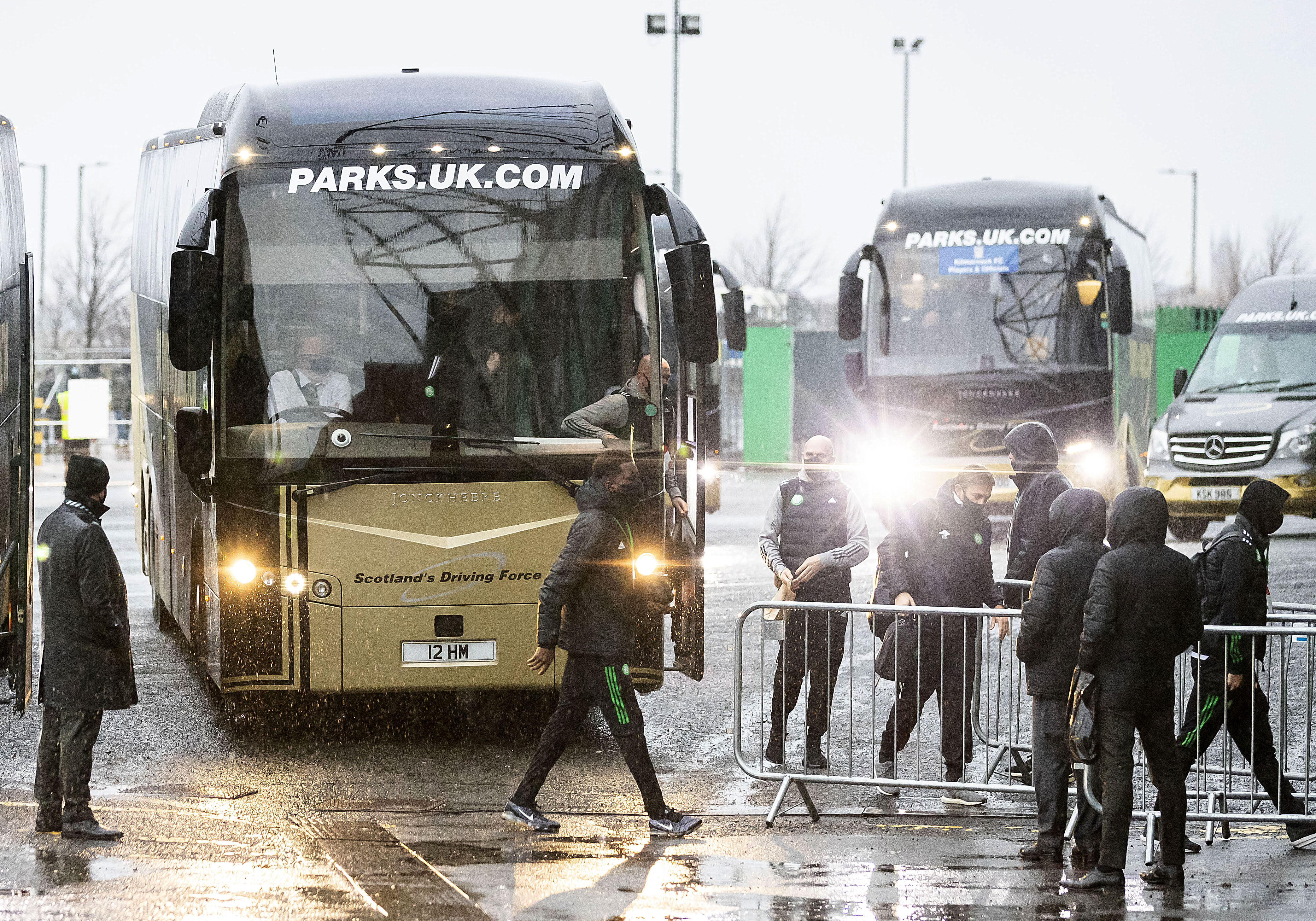 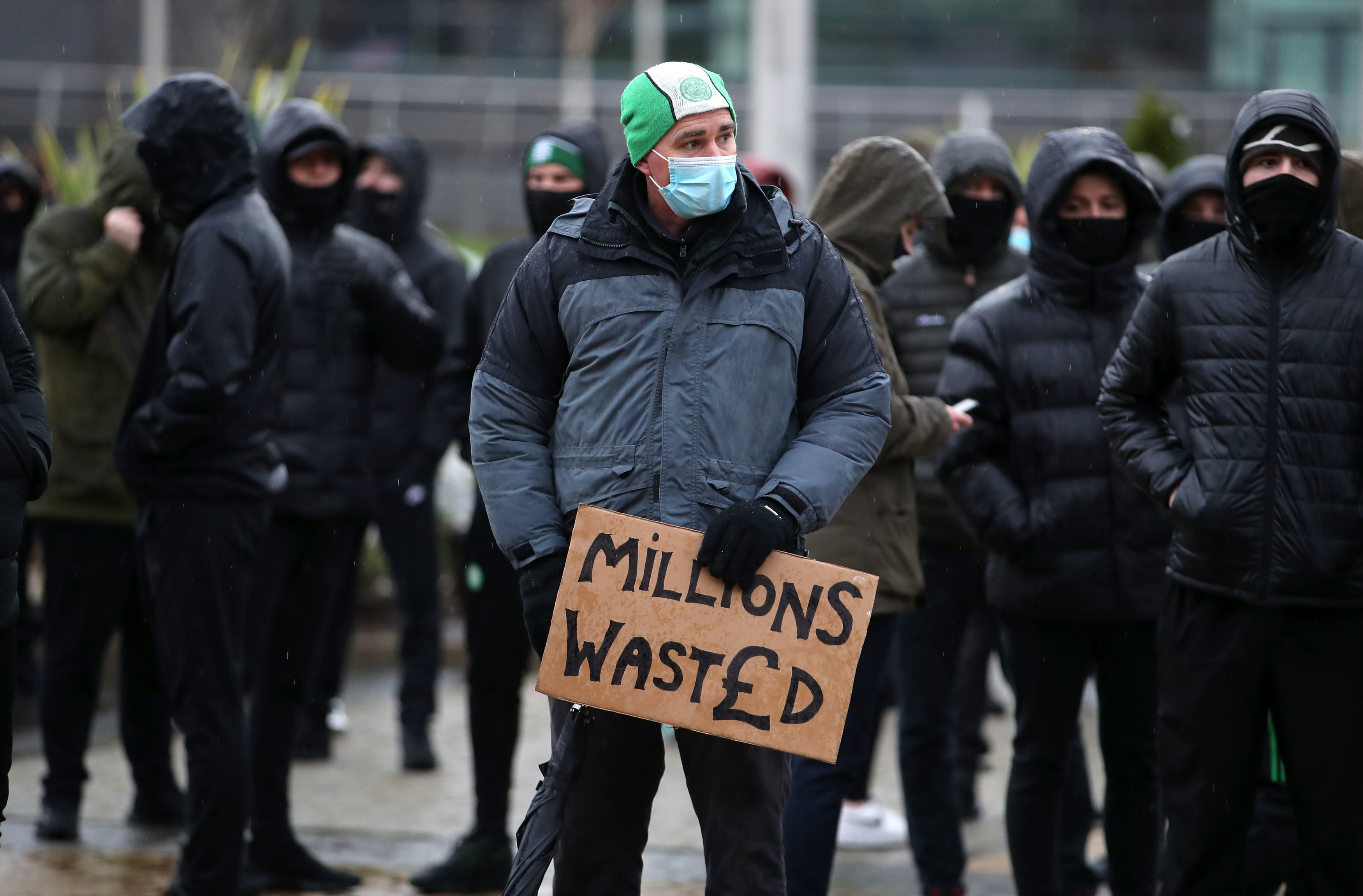 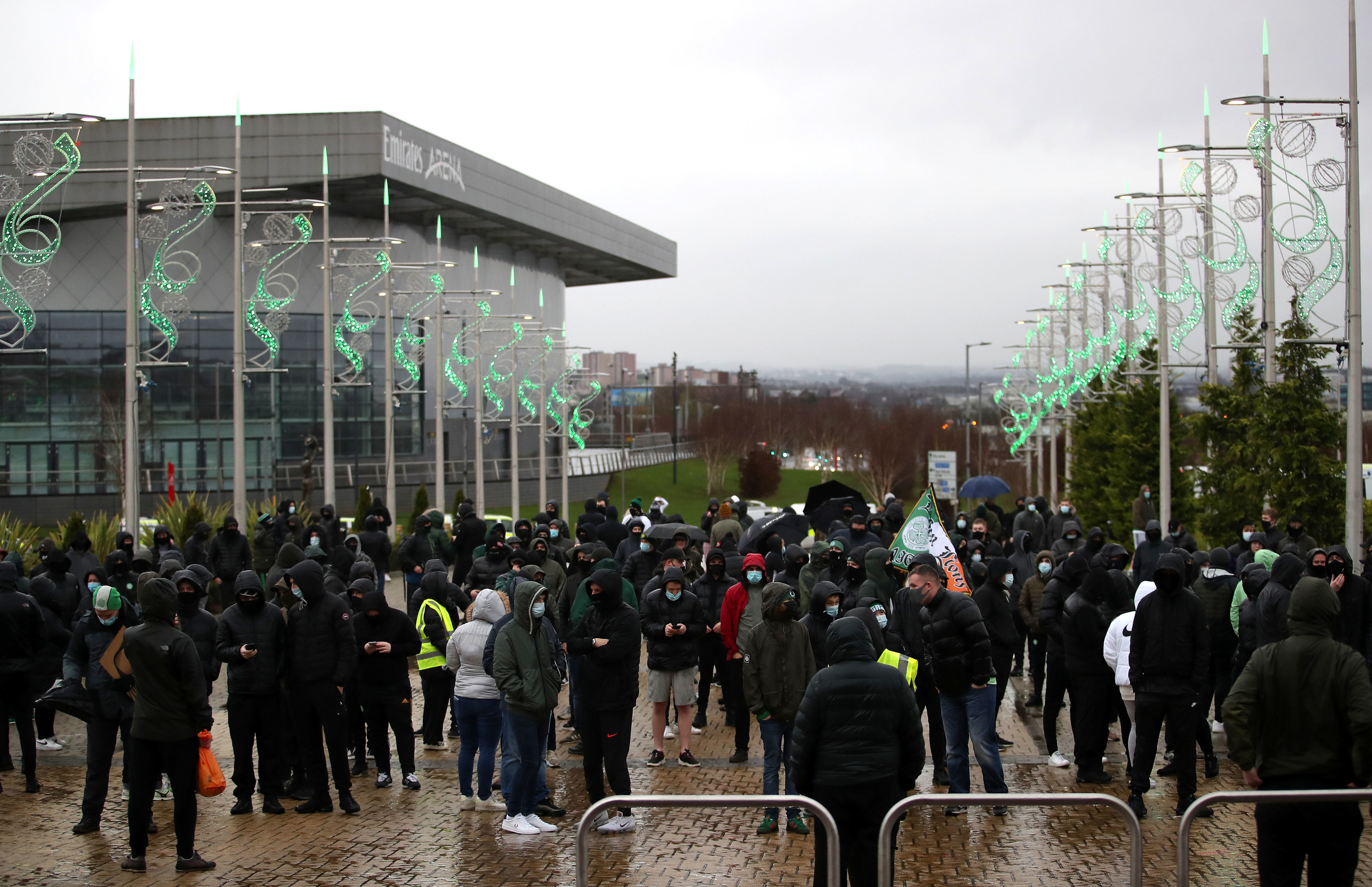 But club legend Lennon and the Hoops board have come in for heavy abuse and criticism in recent weeks following a horror run of results.

Celts recently fell to a shock Betfred Cup exit as Ross County ended their domestic dominance, while they have been humiliated in Europe having been dumped out of both the Champions League and Europa League.

Club supremos Dermot Desmond and Peter Lawwell have been targeted by supporters upset at the club’s stance to keep Lennon as manager, with the Northern Irishman’s future set to be reviewed in the New Year.

The Celtic hierarchy backed Lennon with a £14million transfer warchest in the summer but big-money signings like Vasilis Barkas and Albian Ajeti haven’t come close to justifying their hefty price tags. 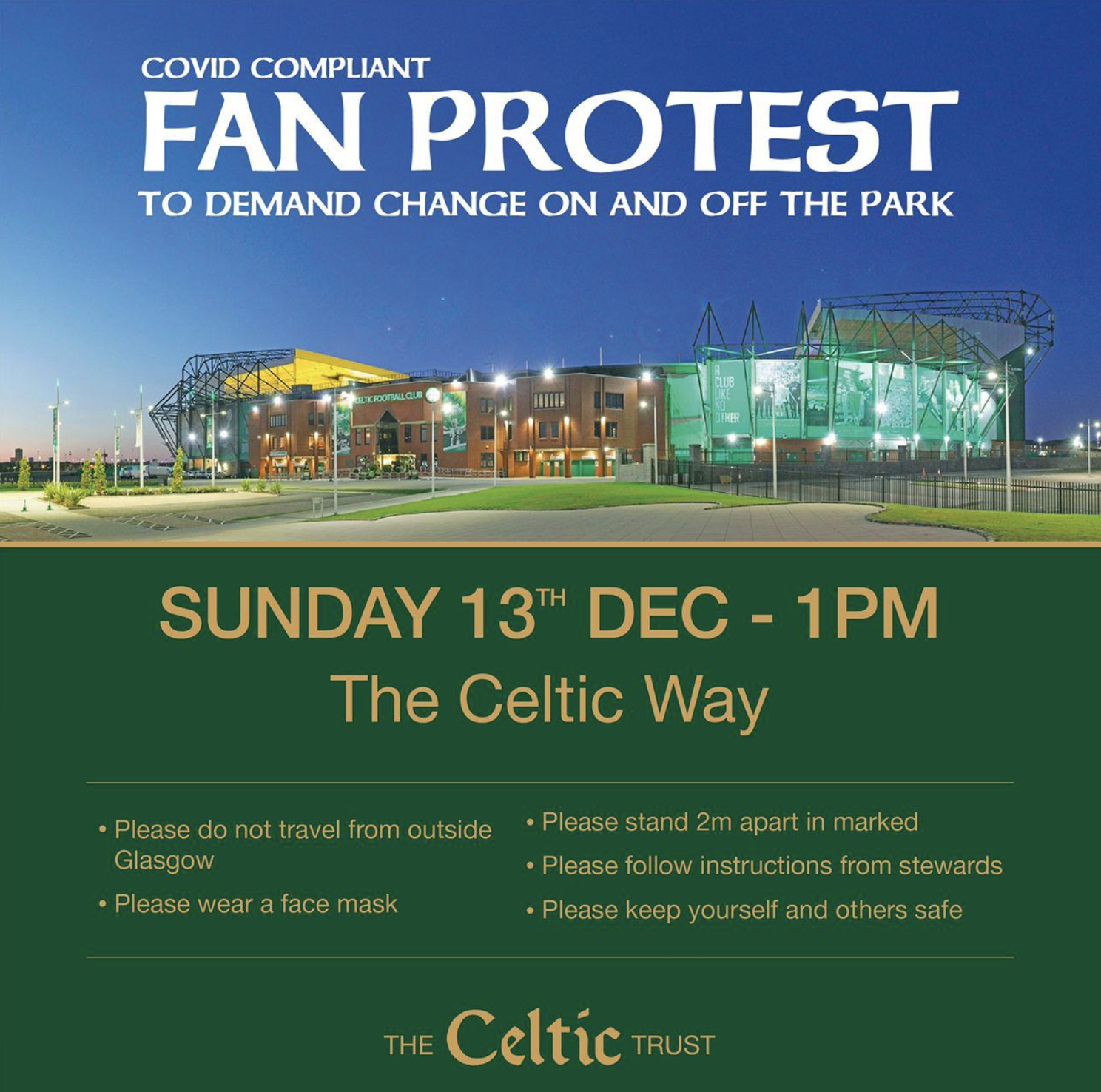 The Celtic Trust’s appeal to supporters

Celtic’s underperforming players have been left shellshocked in recent weeks after a furious fan backlash at the club’s dramatic collapse.

Missiles were launched at cars after the 2-0 home loss to County, while fans chased down the bus following last week’s 1-1 draw with St Johnstone.

This week, fans have pinned banners and scarves on security gates along the Celtic Way – with Lennon blasting one which read “shoot the board”.

On Saturday night, Rangers fans unveiled a banner at the home of their fiercest rivals, reading: “Back the board, shoot the ultras”.

Speaking ahead of this afternoon’s demonstration, Celtic Trust chairman David Low shared his concerns over the board as he reminded them how protests helped their case in the 1990s. 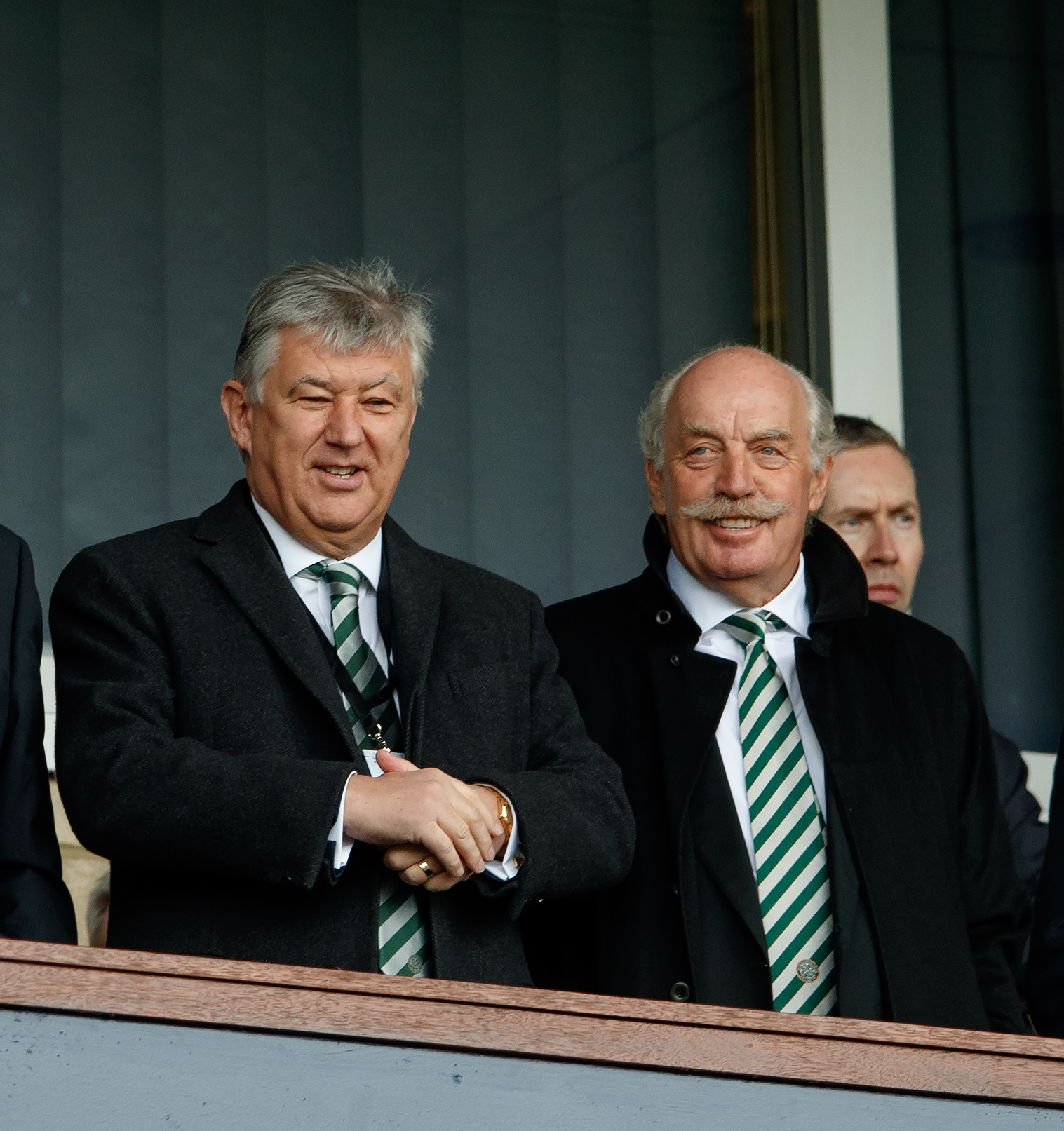 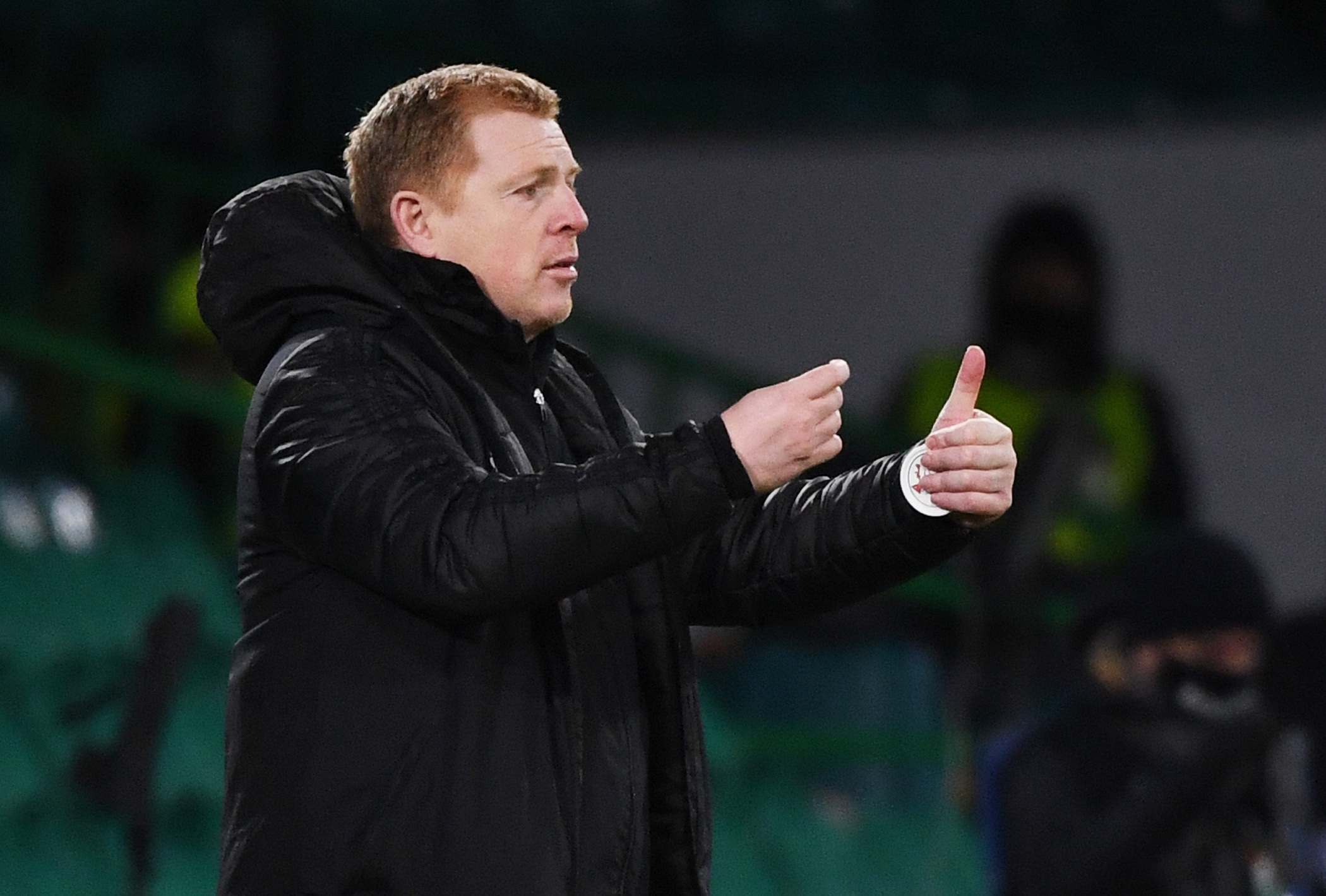 Neil Lennon has won just four of his last 14 games – but has now won two on the bounceCredit: EPA

He told A Celtic State of Mind podcast: “I think it’s a concern that the ownership control of Celtic vests on two people; Dermot Desmond and a guy called Nick Train who runs an investment firm in the city.

“Now, it’s nothing personal against Dermot Desmond. Having a billionaire in your corner during a global pandemic is a good thing on balance.

“It’s just a matter of fact thing. It is not a healthy thing to have the control of the football club vested in two people.

“Particularly when one is a financial investor with no emotional investment in Celtic. If the shares double or treble, that guy sells his shares and he’s gone.

“He has no interest in the ongoing future of the football club once he’s cashed his chips in.

“Again, that’s his business. It’s not an indictment or anything bad, his motivations are different.

“Basically, there is a possibility, if the price was right, we could wake up one morning and find out control of the club has changed and we would have nothing to do to stop that.

“So that’s not a good thing and that’s why I got involved in the Trust.”

Disillusioned shareholders will have the chance to grill the club’s blazers at tomorrow’s virtual AGM.