CHELSEA pulled Callum Hudson-Odoi from Monday night’s Under-21 game as the winger closes on a loan switch to Newcastle.

England winger Callum Hudson-Odoi seems certain to exit Chelsea on loan, with Newcastle well placed to sign him for the seasonCredit: Getty

And he was one FOUR Chelsea subs eyed by Newcastle co-owners Amanda Staveley and Mehrad Ghodoussi in Sunday’s 2-2 draw with Tottenham at Stamford Bridge.

As guests of Chelsea owner Todd Boehly, the husband and wife duo were deep in conversation with west London counterpart Behdad Eghbali.

The Toon’s other three targets- Conor Gallagher, Christian Pulisic and Armando Broja – all came on, but Hudson-Odoi was again unused.

And the fact Chelsea withdrew him from a development squad match against Fulham suggests the Saudi-backed Toon are making their move. 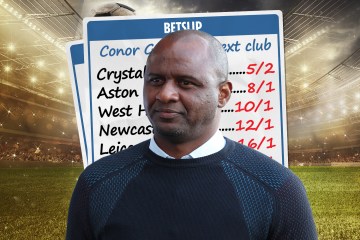 Borussia Dortmund, Juventus, Leicester and Southampton have also been linked with the three-cap Londoner.

But Newcastle are now strong favourites to complete a deal within days.

Prem clubs, however, can only borrow one player from each top-flight rival.

So Toon boss Eddie Howe might consider trying to buy one or more of the four fringe Blues he admires.

The replacements have been far costlier, in Marc Cucurella, Raheem Sterling and Kalidou Koulibaly.