WINDOWS have been smashed, stud walls and doors kicked to pieces, damaged furniture strewn everywhere and memorabilia ripped from walls.

But the damage done by yobs who broke into Bury’s Gigg Lane stadium while it lay dormant has only strengthened the resolve to herald in a bright new dawn for this famous old club. 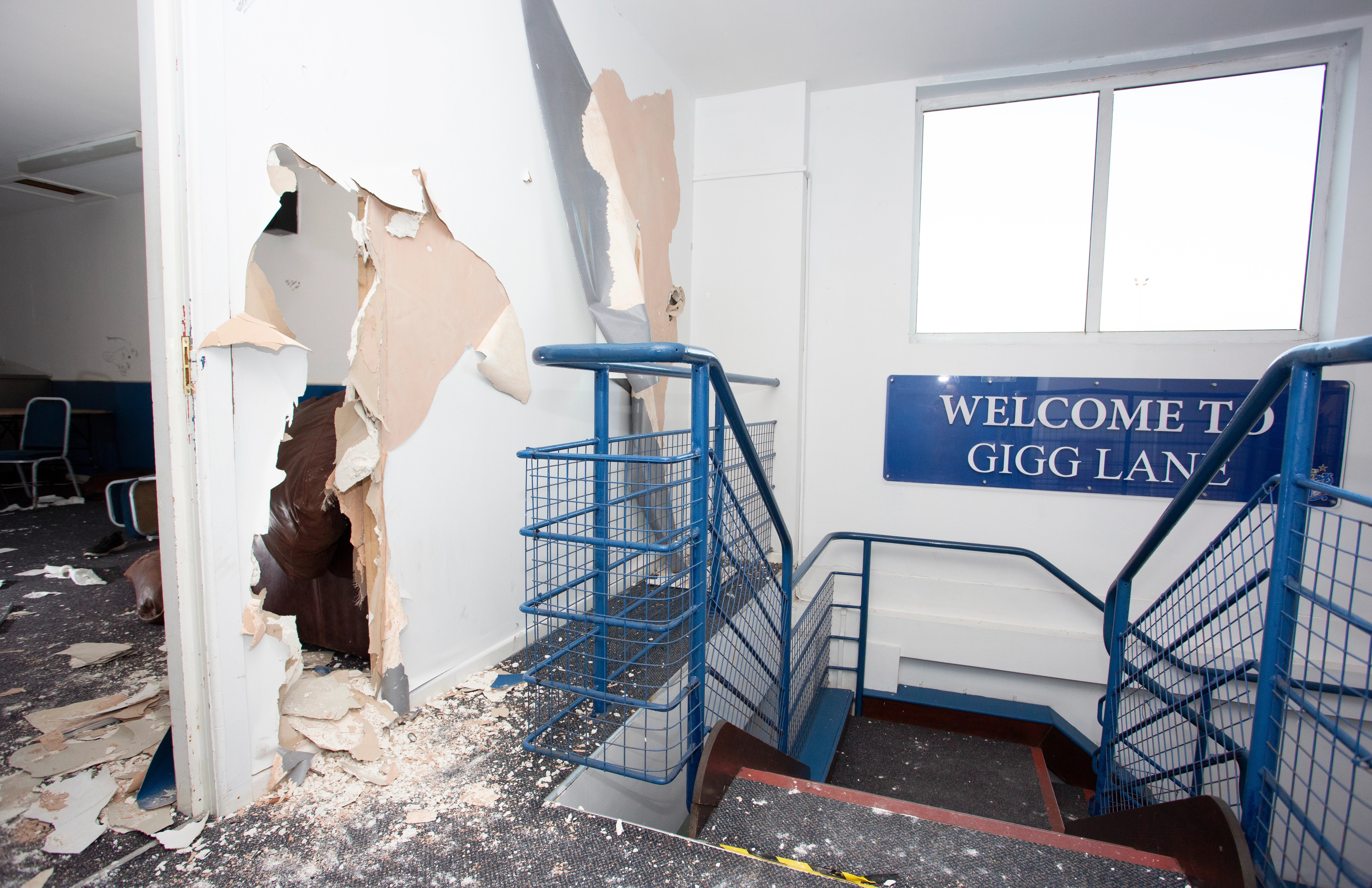 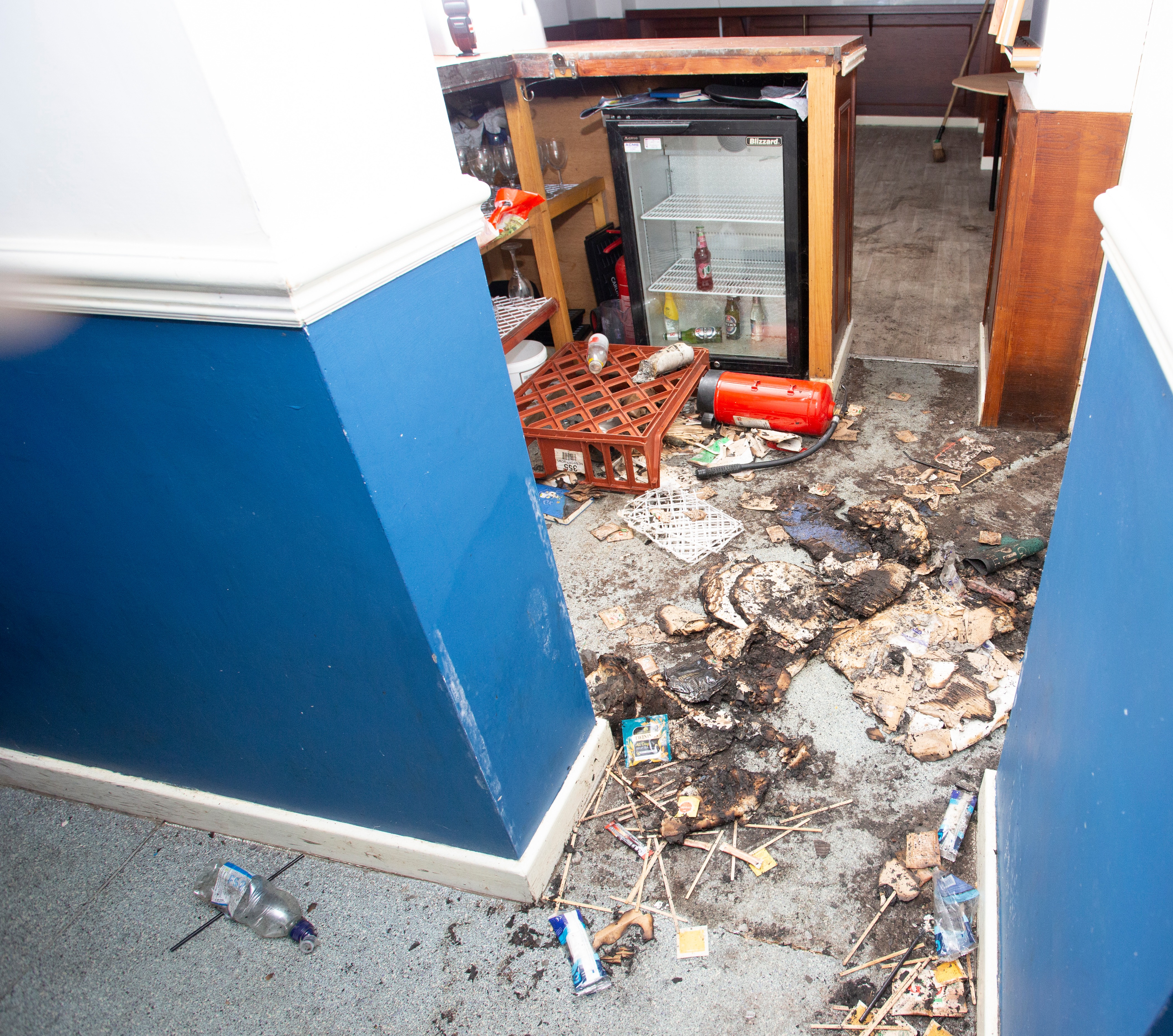 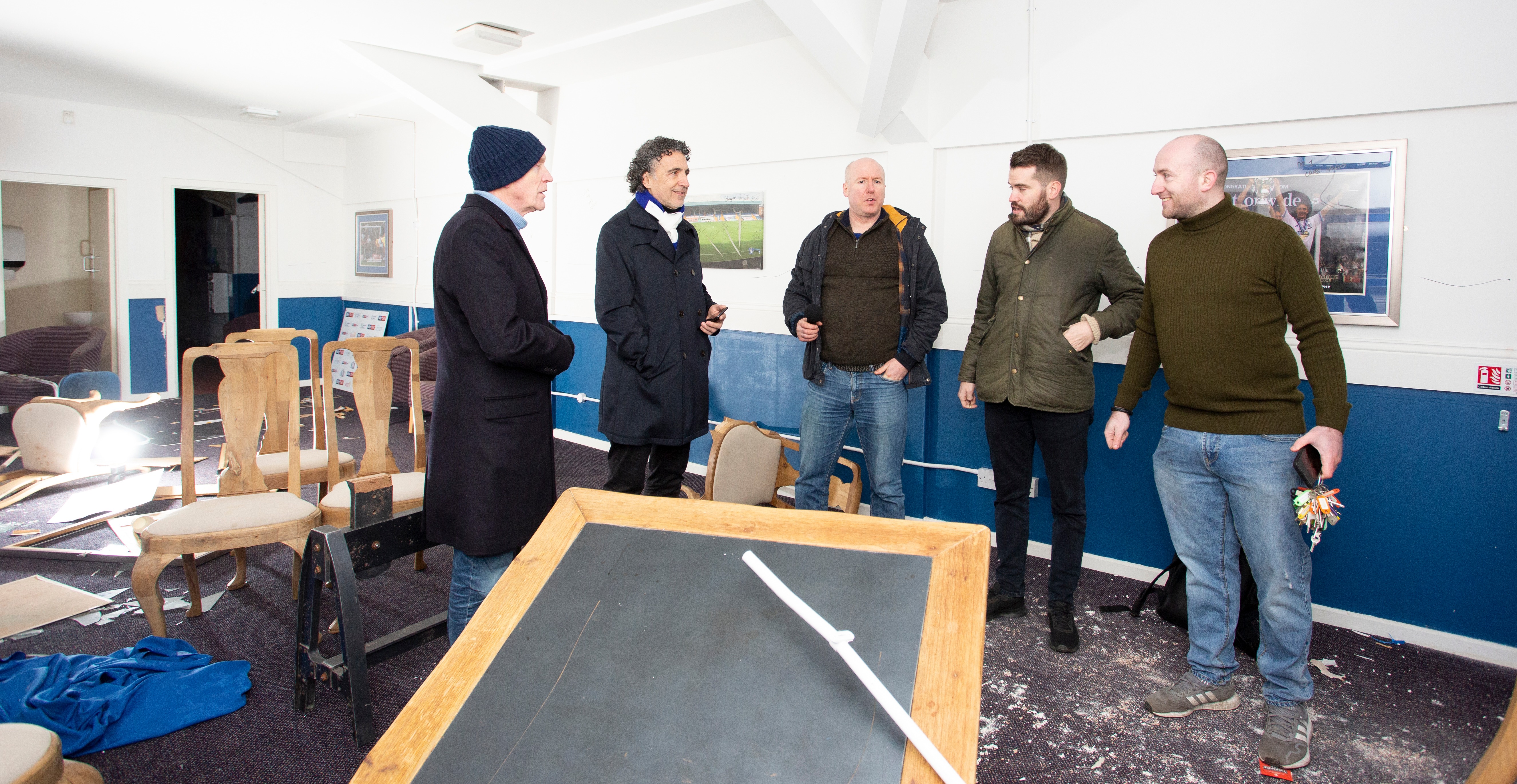 The two-times FA Cup-winning Shakers had the indignity of being expelled from the EFL two-and-a-half years ago after dodgy owners who cared little for the club or proud community it represents ran it into the ground.

As I tread the now bobbly turf with former club director Ian Pickup and fellow Est.1885 fans group members son Math Pickup, Antony Popadic and Dan Bowerbank, it is obvious they will, to lend an in-trend political slogan, Build Back Better.

The 1885-founded club and stadium is now owned by the fans-led group after they successfully acquired it from the in-administration holding company,

The Bury Football Club Limited (1892), which is expected to be liquidated.

Because the club and intellectual property rights have been released from the holding company before liquidation, Bury FC will be allowed to continue in their original format as long as they satisfy football creditors.

It is the same complicated process Bolton went through three years ago to stave off oblivion. 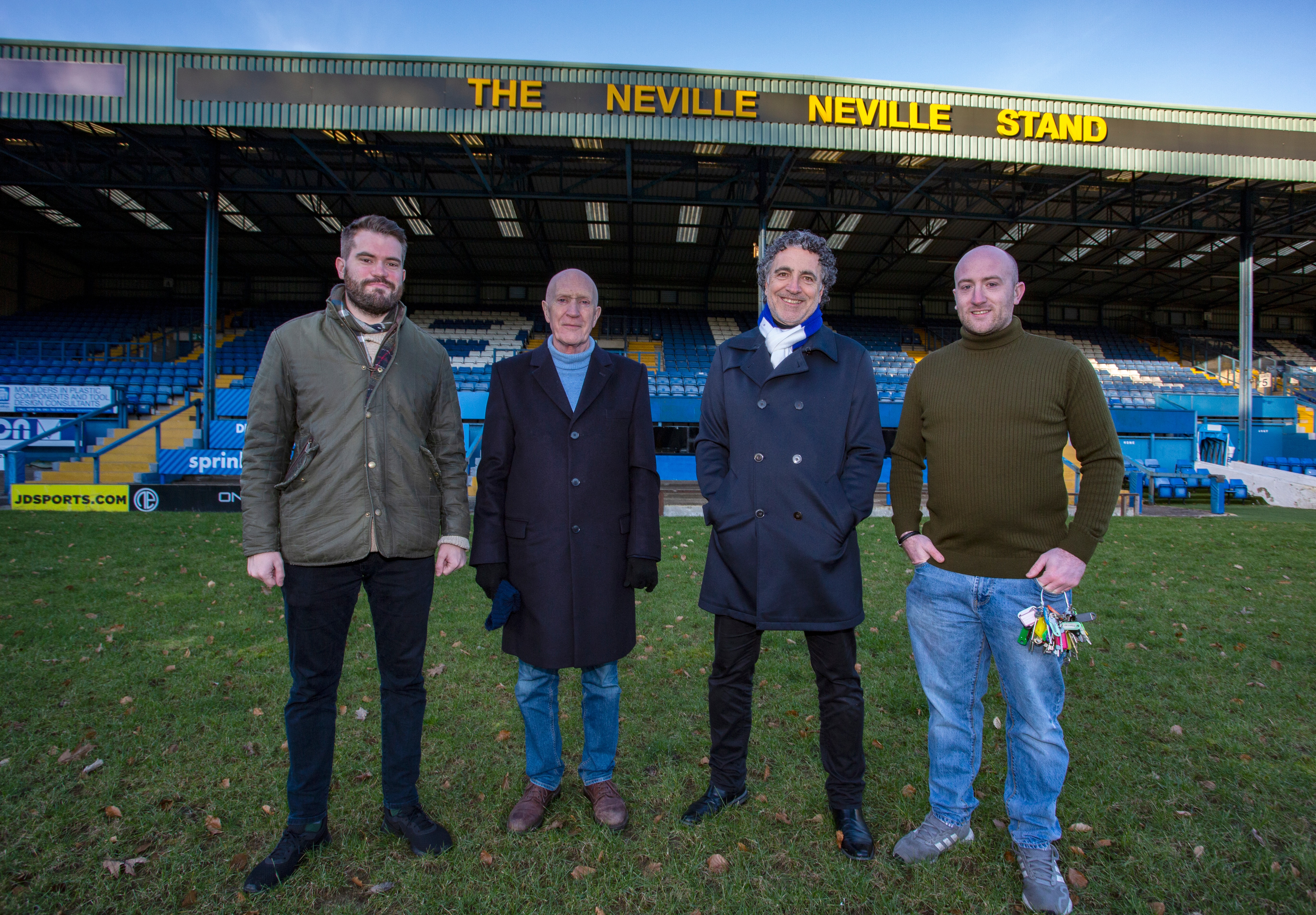 Matt Pickup, Ian Pickup, Antony Popavic and Dan Bowerman are excited about the future for the re-booted Bury FC, which is set to resume playing football this summer 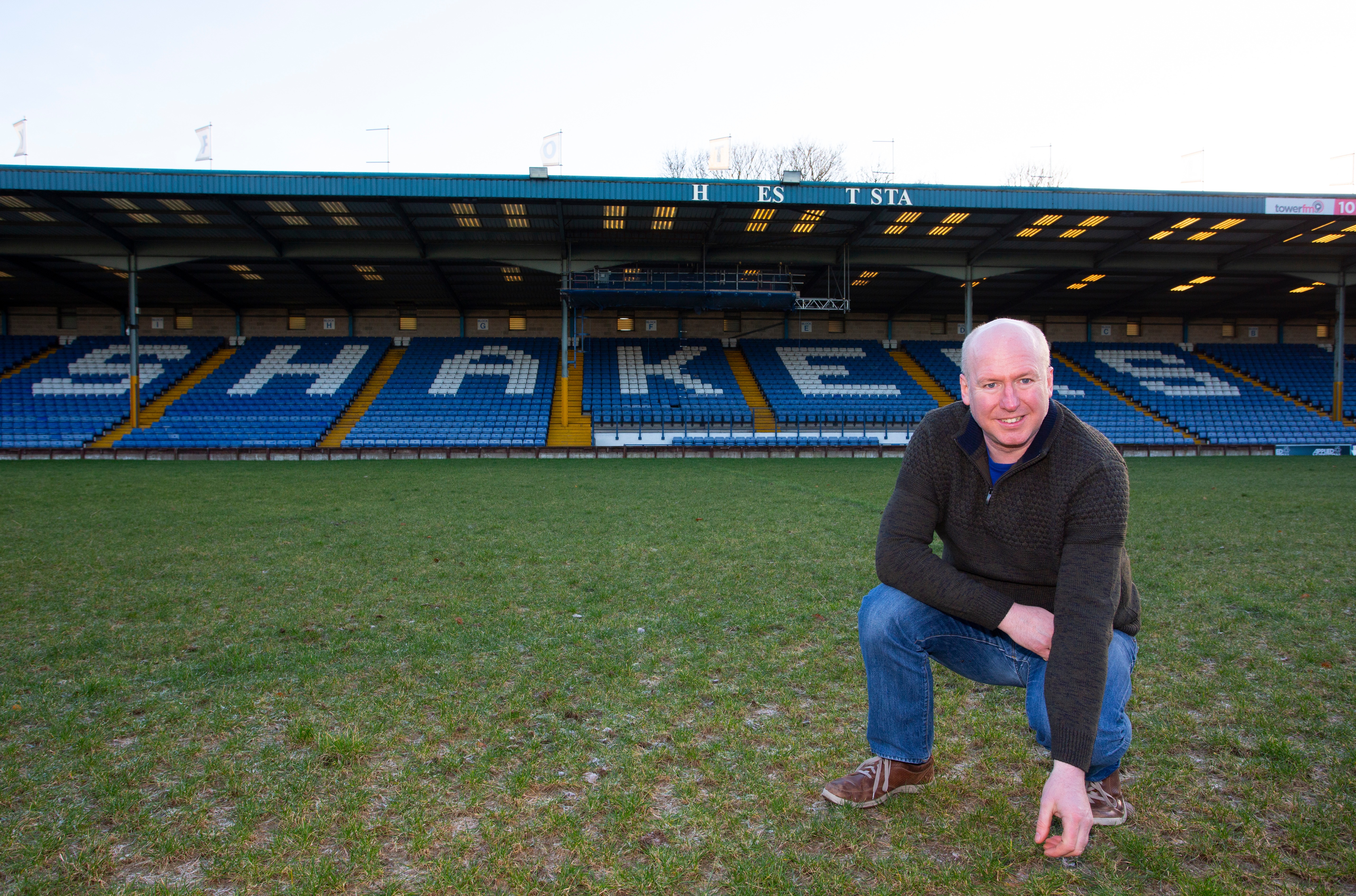 Justin Allen checks out the Gigg Lane pitch, soon be replaced by a £600,000 3G playing surface which will be a vital revenue stream for Bury FC

But now the real work begins before they can kick off the 2022-23 season in August with the FA expected to announce which league they will be placed in during July.

And it starts with a £600,000 project to install an all-weather 3G pitch, which will be hired out to the public.

“The 3G pitch is central to our business plan. It’s a no-brainer. There’s an upfront expense but it’ll soon pay back itself – and the top surface doesn’t have to be replaced for 10 years.”

The club hope to open a public gym and accommodate a NHS facility.

Only last month, the Shakers were successful in obtaining a £1million handout from the government’s levelling-up department – and they are working to get up to £450,000 from the council, as well as various grants from bodies such as the Football Foundation. 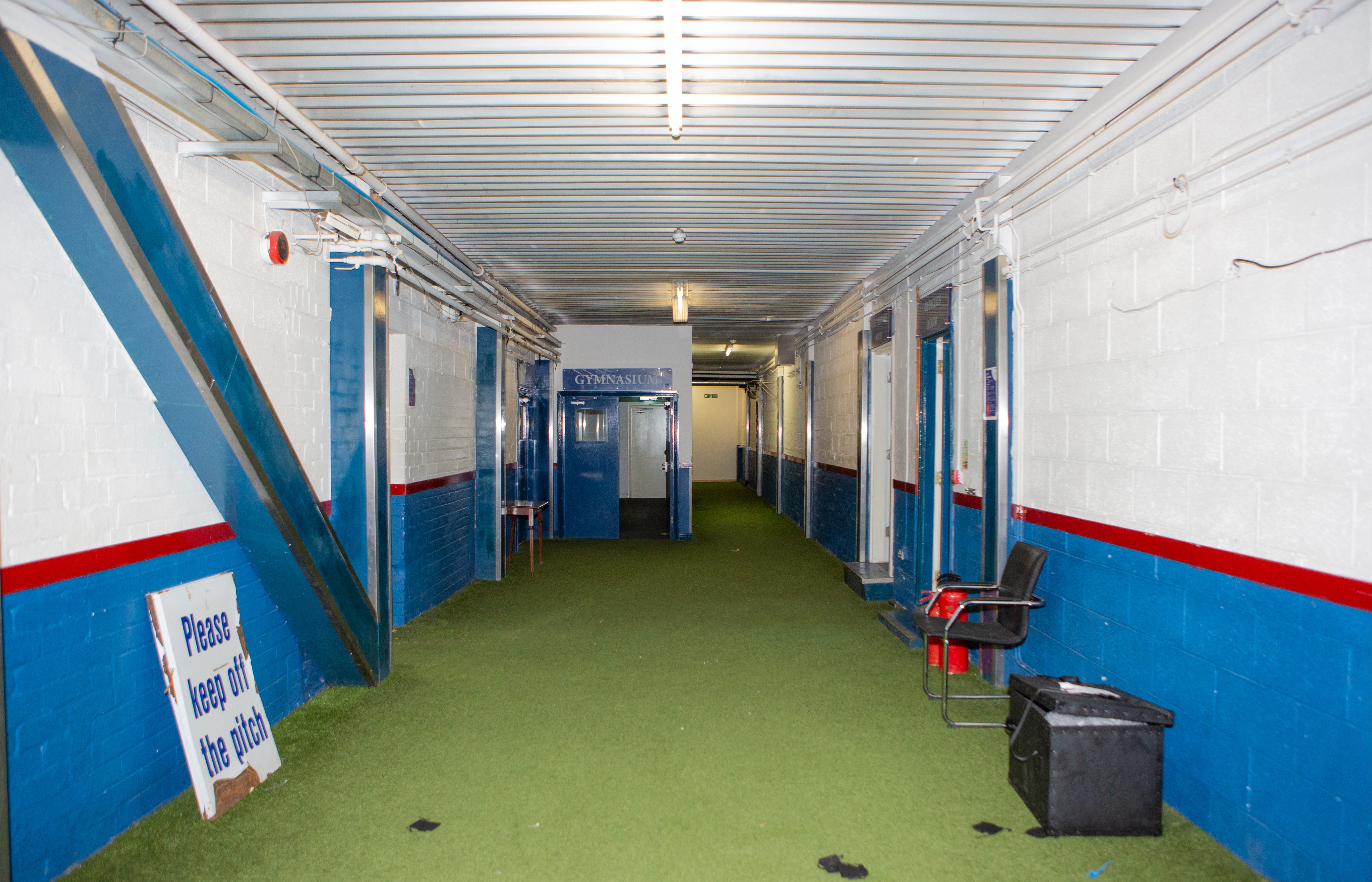 A dormant corridor at the stadium 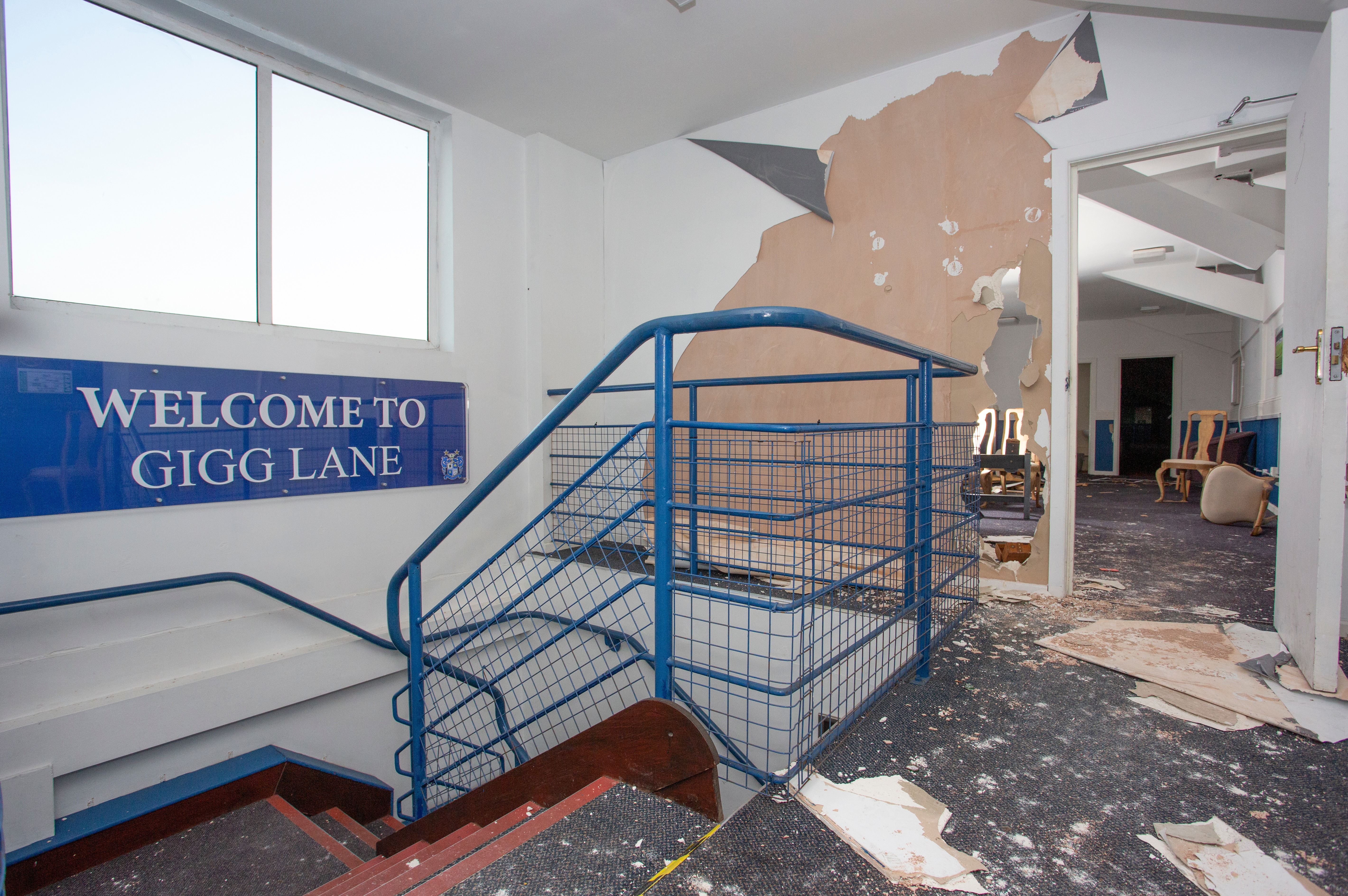 The press room wall has also been kicked through

Ian Pickup, 76, said: “The government grant is based on Gigg Lane being a community project.

“The council is happy because we’re devoid of these facilities in Bury.

“Part of us wanting to get the club going again is for the benefit of the residents and local economy, which has suffered because of our expulsion from the EFL and the pandemic.”

The clean-up and revamp of Gigg Lane will be a community effort too.

As we walk around the once thriving 1885 hospitality suite and directors’ lounge and survey the broken glass, and boarded-up windows, Popavic revealed around £70,000 needs to be spent on repairing the facilities.

But some costs are being avoided because of the generosity of local businesses. 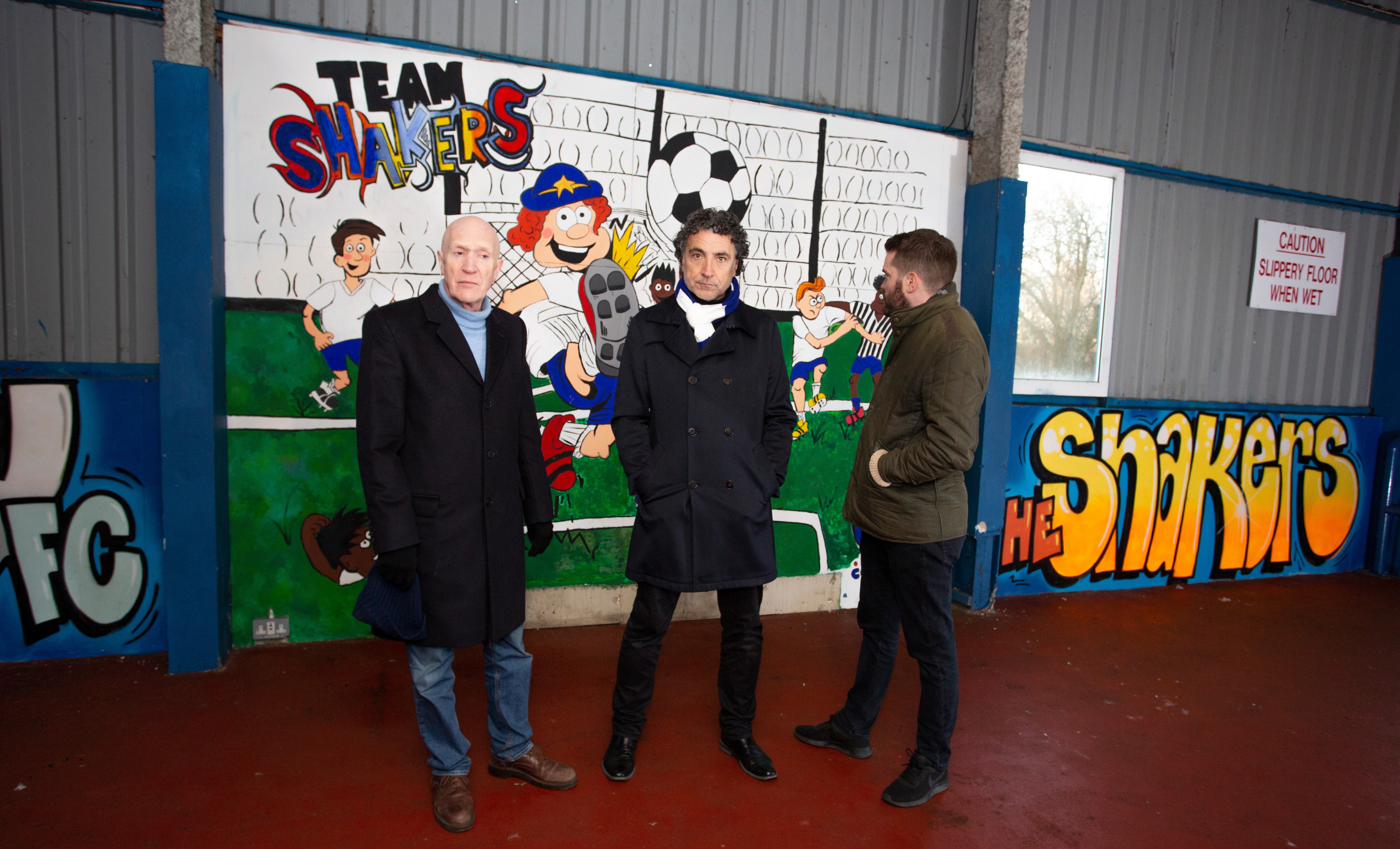 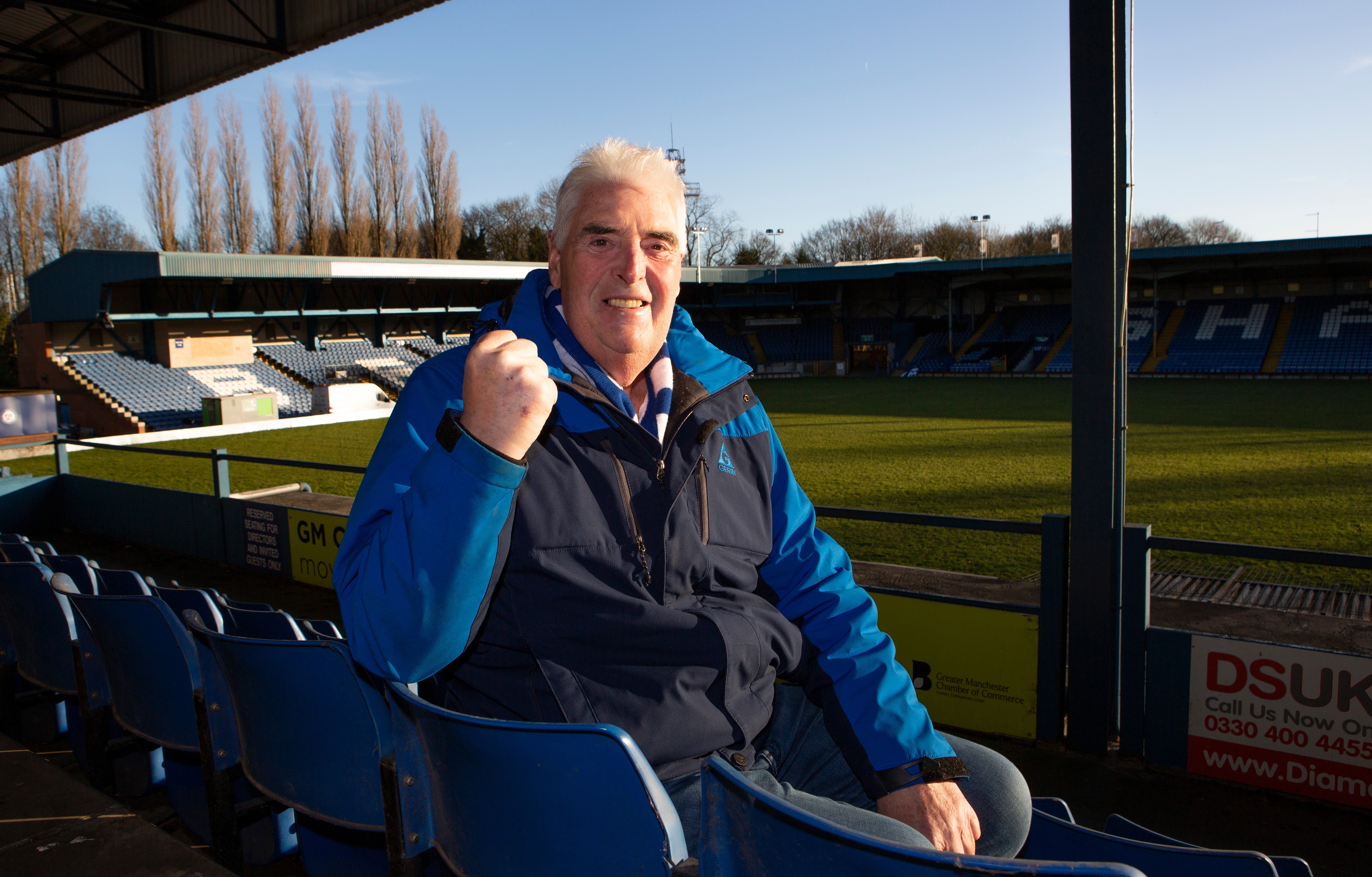 He said: “Pino Liotti, a fan for more than 40 years, owns family window business Trident. They’ve offered to replace the glass for free.

“A sparky helped us get the power going again in the stadium – although we’ve not switched on the floodlights yet as they cost £600 to run for ONE GAME!

“We’ve appealed for an army of volunteers to help us clean the stadium. We’ve had so many offers of support, which has been humbling.”

Although there are areas of the ground that will need repairing, there are plenty of areas that feel as though the last 19 months has not happened.

Outside the stands are in good condition and there is nothing a good lick of paint here and there cannot address.

The referees’ room has a broken window but the home and away dressing rooms are in good condition. The medical room and what used to be a gym look fine too.

While I was at the stadium, lifelong fan and season-ticket holder Peter Whitnall, 75, arrived so he could sit in his regular reserved seat.

He said: “I’m going to hospital for a knee op and don’t know how long I’ll be laid up so wanted to experience sitting here again.

“It’s wonderful the club is about to reopen. I believe we’ll get bigger crowds than we did in our last season in the EFL!” 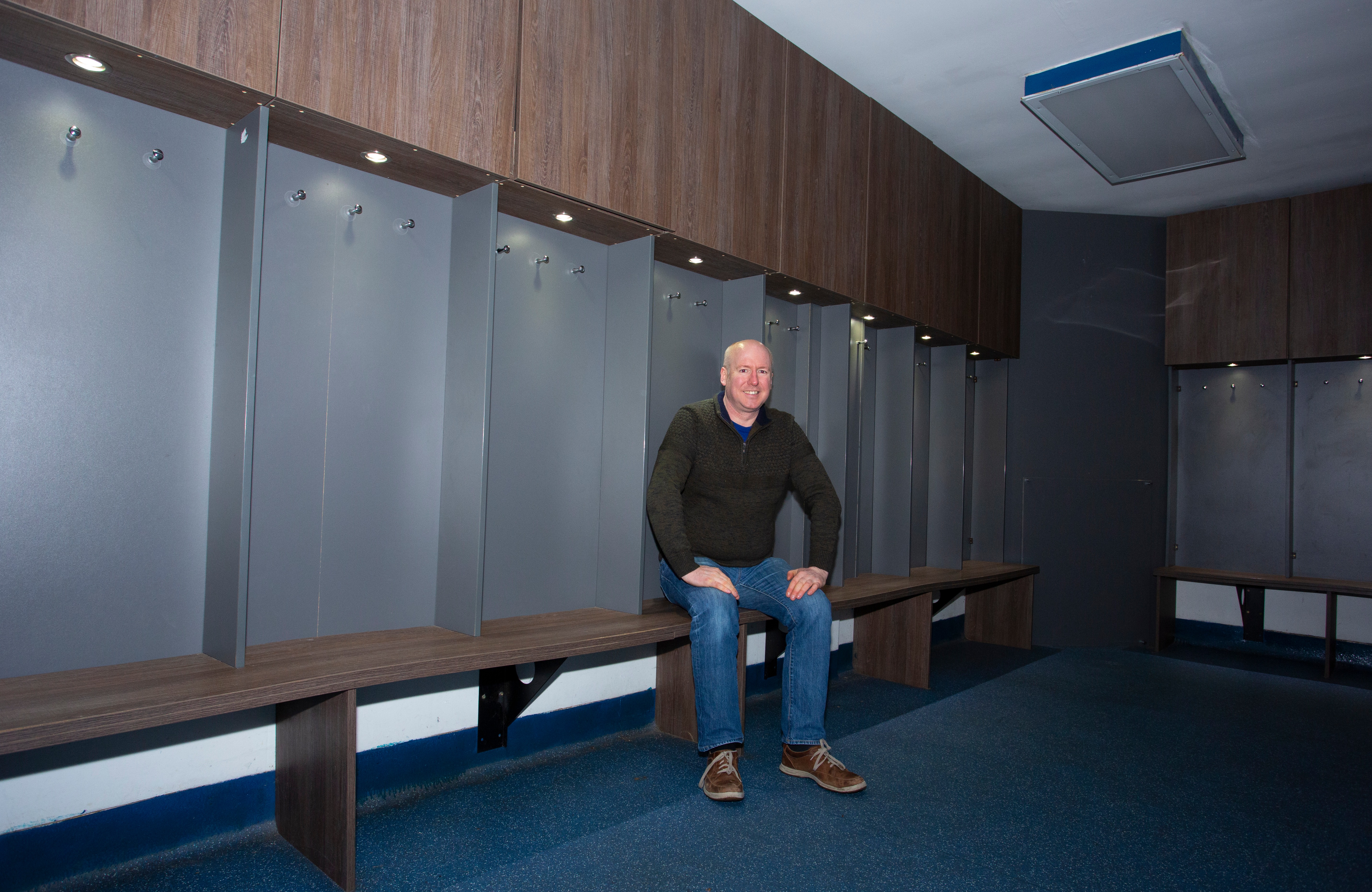 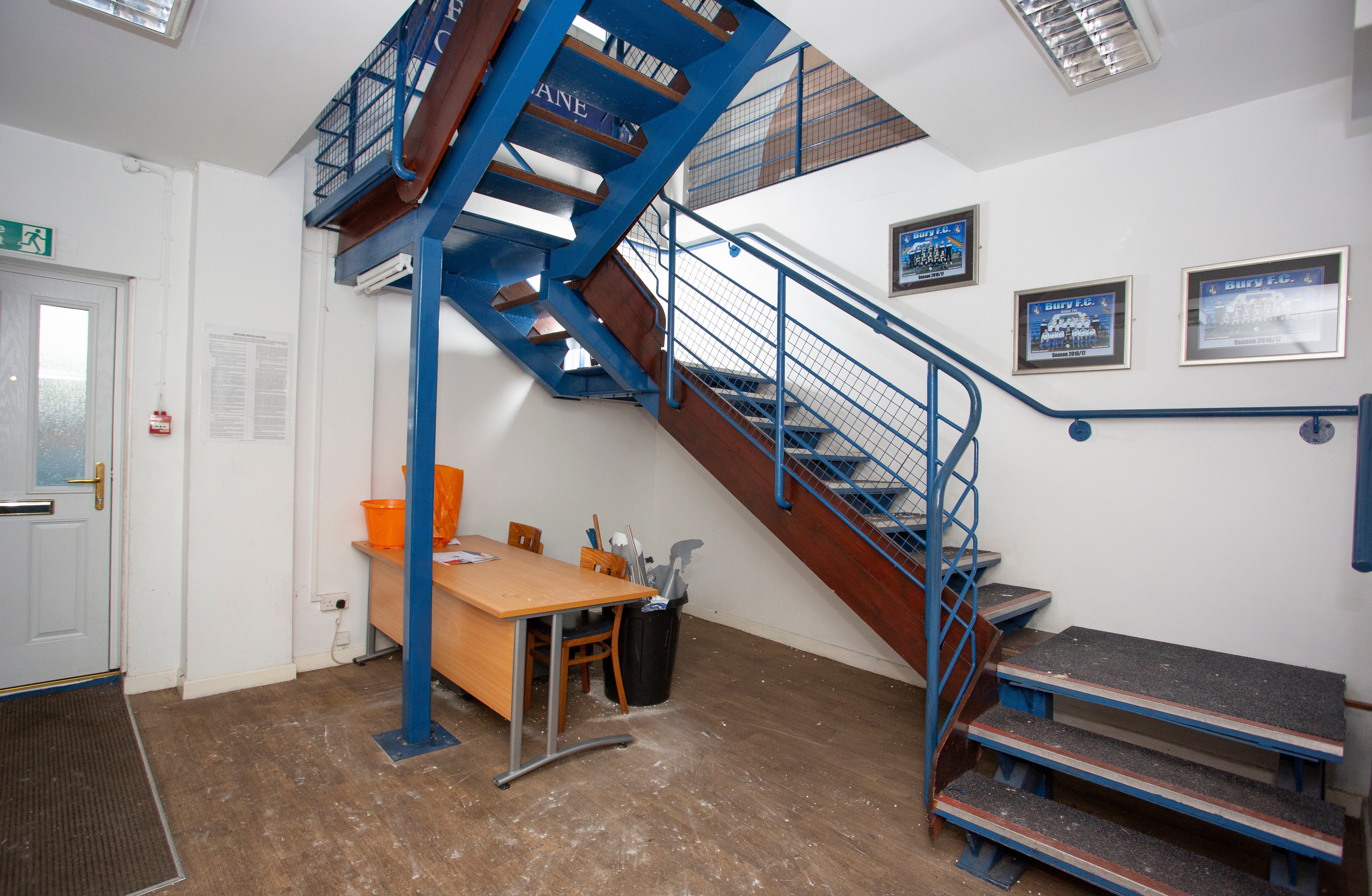 The stairway in the main stand is in good condition

The club will use a German model of being 51 per cent fan-owned so there can never be a repeat of an owner running up huge debts and scarpering like Stewart Day did in 2018.

California-based Bury fan Peter Alexander is one of Bury FC’s main benefactors. But rather than wanting a return from his investment, one idea he suggested was to name one of the stands after his late grandfather and lifelong Shaker Arthur Ashworth.

Bury also want to build bridges with local companies who had fingers burnt by previous regimes – plus restoring relationships with other clubs and football authorities including the EFL.

There is still bitterness around the town about how the EFL allowed their club to be ruined.

Math Pickup, 36, said: “Traditionally we had a good reputation throughout the EFL and with the bigger clubs too but that eroded.

“I personally don’t care what division the FA put us in as long as I can sit in my seat at Gigg Lane again, watch Bury and eat my pie! We must stay humble, embrace non-league and enjoy the ride without spending beyond our means.

“It’s time to draw a line. This is a new era. We want to build positive relationships, including with the EFL.”

Another group of Shakers fans formed a new supporters-owned club called Bury AFC which plays at nearby Radcliffe as they feared Bury FC could not be saved.

They are currently top and unbeaten in the North West Counties League First Division North, the 10th tier of English football.

Because Bury FC will remain in its original entity, the FA does have scope to place it in a higher league because of their history and standing.

A working group from both clubs are in dialogue in a bid to bring the two groups together under one banner. 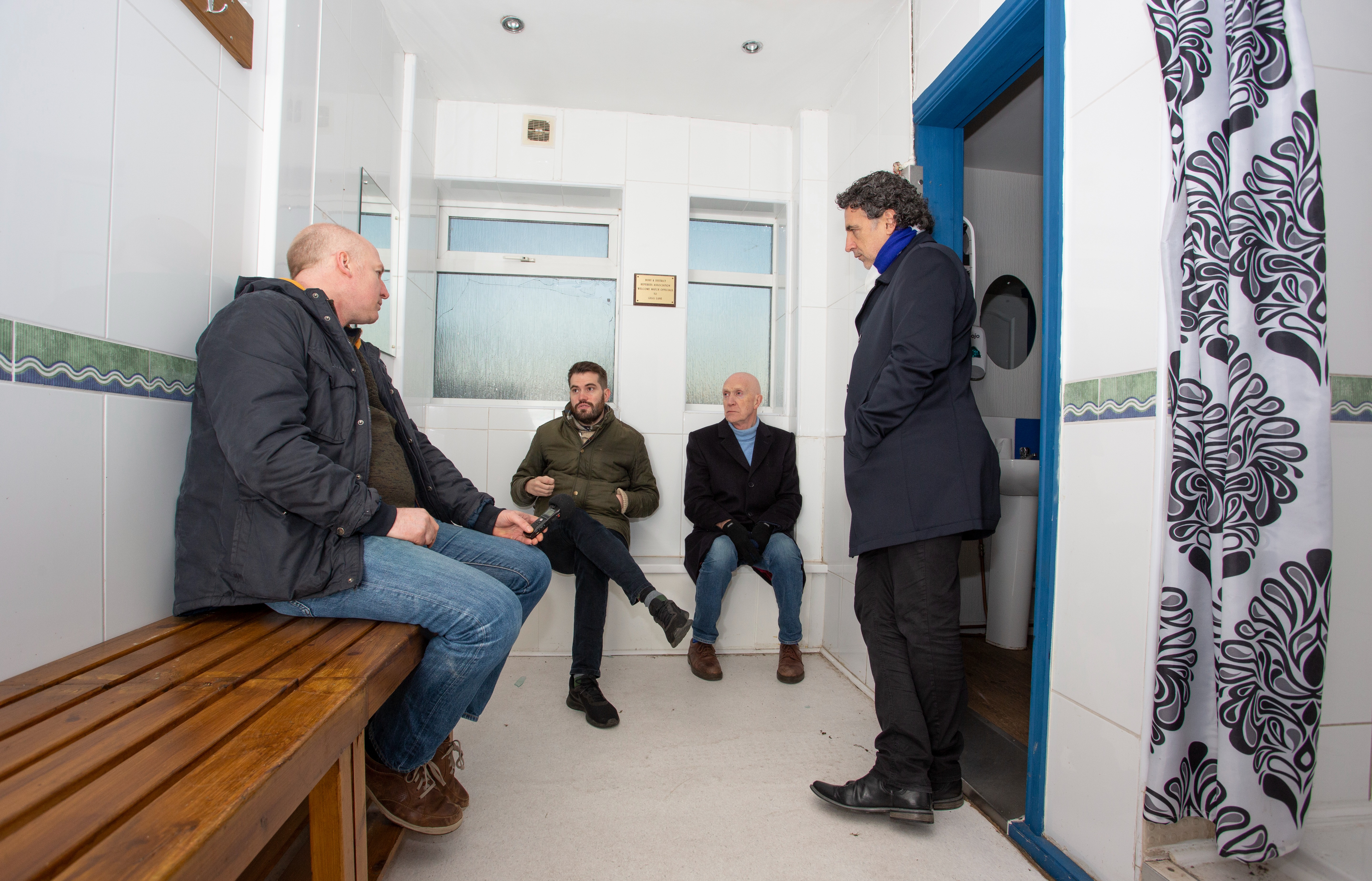 Math Pickup added: “It’s vital we have a united fan-base and that’s what most people want. We’re not miles apart in what we want to achieve so hopefully the talks have a positive outcome.”

Popavic added: “There’s an entire drawer full of wrongs we want to put right – but however aggrieved we feel that doesn’t give us any entitlement.

”Despite the damage Day caused the club, he inadvertently SAVED Gigg Lane.

Popavic explained: “He sold off 300 car parking spaces in front of the stadium on 25-year leases, as part of a Ponzi scheme a decade ago. That ultimately prevented interested housing developers buying and bulldozing the ground.

“Although you can build on the stadium, you wouldn’t be able to get access to the houses because the land in front is leased out.”

So maybe the Gods are smiling down on Bury after all.