HE is the only Brit still in the running, smashing and volleying for a Wimbledon singles victory next weekend – but you would never guess it from Cameron Norrie’s accent.

Born in South Africa, raised in New Zealand and educated in the US, our No1 men’s ace speaks with a Kiwi drawl.

World No12 Cameron, 26, swings into action today for his first ever grand slam quarter final, against one-time world No7 Belgian David Goffin, 31.

He is flying the Union Flag after our last hope in the ladies’ singles, Heather Watson, crashed out in the round of 16 to German outsider Jule Niemeier.

But humble, quietly spoken Cameron, not known for shows of emotion on the court, is taking it all in his stride. He says of carrying home hopes: “Unfortunately, I’m the last one standing. But it’s even more reason for everyone to get behind me.”

That is if they even recognise him. Despite having played all over the globe and netting more than £5million in prize money, Cameron — or Noz to his mates — is far from a household name. 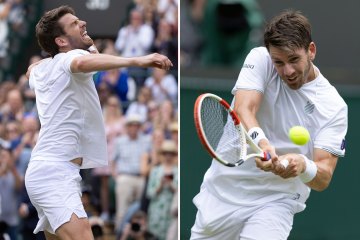 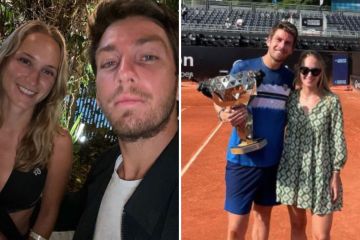 Which does come in handy for his morning commute to the Wimbledon tennis. Cameron owns no car and often prefers to hop on his BIKE rather than into one of the chauffeured Range Rovers offered to players by the All England Club.

He and his girlfriend, glamorous US fashion designer Louise Jacobi who he met at the US Open, live in Putney, South West London, so not far from the tennis in SW19.

Turning up there yesterday for practice, on his trusty bike, he said: “Every other day I’ve been cycling in — I have too much to do on other days. And I always cycle to the NTC (National Tennis Centre in nearby Roehampton).

“I don’t even have a car. I’m not a proper cyclist, I have a little single-speed bike that makes it tough with the hills. Honestly, I’ve not been recognised cycling at all but it’s nice to beat the traffic and it’s a good warm-up, for sure.”

He was born in Johannesburg to Welsh mum Helen and Scots dad David, both microbiologists, who have been at Wimbledon to cheer him on this year. Like previous adopted favourites of British tennis fans — Canadian-born Greg Rusedski and Aussie-born Johanna Konta — he will be willed on by the home crowd as one of their own as he goes into battle today.

His fellow Brits in the men’s and ladies’ draws have all now been sent packing. Two-time Wimbledon champion and former world No1 Andy Murray has been valiantly battling back from his 2019 hip op but went down to 6ft 10in thunderbolt server John Isner in the second round.

Emma Raducanu, shock winner of last year’s US Open at age 18, also bowed out in round two, to French Caroline Garcia, after struggling for form this year. Jack Draper, Liam Broady and Katie Boulter were others who dared us to wildly dream but were back in the locker room all too soon. But Cameron holds his Brit heritage dear — if not the climate.

He said: “My dad was born in Glasgow, my mum in Cardiff. I’ve been to Scotland a few times but don’t like the weather. I went to Aberdeen. That’s where my dad’s side of the family live. I’ve got cousins and uncles in Kintore.”

Cameron was raised in the tough South African city of Johannesburg until he was three. But after a neighbour was held at gunpoint, the family upped sticks and moved to Auckland, New Zealand.

It was there that Cameron discovered his passion and talent for tennis. He climbed to the No1 junior player in New Zealand and No10 globally. But at the age of 16 he chose the same path as Andy Murray – who trained in Barcelona as a teenager – to improve his chances abroad.

Dad David said: “Because New Zealand tennis is a backwater, we decided it was a better option for him to represent Britain.” Cameron once again packed his suitcase and headed to London for three year’s training.

Because New Zealand tennis is a backwater, we decided it was a better option for him to represent Britain.

But his gruelling training regime at the National Tennis Centre left him tiring of the sport. He said: “’I wasn’t used to playing so much tennis. It was good but I just wasn’t used to it. The LTA gave me a lot of help and a lot of coaching, and it was just too much for me to take on board. Everything was about tennis and I wasn’t used to that.”

He added: “I was just burnt out from tennis a bit after the juniors and I felt like I wanted to do something else.” In search of an alternative, Cameron flew almost 5,000 miles across the globe to enrol at Texas Christian University in Fort Worth. Despite not being religious, he was offered a scholarship in the sociology programme – thanks to his tennis abilities.

But he very nearly veered off course due to big helpings of Tex-Mex grub. He added: “I was eating in a lot of chains, a lot of Chipotle. I gained weight. After my freshman year I started making better decisions about my career and diet.”

Norrie later said: “College allowed me to mature a lot. My organisation wasn’t too great before that. Tennis-wise I got a bit bigger. In juniors I wasn’t really hitting the ball that hard. I got a little more explosive, everything improved for me. I got to relax and live a more normal life and worry about other things, rather than just focusing on tennis.”

In 2017 Norrie left university and decided to go pro for Britain. It was then at the Wimbledon warm up contest Queen’s he met Muzza for the first time. It was a meeting which – according to his dad – had a lasting impact on Cameron.

David said in 2017: “Andy came up to Cameron in the locker room at the Queen’s Club and introduced himself. They hit together quite a lot before Wimbledon and the experience of playing and preparing with Andy has shown Cameron just how focused you must be to reach the top.

“Cameron was amazed at how Andy didn’t want to waste a single ball in practice. He’s a great role model. He comes across so well. I don’t understand those who don’t like him. Off the court he’s erudite, witty and balanced. He shows great humility as well.

“He maybe knew Cameron lacked the courage to go up and introduce himself at Queen’s, so he did it himself, which speaks volumes.”

But the young player’s first wildcard outing at Wimbledon, in 2017, ended all too soon. Just 83 minutes into the first round, he was defeated by France’s Jo-Wilfried Tsonga.

As Covid hit in 2020, Norrie made the decision to head back to New Zealand. He said: “I took six weeks off from tennis, but I think that helped me in a way, getting to relax and live the simple life, not really playing but doing fitness.

“I started to practise towards the end, when there were no cases in New Zealand, so I maybe got two weeks’ advantage on some of the British guys . . . It was a good time for me. I felt really good being with my parents, catching up with them and making the best of a tough situation.”

Now quietly determined to get ahead in men’s singles, he turned to another corner of the world for a champion’s diet regime. He decided that like Austrian champ Dominic Thiem he would eat almost exclusively Italian food at restaurant Mamma Gina in the run up to Californian Indian Wells Masters.

Gluten-free Cam said: “I decided to do exactly the same. After my first visit I said I would come back if I won. Five or six nights in a row there. The exact same meal on match days. But I mixed it up on the other days, working my way through the menu.”

Remarkably the routine worked and Norrie beat Grigor Dimitrov to take the £800,000 cheque. He celebrated by landing a kiss on Jacobi. When asked what he was going to spend the money on, a typically understated Norrie said: “I’ve been using a shoelace as a belt so my girlfriend’s been nagging me to get a belt, so hopefully I’ll get a decent belt with the cheque.”

But he nearly missed out on the win – with someone stealing his three pairs of shoes ahead of the match. Norrie said: “I had everyone looking. I don’t know what the people have against the Brits with stealing the shoes, but I didn’t manage to get them back.”

He also has his parents back in the stands, watching him compete after missing the competition for two years due to Covid. And for Noz, it feels like he’s finally found “home”.

He said: “It feels really good to do it here at Wimbledon, at home. I could not be more happy to have my friends and family watching me.” 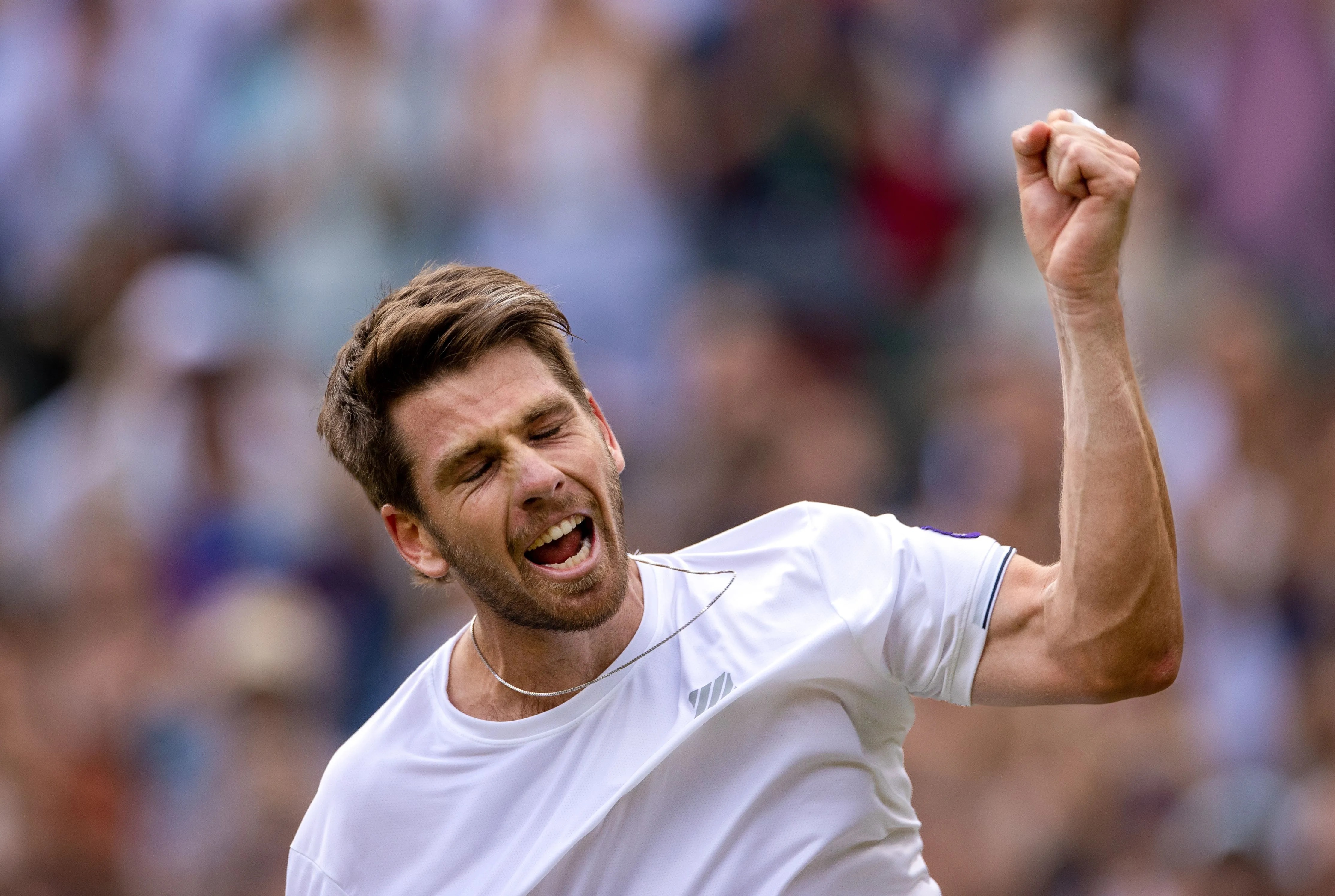 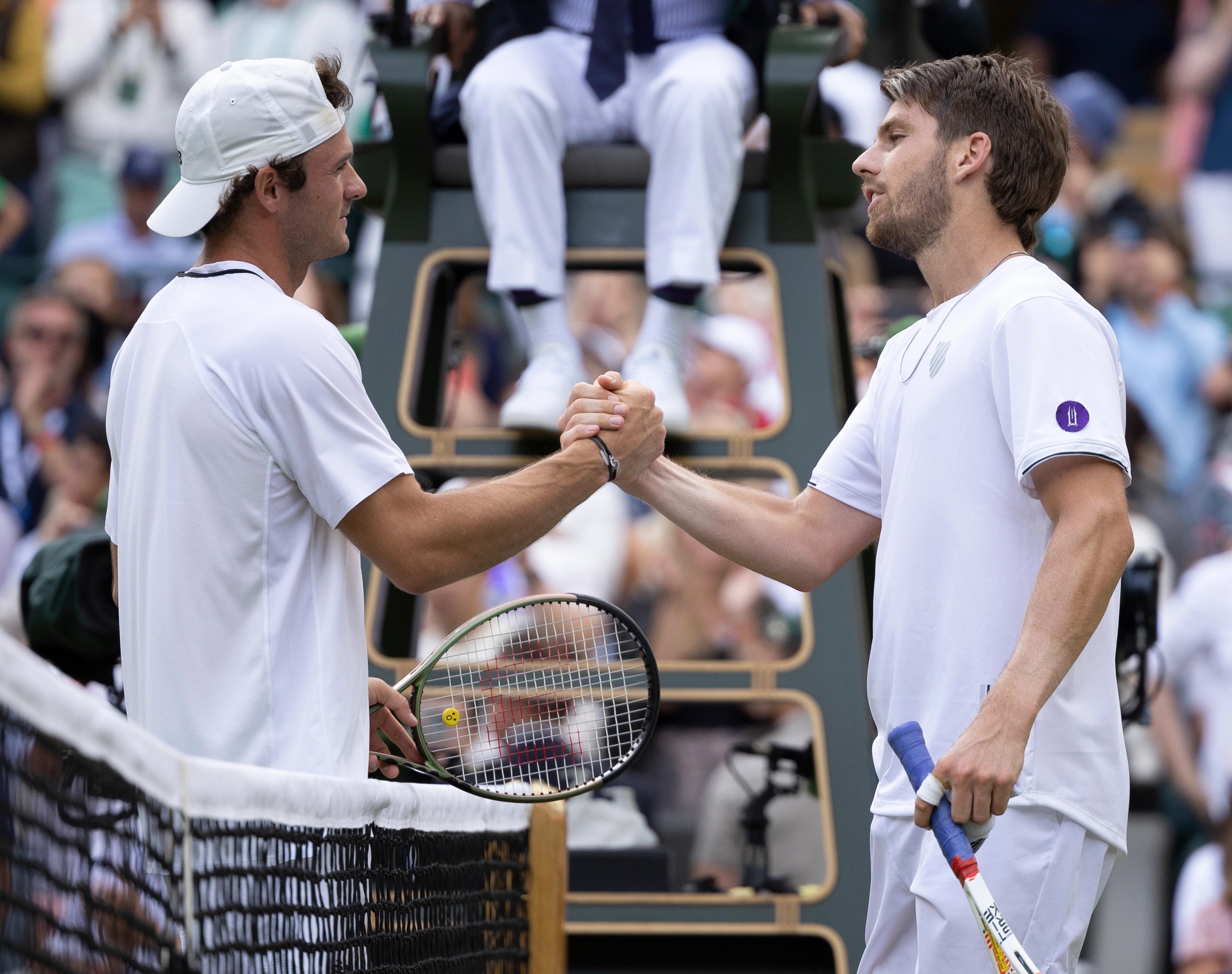 The ace, here with US star Tommy Paul, turned up yesterday for practice on his trusty bikeCredit: Richard Pelham / The Sun 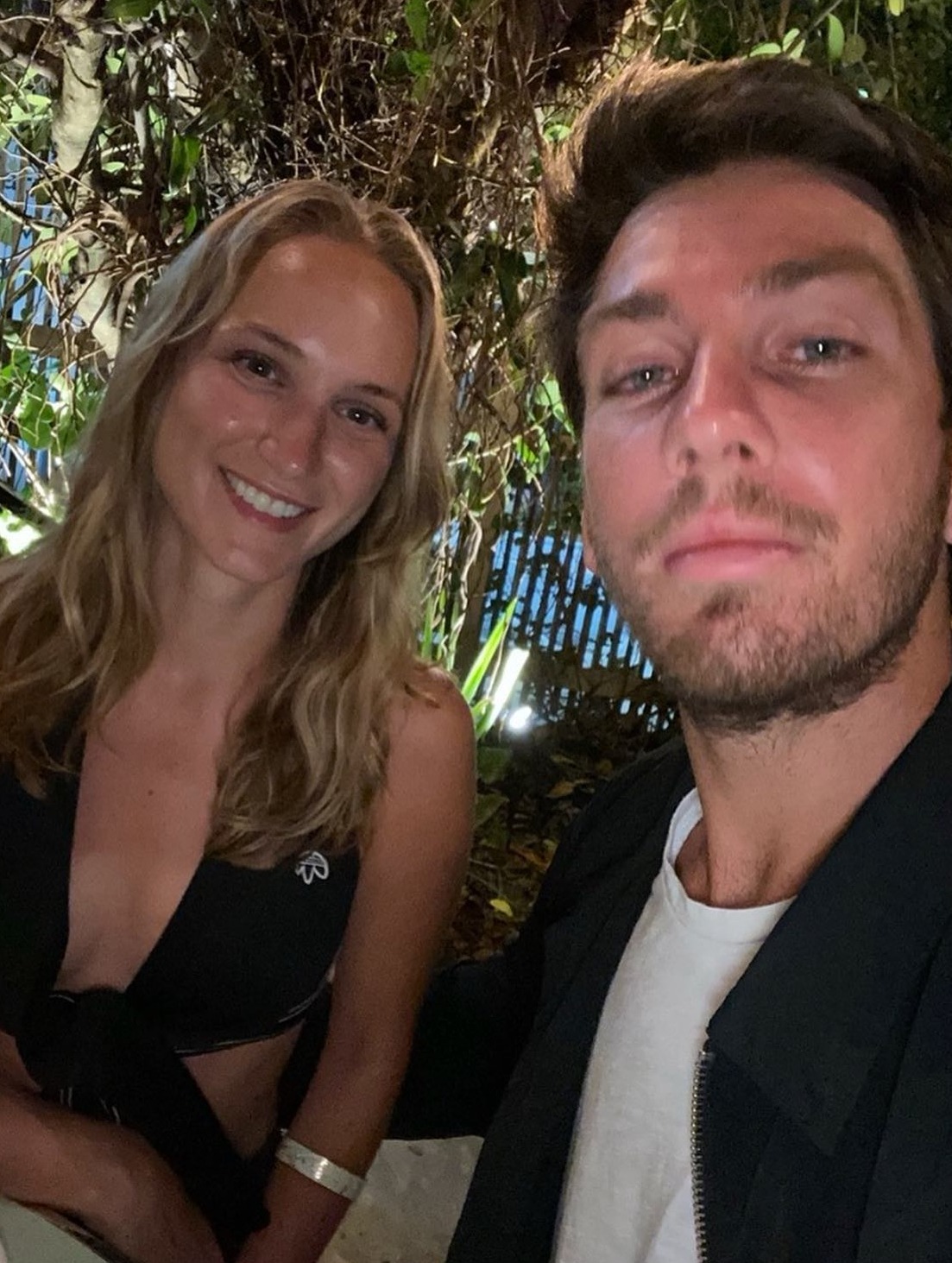 Here with Louise, the pro revealed ‘I don’t even have a car. I’m not a proper cyclist, I have a little single-speed bike that makes it tough with the hills’Credit: weezcobi/instagram 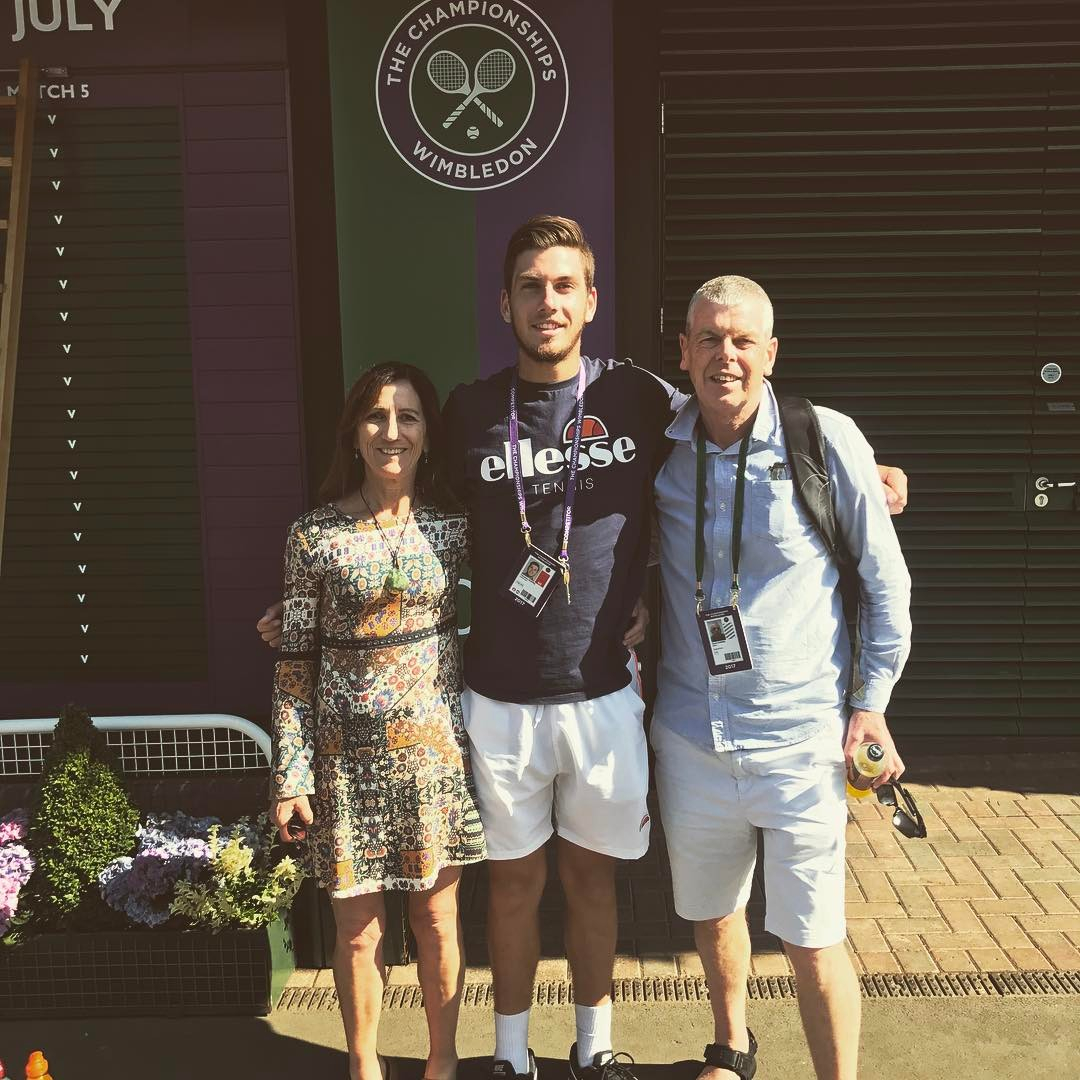 Cameron who is worth £5million, here with parents, will be willed on by the home crowd as one of their own as he goes into battle todayCredit: norriee/instagram