ANN-KATRIN BERGER helped Chelsea snatch a precious point at Man City with the champs on course to win their fourth WSL title.

The Germany stopper’s stunning saves along with goals from Sam Kerr and Pernille Harder saw the Blues secure a drama-fuelled 2-2 draw. 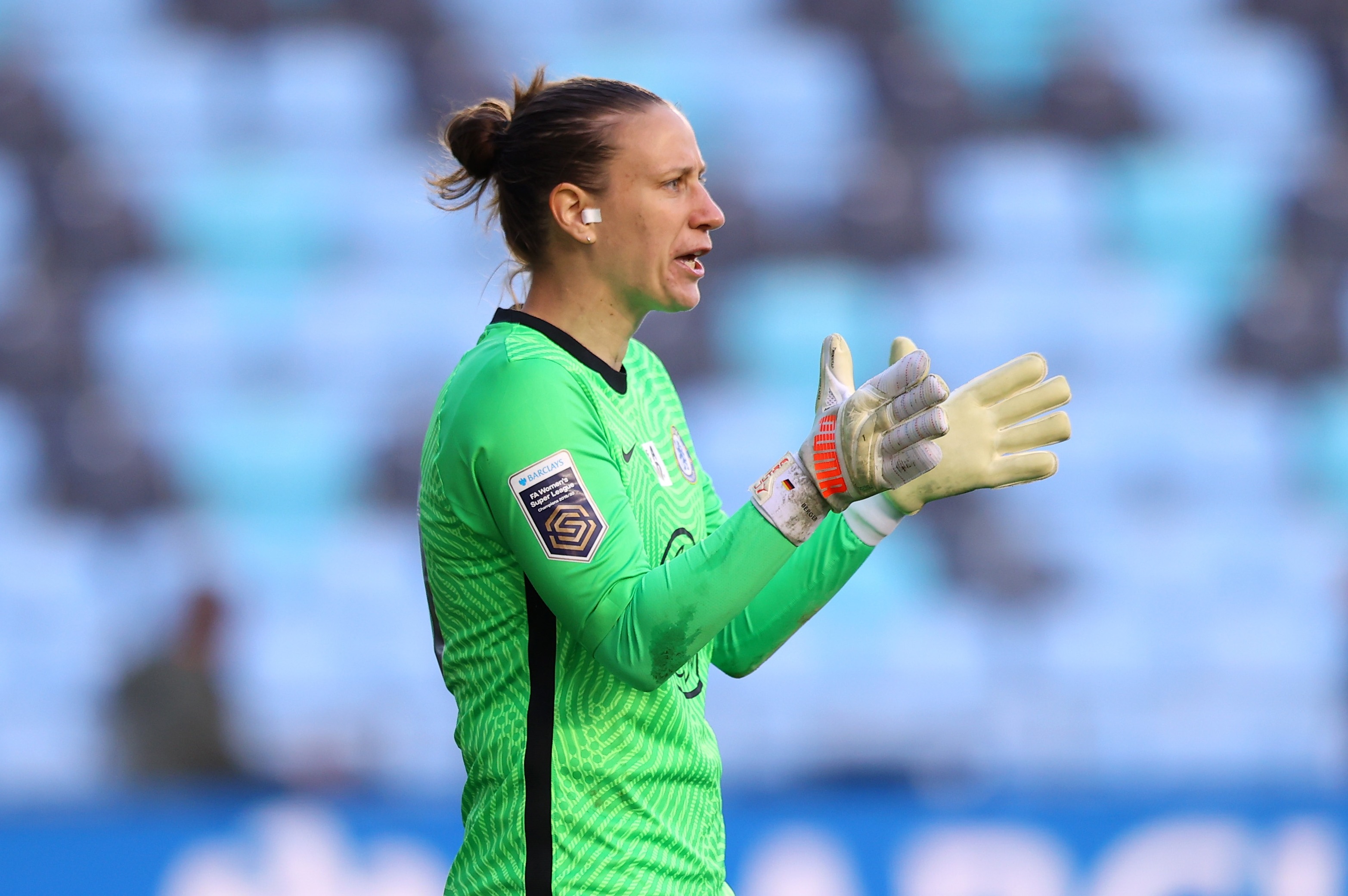 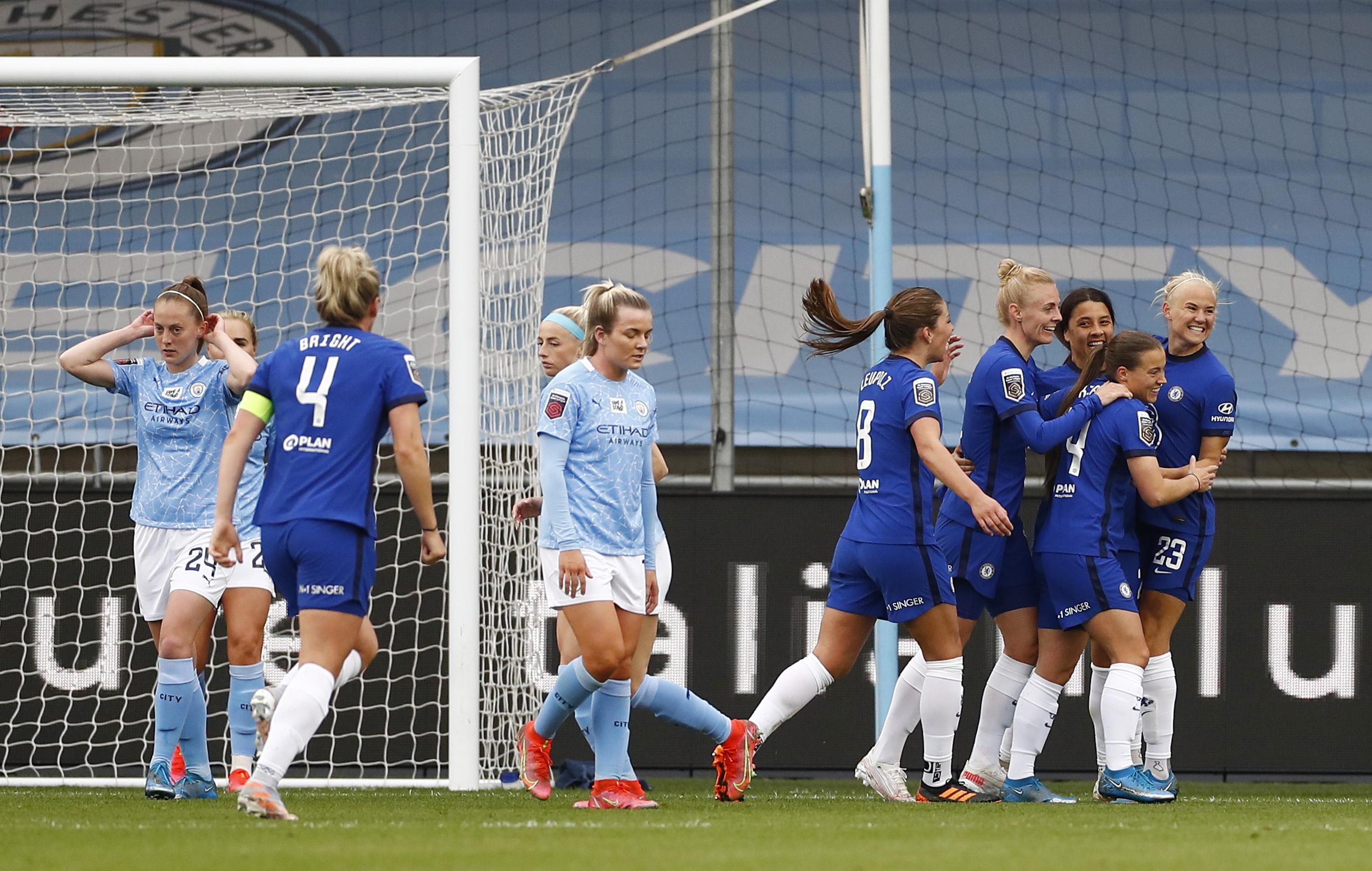 Chelsea could win their fourth WSL title if they win their remaining two league fixtures this seasonCredit: Reuters

The outcome saw the league leaders extend their advantage at the top by two points.

And the Blues are just two games away from becoming the first side to win back-to-back WSL titles since Liverpool in 2012 and 2013.

And Emma Hayes hailed Berger’s world-class shot-stopping with her team due take on Bayern Munich in the Champions League on Sunday.

Hayes said: “You can score goals to win games but the defence wins championships and she  (Ann-Katrin) is an unbelievable asset to the team.

“She is the best goalkeeper in this country, I think along with Christiane Endler they’re the best in the world and she’s improving.

“The more pressure she gets, the more she responds.

“My team is extremely resilient, and there’s a mentality within the dressing room that if we’re not playing very well, someone’s going to bail us out.

“I know (before signing Ann)  people thought I had wonderful goalkeepers.

“I knew what she was capable of and refused to let her play anywhere else.

“I wanted her here at this football club and she’s justified that decision fully, and more.” 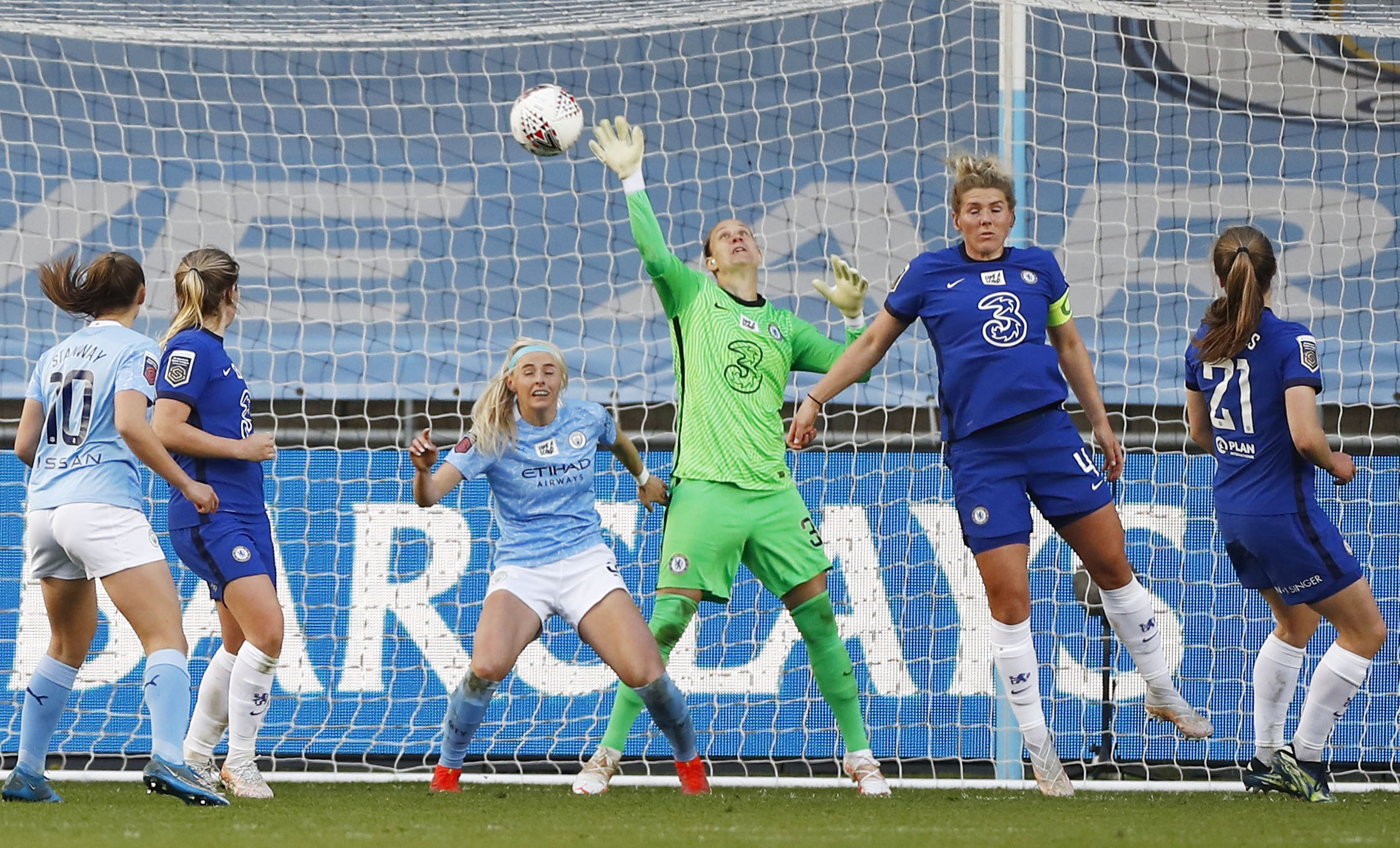 Berger and her team-mates will face Bayern Munich next in the Champions League semisCredit: Reuters

The highly anticipated bout between the WSL heavyweights lived up to its billing with both teams on the attack from the off.

The hosts threatened within the first ten minutes and had a decent chance to take the lead with Sam Mewis sending her close-range header over the bar in the ninth minute.

And Alex Greenwood headed the ball off the line moments later following a looping backwards headed effort from Sam Kerr.

The 0-0 scoreline lasted until the 24th minute with hotshot Kerr losing her marker to put the Blues in front with a bullet header.

But Gareth Taylor’s side refused to be bowed and hit back with an equaliser with a Chloe Kelly tap in four minutes later.

There was penalty drama close to the half-hour mark after Kerr was brought down by Ellie Roebuck.

While the City keeper appeared to have got the ball ref Rebecca Welch pointed to the spot with Harder converting to put the visitors ahead. 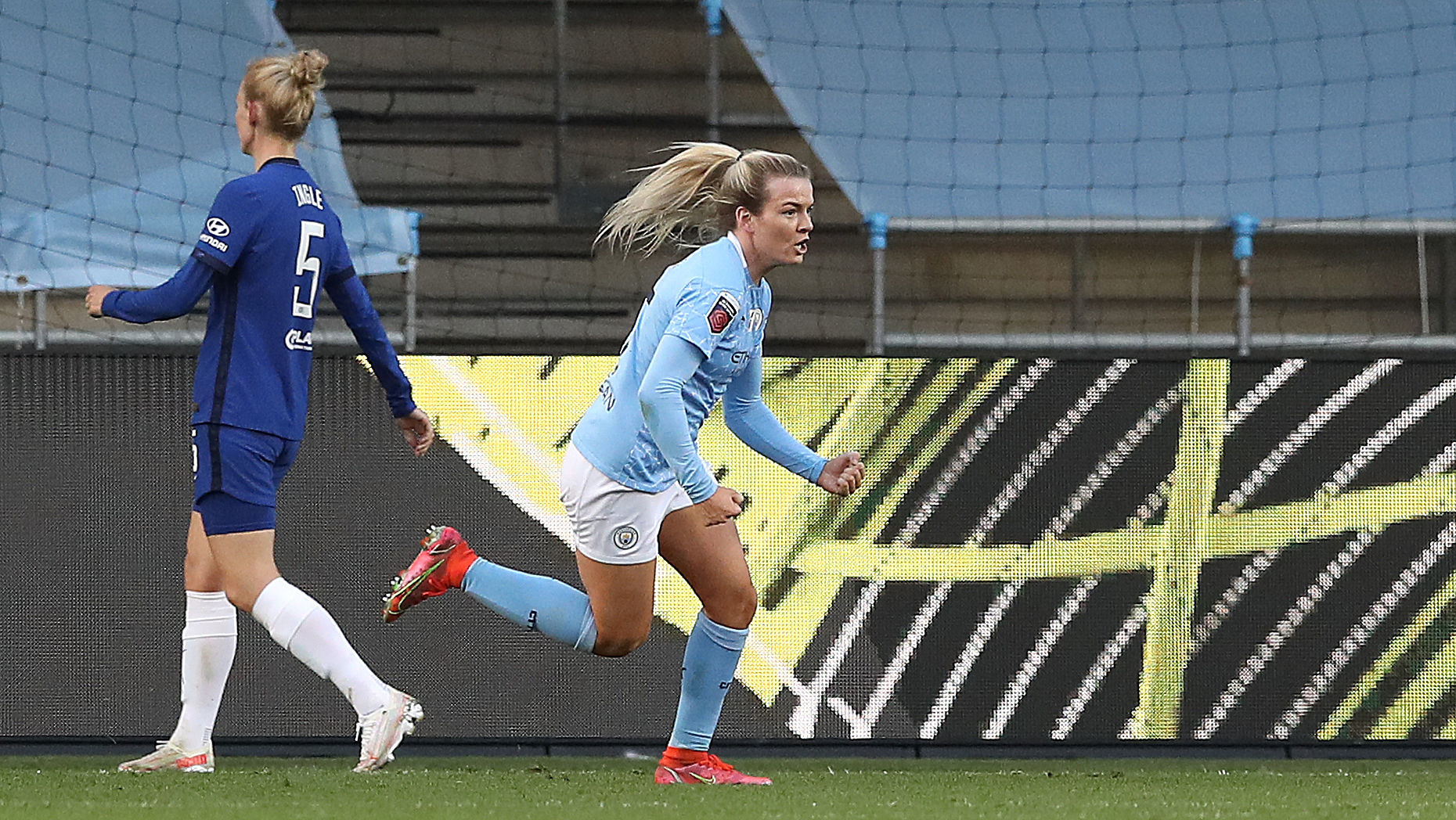 Lauren Hemp was on target for City who came close to snatching a third goal against Chelsea late on in the gameCredit: PA

The second half was just as frenetic as the first with the game becoming stretched as Man City searched for an equaliser.

And they got one with Chloe Kelly taking advantage of an awkward Fran Kirby pass to set up Lauren Hemp.

And the England winger poked home a leveller for City with 16 minutes of normal time remaining.

Moments later Hemp would force a brilliant reflex save from Berger with the keeper tipping the ball over the bar.

And the Blues stopper denied Stanway before Bronze missed a gilt-edged chance to score in stoppage time with the visitors securing a draw.

A home clash with Birmingham is up next for Man City.

But should they draw or lose to Carla Ward’s side then Chelsea could clinch the title if they win their derby duel with Tottenham.

And Taylor says his players intend to battle until the end of the season following the disappointment of their draw with Chelsea.

Taylor said: “I thought girls left everything out on the pitch and played some really good stuff in the second period and dominated proceedings.

“We looked like we were going to get the late winner. It took a world-class save from their keeper to keep them in it. 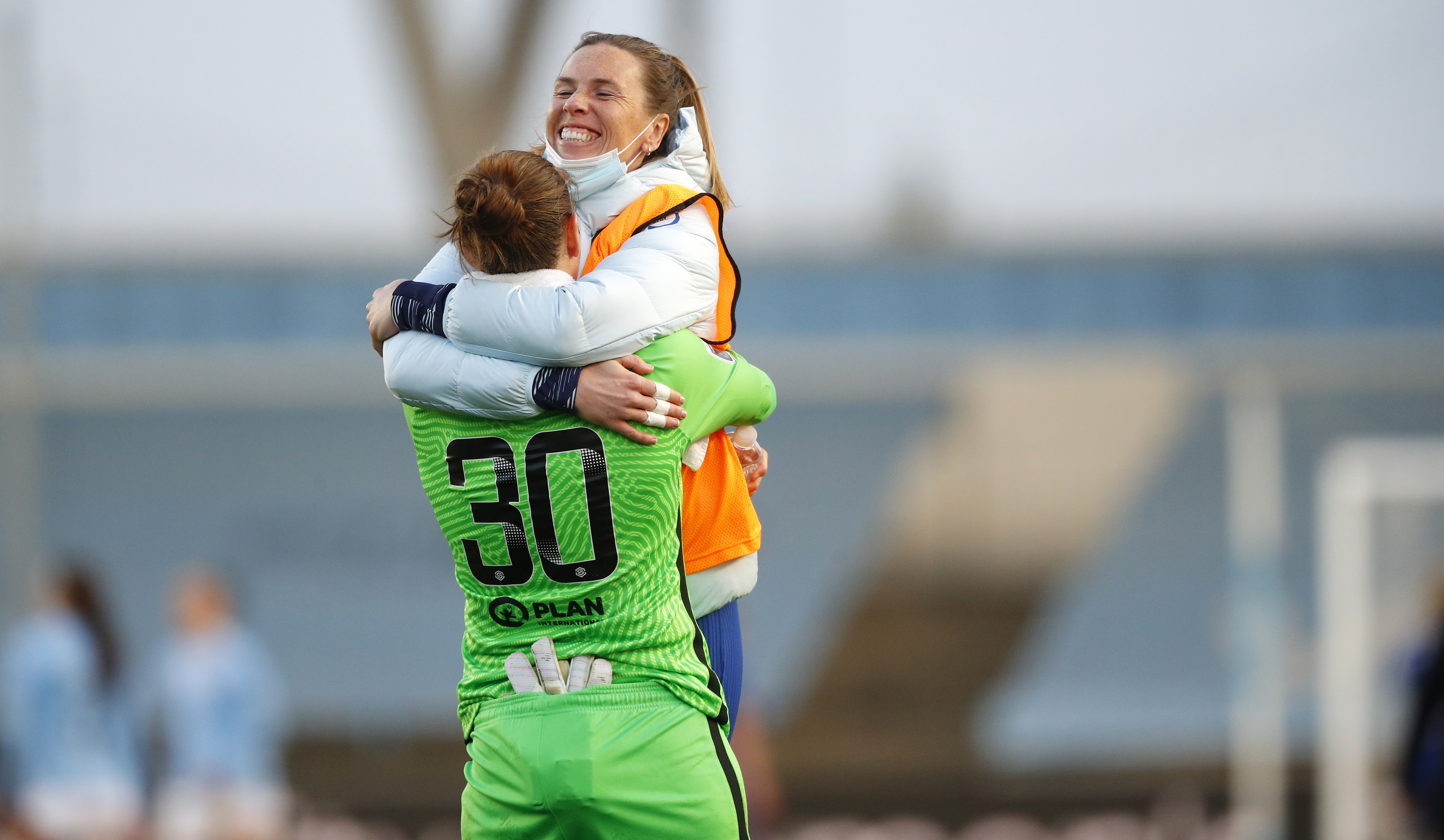 Chelsea will play Tottenham and Reading in their final two games of the seasonCredit: Colorsport

“We just run out of time in the end so you can understand that the disappointment for the girls,

“The most important thing is we make sure we focus on what we’re able to control which is the final two games.

“We need to take care of those games, finish the season strong, make sure we remain unbeaten at home and control we do.

“Anything else that happens elsewhere is out of our control, but we need to give ourselves the best possible chance.” 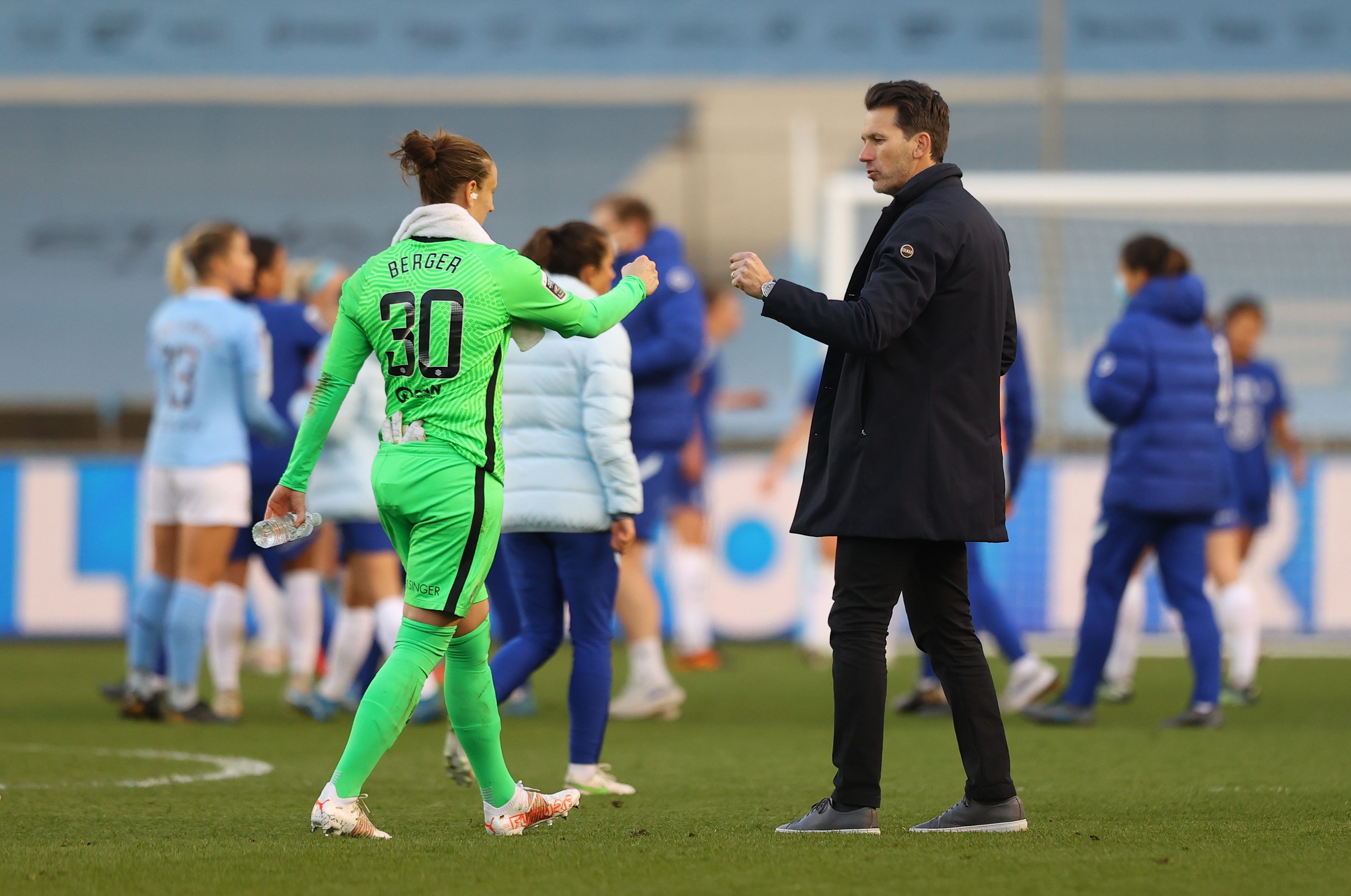 Man City are now two points behind Chelsea ahead of their game against BirminghamCredit: Getty