RYAN MASON has found a way to get Gareth Bale smiling – and winning again – at Spurs.

And while it may not be enough to entice the on-loan Real Madrid superstar to remain at Tottenham, it just might help them snatch a Euro spot this time. 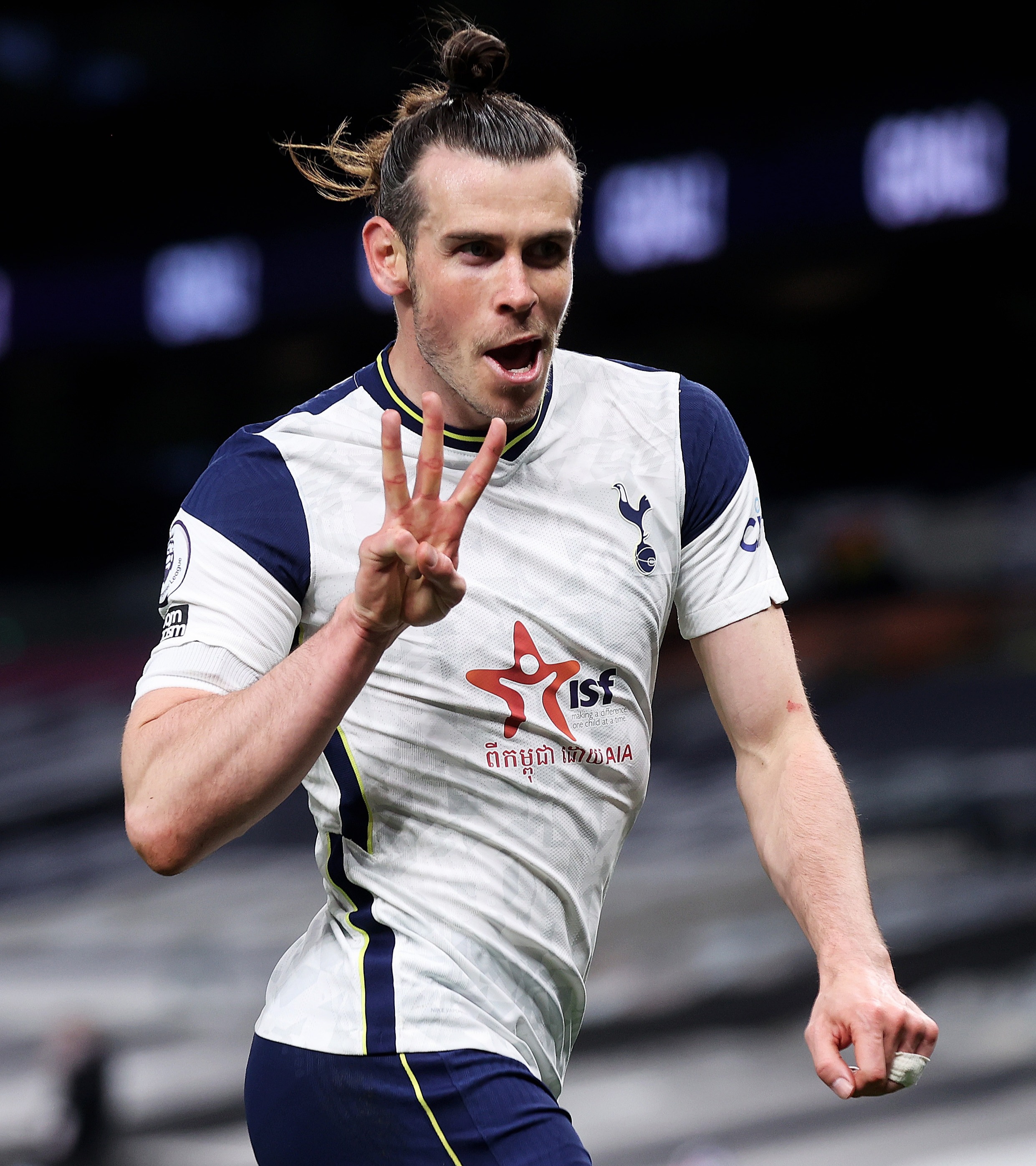 Dele Alli and Bale joke about the Welshman’s ‘golfer’ nickname in the celebrationCredit: EPA

The Wales wonder hit a hat-trick to fire the North Londoners back up to fifth in the Premier League table.

If they do go on to claim a Europa or, dare they dream, even a Champions League spot then Bale’s much-maligned return from the Bernabeu this term should surely be viewed as a success.

He certainly looks to be enjoying himself more under interim boss Mason than he did under Jose Mourinho, who was axed as Spurs manager a fortnight ago.

Bales followed up his goal in the 2-1 win over Southampton in their last League match with another three here.

He celebrated the clincher with a golf celebration with Dele Alli – in recognition of his love for the other sport.

This was his first treble for Tottenham since notching one in a 4-0 win at Aston Villa way back on Boxing Day 2012.

It took his goal tally for the club in all competitions this season to 14 – not a bad return by anybody’s standards, even a four-times Champions League winner.

In this battle of the caretakers it was Mason who found the key against his opposite number Paul Heckingbottom – by playing Tottenham’s Fab Four, with Bale, alongside Harry Kane, Son Heung-min and Dele Alli, who sported a new dreadlocked barnet.

After events at Old Trafford earlier in the day, fears of a copycat protest here were thankfully unfounded.

One wag joked the extra stewards were only on duty to ensure the regulars – subjected to a lot of dross this term – could not break out!

But there was no need as Tottenham, having been on the back foot for most of their 1-0 defeat to Manchester City in last Sunday’s Carabao Cup Final, obviously saw much more of the ball here.

But Eric Dier’s wayward pass to Pierre Emile-Hojbjerg let in David McGoldrick in the seventh minute only for the Blades striker to drag his shot wide.

Spurs continued to press forward with Son having a 20-yard drive tipped wide by Aaron Ramsdale. And when the United keeper was beaten by Kane’s effort moments later the ball was hacked clear by Chris Basham, even though replays showed it was probably going wide. 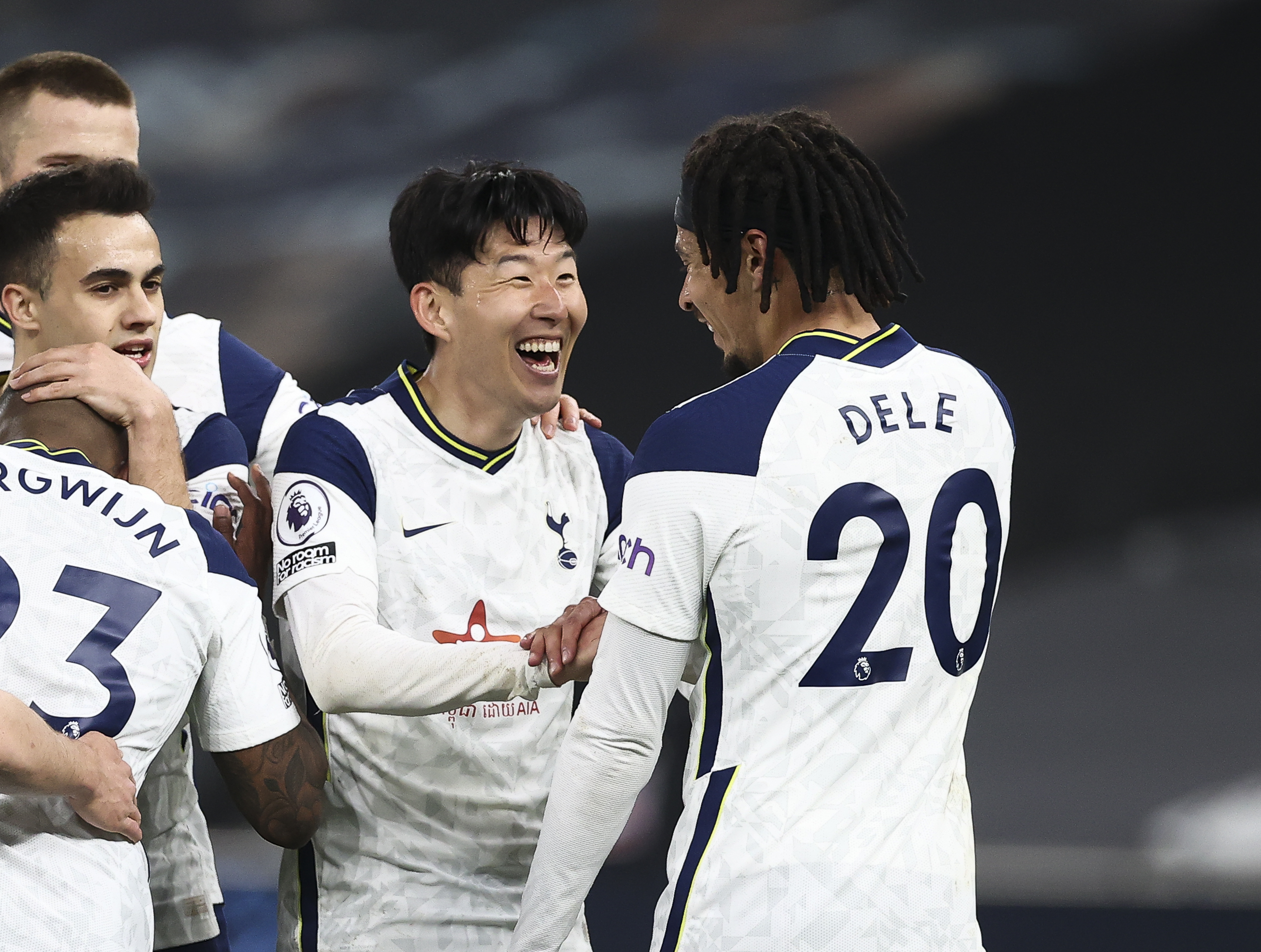 The South Korean looked like he could barely believe he had scoredCredit: News Group Newspapers Ltd

Kane looked sharper than he did at Wembley last week following his recent ankle injury – although there was no excuse scuffing his shot way over the bar after Sergio Reguilon’s pass had found him unmarked in the centre of the box. Unless, of course, he was practising for his NFL career.

This clash, like so many before it here this season, was threatening to lose its way until Serge Aurier collected a poor attempt to clear a Kane cross and dinked a pass over the visitors oncoming defence for Bale, beating the offside trap, to loft the ball over Ramsdale and into the net.

It is Ramsdale’s second successive top-flight relegation after he suffered the same fate with Bournemouth last season.

But unfortunately for him he is assured of a place in the Premier League record books as he has now failed to keep a clean sheet in any of his last 27 away starts – the longest run in the division’s history.

The England Under-21 star is one of the best young goalkeepers in the country and by rights there should be no shortage of takers for his services this summer.

But you wonder how many Prem clubs would be willing to buy a stopper with back-to-back relegations on his CV because while he may be talented, lucky he is not. 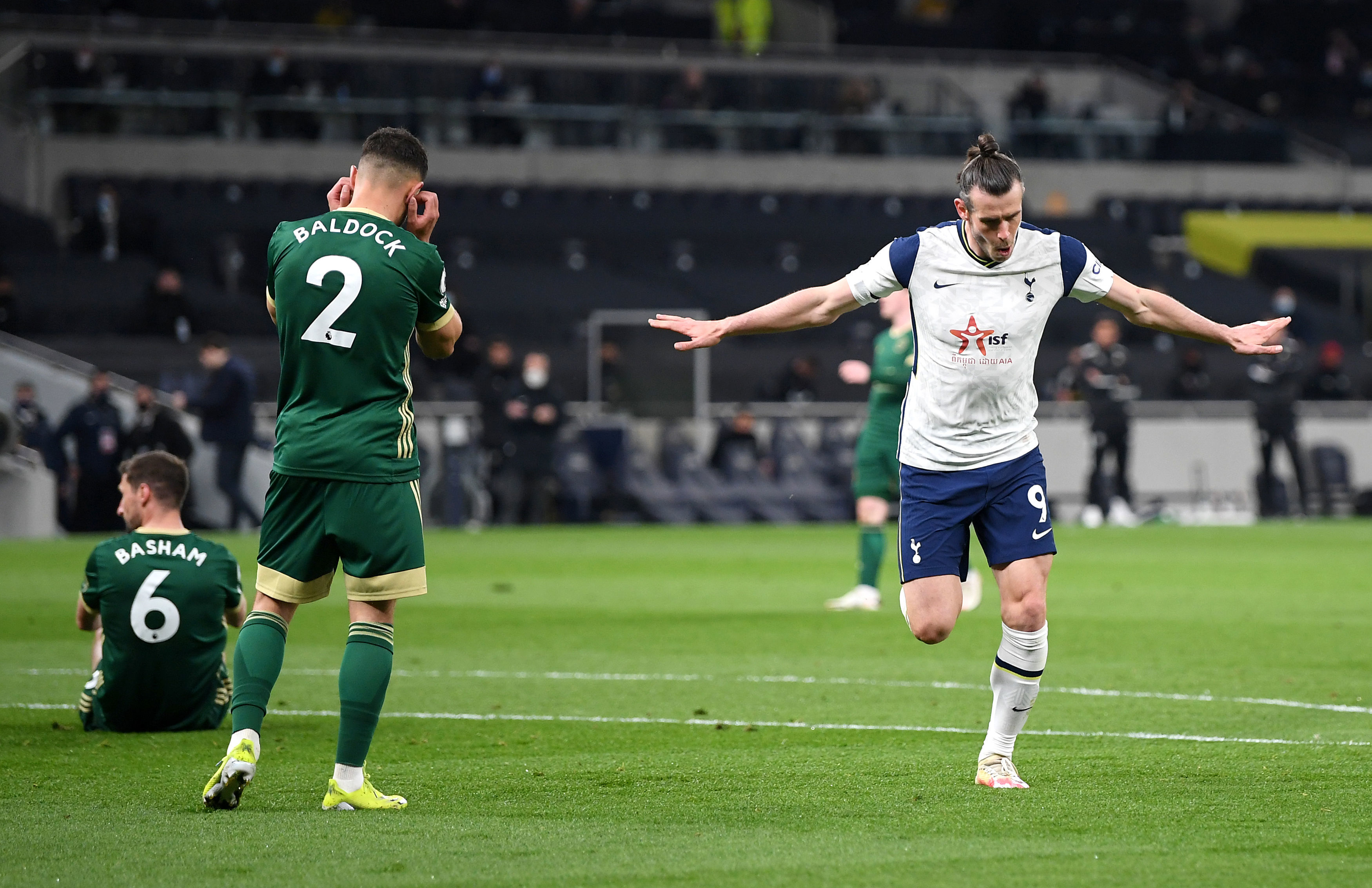 It was all about one man at Tottenham as Bale stole the showCredit: PA

At least old Jonah was in the right place to prevent Dele from doubling the lead with a shot on the stroke of half time.

VAR Peter Bankes was called into action twice at the start of the second half as he ruled John Fleck’s “stamp” on Giovani Lo Celso’s head was not violent conduct – before chalking off a 51st minute goal by Son for offside.

But Spurs were not to be denied as 10 minutes later Son played in Bale who ran through before nonchalantly smashing the ball into the top corner of the net to make it 2-0.

Oliver Norwood had a shot saved by Hugo Lloris in the Tottenham goal before Bale completed his hat-trick in the 69th minute with a low 20-yard drive into the bottom corner, having been teed up by Aurier again. 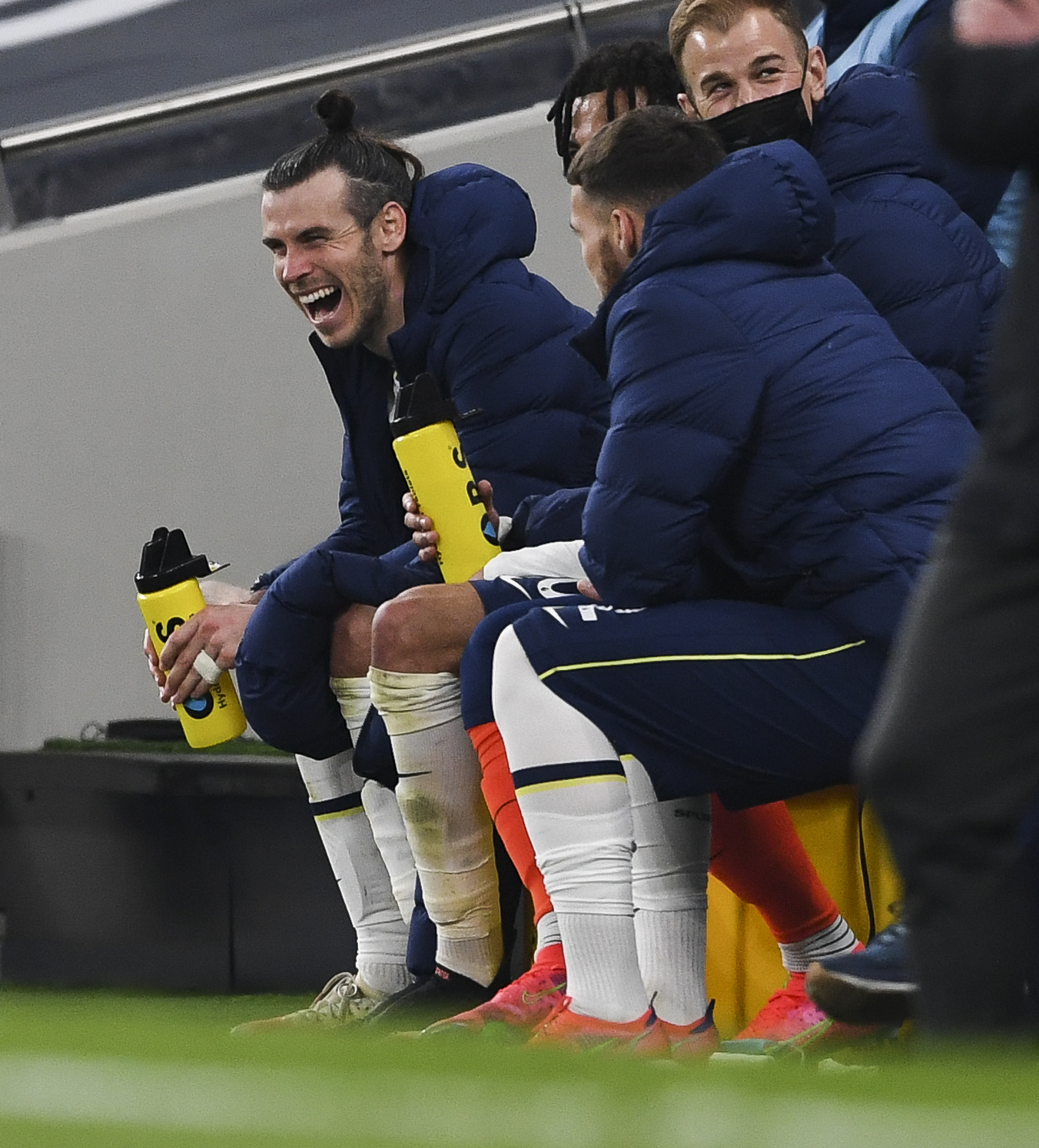 The Welshman enjoyed a little rest and a laugh on the benchCredit: Andy Hooper-The Daily Mail 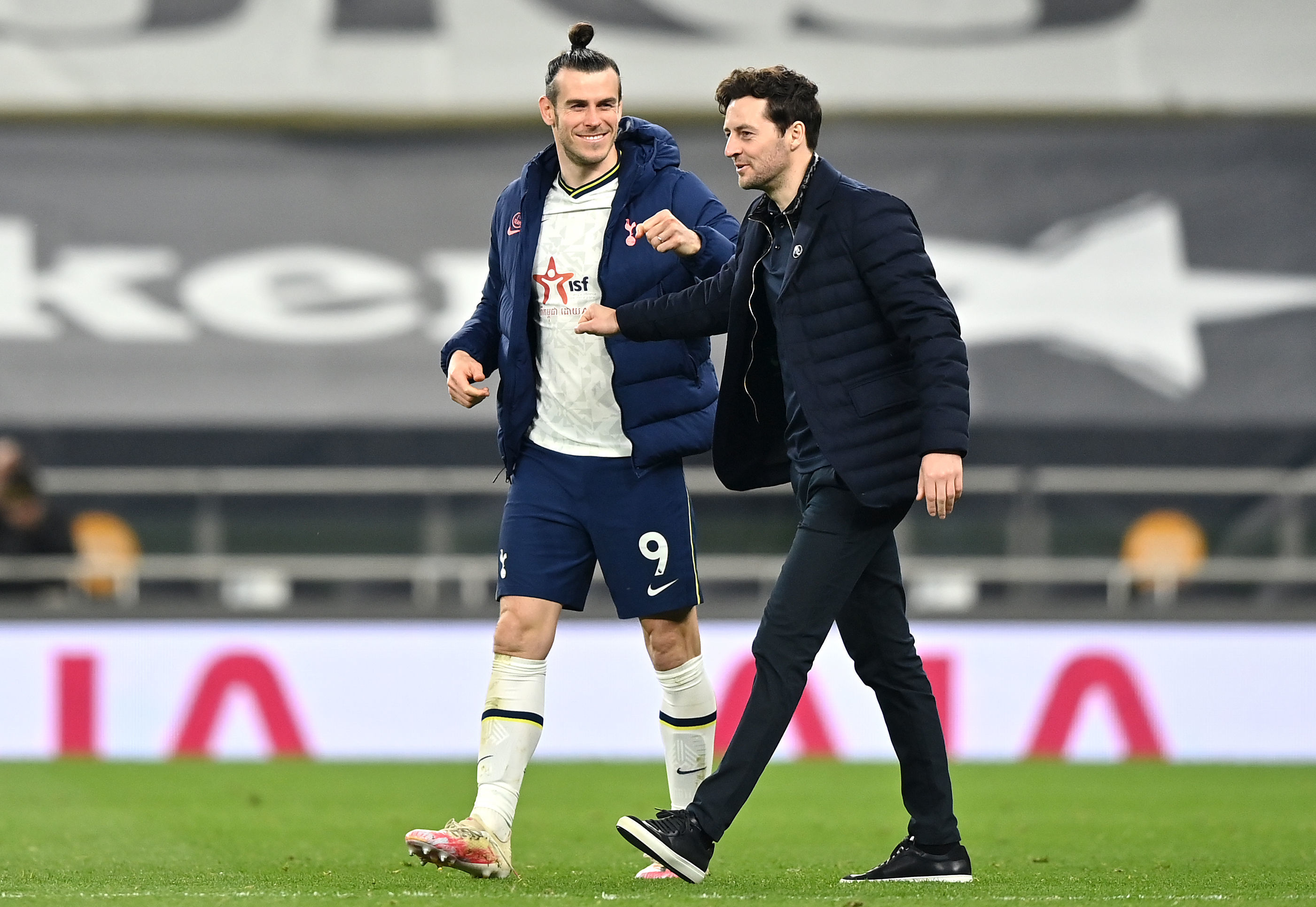 Ryan Mason got it spot on in starting Bale against Sheffield UnitedCredit: PA

It was the Wales captain’s 51st Premier League goal – and the hosts were not finished there.

Two minutes after replacing Bale as a 75th minute sub, Steven Bergwijn picked out Son, who unleashed a shot from the edge of the box which flew into the net off a post.

Tottenham could have made it 5-0 but just as the rest of the country were sitting down to watch Line of Duty, Kane headed a cross wide.

They have long known around here who the top dog known as H is.

But last night it was Bale who was murdering defenders.

As Ted Hastings would say: Mother of God, Jesus, Mary, Joseph and the wee donkey.

It was yet more disappointment for Sheffield UnitedCredit: Andy Hooper-The Daily Mail 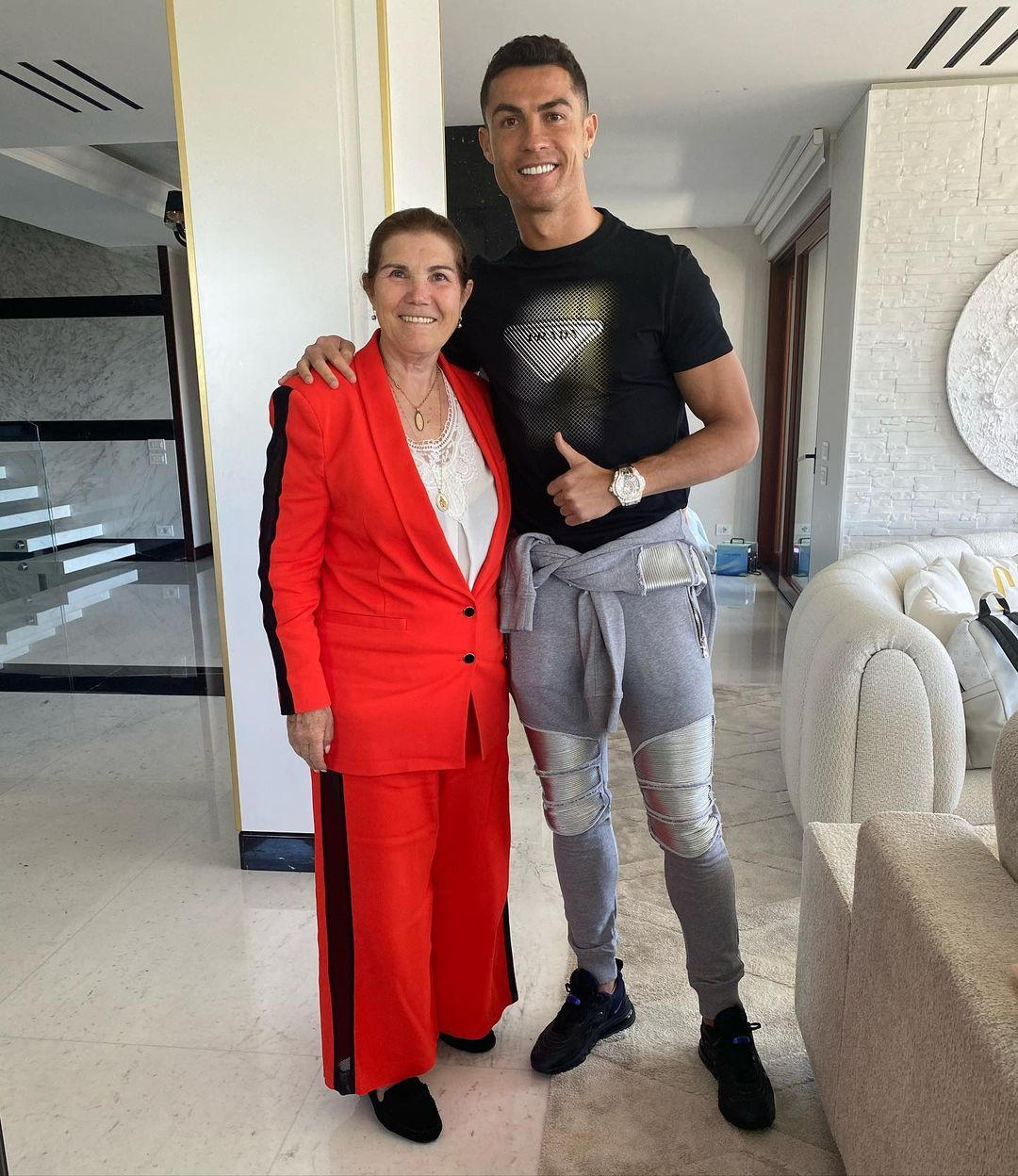