Hours later they sat in stunned silence as AZ had their team on toast.

Milos Kerkez of Alkmaar celebrates piling on the painCredit: EPA 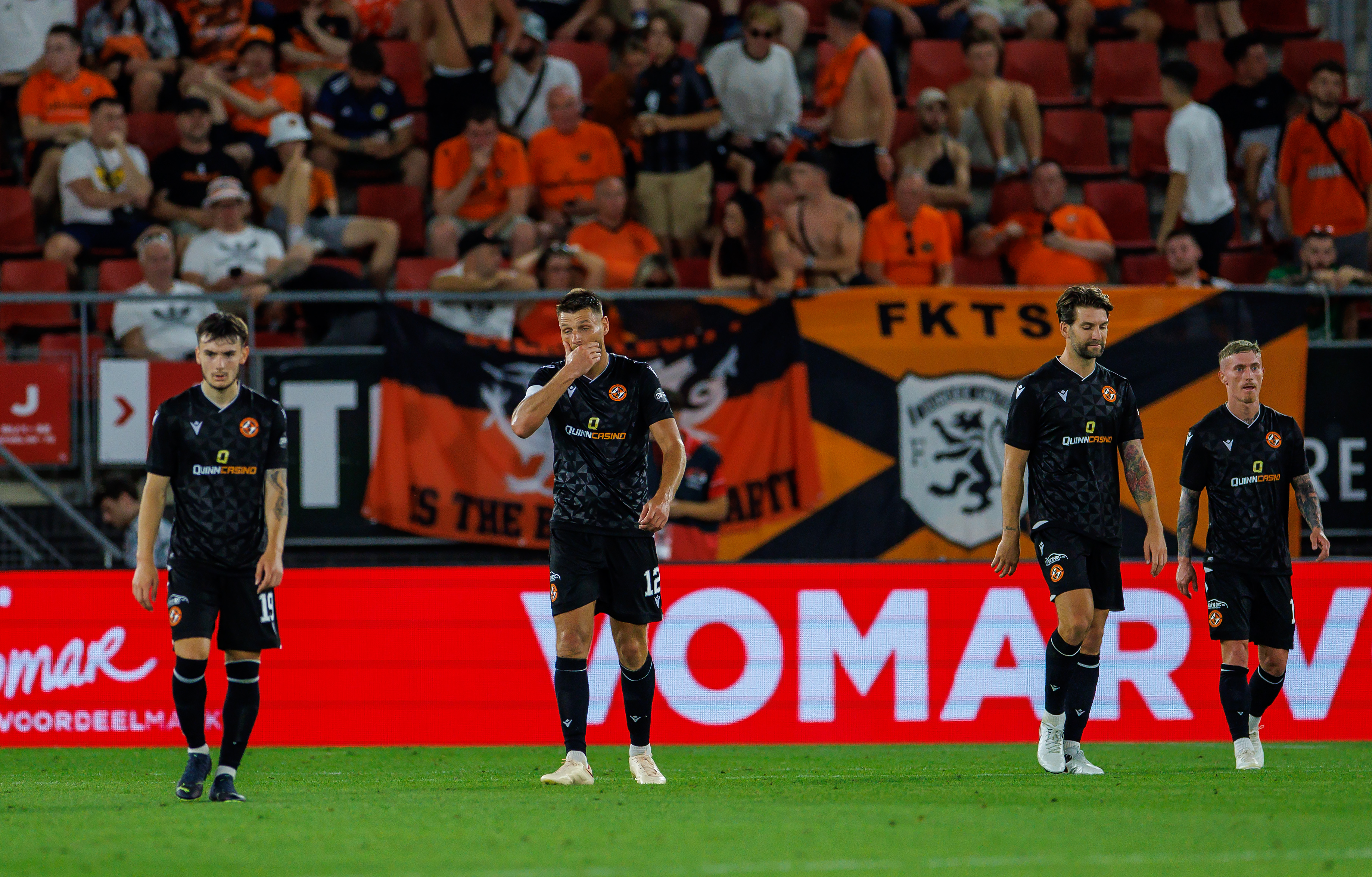 It was a rotten night for Dundee United in the NethlerlandsCredit: Kenny Ramsay

Alkmaar is the cheese capital of the Netherlands – and for United this was Edam disaster.

AZ’s seven goals earned the Tannadice men the humiliating distinction of equalling the Scottish record for a defeat in Europe, joining Celtic and Hibs following their batterings by Barcelona and Malmo.

Pascal Jansen’s side were always confident of turning around the 1-0 deficit from last week and showed exactly why with FIVE first-half goals to leave ragged United shellshocked.

At times manager Jack Ross must have wondered what he was standing watching as the goals rained in during a brutal 23 minutes of hell for the SPFL side.

Mark Birighitti – Stunning block to deny Evjen early in the game but won’t want to watch back his role in the third or much else. A horrible evening picking the ball out so often. 2

Liam Smith – Tough shift coping with the overloads AZ forced on him all night and was eliminated with a one-two for the opening goal. Couldn’t cope with being swamped by the AZ onslaught. 2

Ryan Edwards – Badly exposed stepping up a level and was left chasing shadows at times as AZ put their foot on the gas to run over the top of his team. Will have nightmares about this night. 2

Charlie Mulgrew – Made two early blocks to save his side but was gradually taken apart by rampant AZ as they brutally tore United to pieces. Struggled with Pavlidis all evening. 2

Aziz Behich – Thrown in for a quickfire debut just hours after receiving his work permit clearance and won’t forget it in a hurry – for all the worst reasons. Hooked after 55 minutes. 2

Craig Sibbald – Had one of the toughest shifts of the night keeping up with AZ’s midfield as they flooded forward at every opportunity. Hooked at the break for Niskanen as Ross tried to salvage pride. 2

Ian Harkes – So unlucky to see Verhulst make a stunning save to deny him with a bicycle kick which could have levelled the scoreline in the first half. Couldn’t get a grip of the game once the goals rained in. 3

Jamie McGrath – Replaced Middleton after coming off the bench last week but struggled to cope with the movement of the AZ midfield. Is miles better than he was able to show here. 2

Dylan Levitt – Showed some nice touches as always when in possession of the ball but couldn’t produce enough magic to stop AZ running over the top of them once the goals started to flow. 3

Steven Fletcher – Had a couple of openings in the first half but his job became an impossible one as AZ racked up the goals. Hopeless task from half an hour onwards. 3

Tony Watt – Flitted in and out of the game in the first half as AZ steamrollered United before being replaced by Middleton at the break. A night he will be eager to forget. 2

Glenn Middleton (Watt 46) –  Thrown on at half-time to see if he could get United up the pitch but they lost a sixth within a minute. 3

Ilmari Niskanen (Niskanen 46) – Half-time sub with the score 5-0 is a thankless task and couldn’t provide a spark. 2

Scott McMann (Behich 54) – Replaced Behich with his team six goals down and struggling to cope with AZ’s movement. 2

Mathew Cudjoe (Fletcher 66) – Livewire striker thrown on to get experience of playing at this level. 3

Archie Meekison (Levitt 75) – Another kid thrown on to get a taste of the European stage. 2

Striker Vangelis Pavlidis, who bemoaned his rotten luck against Scottish clubs on Wednesday, grabbed a double and so did midfielder Tijjani Reijnders before Hakon Evjen twisted the knife with seconds to go.

Within 45 minutes this equalled United’s worst-ever result in Europe, ironically their last game at this level – a 5-0 hammering by Dynamo Moscow ten years ago.

But it got worse than. Much worse.

The 1,400-strong United support could do nothing but sit and take the taunts from the home support although plenty, sensibly, opted to cut and run early in order to get back to the bright lights of Amsterdam forty minutes away.

A trip that had kicked off with such promise following last week’s high-octane win at Tannadice had turned into calamity.

AZ started in much the same vein as seven days earlier, stroking the ball around confidently and trying to move the Tangerines back line out of place.

With the first leg lead, United had been in no hurry to do anything and taking an age to sort the free kick angered the home support, who jeered every time they slowed the game down.

United keeper Mark Birghitti was called into action for the first time on twenty minutes and what a stop he produced to keep the scores level.

AZ worked the ball from the right into the area for Hakon Evjen to shoot and even though it came through a screen of players, the Aussie stopper was down quickly to his left to turn it away.

But that was the high point and he was helpless to stop the first goal just two minutes later as AZ slickly sliced the Tangerines wide open.

Galloping left back Milos Kerkez, who had been dangerous all evening, pinged a one-two between himself and Rejinders, completely eliminating right-back Liam Smith and getting United’s defence on the rack.

With Charlie Mulgrew and Ryan Edwards backtracking, Kerkez slipped a fantastic low cross into the six-yard box for Pavlidis – and his scoring jinx against Scottish clubs came to a sudden end.

United came agonisingly close to the leveller just four minutes later but were denied by a simply incredible stop by Verhulst.

Smith fired a superb cross into the area for Fletcher, who was narrowly beaten to it by Reijnders before it spun to the back post towards Harkes.

The American did brilliantly to get a bicycle kick on target and it looked every inch a goal until the AZ keeper somehow got a touch to send it over.

And they were left to rue that moment as on the half-hour AZ went ahead in the tie for the first time – and the wheels came hurtling off their European adventure.

It was agonising for Levitt, who tried to stretch out and block a cross-field pass but didn’t get enough of a contact on it to steer it to one of his players, only sending it into the path of Reijnders.

With a sight of goal and United’s defence parted, the midfielder picked his spot across Birighitti and slammed the second beyond him.

The game threatened to get away from United now, with first Dani de Wit having a sight of goal and then Pavlidis almost capitalised on a Birighitti slip.

Things got messier on 35 minutes as AZ swaggered into an even more commanding lead, this time leaving United’s keeper looking daft.

He came off his line to gather a Evjen corner kick but missed it completely, leaving Pavlidis free to nod into an empty net from six yards.

The evening got even worse four minutes before the break as United simply couldn’t clear their lines, leaving Reijnders in acres of space to slam home from eight yards.

United’s fans, in fine voice before kick-off, sat in stunned silence watching their team be utterly demolished in such ruthless fashion.

And the humiliating fifth came right on half-time, a thunderbolt from outside the box from Evjen which gave Birghitti no chance as he watched it fly past.

Ross made two changes at the break, replacing Watt and Sibbald with Glenn Middleton and Ilmari Niskanen, but it made absolutely no difference whatsoever as the collapse continued within a minute of the restart.

This time Pantelis Hatzidiakos sent a ball in for Pavlidis, only for his shot to come off Mulgrew and roll for De Wit, who slammed home for six.

Seven came on 74 minutes with Lahdo providing the finish after being played in by Pavlidis.

Only the width of the post stopped it being eight – and a new record – with the final kick of the ball as Lahdo tried for another.

In the city of cheese, what a roasting this was.