The Manchester City striker has been heavily linked with a switch to the Emirates, with SunSport understanding the Gunners are in pole position to sign him.

Manchester City striker Gabriel Jesus could be on the move to Arsenal this summerCredit: PA

Arsenal are believed to be preparing an opening offer for the 25-year-old as Arteta looks to be reunited with the Brazilian in North London.

With one year left on his deal at the Etihad, Jesus, who helped City win the Premier League title on Sunday, is keen to leave with the club willing to sell him.

The ex-Palmeiras ace believes he will struggle for minutes next season following the arrival of Erling Haaland from Borussia Dortmund.

It has been said that Jesus has all-but agreed personal terms over a switch to link up with Arsenal. 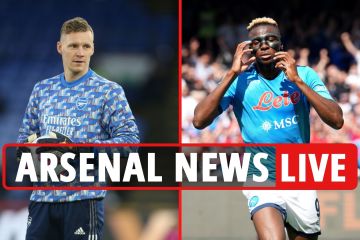 But there were fears that Arsenal, who will be playing Europa League football next term despite beating Everton 5-1, wouldn’t be able to secure his services after missing out on a Champions League spot.

However the potential transfer is still on according to Globo Esporte, with Jesus prepared to not play in Europe’s premier competition.

They add that his representatives will now meet with City to present offers for the forward with City hoping to fetch a fee between £42million-£52m.

Meanwhile transfer guru Fabrizio Romano has declared that Arsenal have made signing Jesus their top priority.

He tweeted: “Arsenal want Gabriel Jesus as priority and nothing has changed, even after missing on Champions League spot race. More to follow in the coming days.”

Jesus discussed his future after helping City beat Aston Villa 3-2, where he stated he has already spoken to the club about his situation.

He told ESPN Brazil: “About my future, it’s still uncertain. I have a contract with City and I have already expressed my desire to the City people and to my agent. I have in my head very clear what I want.

“Today, I want to celebrate a lot with City. It’s obvious that I’m very happy here.

“Tomorrow, if everything goes well for me, my wife and our family, Helena [his daughter] will come to the world

“So, I have to take advantage of this moment. Then, think about the team, smile at the team again. And, on vacation, I decide about my future.”