ARSENAL are set to submit another bid for Ajax centre-back Lisandro Martinez, according to reports.

The Gunners have been heavily linked with a swoop for the defender, 24, over the past few weeks.

They have already had a £25million bid rejected by the Eredivisie champions, but they are now set to submit an improved offer of £34.5m.

However, according to Dutch Outlet De Telegraaf, it is unlikely to be accepted as Ajax want at least £43m for his services.

The Red Devils are looking to bolster their defence following a disastrous season. 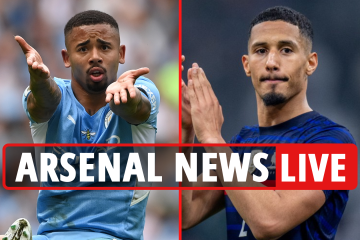 But they are currently struggling to bring in any new players.

Brazilian attacker Marquinhos was their first signing of the window after arriving from Sao Paulo in a £3m transfer.

Portuguese midfielder Fabio Vieira followed just a few days later – he joined the Gunners in a £35m move from Porto.

And Matt Turner was the most recent addition having made a move from MLS side New England Revolution.

But Arteta and his staff are not slowing down in their transfer business anytime soon as the club are also set to announce the signing of Gabriel Jesus on a £45m transfer from Premier League champions Manchester City.

The Brazilian is expected to undergo a medical in London on Tuesday ahead of an official announcement.

Arsenal are also looking to sign Raphinha from Leeds.

Representatives from both clubs will reportedly meet this week to discuss the possibility of a deal.