BENFICA are reportedly willing to offer Bernd Leno an escape from his Arsenal nightmare in a potential £8.5million deal.

The German goalkeeper has been limited to just four Premier League appearances this season with Aaron Ramsdale ousting him as the No1 choice.

Bernd Leno looks set to depart Arsenal this summer having lost his place in the teamCredit: Getty

It took just three games of the campaign for Leno to lose his starting spot under Mikel Arteta.

Following the 5-0 defeat away at Manchester City on August 28, Leno had to wait until March 19 for his next top-flight outing.

Leno kept a clean sheet in the absence of then-injured Ramsdale as he helped the Gunners beat Aston Villa 1-0 in the Midlands.

That looks set to be his last appearance for the North London outfit with the England international expected to feature in the final match against Everton on Sunday. 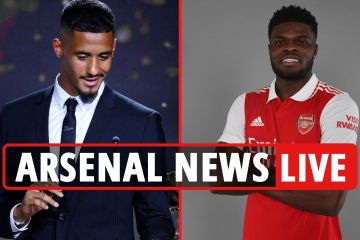 Leno may not even be Arsenal’s No2 next term with the club already agreeing a deal to sign American ace Matt Turner from MLS side New England Revolution.

According to Correio da Manha, Benfica have emerged as a potential destination for the nine-cap international.

They state that new boss Roger Schmidt has made signing the player a top priority as he eyes up a reunion with him at the Estadio da Luz.

Schmidt and Leno worked with each other for three years at Bayer Leverkusen before his £22m transfer to Arsenal in 2018.

With Leno’s contract to expire in 2023, Arsenal know they have to cash in this summer to avoid losing him for nothing next year.

The Portuguese news outlet has claimed that the Gunners are willing to part ways with Leno should they receive a fee in the region of £8.5m.

It remains to be seen whether Benfica will match Arsenal’s asking price and if the goalkeeper would be open to taking a pay cut on his £100,000-a-week salary.

Newcastle have also been linked with a move for Leno, but it has been said that he will snub a switch to St James’ Park.

A return to the Bundesliga has also been mooted, with former club Leverkusen believed to be keeping tabs on his situation.

Leno confirmed last month that he is prepared to depart Arsenal should he remain a peripheral figure.