FOOTBALLERS will do anything to get an edge over their opponents.

And that means more work in the gym, sculpting their perfect bodies and lifting heavy weights to gain extra muscle.

Cristiano Ronaldo is sculpted like an AdonisCredit: AFP or licensors

But these stars didn’t always look like body builders.

In fact, these athletes have enjoyed a remarkable body transformation over the years, even when they could not train normally last year during the coronavirus lockdown.

When former Chelsea star Hazard moved to Real Madrid in a deal worth £130million, Los Blancos were delighted.

But they wouldn’t have been happy when he turned up to training seven kilograms overweight.

Even fans pointed out he looked chunky when he reported for preseason games.

However, during the coronavirus lockdown Hazard took his fitness very seriously.

“It’s complicated for me. I’m trying not to eat a lot,” he told RTBF.

“I’m trying not to go into the pantry to eat a lot of buns, but it’s not easy.”

Unfortunately for the Belgian he has still suffered to hit top form since for Madrid and has been linked with a move to Juventus. 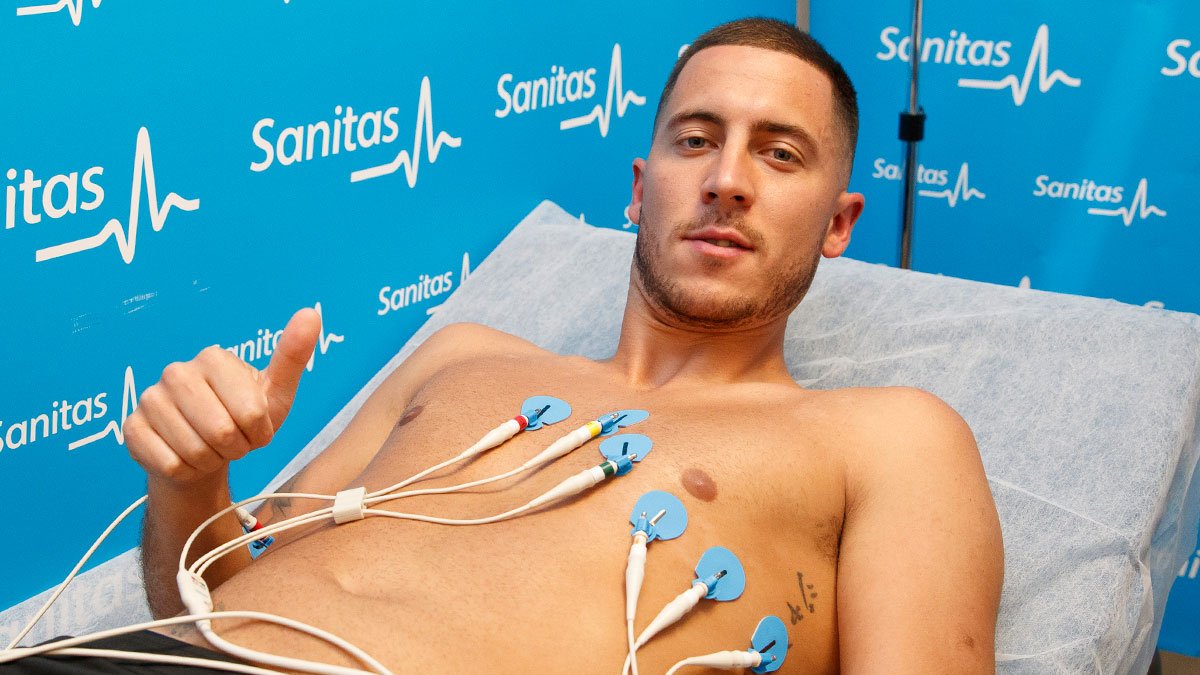 As a youngster, the five-time Ballon d’Or winner was often called too skinny by his coaches.

But through the years, Ronaldo went from lanky winger to powerhouse forward thanks to a strict exercise regime.

“I put it in my mind that my body can improve,” Ronaldo said.

“With dedication and hard work in the gym I improved a lot on that – at the end of the day it’s down to the person’s mindset.”

A Pilates-based routine that focuses on resistance work to strengthen his core is also key to his success – reportedly giving the Portuguese star the body of a 23-year-old.

Now Manchester United will be hoping to reap the rewards after they forked out to bring him back to Old Trafford from Juventus at the age of 36. 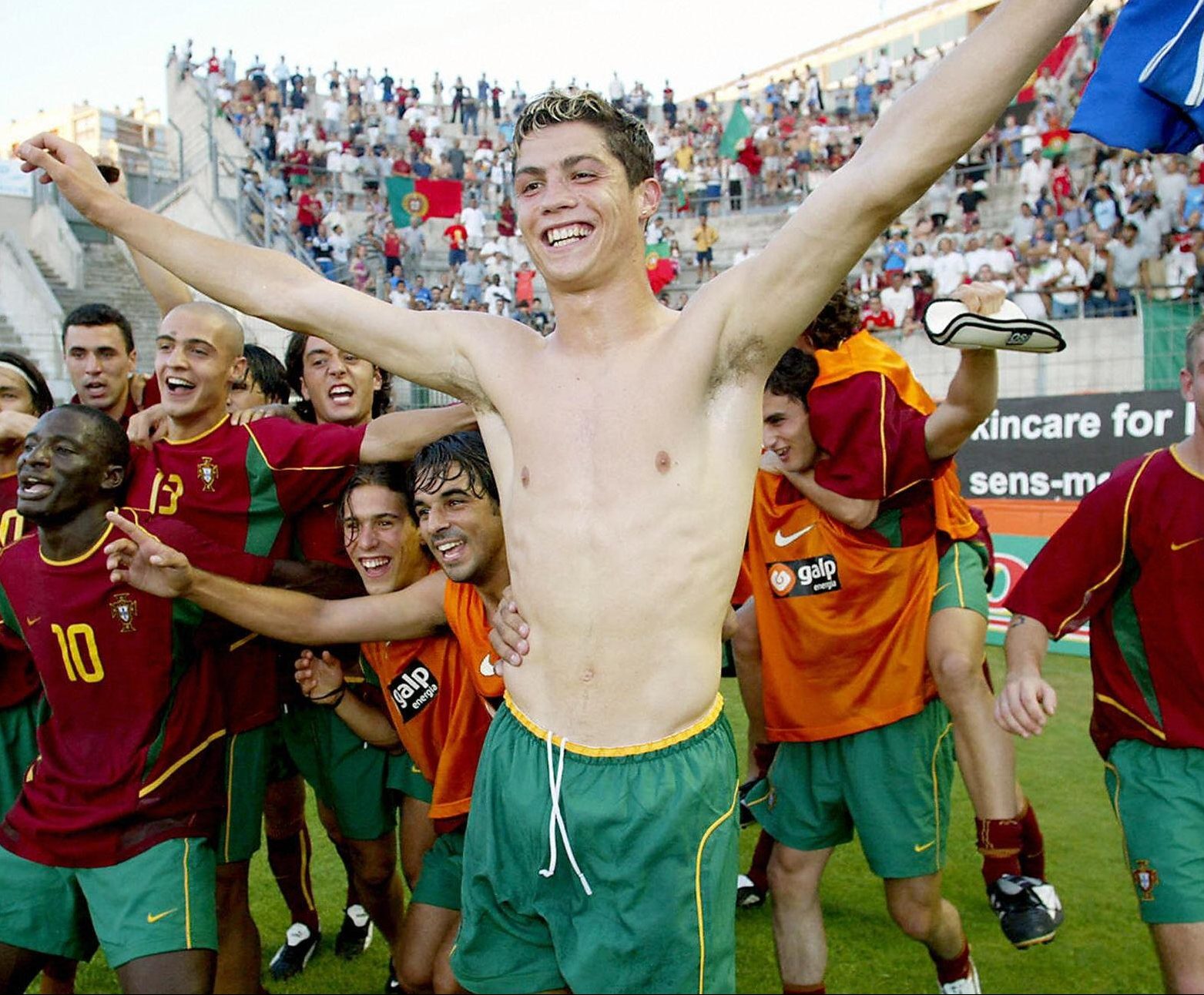 Ronaldo used to be called too skinny when he was an up and coming youngsterCredit: AFP 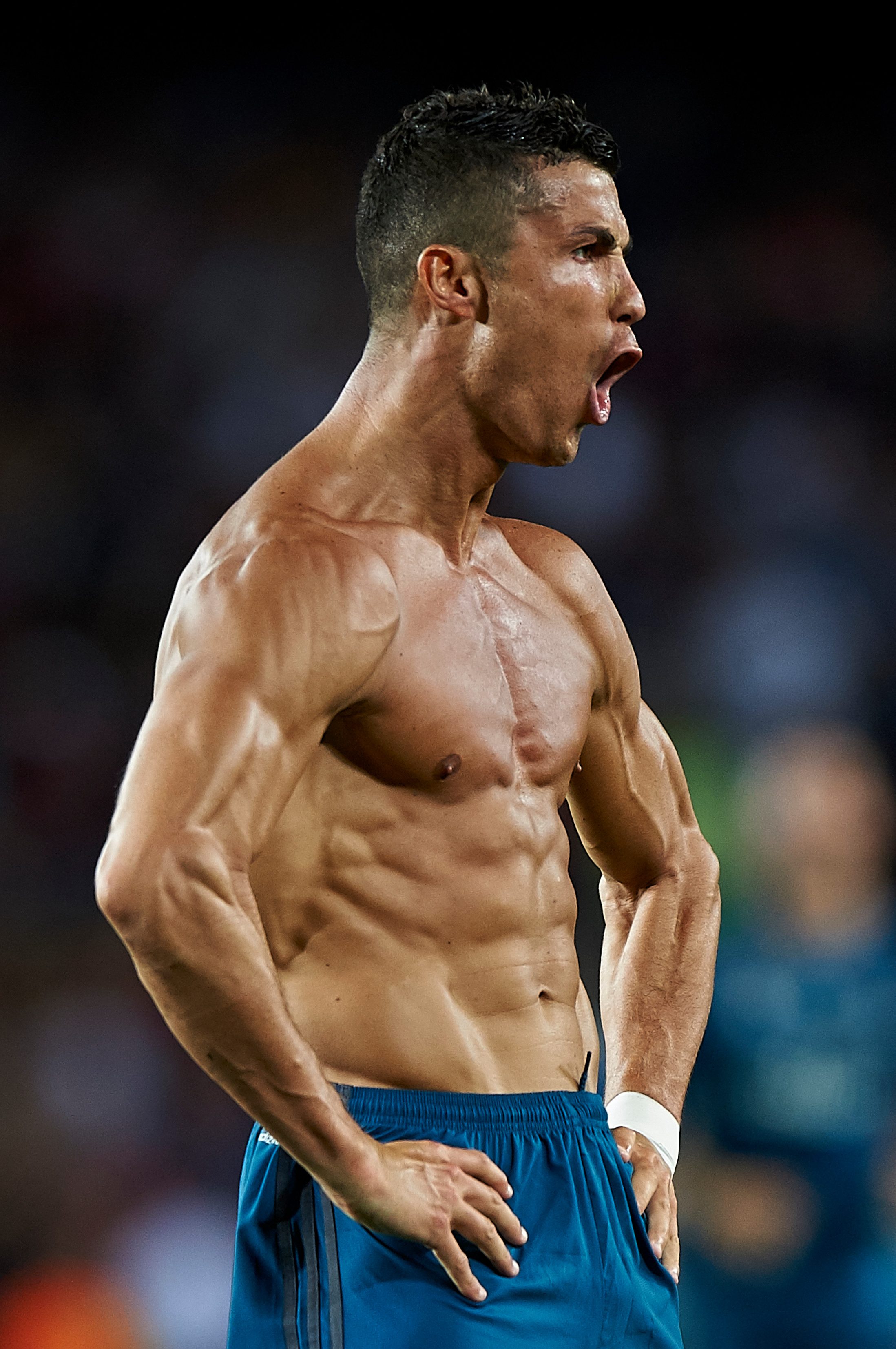 Thanks to a strict diet and rigorous exercise regime Ronaldo has transformed his bodyCredit: Getty – Contributor

When Rashford emerged on the scene in 2017 as a fresh-faced 19-year-old, his body was still developing.

But having Ronaldo as a role model at the club when he was a youngster was a big help.

The striker watched his now teammate in training closely, adding strength and conditioning work to the technical training he does at Carrington, which has given him a more muscular physique today. 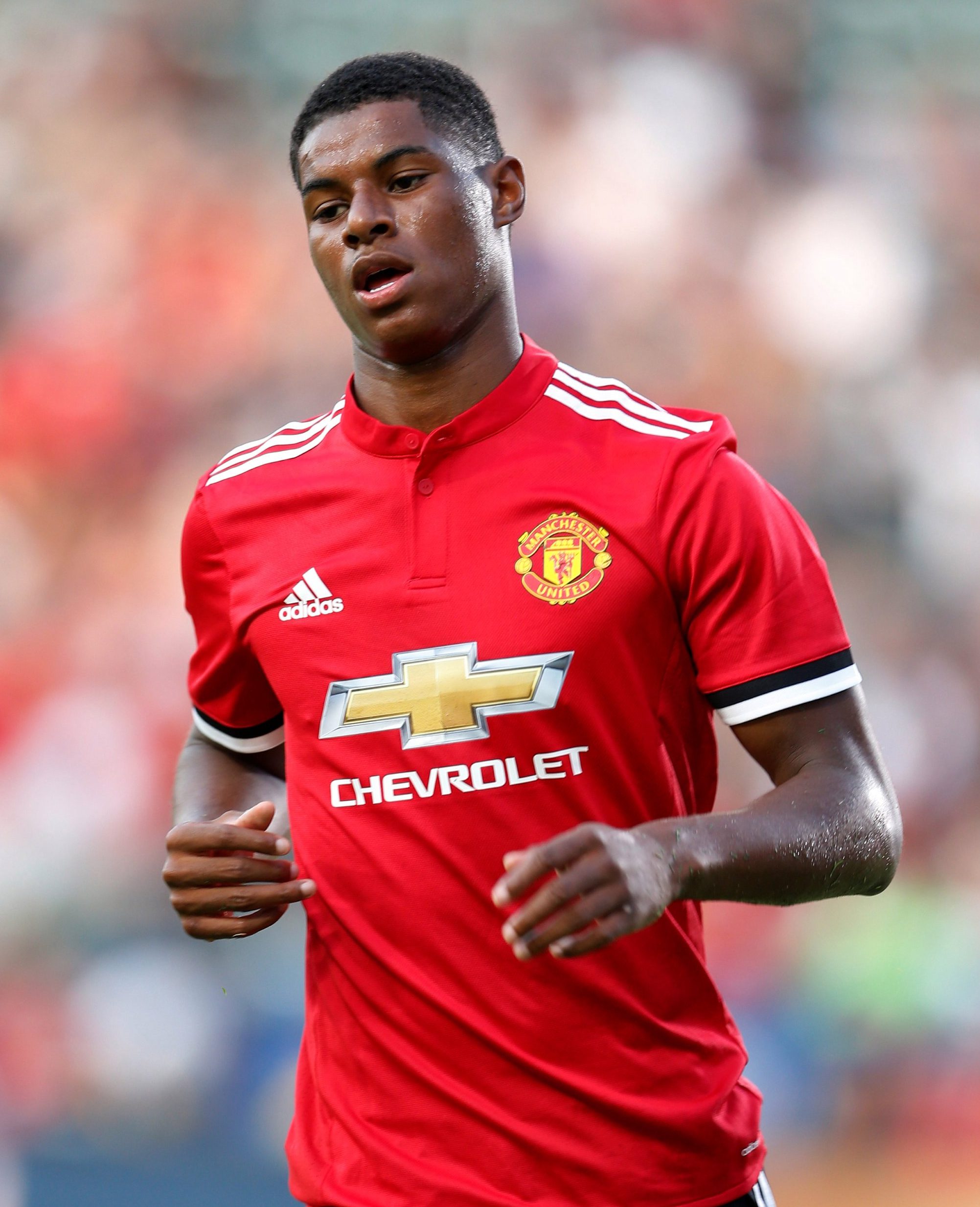 When Marcus Rashford first emerged on the scene in 2017 he was skin and boneCredit: Reuters 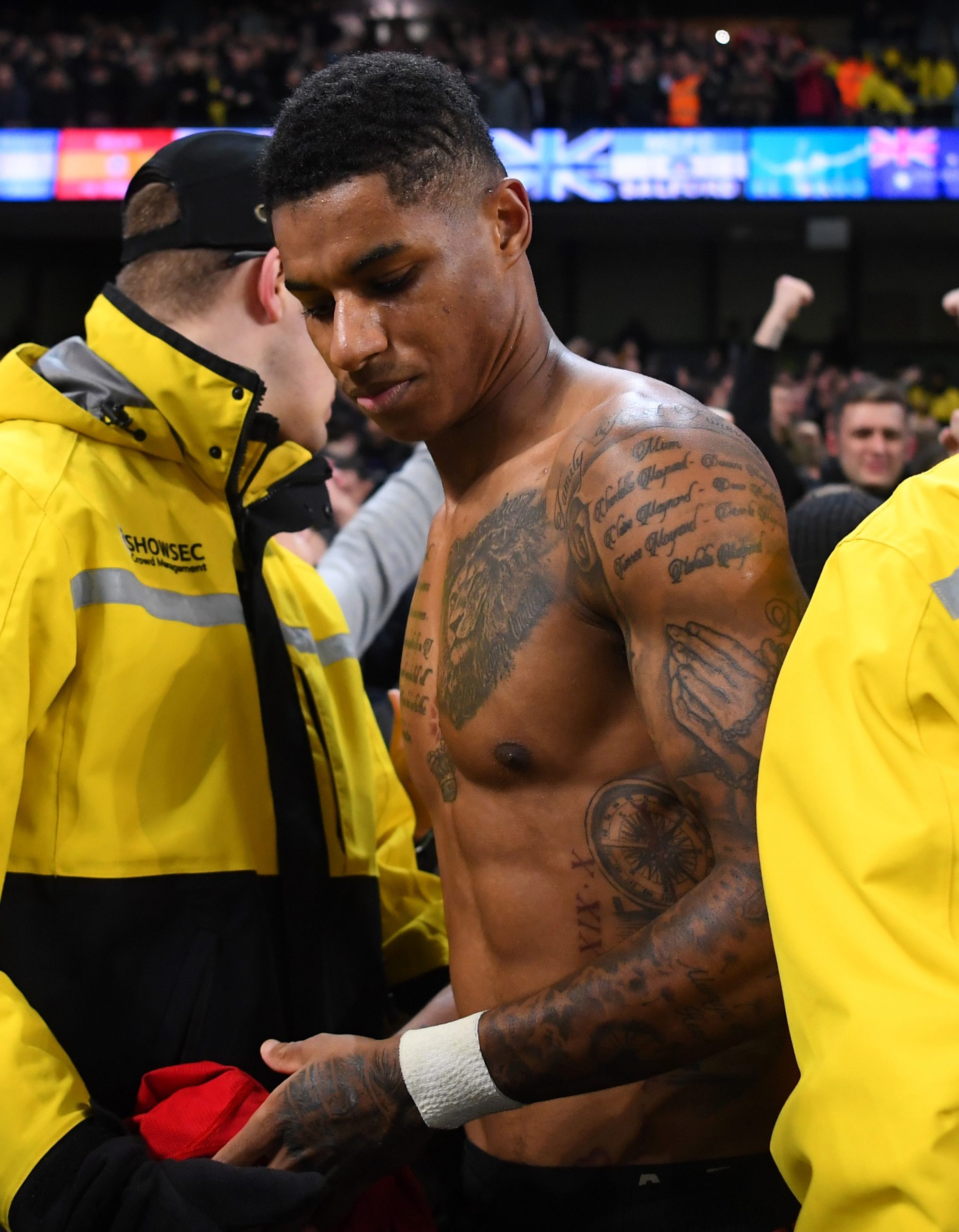 The Bayern Munich striker has been sensational for the Bavarian giants, and it’s all down to his nutritionist wife Anna.

Through his diet, as well as rigorous training regime with the Bundesliga side, he is now the perfect specimen.

“We changed our diet step by step, first cutting out sweets and then milk,” Lewandowski explained.

“Cows’ milk and soya milk isn’t good for me. Almond milk and rice milk is OK. I don’t really drink alcohol, either. Maybe wine but only sometimes.” 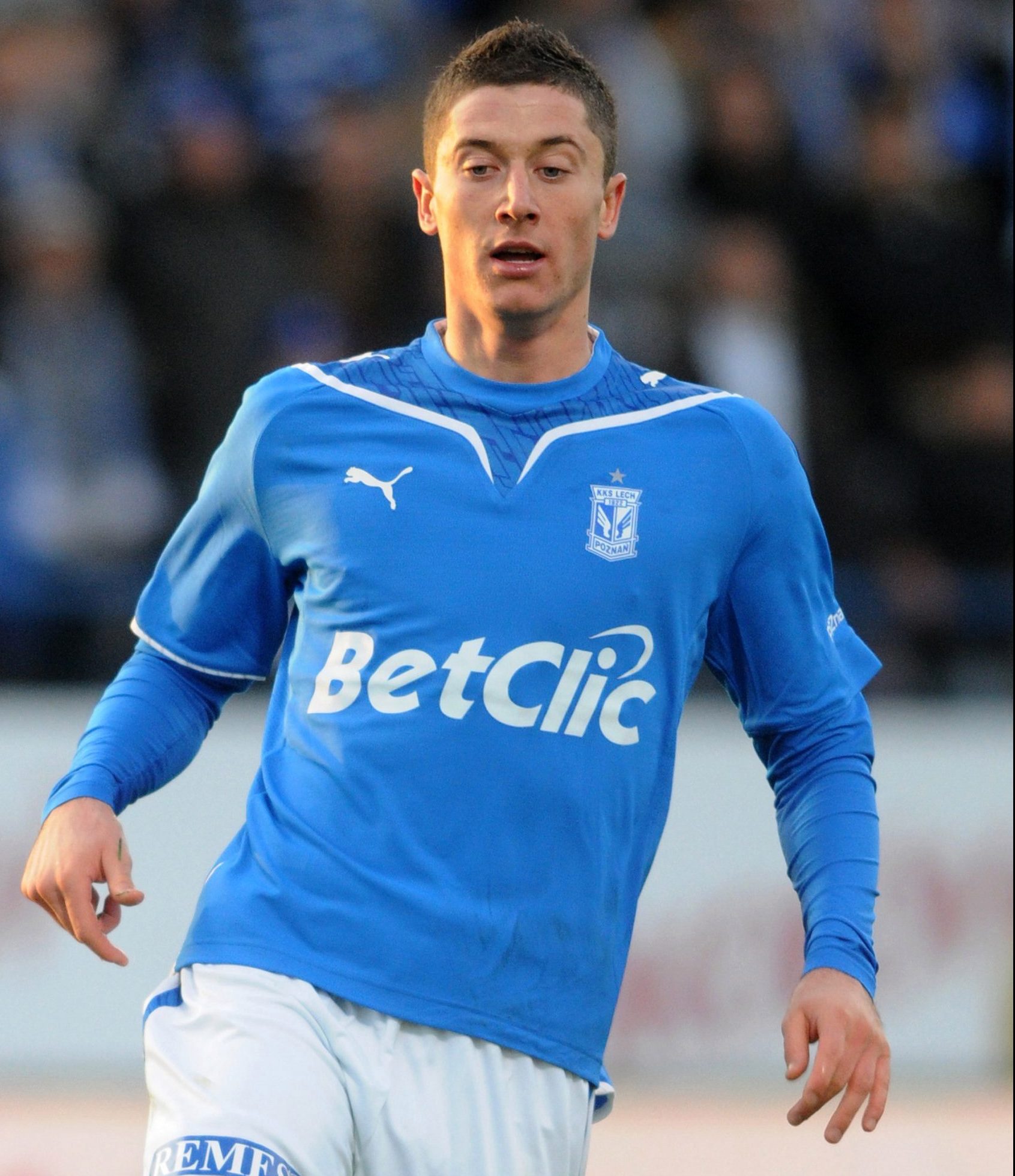 When he started his career at Lech Poznan Lewandowski was skinnyCredit: Getty Images – Getty 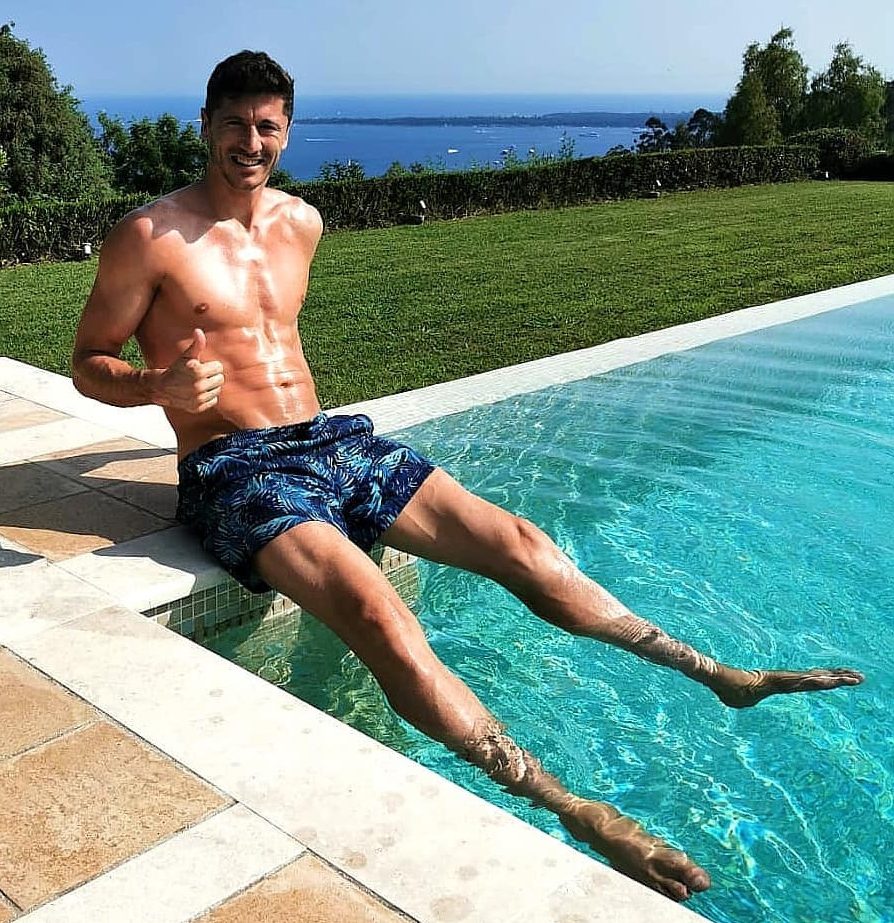 A devastating blend of pace and power, Traore’s game has come on leaps and bounds.

And social media blew up when snaps of the Spain winger emerged showing off a raging bicep that would’ve put any Hollywood action hero to shame.

But despite his rippling muscles, Traore insists he doesn’t do any weight training.

“My training? I don’t do weights,” he told La Sexta.

“It’s hard to believe, but I don’t do weights.

“It’s genetic. I exercise, but I gain mass very quickly.” 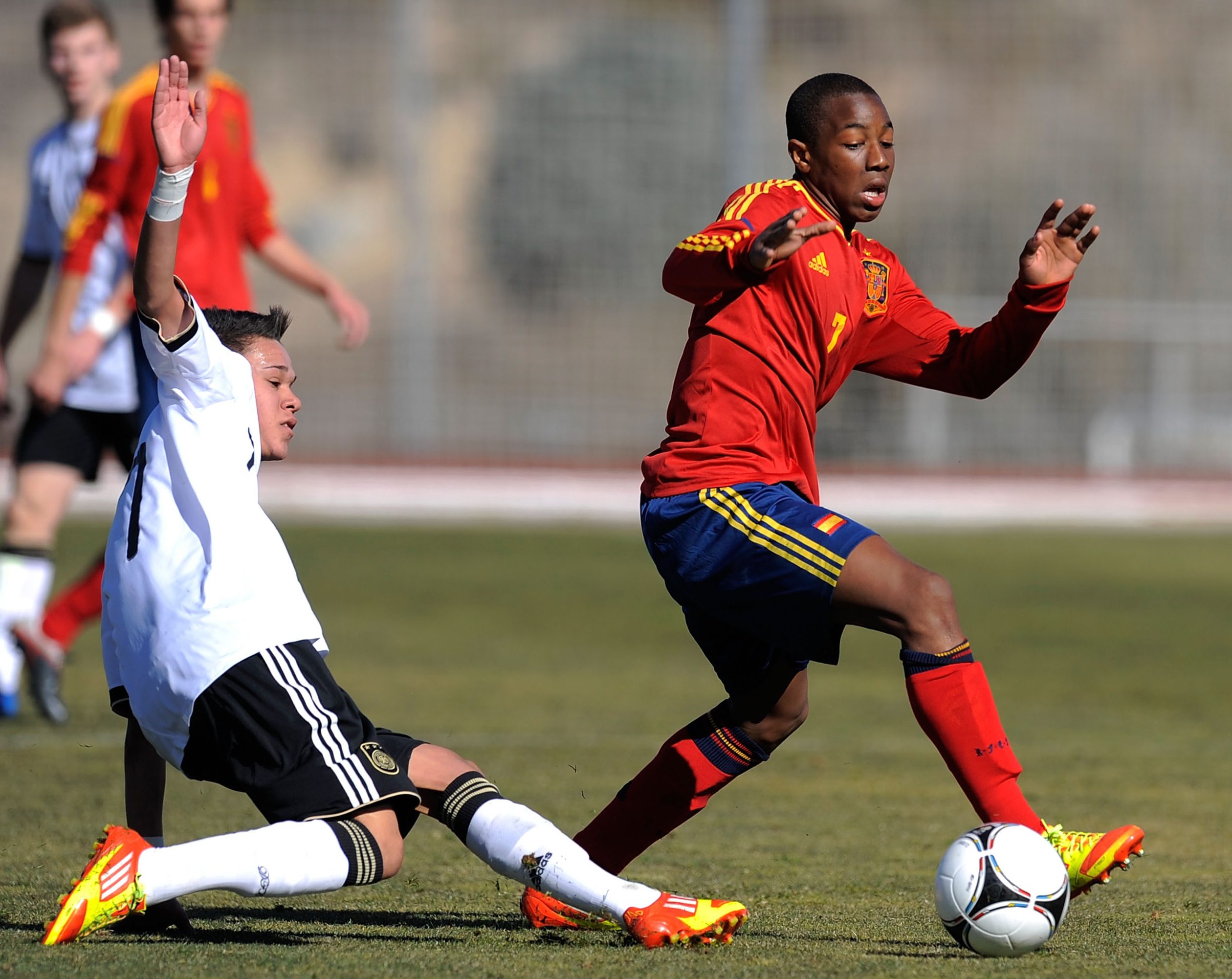 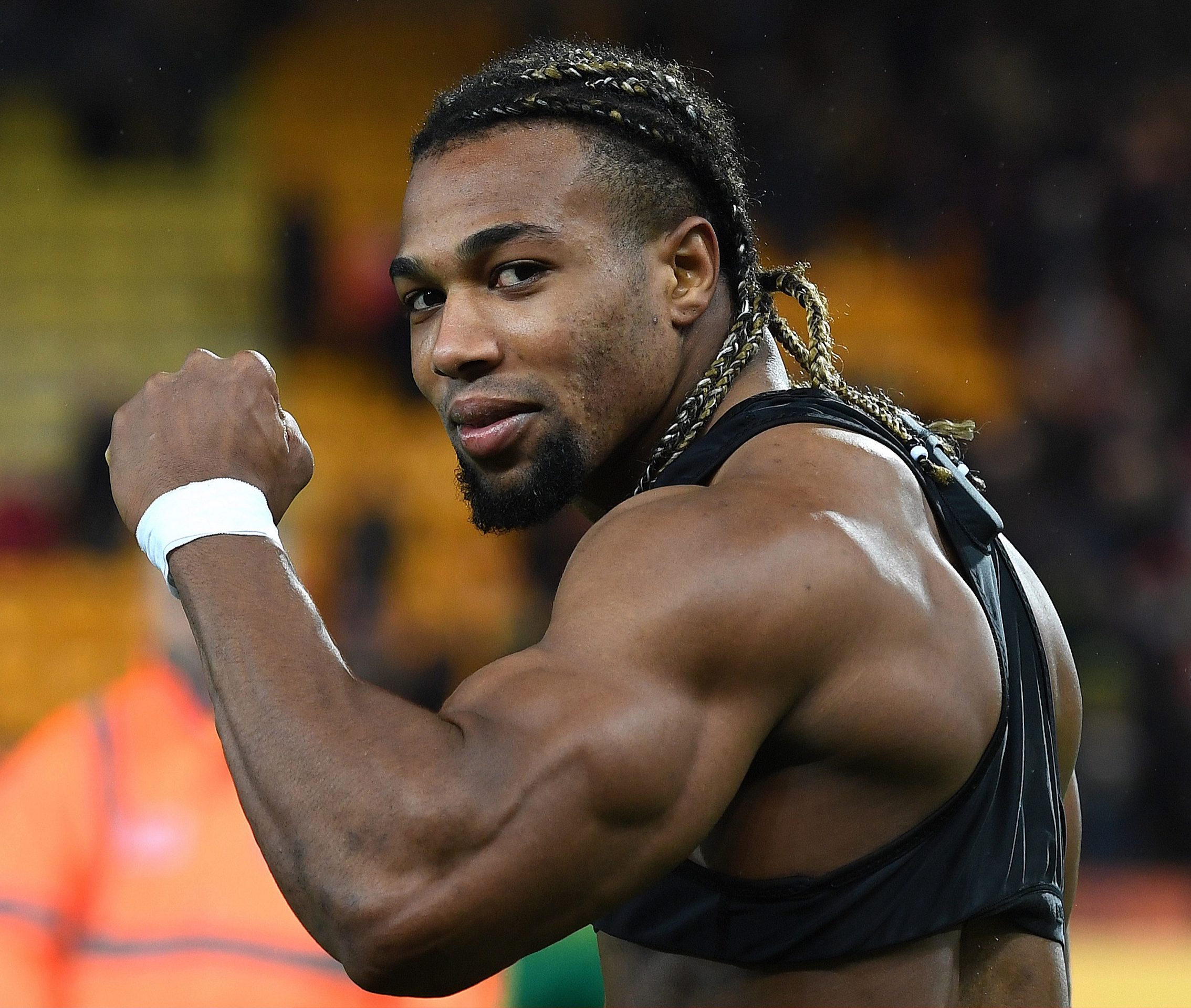 At Wolves, Traore showed off his hench physiqueCredit: Getty – Contributor

You don’t get the nickname ‘The Beast” for nothing, as well as a 98 strength rating in FIFA 20.

To fuel his weights sessions, the striker eats like a beast too, although his weight does go up and down.

“Breakfast is Weetabix with honey,” he told the Daily Mail.

“At training there will be some kind of chicken. Our chef personally does chicken for me and that makes me very happy.

“Then a shake in the afternoon. For dinner, again it’s probably chicken, potato and coleslaw. My partner is half-Nigerian, half-Caribbean so it may be the curry goat, rice and potato. It’s the carbs I need to eat.

“I throw in the odd Nando’s. Quarter-chicken, medium breast, chips, corn on the cob and five wings. I don’t deviate.” 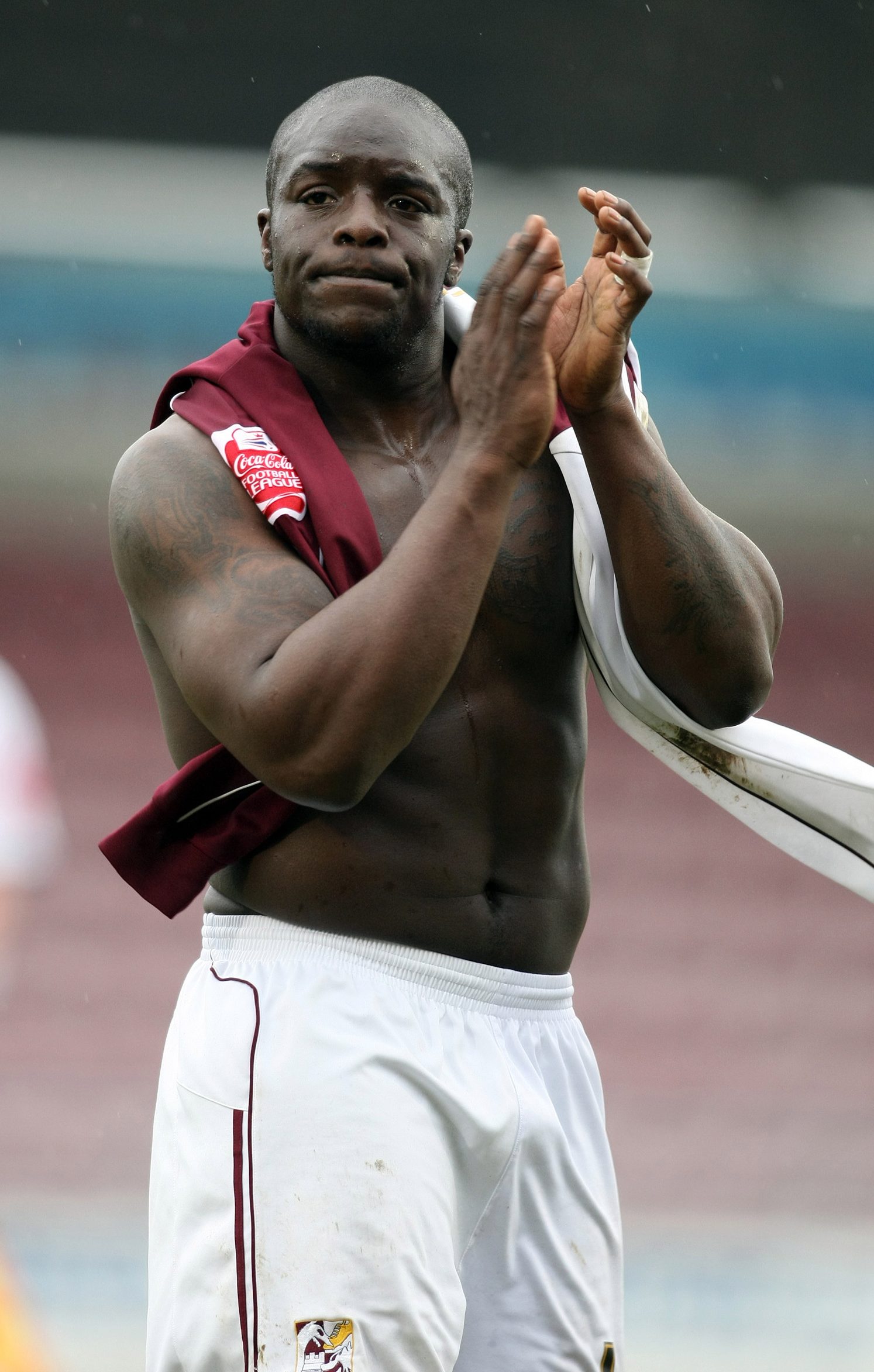 Adebayo Akinfenwa had a smaller frame during his time at NorthamptonCredit: Getty Images – Getty 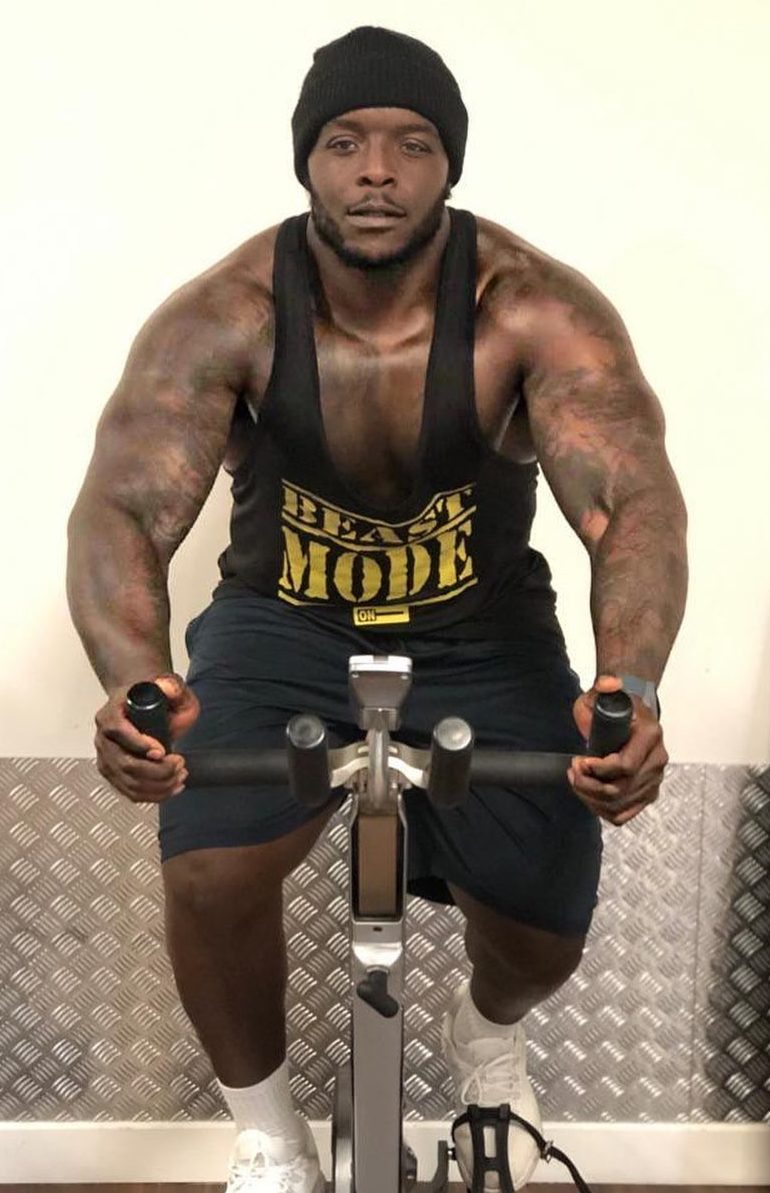 Akinfenwa is now nicknamed The Beast because of his enormous size

The aptly named Brazilian striker has always been admired for his physical stature.

Built like a truck, Hulk is currently terrorising defenders back in Brazil for Atlético Mineiro, who he led to the Brazilian title.

But there was a time when the former Porto star looked a little overweight, rather than chiselled.

He has toned up now, and looks fitter than his 35-years suggest. 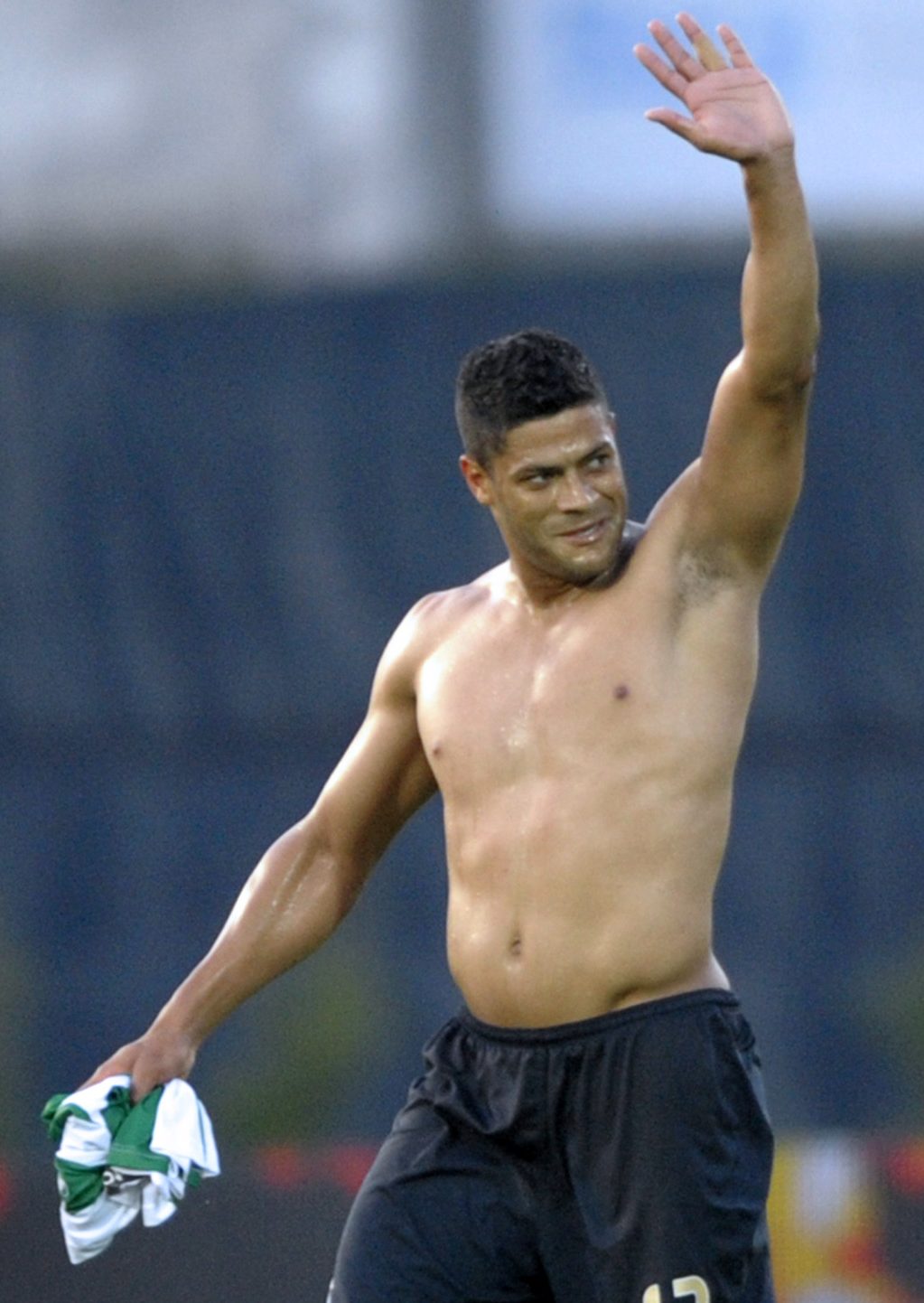 At Porto Hulk was a little rounder and squarerCredit: AFP – Getty 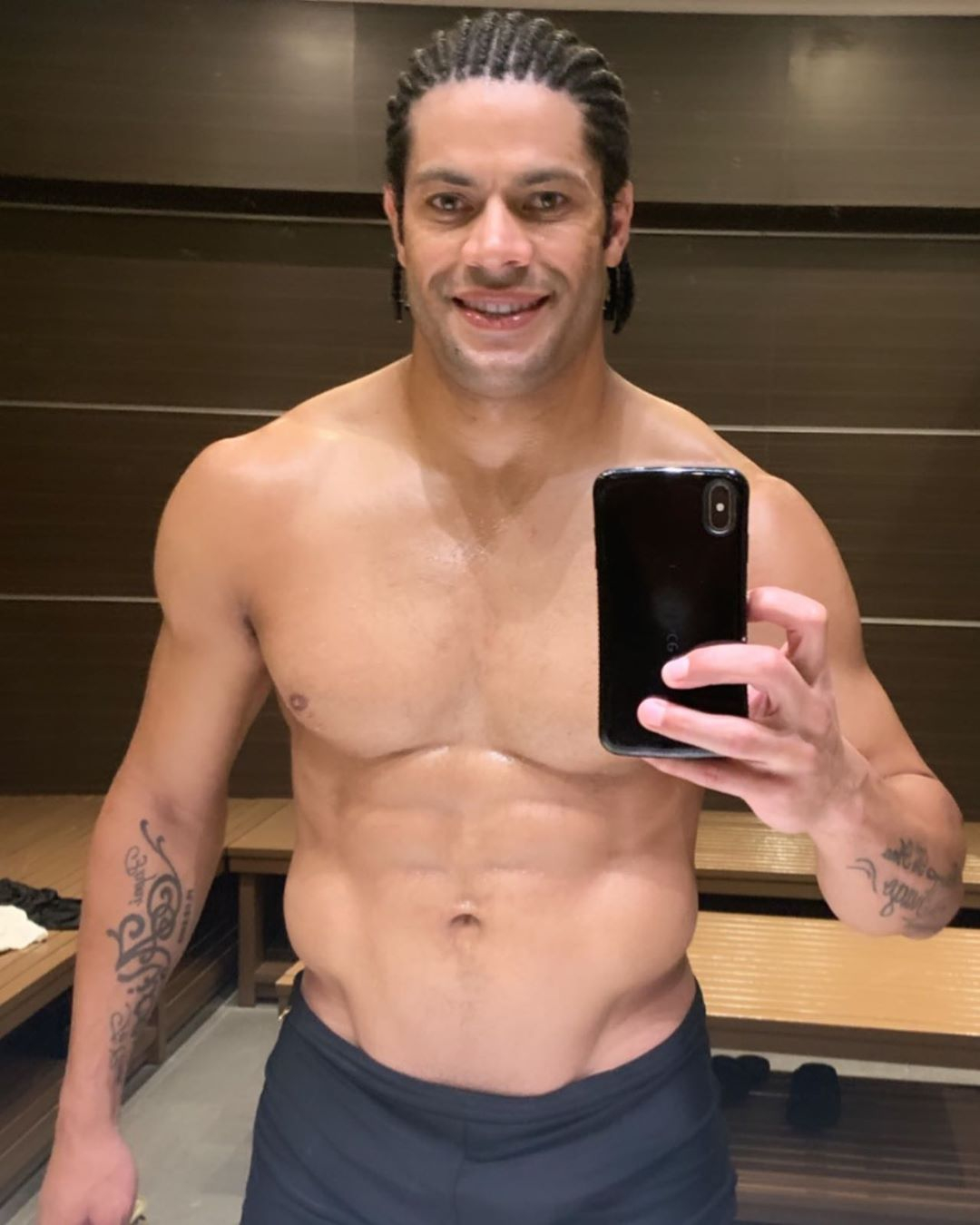 Now plying his trade back in Brazil, Hulk is leaner, more muscular and fit as a fiddle

When he was at Sevilla, he was just a beanpole of a defender. Now, he’s the real deal.

“My training routines at home are usually focused on functional and isometric exercises, always ending with some cardio work,” the  Paris Saint-Germain signing revealed.

And for Sergio, a healthy breakfast is the perfect to start the day.

He revealed: “I usually take a coffee, some whole-grain bread with protein like turkey breast or a poached egg, and a piece of fruit.” 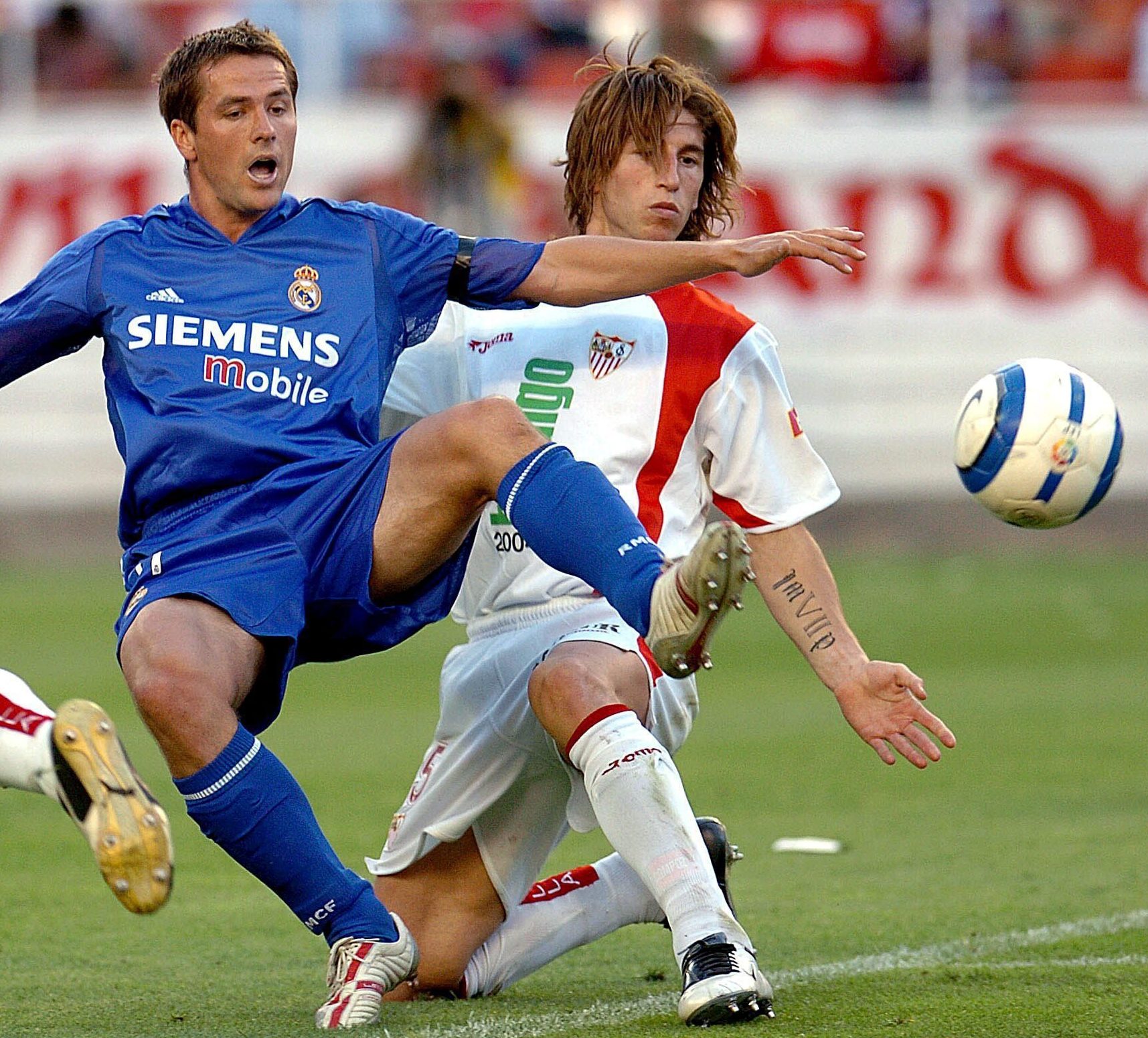 When he began his career at Sevilla, Ramos was a beanpole of a defenderCredit: EPA 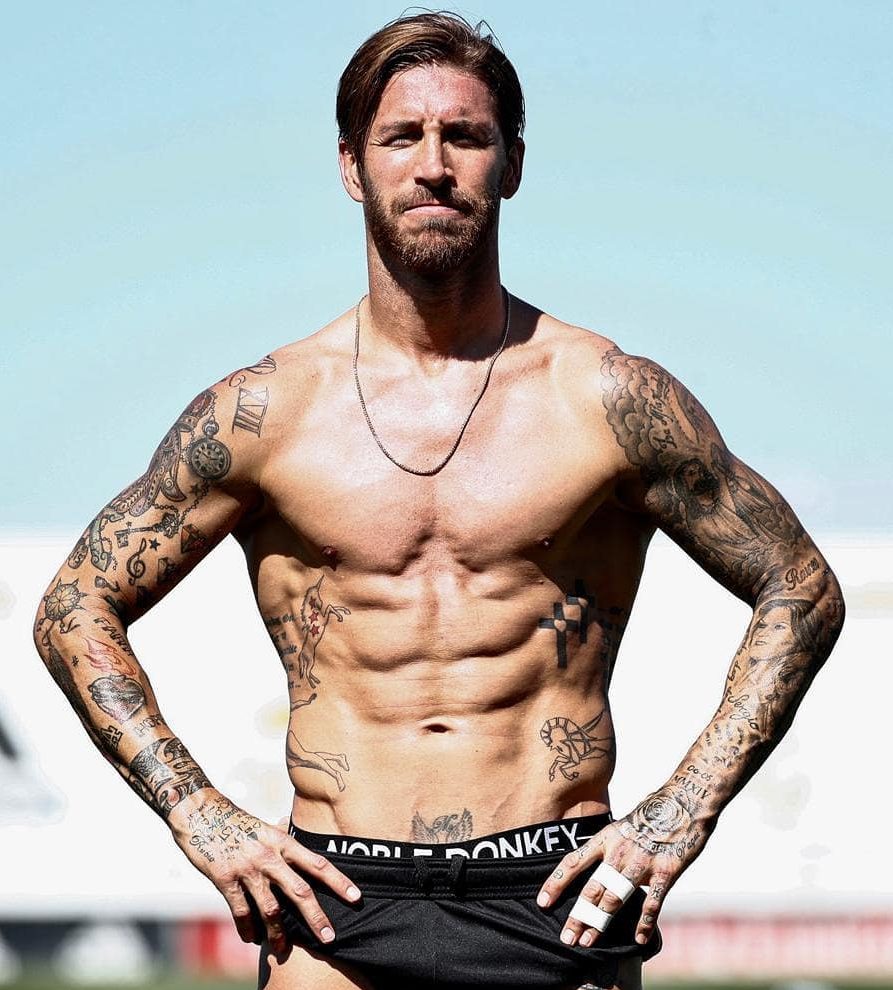 Ramos is now one of the most chiselled footballers around

There’s no doubt about it, Elokobi is hench.

The former Wolves star, now playing for National League side Maidstone United, was always a crowd favourite because of his size.

At only 5ft 9inches, he isn’t the tallest. But he earned the nickname of ‘The Body’ at Molineux because he was pure muscle.

The defender even stripped down to his smalls on the catwalk during a charity fashion show at the club. 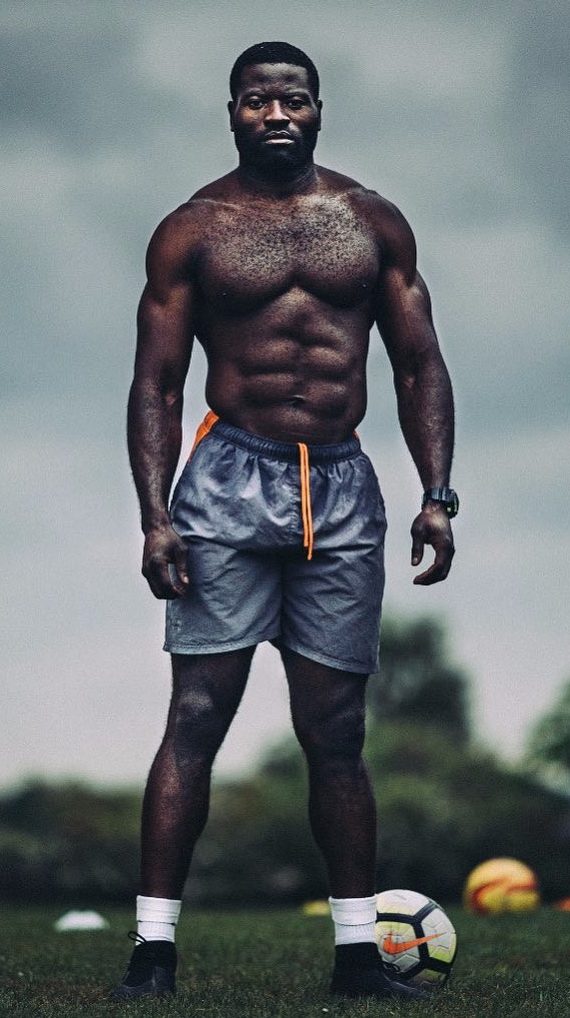 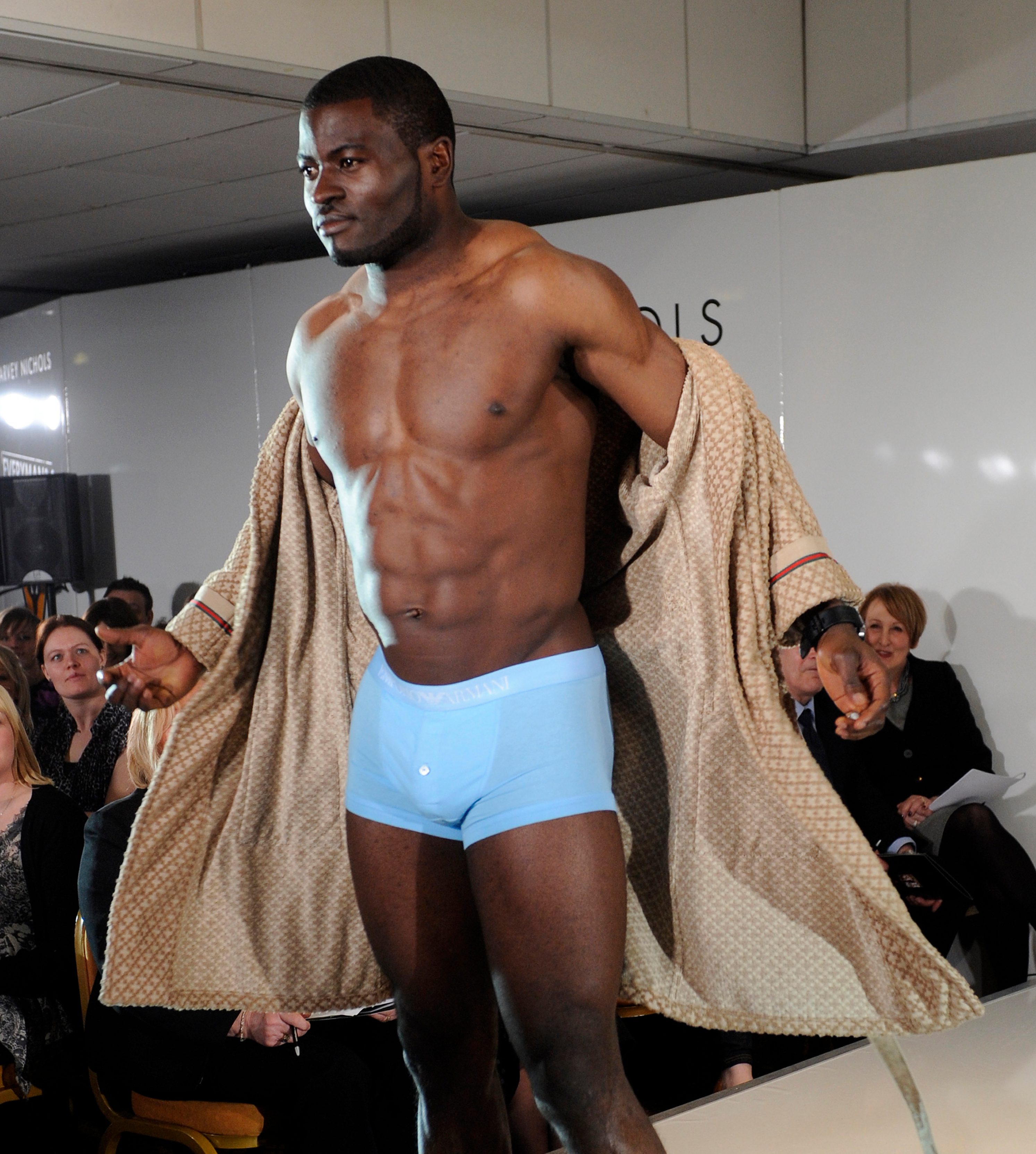 Elokobi even stripped down to his smalls to show off his six-pack for a charity fashion showCredit: Matthew Ashton

But after celebrating scoring for Italy against Germany in Euro 2012, he was keen to show off a ripped torso as he flexed his muscles shirtless.

However, the normally fit Balotelli was anything but in 2018 when he returned to training for Nice reportedly two stone overweight when a move to Marseille collapsed.

He soon dropped half a stone and was back to normal and is now playing for Turkish outfit Adana Demirspor. 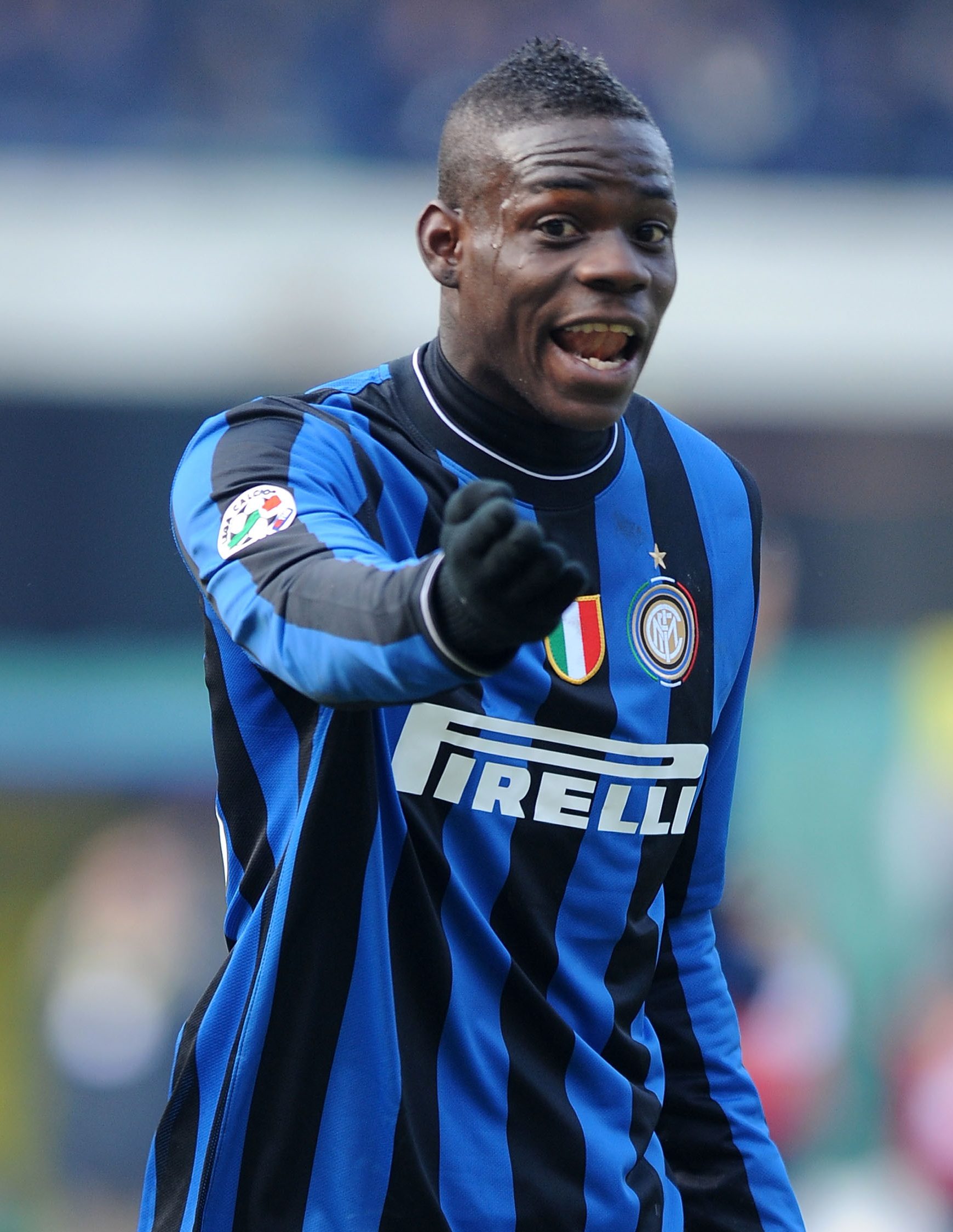 When Mauro Balotelli first emerged on the scene he was leanerCredit: Getty Images – Getty 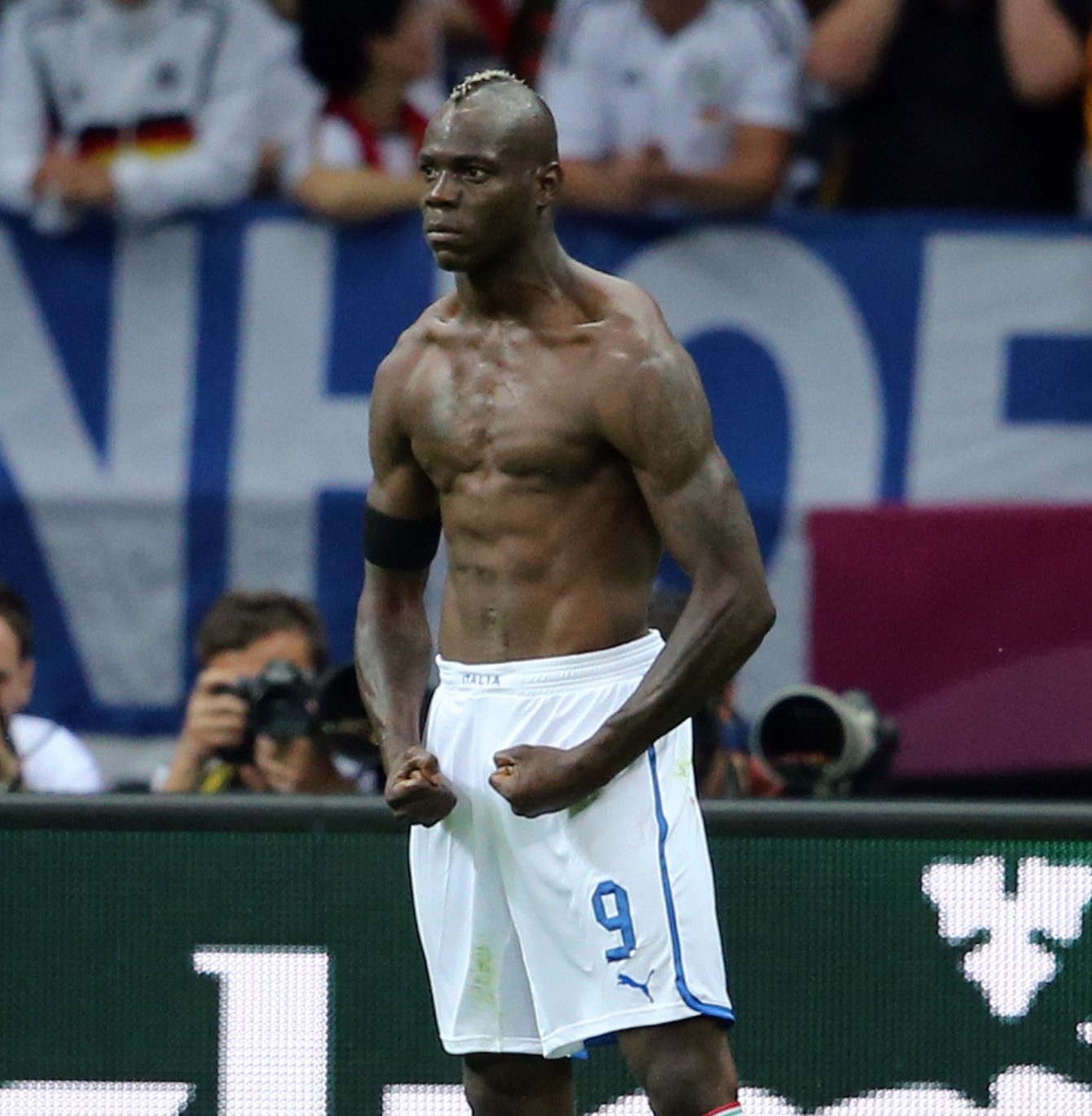 At Euro 2012 Balotelli flexes his muscles after scoring against GermanyCredit: Corbis – Getty

Former Manchester United star Sanchez enjoys working out alone, and shared a video online strutting his stuff at their Carrington training ground to the famous Rocky theme ‘Eye of the Tiger’ in 2019.

Sanchez has also been seen in the past enjoying sprint drills on the beach. After all, even in pre-season you can’t down tools in the summer.

Standing at 5ft 6in, the former Gunner knows he needs strength as an attribute for his game to thrive. And he looks the business after rediscovering his form in Italy. 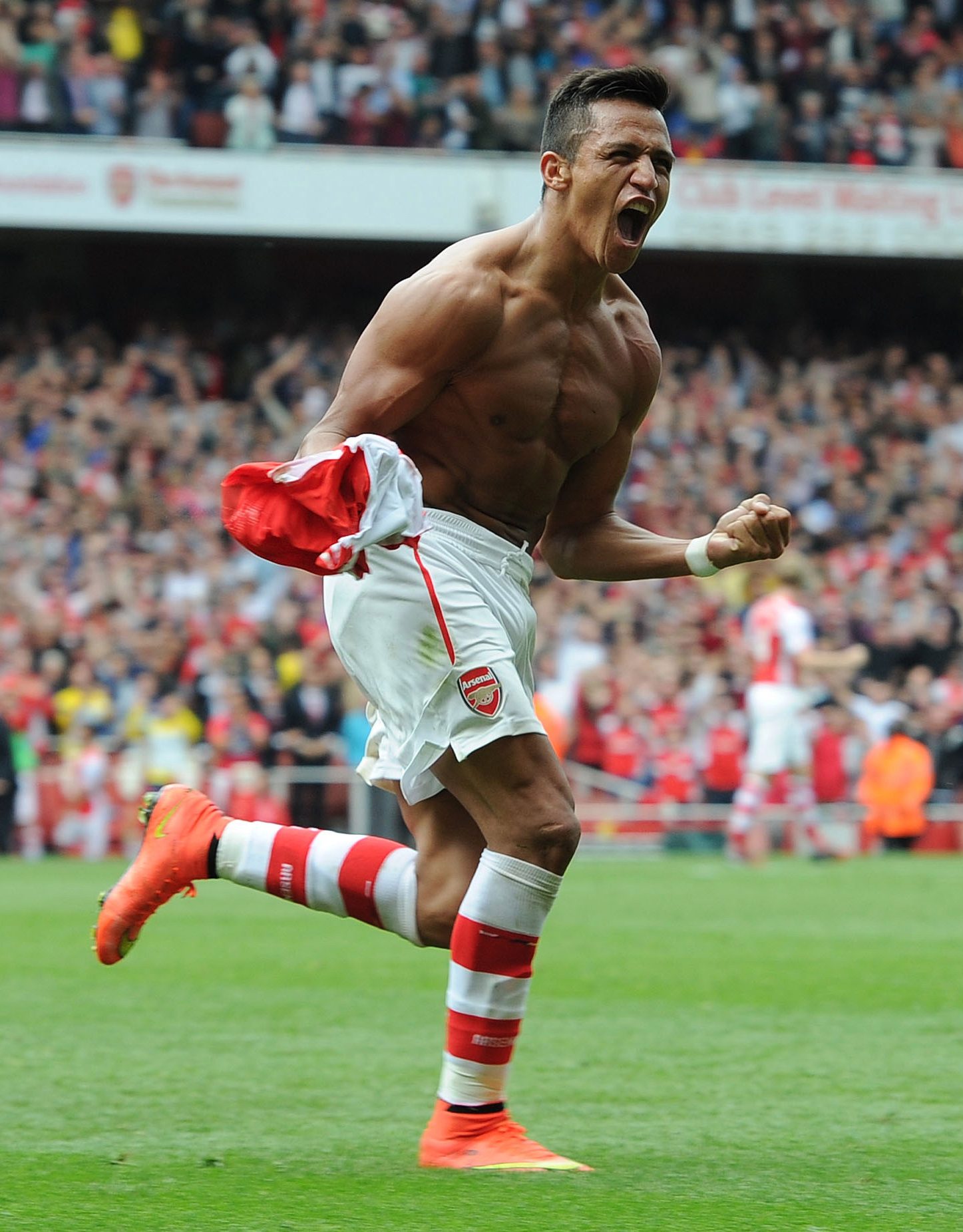 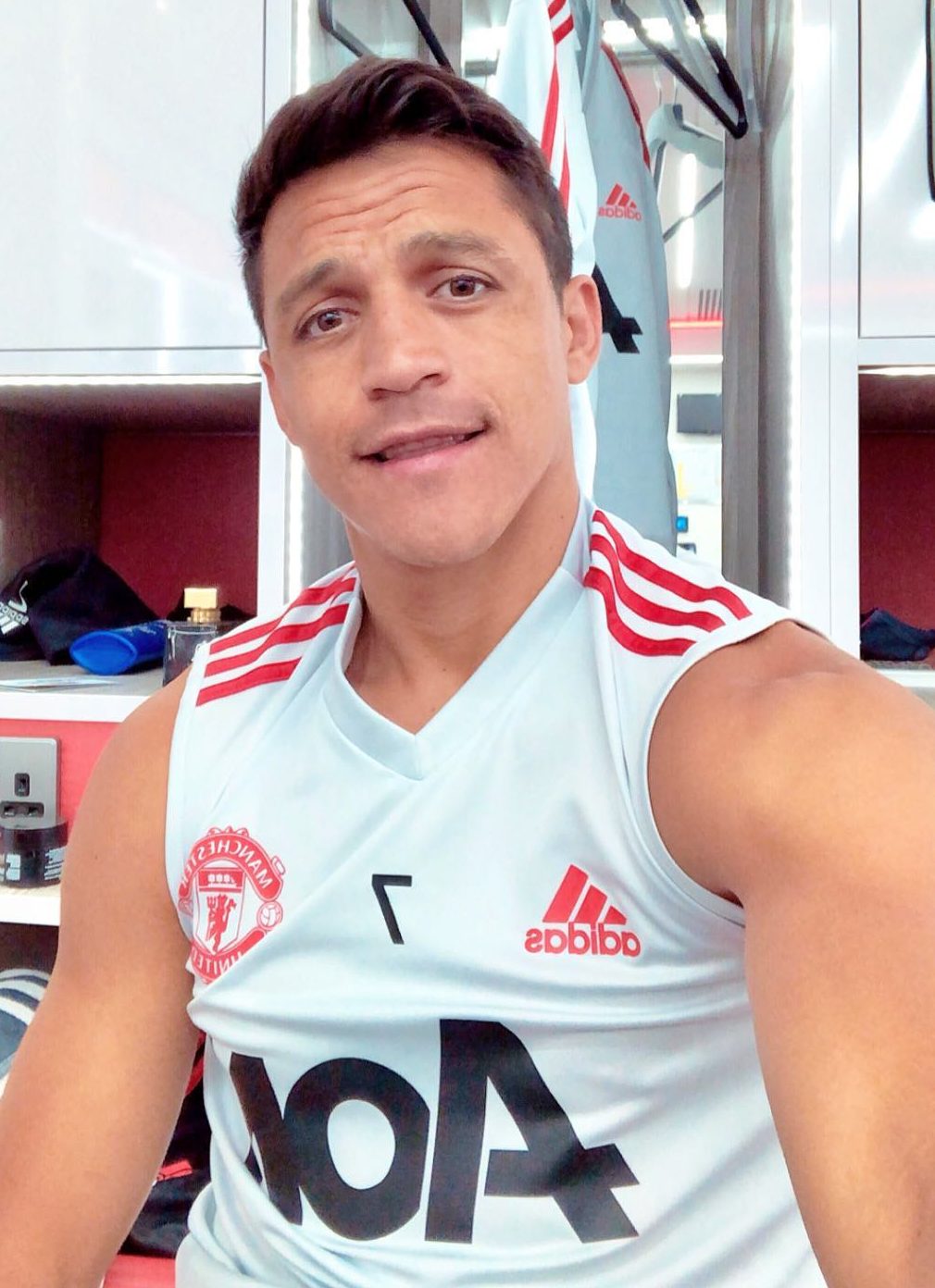