LAGOS, Nigeria—The first sign that something was wrong at Lekki Toll Gate came when the lights went out.

David Emmanuel, Feyishara Temitope and hundreds of other Nigerian protesters had gathered on Tuesday for the 13th straight night at the intersection in an upscale zone that had become the symbolic home for two weeks of nationwide demonstrations against police brutality in Africa’s most populous nation.

Shortly before 7 p.m., the fluorescent streetlights that illuminate the neighborhood of shopping malls and office towers fizzled out, plunging the street into darkness, according to several of the protesters present. Within 30 minutes, Nigerian soldiers had emerged from gun trucks, the protesters said.

As demonstrators began to sing Nigeria’s national anthem, “Arise O’ Compatriots,” the soldiers fired live rounds at the unarmed protesters, leaving a number of people dead and flags stained with blood, and filling Nigerian social-media feeds with images that have prompted condemnation from around the world.

“We thought they wouldn’t shoot anyone singing the national anthem,” said Mr. Emmanuel, a 26-year-old cellphone salesman who was tasked to hold the largest Nigerian flag. 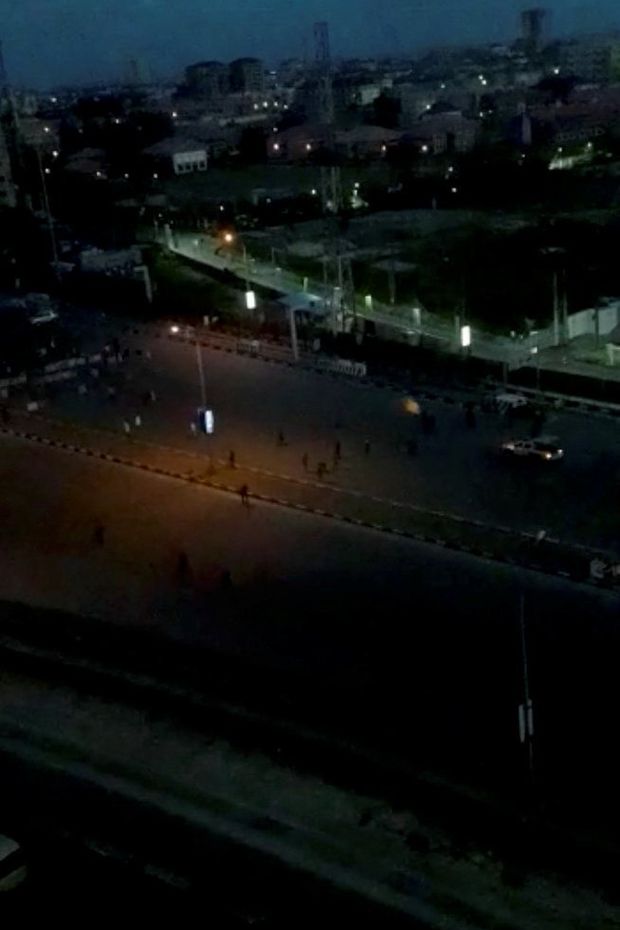 An image taken from a video showing Nigerian police shooting at protesters.


“I saw 10 bodies in the street. I was in deep shock, I thought I was watching an American movie,” said Ms. Temitope, a 32-year-old banker.

The number of people killed and wounded in Tuesday’s crackdown remains undetermined. Witnesses have given The Wall Street Journal varying estimates of how many bloodied corpses they saw at the Lekki Toll Gate of between five and 20. Amnesty International said it had identified at least 10 people who died from their injuries in what it said “clearly amounted to extrajudicial executions.” U.S. officials in Nigeria said they “determined conclusively” that the army was responsible and have called for an immediate investigation.

Several videos that corroborated the witnesses’ testimony were verified by the Journal and Storyful, a social-media verification company. Storyful is owned by the Journal’s parent company, News Corp.

Nigeria’s federal government has refused to comment on the incursion, pending an investigation. An army spokesman first referred questions about the killings to the police, before denying the army was involved. After days of silence, President Muhammadu Buhari addressed the nation Thursday evening, calling for protesters to leave the streets but making no mention of Tuesday’s attack.

Violence escalated after two weeks of unrest in Nigeria, as witnesses accused soldiers of shooting and killing several demonstrators. Here’s how a protest movement against police brutality known as #EndSARS expanded into broader calls for change. Photo: Sunday Alamba/Associated Press

“This government respects and will continue to respect all the democratic rights and civil liberties of the people,” Mr. Buhari said. “But it will not allow anybody or groups to disrupt the peace of our nation.”

The military operation at Lekki Toll Gate appears to have deepened the rifts between the government and many of those governed in Africa’s largest oil producer. The street protests against police brutality have dissipated and given way to widespread looting and vandalism. Angry mobs have roamed parts of Lagos, torching police stations, killing at least one officer, attacking the property of government loyalists and looting department stores.

Sporadic gunfire could be heard in several city districts through Thursday. The Oba of Lagos, the region’s traditional but ceremonial king, had to be evacuated from his palace by the military. By Thursday evening, 10 states were under 24-hour curfew.

Mr. Buhari said in a statement Friday that 51 civilians, 11 police officers, and seven soldiers had been killed in the recent unrest. He didn’t say how many of those died at the toll gate, or who had killed the civilians. “The mayhem has not stopped,” he said.

For the U.S., which considers the country of 206 million its most important military ally in sub-Saharan Africa, the demonstrations and the government’s deadly response have become a policy problem. 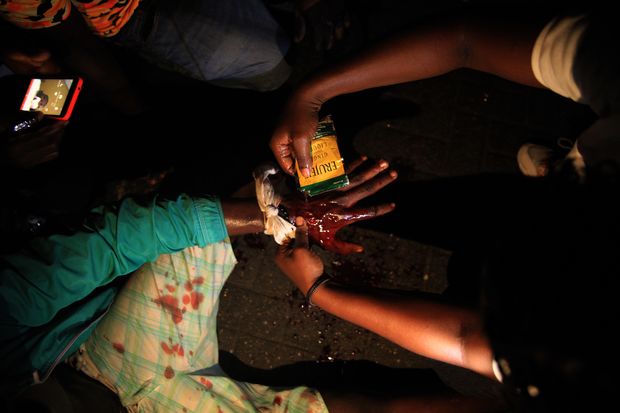 People came to the aid of a man wounded when security forces officers opened fire at Lekki Toll Gate.

In a sign of the complexity of that bilateral relationship, three of the U.S. State Department’s top officials arrived in Abuja in the hours before the Lekki killings on what two U.S. diplomats described as a fact-finding trip to learn more about the drivers of instability in Nigeria. The U.S. is also hoping to sell Nigeria jet fighters and attack helicopters, an issue they discussed during the trip. The administration is in the early stages of drafting a plan to help Nigeria confront its security challenges, U.S. officials said.

The U.S. released a statement on Thursday, a day after the U.K., the European Union and other allies did the same. “The United States strongly condemns incidents of military forces firing on unarmed protesters in Lagos,” said Secretary of State Mike Pompeo. “Those involved should be held to account under the law.”

The protests may be fracturing on the streets, but they will have a lasting impact, political and military analysts say, sparking a political awakening of Nigerian youth—a large number of whom didn’t vote in last year’s presidential election.

Organized under the hashtag #EndSARS, the demonstrators initially campaigned for a notorious police unit, the Special Anti-Robbery Squad, to be disbanded and officers prosecuted for extortion, rape and murder. Nigeria’s government has dissolved SARS and pledged to investigate the allegations of misconduct against its officers.

But the demonstrations quickly evolved into a broader movement against inequality, corruption and nepotism, exploding into the public consciousness via an amorphous, social-media-driven campaign led by middle-class Nigerians reminiscent of Black Lives Matter in the U.S. The demonstrations fit into an emerging global pattern of youth-led calls for change, from Hong Kong to Sudan and Chile.

On Thursday, the African Union denounced the killing of unarmed protesters and the United Nations called for “root and branch” reform of Nigeria’s security services. “There is little doubt that this was a case of excessive use of force, resulting in unlawful killings with live ammunition, by Nigerian armed forces,” said Michelle Bachelet, U.N. high commissioner for human rights.

Some senior Nigerian officials say the protests are part of a plot to create tensions among the country’s different ethnic and religious groups. They stress that not all Nigerians have the same view of SARS: In the country’s northeast, where the government has been fighting a decadelong insurgency against jihadist group Boko Haram, SARS is seen as an effective fighting force.

Many Nigerians feel that two decades after the end of military rule and the advent of democracy, little has changed. 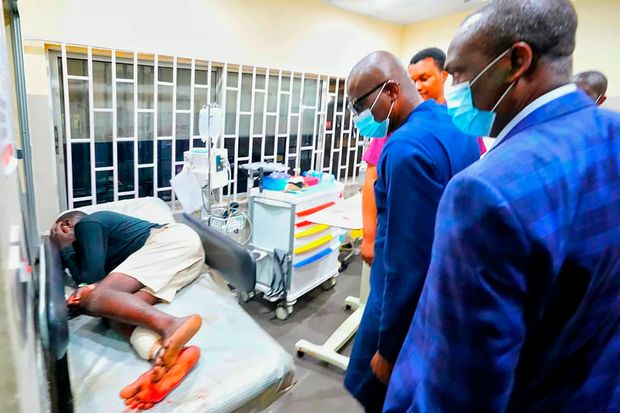 The minutes before the Lekki incursion were full of hope.

Nigerian comedian Ayo Mukun, known as AY, had just finished addressing the protesters, instructing them to wave the country’s green-and-white flags to show they were peaceful, according to seven protesters present and video from the scene. The crowd, expecting a possible deployment of security forces, had practiced singing the national anthem while sitting cross-legged on the ground.

Protesters swept the ground to remove stones, bottles or anything that might be thrown at police officers. The comedian was replaced on stage by DJ Switch, a household name in Nigeria who won the country’s equivalent of “The X Factor” and has collaborated with American rapper Busta Rhymes.

Mr. Emmanuel and Ms. Temitope listened as DJ Switch warned the crowd that soldiers were reportedly heading for the toll gate, but said that if the demonstrators waved their flags and sung the anthem, they would be safe.

Minutes later, the shooting began. They first heard the dull thud then whistle of tear-gas canisters, cloaking the area in an acrid yellow-colored smoke, followed by the crackle of bullets. Witnesses saw sparks flying from rifles of soldiers moving in formation.

At first, Mr. Emmanuel was confused as to whether the bullets were flying overhead, until he heard screams. He kept singing the national anthem, but people began to sprint away. He dived to the ground and saw a man to his right had been shot on his hand. Another witness saw a man holding his abdomen as blood spilled out. A third saw a man bleeding from the ribs, convulsing. 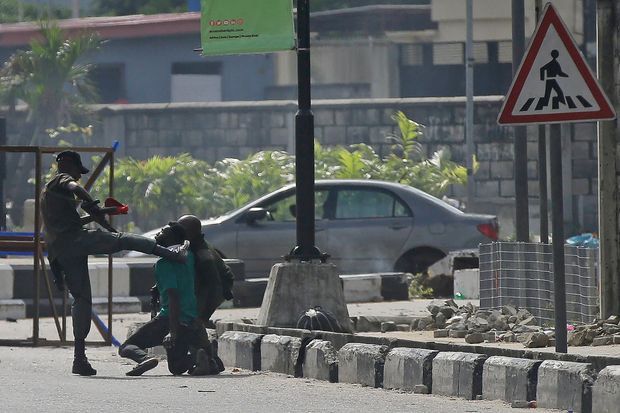 “We realized the soldiers were out to kill us and not to have any discussion. We then lay flat on the floor,” Mr. Emmanuel said. “The shooting continued. It was pandemonium.”

DJ Switch began to live stream the scene on her Instagram feed, with more than 150,000 people watching around the world as protesters tried to treat those with bullet wounds. “Gunshot wounds. Get ambulance for us!” she could be heard shouting. “Ambulance! Ambulance! Ambulance!”

Several witnesses described soldiers refusing to allow ambulances to reach the wounded. “They didn’t say a word, they just kept cocking their guns,” said  an accountant at a multinational firm. She helped carry a young woman. “She was not moving at all, she was bleeding on her neck.”

As Mr. Emmanuel scampered to safety, running for more than a kilometer, Ms. Temitope was looking for her friend and neighbor, Lucy, who had been separated from her in the melee. Ms. Temitope had filmed her friend dancing at Lekki Toll Gate earlier in the day, swaying her hips and laughing in her favorite white Nike baseball cap.

The next time she saw her was on a cellphone screen, sprawled on the back of a truck with a large bullet wound in her head.

“I was just told that Lucy’s body was deposited at the mortuary,” she said. “The soldiers wouldn’t allow the ambulance to come in.”

Write to Joe Parkinson at joe.parkinson@wsj.com and Drew Hinshaw at drew.hinshaw@wsj.com