is zeroing in on the ties that China’s state banks and other financial stalwarts have developed with big private-sector players, expanding his push to curb capitalist forces in the economy.

Mr. Xi, who started his campaign late last year with a regulatory assault on private technology giants, is launching a sweeping round of inspections of financial institutions. According to people with knowledge of the plan, the inspections, announced in September with few details, focus on whether state-owned banks, investment funds and financial regulators have become too chummy with private firms, especially some that have recently landed in Beijing’s crosshairs, such as property giant

The examination, which is led by China’s top anticorruption agency and centers on 25 financial institutions at the heart of the Chinese economy, is the most extensive of a sector Mr. Xi has been suspicious of since coming to power nearly a decade ago. It is part of his broad effort to steer China’s economic system away from Western-style capitalism in the run-up to a leadership transition late next year, when Mr. Xi is expected to sidestep convention and continue his rule beyond the usual two five-year terms.

Evergrande, China’s most indebted property developer, has kept global markets on edge and sparked protests at home as it struggles to survive. WSJ explains why the company’s crisis is raising questions about the state of the world’s second-largest economy. Photo: Alex Plavevski/Shutterstock

Starting this month, graft-busters from the Central Commission for Discipline Inspection are fanning out through the offices of the 25 state institutions, reviewing files of their lending, investment and regulatory records and demanding answers to how certain deals or decisions related to the private firms were made, according to the people familiar with the plan.

These people said individuals who are suspected of having engaged in inappropriate dealings are likely to be formally investigated by the Communist Party and potentially charged later, while any entities found to have gone astray would be disciplined.

The leadership will also use findings from the inspections to decide whether to slash the compensation of the executives at these state financial juggernauts. Some officials at the Ministry of Finance, which funds big state financial institutions, have been pushing for the cut as compensation in the financial sector is seen as too high compared with that of other industries.

At a Sept. 26 meeting aimed at mobilizing the troops ahead of the new inspections,

current head of Mr. Xi’s anticorruption body, said the inspectors in charge of examining the 25 institutions will “thoroughly search for any political deviations,” according to the official Xinhua News Agency.

Neither the Central Commission for Discipline Inspection nor the information office of the State Council, China’s cabinet, responded to questions. Press offices for the 25 institutions being examined and the other companies mentioned in the article also didn’t respond to inquiries.

The financial-sector scrutiny comes as Beijing is also trying to address the economy’s dependence on debt-fueled construction sprees, which is prompting turmoil in China’s property sector. By expanding his economic campaign, Mr. Xi risks unleashing dynamics that could severely cut into growth in coming months.

Amid the uncertainty, many banks are already pulling back from lending to private developers and other businesses, analysts said.

“When uncertainty goes up, the only way to react is to stop doing what you’re doing,” said

a finance professor at Peking University. But a slowdown of economic activity in the private sector—from tech giants unsure of the regulatory climate to private developers whose lending spigot is cut off—presents a dilemma for Beijing. “Without ‘bad’ lending, you’re not going to achieve the growth target,” Mr. Pettis said.

That could force the government to step in with its old stimulus playbook of ramping up state lending for infrastructure investments—deepening imbalances that leaders have pledged to address that tilt lending away from the private sector.

Mr. Xi’s goal, some officials said, is to make sure the party exerts full control over the economic lifeblood of the country, preventing the financial sector’s capture by big private businesses and other power players that threaten the state’s influence.

Details of anticorruption probes are often murky. During his early years in power, Mr. Xi used a wide-ranging campaign to both clean up a party plagued with corruption and to take down or sideline political rivals to secure his hold on power.

who gained prominence while running state-owned

in the 1990s and for years had installed people close to him in important positions at state-backed financiers, including China Construction Bank.

While serving as Mr. Xi’s antigraft czar during the leader’s first term, Mr. Wang largely avoided investigating the financial sector, while he pursued probes into other parts of the economy. But financial risks in China kept building up, in part because of aggressive lending by state banks to some well-connected corporate highfliers.

Mr. Wang’s political influence has diminished in recent months. A longtime aide of his was charged in August with taking more than $71 million in bribes. Mr. Wang has had connections to some of the financial firms that are now facing scrutiny, according to the people with knowledge of the plan.

China Construction Bank’s lending to HNA is expected to be part of the new round of inspections, the people said.


State banks’ lending to faltering developer Evergrande, in particular, will also be examined, according to the people familiar with the plan. Once an industry darling, Evergrande is now facing one of China’s largest-ever defaults as it struggles with more than $300 billion in liabilities.

One of Evergrande’s main lenders is financial conglomerate Citic Group, which is now being scrutinized. Over the years, the lenders at Citic, founded in the late 1970s by Rong Yiren, China’s most famous “red capitalist,” to experiment with capitalism, have created the closest thing China has to a Wall Street culture.

They take risks that some traditional lenders have shunned, going as far as creating investment funds for firms such as Evergrande. For instance, when the developer needed money for projects in 2015, according to people with knowledge of the matter, it received a pledge of about $3 billion from Citic. Citic then folded the funds into investment products sold to individual investors, promising a high rate of return funded by the loan payments from Evergrande. A potential default by the developer would put the investors’ money at risk.

In the past few years, despite Beijing’s repeated warnings against real-estate lending, Citic has provided more than $10 billion to Evergrande, according to people close to the bank.

Xie Hongru, who had run Citic Bank’s office in the southern city of Guangzhou, near Evergrande’s home base of Shenzhen, has been under investigation by the party’s disciplinary officials since last month, according to the anticorruption agency. Mr. Xie managed the bank branch from 2015 to 2018, a period when Citic ramped up its funding to the developer. The new round of financial inspections will subject the bank to a broader examination of its lending practices.

Late last month, Fang Heying, Citic Bank’s chief financial officer and its highest party official, told investors that the bank had taken measures to reduce its overall exposure to Evergrande and set aside more funds to prepare for possible losses from its financing of the developer.

Other big state lenders to Evergrande, including the bank owned by conglomerate China Everbright Group and

, one of the country’s Big Four banks, are also being examined as part of the financial inspection, the people with knowledge of the matter said.

Inspectors will also examine how a coterie of state funds, including sovereign-wealth fund China Investment Corp., or CIC, and those run by big banks and insurers, got to invest in private firms now at the center of Mr. Xi’s tech crackdown, according to the people.

“Do those investments represent the state’s interests or those of a few individuals?” said one of the people. “That’s a key question.” 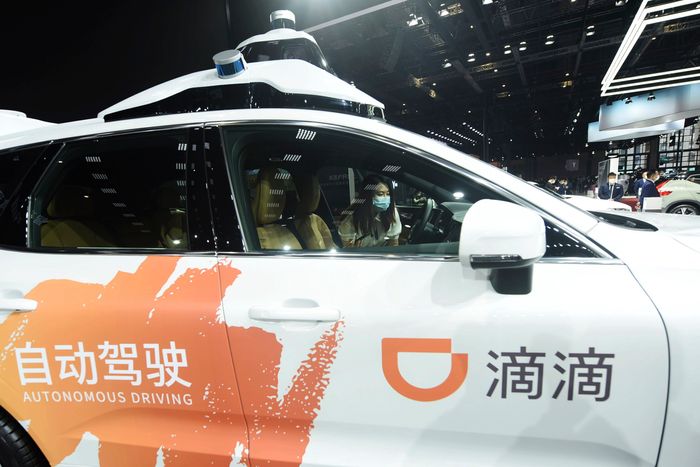 Chinese inspectors are set to scrutinize state banks’ ties to Didi Global, which display this vehicle at a Shanghai auto show in April, according to people with knowledge of the plan.

CIC, whose mandate is to scour outside China for deals, has invested in Ant Group, the beleaguered financial-technology firm founded by

and Didi Global, the ride-hailing company that is undergoing a cybersecurity investigation following its stock sale in New York in late June.

The fund, which has about $1 trillion in assets, has set up an office to cooperate with the inspectors, who are expected to march into its headquarters in Beijing this week, according to people close to CIC. “People are nervous,” one of the people said.

, one of the country’s largest insurers, also has investments in Ant and Didi. In 2016, the insurer invested some $600 million in Didi, bolstering the Chinese company in a fierce competition it ultimately won with

Having such state stalwarts on board helped Ant’s stock-listing application sail through various levels of securities regulators in the summer of 2020, The Wall Street Journal previously reported. With their deep pockets and political connections, these state investors also facilitated Didi’s rapid expansion in the past few years, according to people close to the company.

Regulators, including China’s central bank and the top banking, insurance and securities watchdogs, are also coming under scrutiny for any signs that they might have been negligent in supervising companies or become too close to industry players they are supposed to regulate, according to the people familiar with the plan.

One risk for Mr. Xi and China is that such broad scrutiny could make the country’s financial system even less accessible for smaller private companies already struggling with a lack of financing.

The last time Mr. Xi conducted scrutiny of the financial industry was after the 2015 stock-market crash, which led him to send public-security officials to China’s top securities watchdog and state-backed brokerages to investigate whether regulators worked with the firms to propel the stock selloff in a suspected “financial coup” to destabilize the Chinese economy and Mr. Xi’s rule.

That probe resulted in jail time for a few regulators, banking executives and investors accused of profiting from insider information. It also led Beijing to halt some long-awaited changes such as those aimed at making it easier for private firms to sell shares.