DUBAI—Veronika Poslusna stared, face to face, into the eyes of Michelangelo’s “David,” struggling for words.

“I have to take my time to really feel it,” she said. A moment later, the 30-year-old Czech tourist uttered but one word: “Wow.”

The replica of Michelangelo’s nude sculpture, reproduced using one of the world’s largest 3-D printers, is causing a sensation at the world’s fair in Dubai, United Arab Emirates.

What’s striking about this version is that David’s head is on a different floor from his body. The torso, genitals and legs of the nearly 17-foot-tall figure, while connected to the head, stand in the conference hall below.

Traditionalists are sniffing disapprovingly at the bifurcated view, saying the statue should be viewed in its entirety.

“The decision to display the copy of the David from the top is utterly ridiculous,” said Paul Barolsky, a retired art professor at the University of Virginia, who has studied the sculpture’s history. “It has nothing to do with how the statue was meant to be seen originally….Why not show the work upside down?”

Yet many visitors to Italy’s pavilion at the exposition appear awe-struck at their up-close and personal moment with the renowned biblical hero.

Completed in 1504, the statue of David depicts the eponymous hero steeled and ready to fight Goliath with his slingshot and stone. When officials in Florence, Italy, first unveiled it, onlookers were meant to gaze up from below, showcasing the artwork’s muscular physique and larger-than-life stature.

The vantage point was intentional, according to one academic theory. The statue was placed outside Palazzo Vecchio, the seat of Florence’s government, to ward off the powerful Medici family, which once ruled the city.

David’s eyes looked south toward Rome, where the Medicis plotted a return, and the statue’s presence was a metaphor for Florence as an underdog against outsiders, according to the theory.

Davide Rampello, artistic director for Italy’s pavilion in Dubai, said he wanted people to view David eye-to-eye. The replica head emerges from the ground floor into a room above, which is decorated with a golden mosaic on the walls and a starry ceiling. Mr. Rampello calls it The Theatre of Memory. 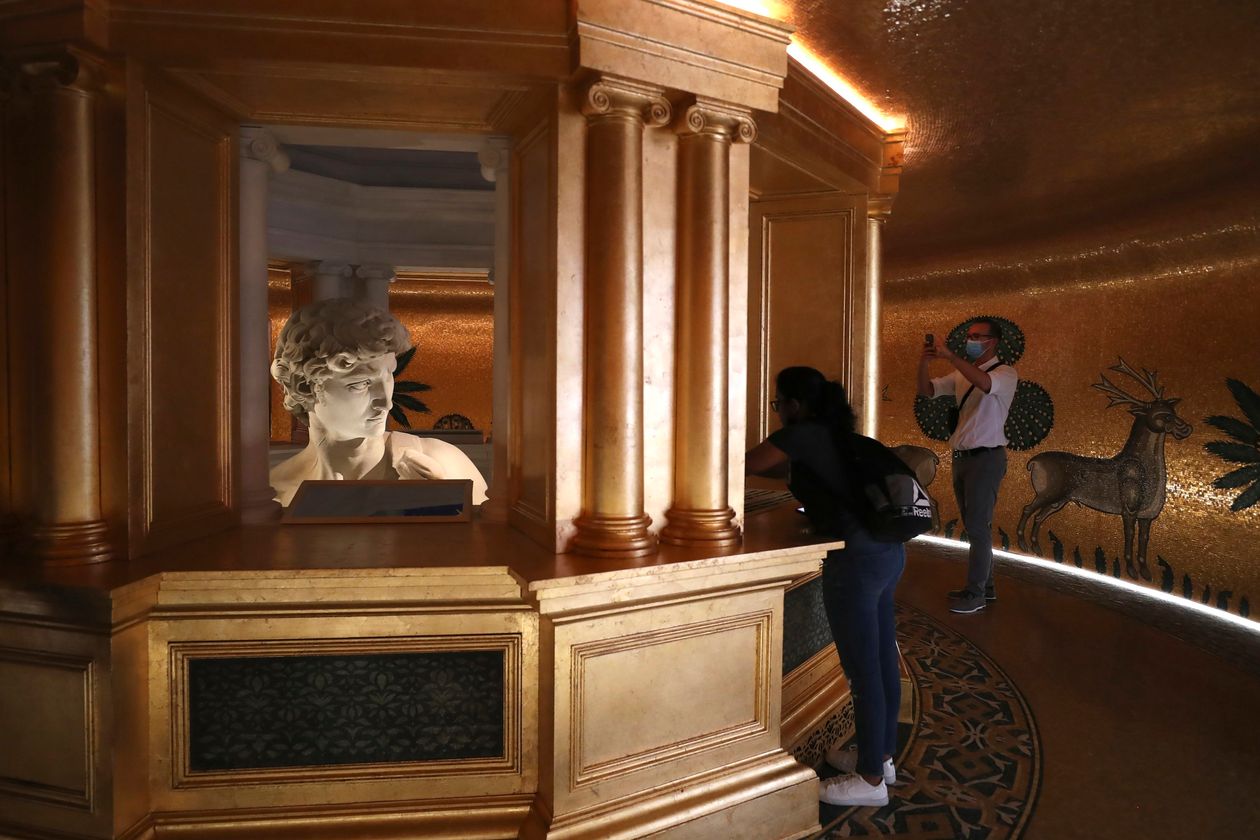 Visitors viewing the 3-D replica of Michelangelo’s ‘David’ at the world’s fair in Dubai.


The exhibit is supposed to highlight how modern society is losing its memory through the habit of recording experiences digitally, Mr. Rampello said. David in the center is a symbol of why people should remember history, he said, “for he is the youth who defeated violence, arrogance, tyranny….This is why David stares his viewers in the eyes.”

The deep view is lost on many visitors. “I was asking myself: What does this mean?” said Vanda Hovhannessian, a U.A.E. resident and executive coach.

“The whole statue would be better,” said Or Ovadia, a 25-year-old Israeli and first-time visitor to Dubai.

Making the replica of the 16th-century marble statue involved 40 hours of digital scanning of the original artwork in Florence, organizers said. Designers then made a three-dimensional digital model and created the statue from filaments of recycled plastic material on the giant 3-D printer.

The figure was a collaboration of the Museum of the Galleria dell’Accademia, the home of the original, the department of civil and environmental engineering at the University of Florence and Italy’s Ministry of Culture. Replicas also stand outside the Palazzo Vecchio, the original location of the statue, and on top of a hill in Piazzale Michelangelo, both in Florence.

Vittorio Sgarbi, a vociferous art critic and politician, isn’t pleased with the split-level display in Dubai. “The Italian state is humiliated, and Italian art mortified,” he tweeted. “Truly disgusting.” 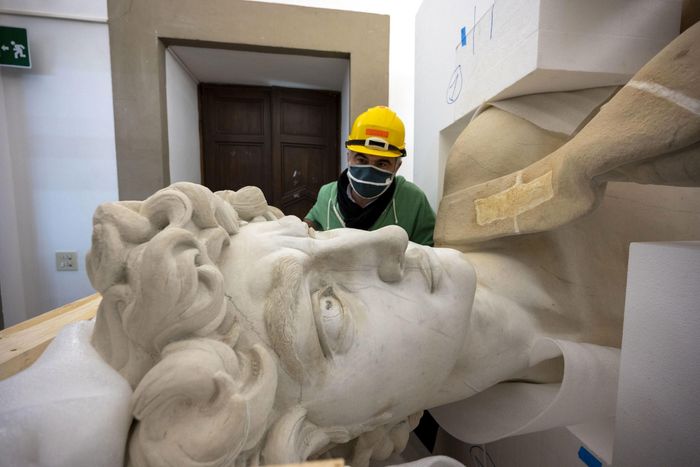 The 3-D copy of Michelangelo’s ‘David’ at a laboratory in Florence, Italy, this year. 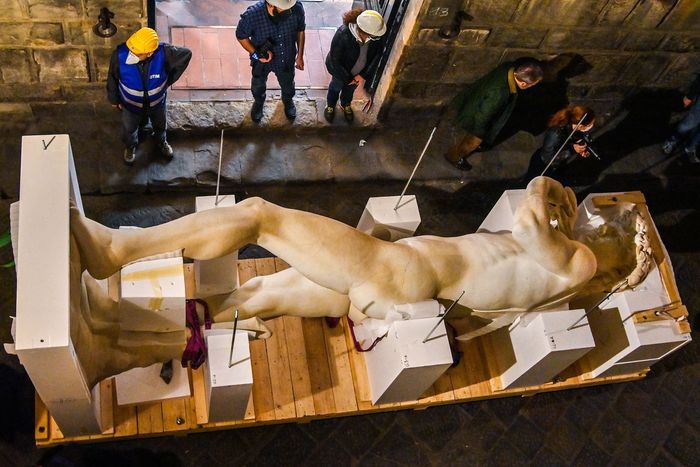 The ‘David’ replica in Florence, Italy, before its journey to the world’s fair in Dubai.

Mr. Sgarbi said the separate floors censor David’s manhood, and he alleged it was done to appease sensitivities in the U.A.E., where laws are based on Islamic strictures and nude images are generally viewed as taboo.

“The U.A.E. government has never not even remotely mentioned any censorial obligation,” Mr. Rampello said. A spokesperson for Dubai Expo 2020 (it was delayed a year because of the pandemic) referred to a statement from the Italian pavilion denying censorship.

Both men and women attended the statue’s unveiling in April, as well as the opening of the pavilion this month. The statue’s full body is visible from the balcony surrounding the head of David. The conference hall below is open to dignitaries and special events.

Italy’s pavilion, based on the theme “beauty connects people,” is one of nearly 200 at Expo 2020, the first world’s fair in the Middle East. The U.A.E. had hoped to attract as many as 25 million visitors and demonstrate the country’s progress 50 years after its founding.

Rose Balston, a Dubai-based art historian and founding director of art experiences company Artscapes U.K., said the introspective Michelangelo would have been “well pleased with this bang-up-to-date” digital twin of his work.

“We have the rare opportunity to look David in the eye as he sizes up Goliath, a privilege that only deepens our understanding of Michelangelo’s staggering handiwork,” she said.

“You see the emotion,” she said, wearing a face mask. “We’ve been 18 months without seeing people’s faces, so it’s kind of nice to engage.”