A woman who wore tight shorts to date almost died from sepsis caused by her wedgie (Picture: TikTok @imtoooldtobeonthi)

A woman has spoken about how she almost died because of a pair of denim shorts she wore on a date.

Sam, 25, says she ended up in intensive care for a week with life-threatening sepsis because of cut-off shorts that gave her a serious wedgie.

She didn’t think it was anything more than a bout of serious chafing until she found a bump on her backside.

Sam, from North Carolina, told BuzzFeed: ‘The next day, I felt very sore and then started feeling ill – just not 100%.’

She described feeling a ‘throbbing, stabbing pain’ so went to a doctor for antibiotics but discovered it was too late.

The next morning, she was in septic shock and had to be rushed to the ER by her mother.

She said: ‘I was shivering, very breathless, could not walk and had extreme body aches.

‘They admitted me to the ICU and that’s when I realized this was a bit more serious than I had anticipated.’ 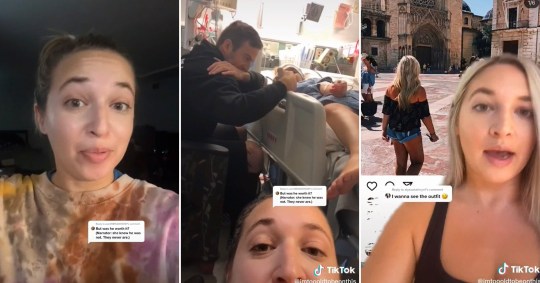 Sam ended up in the ICU with cellulitis and sepsis after wearing too-tight shorts on a day-long date (Picture: Imtoooldtobeonthis Tik Tok )

Sam had cellulitis, a painful skin infection, and sepsis, the life-threatening response the body has to an infection.

Doctors even contemplated debridement surgery, which would cut off the infected part of her butt.

Fortunately she did not need surgery in the end and after three days was allowed to go home where she was told to rest for a month.

She added: ‘Most people were shocked that this could happen, BUT I was extremely surprised at the amount of people saying the same thing happened to them too.

‘I’m happy I made the TikTok, and although it’s extremely scary to have one of the most embarrassing things that has ever happened to me on the internet, it reminds people that we’re all human and experience weird stuff, and it’s nothing to be ashamed of.’

While recovering in the hospital, she got a visit by her date, who then met her entire family and spent the night taking care of her.

Three years later, they are still together.