Flames swallowed entire homes and burned through to their interiors (Picture: AFP)

A wildfire that erupted on the coast of southern California has torn through a strip of multi-million dollar mansions, destroying over a dozen homes.

The fire ignited near a water treatment facility shortly before 3pm local time on Wednesday, growing to almost 200 acres by 8pm.

At least 20 homes were set ablaze and about 100 homes were potentially in the path of the inferno, Orange County Sheriff’s Capt. Virgil Asuncion said.

The fire whipped across hiking trails in the hills and the exclusive enclave where properties regularly sell for millions of dollars. 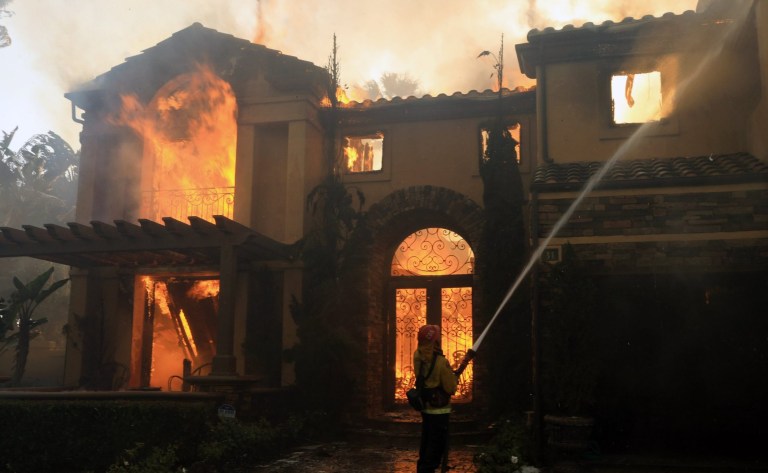 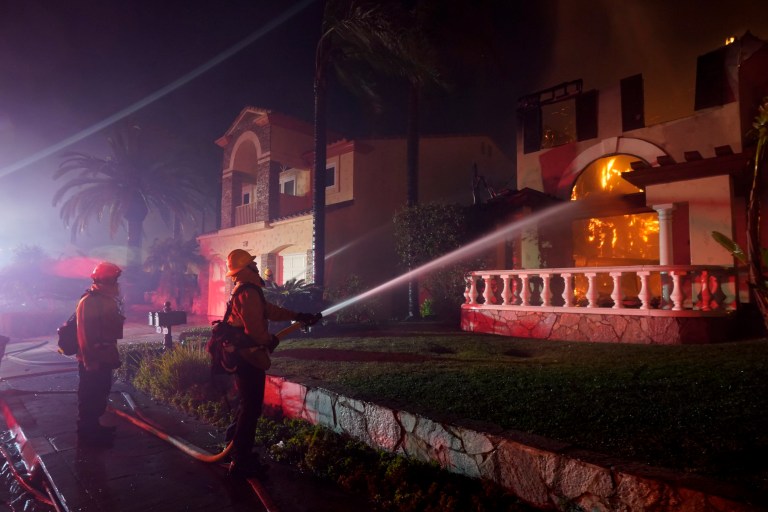 Properties in the area regularly sell for millions (Picture: AP) 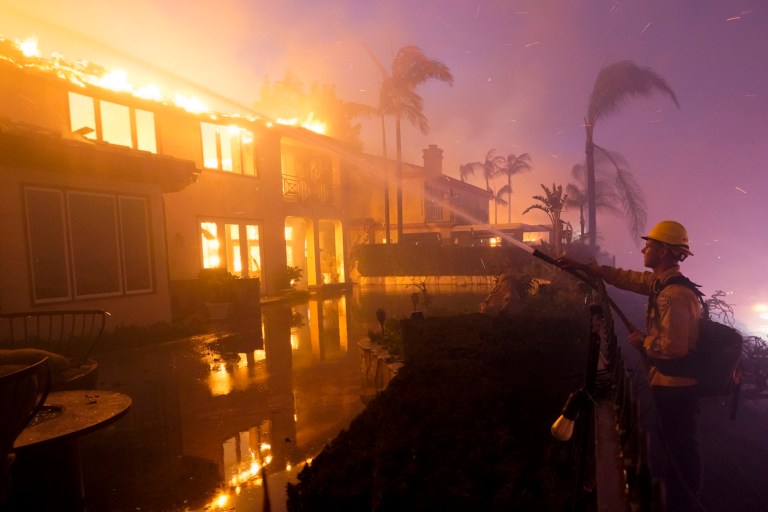 20 homes were destroyed in the fire (Picture: AP) 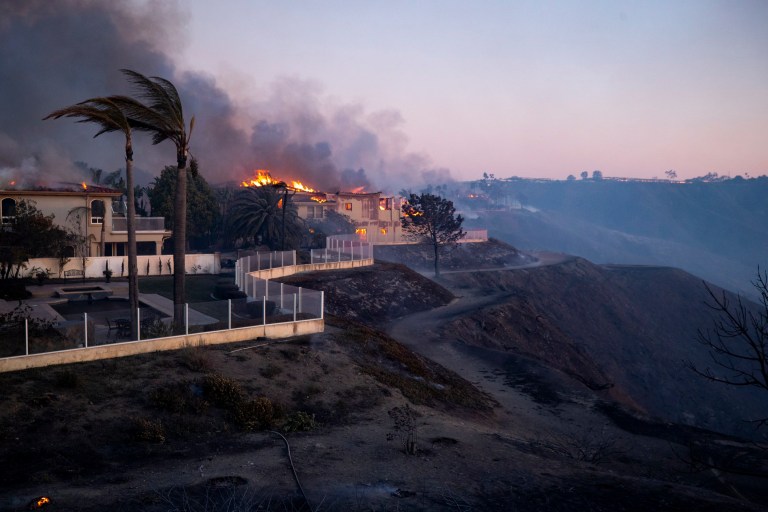 About 100 homes were potentially in the path of the inferno ( Picture: EPA)

One of the damaged homes included a $6.6 million four-bedroom, seven bathroom mansion on Coronado Pointe, which lost its roof entirely to flames.

Firefighters were battling to save the walls and neighbouring properties as flames swallowed entire homes and burned through to their interiors.

Explosions were also heard coming from one home – believed to be the sound of ammunition detonating, according to the Daily Mail.

The fire is not currently threatening Laguna Beach itself , but has forced evacuations in neighboring Laguna Niguel – a hilltop city of about 65,000 people. 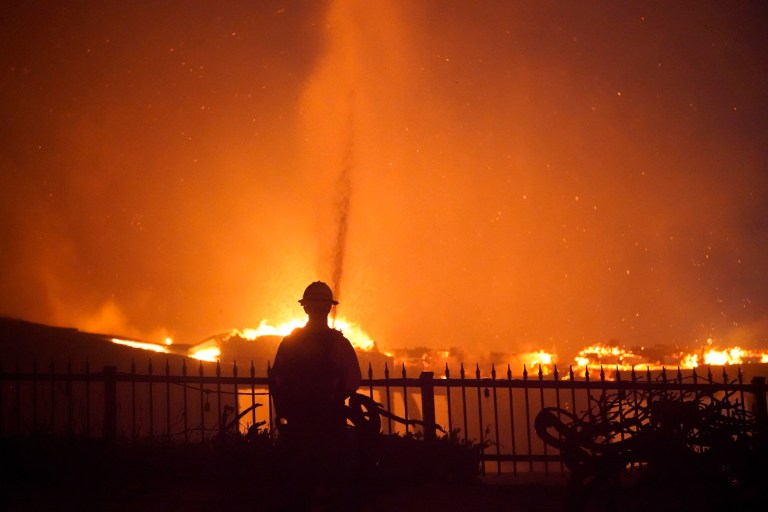 The flames were fanned by coastal winds (Picture: AP) 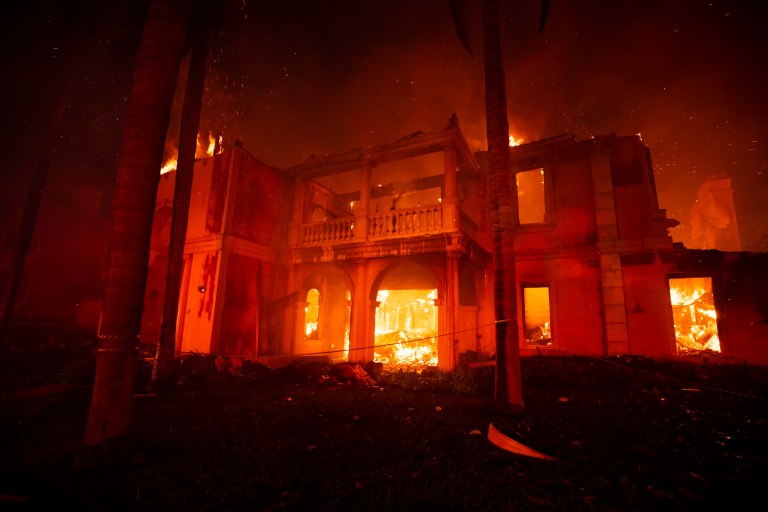 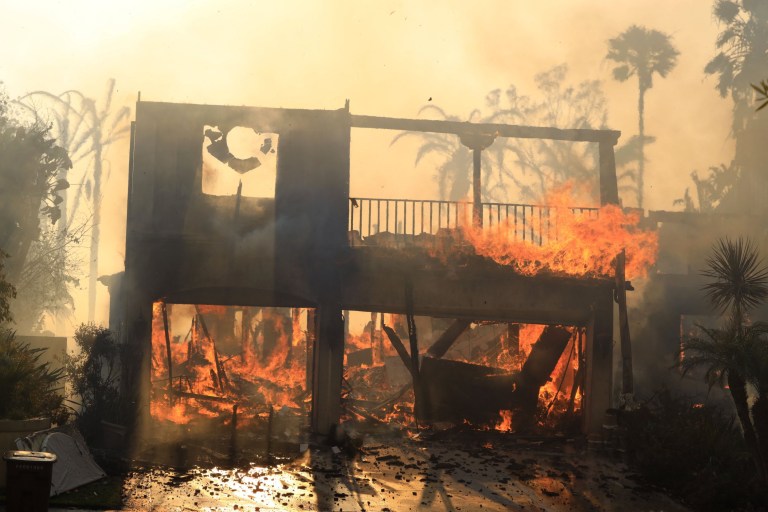 It prompted the evacuation of nearby residences and a luxury resort (Picture: Rex) 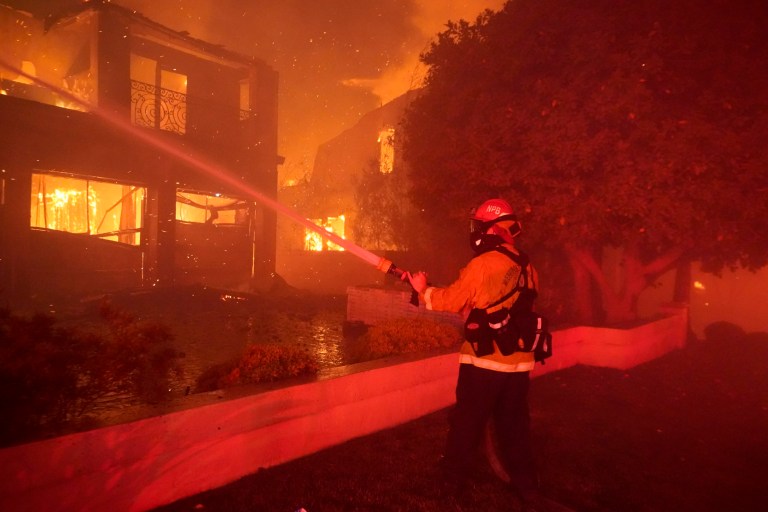 California is in the midst of a severe drought (Picture: AP)

‘We have the entire region focused on this fire right now to make sure we have every fire engine available in the area to put this fire out,’ said Orange County Supervisor Lisa Bartlett.

Residents near Moulton Meadows and Balbo Nyes were advised to be prepared to flee at a moment’s notice, but the evacuation warning was lifted before 10pm.

Laguna Beach high school has been evacuated. There were no reports of any injuries by 10pm.

Crews will be conducting damage assessments overnight and monitoring for hotspots or flying embers that could spark more flames. 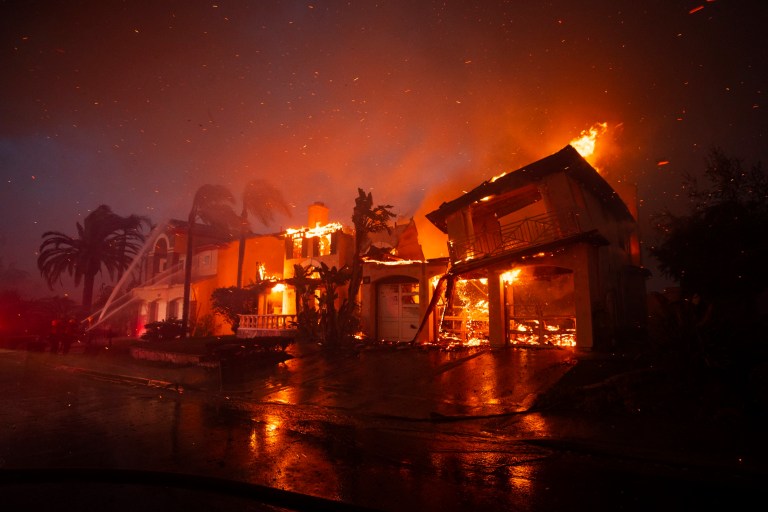 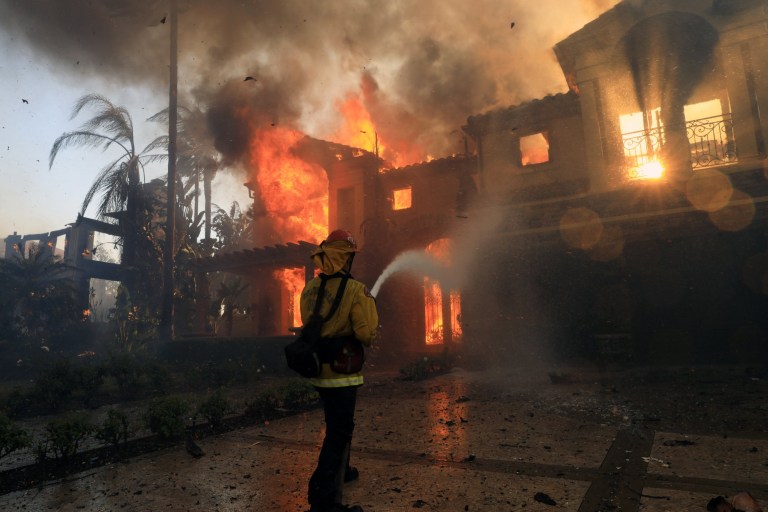 There have been no reports of injuries (Picture: Zuma Press) 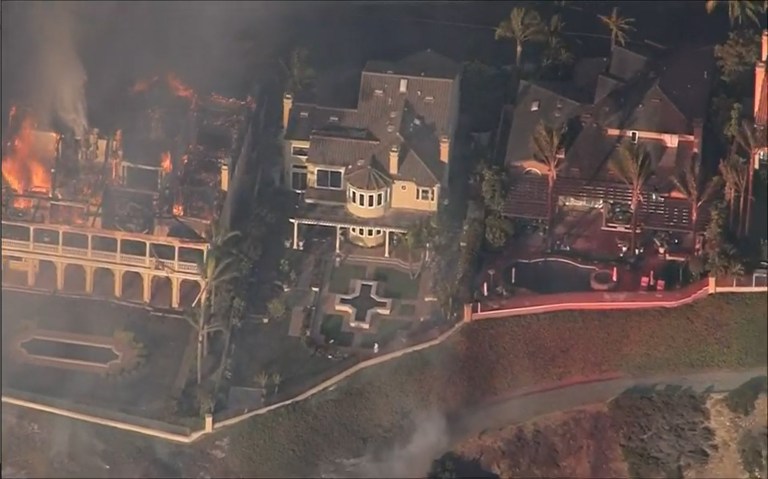 The fire is being made worse by dry conditions from an ongoing drought and coastal winds (Picture: KNBC/KVEA)

The fire is being made worse by dry conditions from an ongoing drought and coastal winds.

Brian Fennessy, fire chief of the Orange County Fire Authority, told a news conference: ‘The fuel beds in this county, throughout Southern California, throughout the West, are so dry that a fire like this is going to be more commonplace.’

He said over 60 different types of resources are battling the flames, but the fire is still raging. 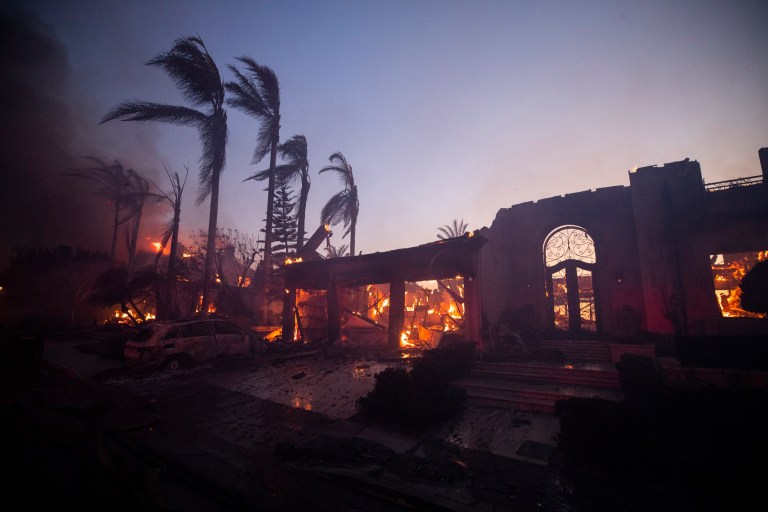 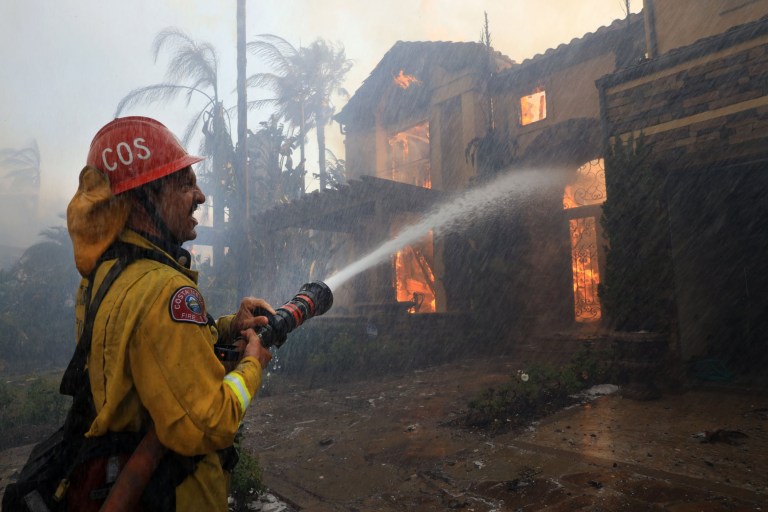 Firefighters struggled to put out the flames despite many resources (Picture: Zuma) 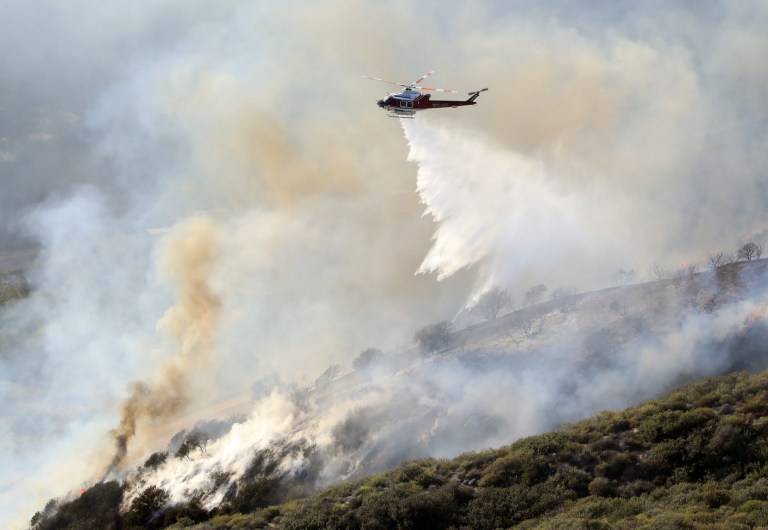 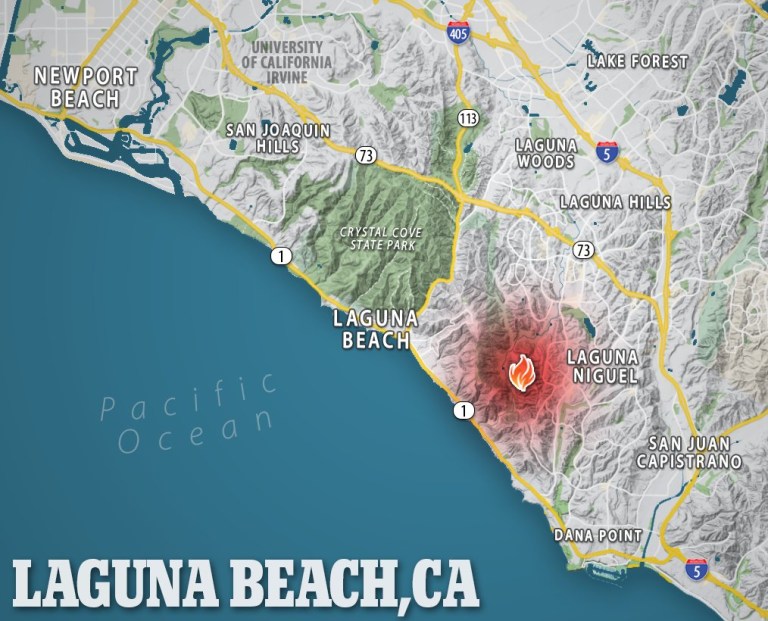 The fire tore through homes opposite California’s famous Laguna Beach

‘We’re seeing spread in ways that we haven’t before. Five years ago, ten years ago, a fire like that might have grown to an acre, couple acres, before it was under control’, Fennessy said.

But now, ‘fire is spreading in this very dry vegetation and taking off’.

California is experiencing severe drought conditions that have led to water restrictions in parts of the state.

There are fears the worst is yet to come with long-range forecasts predicting a summer that will be fraught with record-breaking temperatures and above-average potential for significant wildfires.

‘The dice are loaded for a lot of big fires across the West,’ climate scientists Park Williams told the LA times.

‘And the reason for that is simple: The vast majority of the western US is in pretty serious drought.’