Train strikes are set to cause further disruption across the country (Picture: Getty Images)

As anyone commuting will know, UK railways have faced major disruption in recent months due to a series of train strikes over a pay and jobs dispute with Network Rail.

And while the last lot of planned walkouts were cancelled as a mark of respect following the death of the Queen on September 8, these are now set to go ahead over the next couple of weekends, with the first taking place today – October 1.

Many, of course, will support workers’ right to strike – but millions also rely on the rail for transport, and for that reason might be wondering when the strike is due to end.

When will the train strike end?

The latest train strike – which will see RMT, Aslef and TSSA members walk out – will end at 23.59 on October 1.

While trains will start up again from 7am the following day, there is likely to be further disruption on Sunday morning while services return to normal. 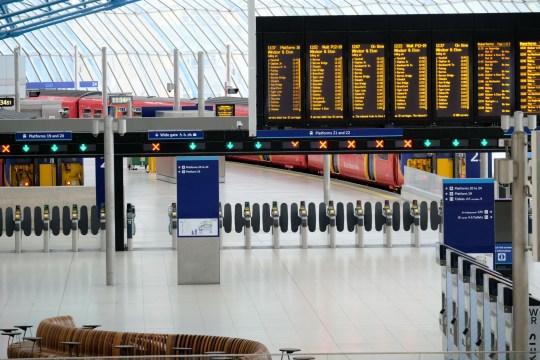 The strike will impact the following rail companies:

The London Underground is not involved in this strike, and Tube services will continue to run as normal, but could be more busy than usual, so make sure you allow plenty of time for your journey.

The Elizabeth Line will also run but Transport for London have warned there may be some disruption to the service. There will be no London Overground service from 4am onwards once the night service ends.

If you’re unsure whether your chosen railway company is taking part in this strike you should check their website for timetable information, as they will detail which trains aren’t running, affected lines and provide service updates.

When are the next train strikes?

Further strikes are planned for October 5 and 8 – with Aslef walking out on the 5th and the RMT Union on the 8th.

TSSA managers and office staff are also set to strike on Octobe 6 and 7 which is set to cause further disruption to some services across the country.