The trustees of cattle shelter homes have launched protest against the Gujarat government for not releasing the promised Rs 500 crore financial assistance. News18 Gujarati (Representational Image)

The trustees of cattle shelter homes reportedly released thousands of cows on roads in Gujarat, which led to traffic snarls on the north Gujarat highways on 24 September.

The charitable trusts running the cattle shelters have accused the Bhupendra Patel-led government of not releasing the promised funds for running the cowsheds.

Last week, the angry shelter owners released cows in public areas including several government offices to protest against the government.

On Thursday, thousands of cows were let out on the state and national highways along with government buildings in north Gujarat, reported IANS. The cattle could be seen running in the streets of Banaskantha and Patan in north Gujarat on Friday.

During last election of Gujarat BJP promised that they’ll allocate ₹ 500 cr funds for cows shelters and to take care of them.

But till now BJP didn’t give a single Penny.

As many as 1,750 cowsheds that house 4.5 lakh cattle joined the protest by Sunday, as per Indian Express.

Why are the trustees angry and why is the Gujarat government in soup?

Let’s examine the issue in detail:

Banaskantha panjrapole (cow shelter homes) trustee Kishor Dave said that they
were forced to release the cows on streets and government offices after their demand for the financial assistance promised in the state budget for year 2022-23 remained unheard, IANS reported.

He also said the trustees have been protesting for the last 15 days.

Several videos surfaced on social media showing cows running to office buildings of the sub-divisional magistrate and courts in Banaskantha, as per Indian Express. The police had to use lathis to disperse the herd of cows as well as erect barricades to stall their movement.

ALSO READ: Explained: Is it safe to consume milk from cattle infected by lumpy skin disease?

In Kutch, the trustees gave the keys of the cattle shelters to the government, threatening not to vote for the Bharatiya Janata Party (BJP) in the upcoming Gujarat Assembly elections slated later this year.

The organisations running these shelters told Indian Express that some of the cows have returned while many are still on the roads.

Traffic on the North #Gujarat highways came to halt after over 200 Panjrapole (cow shelter homes) trustees released thousands of #cows in protest against the state government’s failure to grant Rs 500 crore financial assistance for running the shelter homes. pic.twitter.com/zTno7fdEoN

The agitators also reportedly shared Chief Minister Bhupendra Patel’s speech at a rally held in March in Banaskantha’s Bhabhar, where he had said, “We are all gau bhakts. For gau mata, Rs 500 crore is allocated in the budget.”

Under the Gujarat government’s ‘Mukhyamantri Gau Mata Poshan Yojana’, Rs 30 has to be paid per cow and its offspring per day to the registered cow shelters.

As per IANS, Banaskantha district alone has 170 cattle shelters housing 80,000 cows. The trusts require Rs 60 to 70 per cattle per day to feed them, which has become a challenge as the donations have dipped post COVID-19.

The Gujarat Gau Seva Sangh, a union of cow shelters housing sick and old cattle, has claimed not a single rupee of the Rs 500 crore fund promised by the state government has been released.

The sangh has also warned of agitation spreading to other Gujarat districts if their demands are not met.

“We have already declared that we will boycott the BJP as well as the elections. If the state government fails to meet our demands by 30 September, we will launch a Gau Adhikar Yatra across the state,” Vipul Mali, the general secretary of the Gujarat Gau Seva Sangh, told Indian Express.

What is the government saying?

The protests have ruffled the feathers of the BJP-led Gujarat government as it comes ahead of the crucial state Assembly polls. 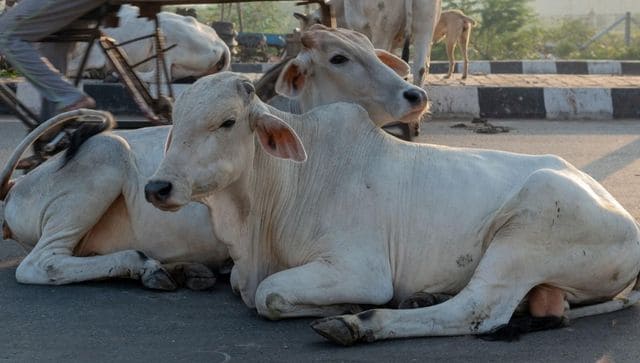 The cattle shelters have freed the cows into streets in Gujarat to protest against the government. AFP (Representational Image)

Minister of Agriculture, Animal Husbandry and Cow Breeding Raghavji Patel confessed the government is ‘concerned’ about the ongoing protest and said he has taken up the issue with BJP state president CR Paatil, reports Indian Express.

He also said the chief minister wants the issue to be resolved quickly.

Commenting on the delay in the release of financial assistance to cow shelters, Patel told Indian Express, “We had made the provision in the budget and also announced its implementation from 1 April, but due to administrative tangles, this could not be done. But as it is under consideration, there will be a positive solution in a day or two.”

The ongoing protest has increased the woes of the Gujarat government which earlier faced the ire of the maldhari (cattle-rearing) community over the now withdrawn Cattle Control Bill.

The cattle-rearing community had forewarned to launch statewide protests and halt milk supply to dairies if Gujarat Cattle Control (Keeping and Moving) in Urban Areas Bill, 2022, was not taken back, reports The Hindu.

The contentious bill aimed to prohibit stray cattle movement in urban areas. It also mandated cattle-rearers to get a licence to keep stray cows and bulls in cities and towns. The cattle were supposed to be tagged within 15 days or else the owner would be fined or imprisoned or both.

During the two-day Assembly session in Gandhinagar last week, the state government moved a proposal in the Gujarat Assembly to withdraw the bill, which was passed unanimously with support from the Opposition.