A BRIT family who were taken hostage by a Peruvian tribe armed with machetes have told how vital supplies were quickly running out.

Charlotte Wiltshire, 54, was one of the 70 tourists terrifying trapped on a boat with indigenous protestors for 24 hours. 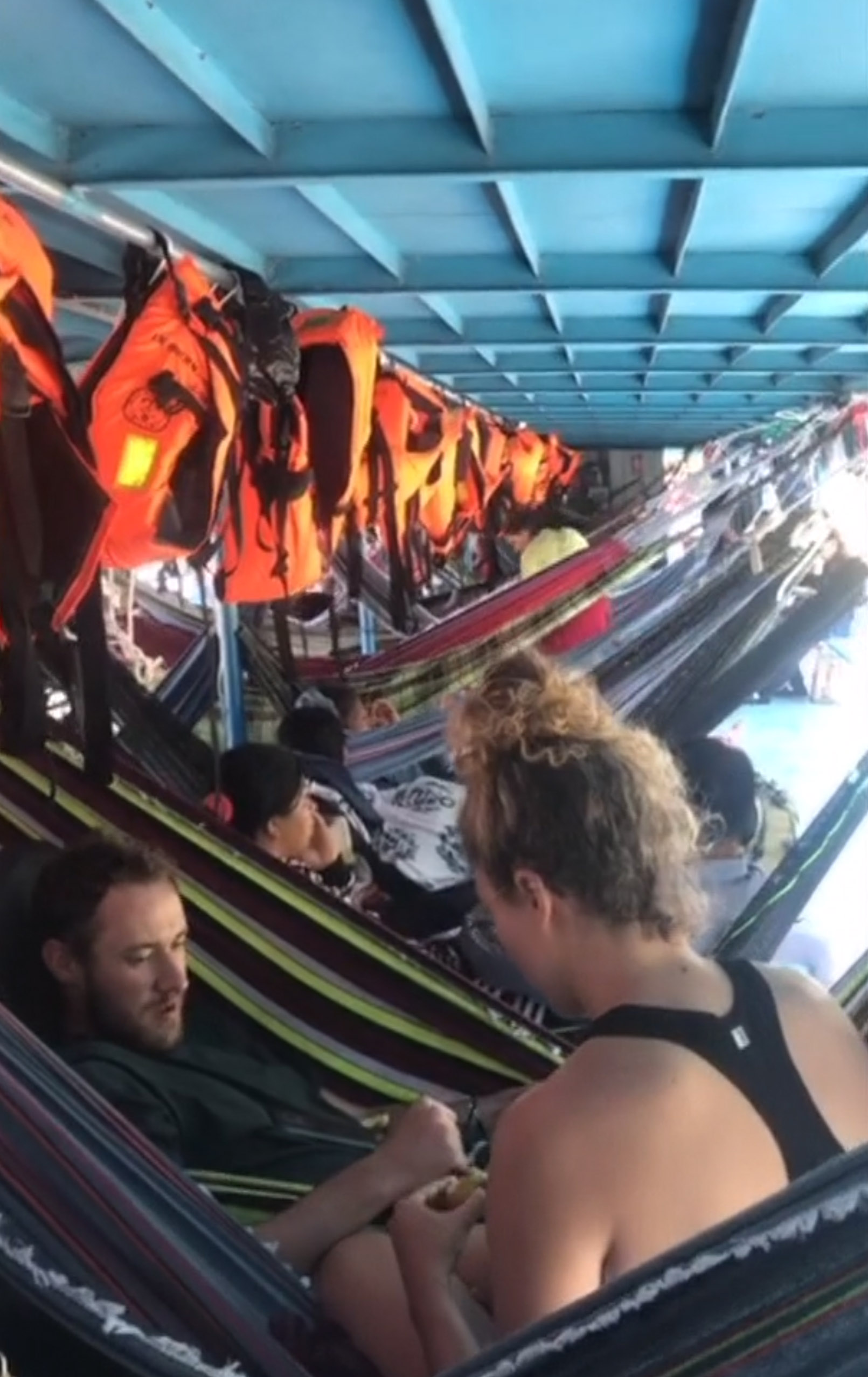 70 people were taken captive by the Cuninico tribe in protest over an oil spill in the AmazonCredit: Universal News & Sport 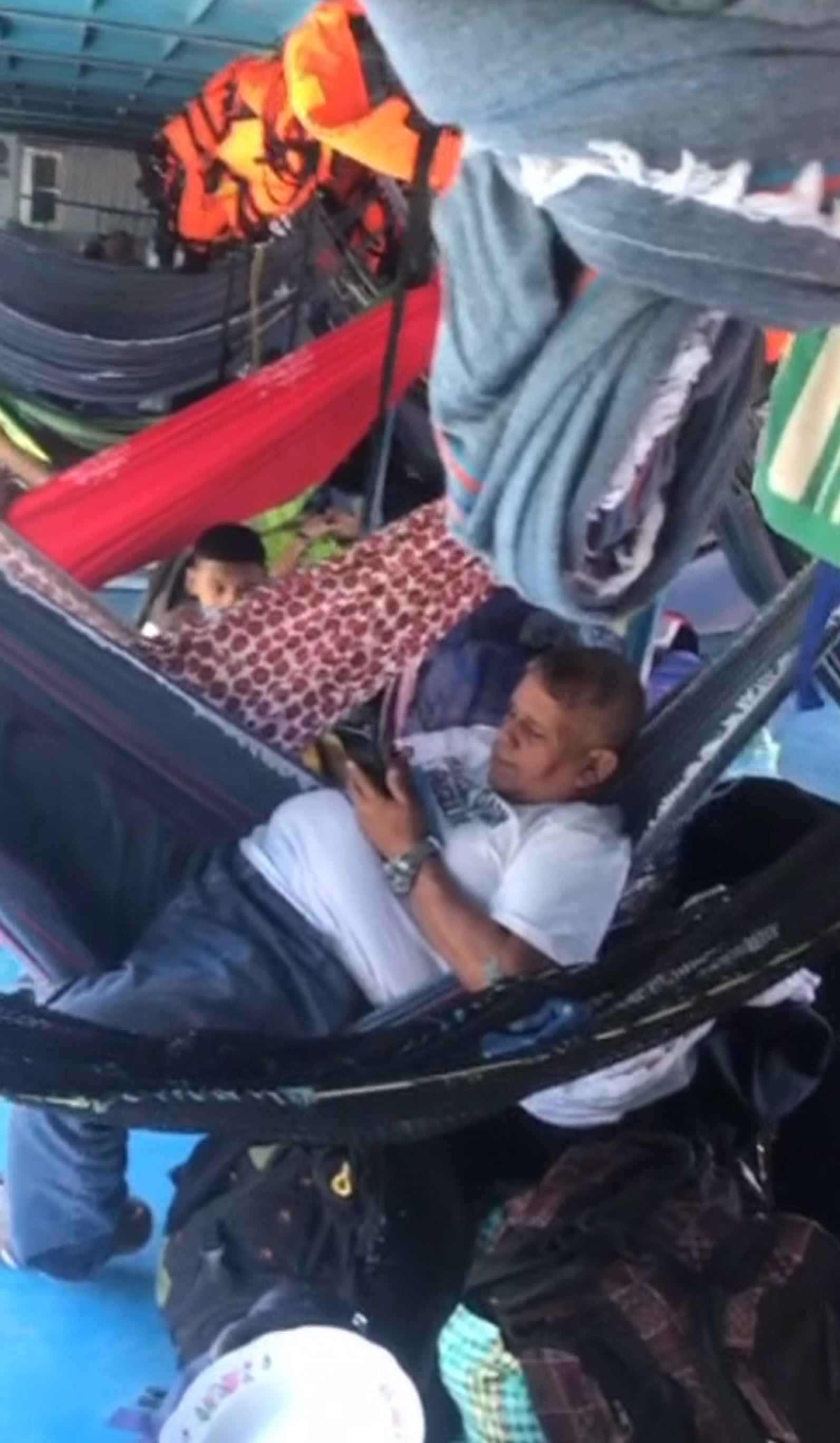 Pensioners, pregnant women, and children were crammed onboard the river boat for 24 hoursCredit: Universal News & Sport

She had embarked on the trip of a lifetime with her son Luke Bunker, 28 and partner Ken Wiltshire, 52, when they were taken captive.

Dozens of other travellers – including pregnant women, children, the elderly, and the disabled – were also apprehended as they tried to cross the Marañón river in northern Peru.

The local Cuninico tribe seized control of the river boat in protest of the Peruvian government’s lack of aid following a recent oil spill in the water.

Charlotte and her family were caught up in the chaos as they innocently tried to navigate their way through the Amazon. 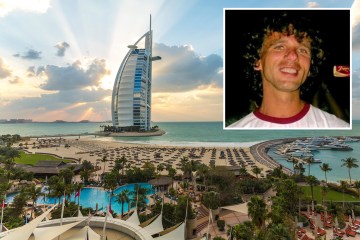 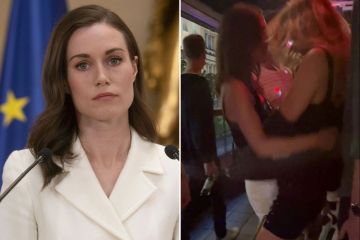 She explained they had decided they wanted to fully immerse themselves in the culture when they began backpacking through South America.

The trio wanted to travel like locals – so decided to make their journeys via sleeper boats with hammocks.

They were taken to the doomed vessel by a tour guide from their hostel in Taracota in the hopes of making their way to Yurimaguas.

The brood, from Cardigan, Wales, boarded the river boat at lunchtime on Wednesday – and were taken hostage less than a day later.

Livid locals surrounded the vessel “with sharpened stakes and machetes” before climbing onboard and seizing control.

Shaken up Charlotte told the Mirror: “They took the batteries from the boat. More and more people were arriving on the banks with machetes.”

Discussing her horror ordeal, the mum recalled how the hijackers began proclaiming their cause in Spanish – but she couldn’t understand.

Originally, the captors were told they would be held hostage for up to eight days – despite a diabetic, a one-year-old baby and pensioners being on board.

She said they were given 40 litres of water on Friday morning – but with 70 people onboard they knew “it won’t last very long.”

Speaking from the boat, Charlotte said: “It’s very hot, we have no power, no way of charging phones.

“When you have got people squashed into a very small amount of space you’re getting tense because everybody’s just getting fed up with the situation.”

More and more people were arriving on the banks with machetes.

As experienced travellers, Charlotte, Luke and Ken managed to keep their cool – but she admitted they have “never been in a situation like this before.”

She told how she even became a “temporary godmother” to a tot on board as the captives desperately tried to help each other “stay calm”.

But the level-headed retiree confessed her 24 hours in captivity had been a “grim” experience.

Charlotte had previously warned the world conditions were “starting to deteriorate” as her fate hung in the balance.

In a message to the BBC, she begged for an “intervention” to rescue the 70 hostages as they began to run out of food and water.

The group were incredibly freed on Friday following their hellish 24-hour ordeal and have now been transferred to another boat to continue their journey.

Watson Trujillo, the leader of the Cuninico community, announced the end of the hostage.

He told RPP Noticias: “The right and respect for life must prevail, in this context, we are going to provide the facilities so that the people who are on the boat can move to their destinations.”

The Foreign Office also confirmed the hostages had been released.

Trujillo earlier said his tribe had kidnapped the group because they wanted to “catch the government’s attention with this action”.

He added that “this drastic measure” had been taken in order to force the government to send a delegation to assess the environmental damage caused by the oil spill.

The leak, which took place on September 16, spilled approximately 2,500 tonnes of crude oil into the river.

One of the South American country’s largest pipelines, it was built four decades ago to transport crude oil 800km from the Amazon region to Piura, on the Pacific coast.

Peru’s government declared a 90-day state of emergency on September 27 for the affected area within the Cuninico and Urarinas communities, home to some 2,500 indigenous people.

Indigenous groups have been blocking the passage of any boats down the river since Thursday to protest the leak, which was caused by a rupture in the Norperuano (ONP) pipeline.

The state-owned Petroperú company, which controls the pipeline, has blamed the leak on sabotage to the pipe.

It claims that its workers discovered “an intentional tear of 21cm in the pipeline”.

Petroperú has reported 10 separate attacks on its pipelines in the Loreto region this year, all of which have caused oil spills. 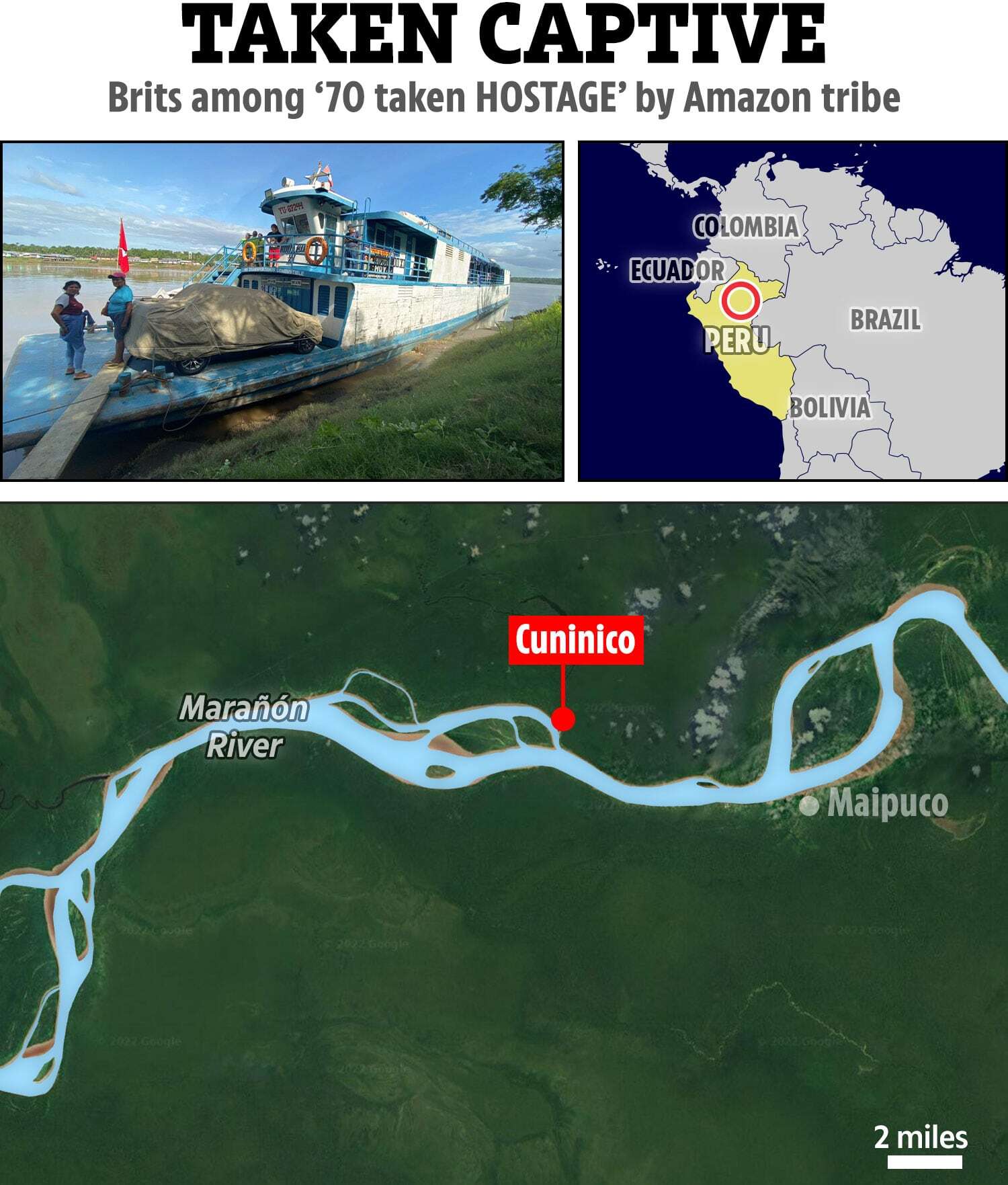 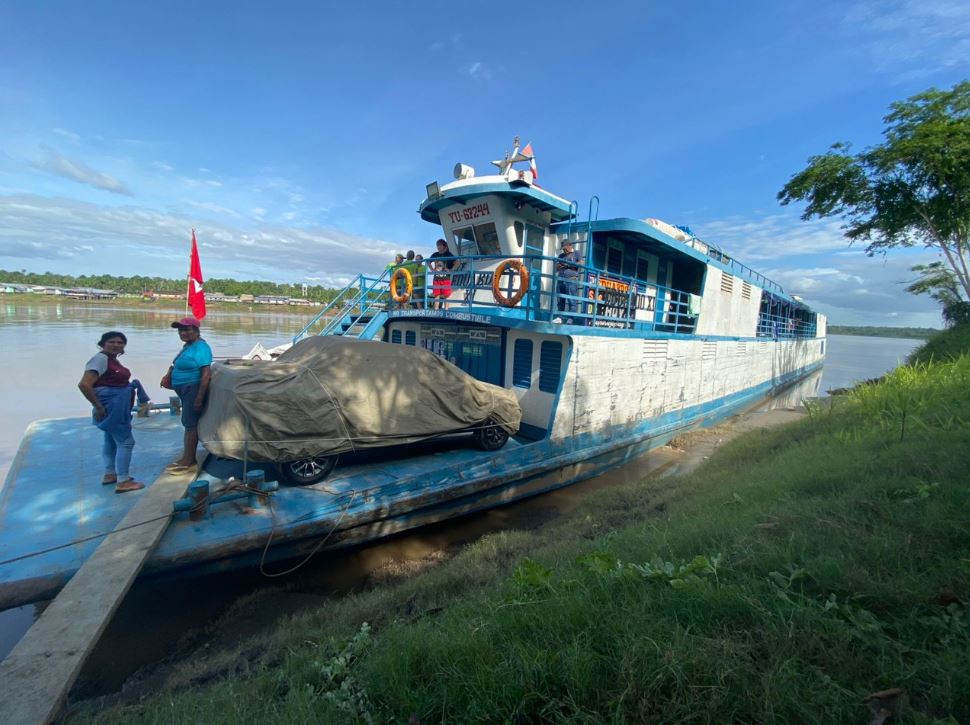 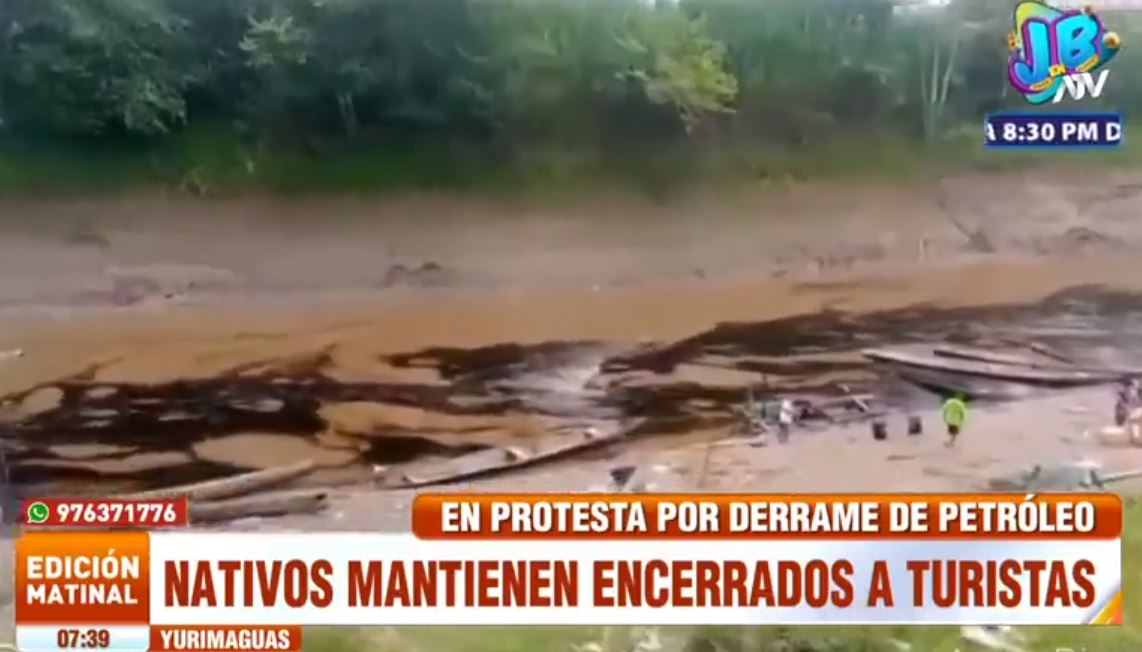