The letters cover the floor of her entire living room when spread out (Picture: SWNS)

A woman was shocked after she received more than 400 identical letters from her water company through the post — in one day.

Ella Tweed, 24, got home from a day at work to see an enormous pile of 440 envelopes on her doormat, each offering her new meter.

The body piercer has no idea how the blunder happened, but says the letters cover the floor of her entire living room when spread out.

The letters were from Severn Trent Water, but the water company said they had been organised by contract partners, Network Plus.

Ella from Rugby, in Warwickshire, doesn’t know what to do with the collection and still has them in her flat as she fears they’ll fill up her recycling bin.

She said: ‘I thought at first that it was a mistake and I was given everyone else’s letters, but they were all for me — every single one!

‘I genuinely couldn’t believe it — I opened a few of them and they were all the same, but I didn’t have the patience to open the other 400-odd.

‘God knows how many trees this took!

‘It was initially frustrating, but now I see it as quite comical.’

Ella found the letters bundled up by elastic bands on January 27.

After spreading them all across her floor, and opening several — she realised they were all the same letter telling her about a new water meter.

She said: ‘All they were doing was telling me they were going to be pro-active in changing my water meter — it wasn’t even specifically aimed at me.’

She said she has still not faced the task of getting rid of them all as she is not sure how — and they remain spread across the floor of her flat.

There are so many that the floor can’t be seen beneath them all.

She said: ‘It’s surprised me because they’re quite an environmentally friendly company, and god knows how many trees that killed. 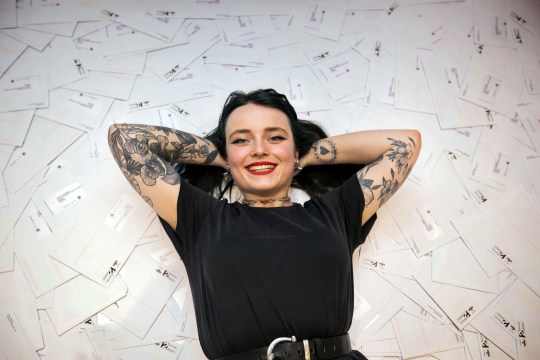 Ella Tweed, 24, found the situation ‘quite comical — after I got over the initial frustration of not knowing what to do with them all!’ (Picture: SWNS)

‘But it is quite comical — after I got over the initial frustration of not knowing what to do with them all!

‘When I told my mum she was as gobsmacked as me.

‘Well, at least I don’t need to mop the floor for a bit!’

Severn Trent Water was contacted for comment and said that the letters had been organised by contract partners, Network Plus.

Dave Trotter, executive director at Network Plus said: ‘We apologise to Ella for receiving so many letters.

‘We outsource our printing to a specialist company and it appears to be an administrative error with the IT systems.

‘We’ve taken steps to fix the problem with our supplier of these services so that it doesn’t happen again.

‘We’re particularly disappointed because we have been focussing recently on how the business can support carbon reduction and make a positive contribution to the local environment.

‘We have introduced a significant commitment to planting a whole forest through a partnership with Severn Trent — we will make sure we make amends for this error.’

It’s not the first time someone has been flooded with dozens of letters to their address recently – a dad was left fuming after a council accidentally sent 207 letters intended for different parents to just him.