Walkers have described their fear after spotting a mysterious figure lurking in the woods – until they realised it was a mannequin.

An ‘old man’ wearing a yellow rain coat and trilby hat has appeared among the trees near Bodelwyddan in north Wales, and no one knows why.

The figure is holding a suitcase, has long flowing black hair, a lifelike face and big round glasses.

In his hand is a bucket with the message ‘thank you’ written on it.

He can be seen by drivers passing on the nearby A55 and has given several a bit of a fright.

The ‘spooky’ character caught out one local resident, Janny Pan, who wrote on Facebook: ‘Has anyone else saw (sic) the man in the woods by Bodelwyddan in the yellow coat carrying a suitcase?

‘I first saw him two years ago as I was driving back to Towyn from the hospital. I had to drive past him twice, he wasn’t moving just standing.

‘I pulled up in my car, got out and stood looking at him, he still never moved, I got back in the car to phone police. 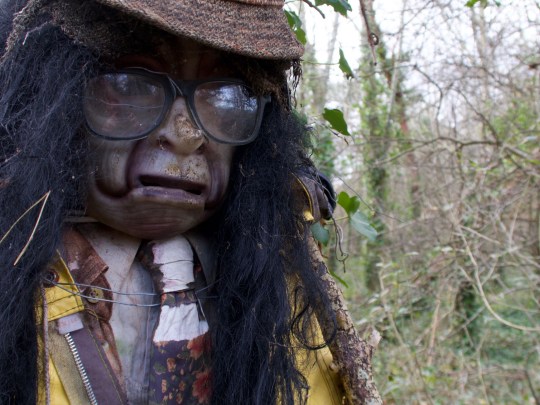 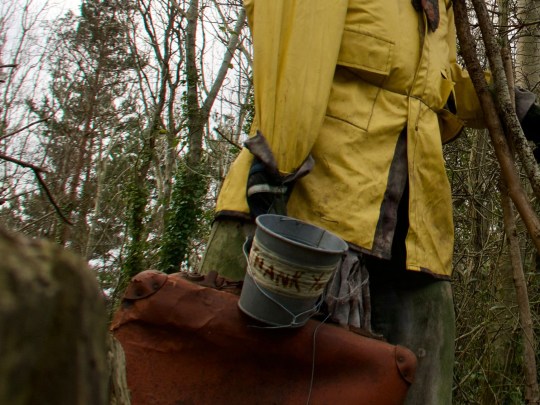 He held a tin in his hand with the words ‘thank you’ written on it (Picture: North Wales Live)

‘They said it’s OK we know about him. So I got out and walked slowly over to him through the trees, he just stood there.

‘My dog creeped towards him barking, when I got nearer I thought is he real? He looked like it.

‘His face was so real looking, I touched him, it was a bl**dy dummy.

‘I felt so stupid, bet the police were laughing at me. I even told my neighbours, they had to go and look – tell me if you was (sic) driving past and you saw him standing there would you go and look?’