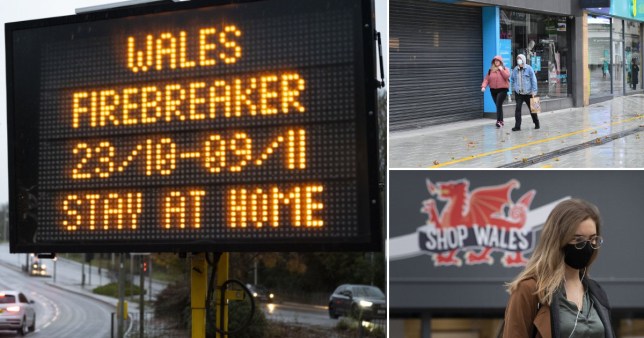 The Welsh Government is still planning to end its ‘firebreak’ lockdown on November 9 (Pictures: Getty/PA)

The Welsh Government is still planning to bring the country out of lockdown on November 9, despite neighbouring England being plunged into new restrictions.

Ministers are said to be planning to meet to discuss ‘any potential border issues’ as the four nations of the UK increasingly go it alone in their fight against the second wave of the virus.

Wales went into a two week ‘firebreak’ lockdown on October 23. It was intended as a ‘short, sharp shock’ to help bring down hospital admissions.

Scientists were advising England to do the same but the Government in Westminster refused to deviate from its three tiered regional system.

That came to an abrupt end this evening when Boris Johnson announced the whole country would be placed in a nationwide lockdown.

Pubs, restaurants and non essential shops are all closing from midnight on Thursday. It’s expected to last until at least December 2.

But the Welsh First Minister Mark Drakeford is adamant Wales will soon enjoy greater freedoms as planned and that Downing Street’s new rules only relate to England.

He tweeted on Saturday afternoon: ‘The Welsh firebreak will end on Monday, November 9. Our cabinet will meet tomorrow to discuss any potential border issues for Wales in light of any announcement by No 10.’ 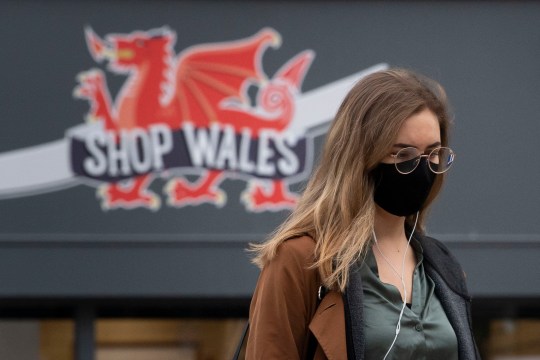 Wales is in the midst of a two week lockdown until November 9 (Picture: Getty)

In Scotland, where a five tiered system for combating the virus is set to come into effect on Monday, Nicola Sturgeon has said she will ‘carefully consider the impact of today’s announcement.’

Northern Ireland is currently nearing the end of a two week ‘circuit breaker’ lockdown and the administration in Stormont is expected to review the restrictions early next week.

Mr Drakeford’s comments came as confirmed cases of coronavirus in Wales surpassed 50,000 after another 1,301 people tested positive. There were also 13 deaths announced today.

Under the firebreak regulations, people who live outside Wales must not enter or remain in the country without a reasonable excuse. 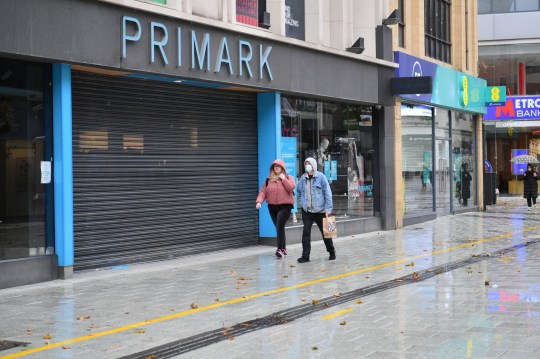 On Friday, Mr Drakeford confirmed a ‘simpler’ set of national coronavirus restrictions would be adopted across Wales when the lockdown ends.

Shops, bars, restaurants and gyms will reopen on November 9 when the national measures come into force, with pupils returning to schools, and churches and places of worship resuming services.

But a travel ban preventing people in areas of the UK with high levels of coronavirus from entering Wales could be included in the restrictions if incidence rates in England go on being much higher.

Mr Drakeford told a press conference on Friday: ‘If that remains the same, then we will expect to have a similar regime after November 9 as we had prior to October 23 because it just doesn’t make sense to add to the difficulties we already face by the virus being imported from elsewhere.’ 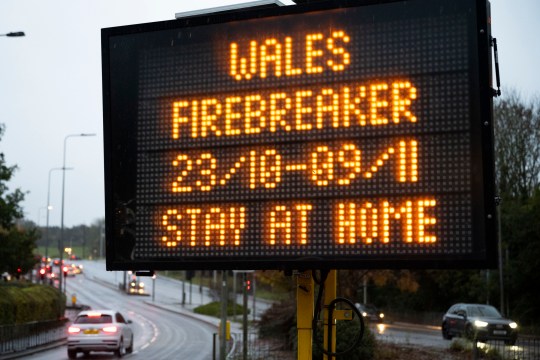 Many said England should have been locked down at the same time as Wales (Picture: Getty)

Mr Drakeford said 1,191 people are in hospital with coronavirus-related symptoms, 20% more than at the same point last week – and the highest amount since the end of April.

Under the firebreak rules in Wales, people can only leave their home for limited reasons such as to buy food and medicine, provide care or take exercise, and must work from home where possible.

Leisure, hospitality and tourism businesses are closed, along with community centres, libraries and recycling centres, while places of worship are shut other than for funerals or wedding ceremonies.

Non-essential items must not be sold in shops such as supermarkets that are allowed to remain open during the 17-day period, though customers can ask to buy such products by exception.

Mr Johnson has been criticised for not introducing a full lockdown earlier. It’s now expected England will have to be shut down for longer, because of the delay.