CARACAS, Venezuela—President Nicolas Maduro’s authoritarian government seized the headquarters of one of the country’s last remaining independent newspapers, in a move that could jeopardize the regime’s efforts to improve relations with Washington.

A judge accompanied by Venezuelan national guardsmen clad in bulletproof vests and maroon berets raided the 162,000-square-foot property of El Nacional late Friday in an industrial part of eastern Caracas. They acted on a Supreme Court order to take the property as part of a $13 million judgment against the media outlet.

The headquarters was already largely vacant as workers have been contributing from home amid the pandemic, and the paper has been an exclusively online publication since 2018. It ceased its print edition after the government, which held a monopoly on imports, cut the company’s access to imported newsprint. The paper’s website, too, has been restricted by Venezuela’s telecommunications regulator on numerous occasions since then.

But the paper’s seizure could have greater implications for the Maduro regime’s attempts to turn a new page with the Biden administration. Under former President

the U.S. levied a rash of sanctions against the government and top Maduro confidants for alleged human-rights violations, election fraud and corruption. The punitive actions failed to unseat Mr. Maduro but have cut the country off from its traditional oil partners and pummeled an economy that was once Latin America’s richest. 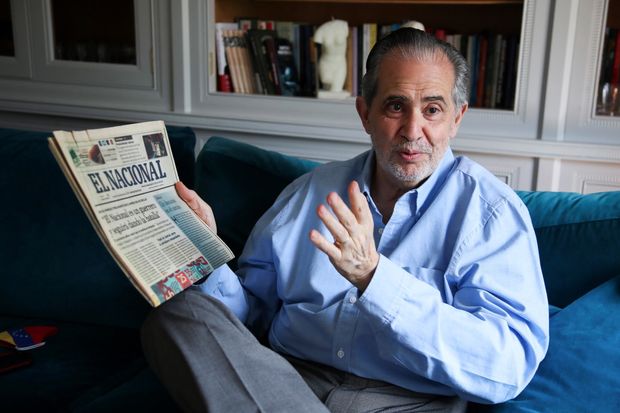 
Human-rights and press-advocacy groups called the ruling the latest action meant to quash critical media in a country where dissidents have faced jail and intimidation and have been forced to flee.

a top honcho in Venezuela’s ruling Socialist Party who had filed the civil defamation suit against the media outlet, has said that he wants to convert the publication’s headquarters into a pro-regime communications school.

“The plundering of a major newspaper, utilizing judges for personal gain, the disregard for due process, it’s the proof that we are facing a terrible dictatorship,” Mr. Otero said in a phone interview from exile in Spain.

Founded in 1943 by Mr. Otero’s grandfather, El Nacional has been among the South American nation’s most prominent media companies, riding through the military dictatorship of Marcos Perez Jimenez in the 1950s and becoming a beacon of the democracy that survived him. Its reporting on graft and power abuses had made it a thorn in the side of the late leader

Under Mr. Maduro, investor groups tied to the regime bought out another major newspaper and TV channel and turned them into pro-government outlets, which had made El Nacional an even lonelier voice.

In recent weeks, Mr. Maduro’s government had offered signs that it wanted to ease tensions with Washington. It moved six detained executives of Citgo from jail to house arrest in Caracas and permitted two political opponents to sit on the five-person National Electoral Board, which has been accused of rigging votes in the ruling party’s favor.

James Story, U.S. ambassador to Venezuela, late Friday suggested that the takeover of El Nacional was a step backward. The action “isn’t against a building or its installation, but rather against freedom of the press,” Mr. Story said in a

post. “There cannot be free and fair elections in Venezuela without liberty of expression.”

The case against El Nacional stems from 2015 when the paper republished news articles from The Wall Street Journal and Spain’s ABC indicating that U.S. prosecutors were investigating Mr. Cabello for alleged money laundering and ties to cocaine-trafficking organizations. The reporting was partly based on the testimony of Leamsy Salazar, a former bodyguard for Mr. Cabello. He flipped on the regime and fled to the U.S., where he told prosecutors that he had witnessed the prominent politician’s interactions with narcotics traffickers.

Mr. Cabello denies the allegations, calling them a smear effort. In 2018, a federal judge in Manhattan dismissed a libel suit that Mr. Cabello had filed against Dow Jones & Co., the Journal’s publisher, ruling that he failed to show that the article contained falsehoods about him. But courts in Venezuela last month ordered El Nacional to pay Mr. Cabello for “serious moral damage” caused by the reports.

Mr. Cabello on Friday night celebrated the injunction against El Nacional, posting a photo of the court order on his Twitter feed. “We are going to win,” he said in the post.

The El Nacional building covers a little more than half of the $13 million judgment. Managers of the publication who remain in the country said they were concerned that the regime could take further actions against workers and company property.

“This is a vile abuse of power,” Jorge Makriniotis, who serves as general manager while the Otero family remains in exile, said. “But we want to be clear…this attack isn’t going to break our editorial line, which will always be critical to the sitting government.”