The move has been initiated to expedite the process of disbursing compensation among the kin of the survivors and victims, said state’s health secretary 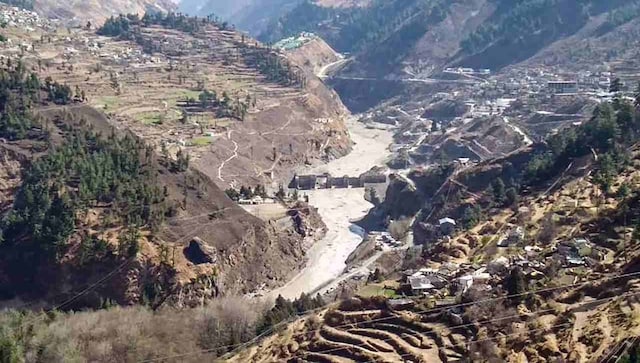 Damaged dam of the Rishi Ganga Power Project, after a glacier broke off in Joshimath in Uttarakhand’s Chamoli district causing a massive flood in the Dhauli Ganga river on 7 Febraury 2021. File Image. PTI

Dehradun: The Uttarakhand government has issued a notification authorising officials to declare “presumed dead” 136 people still missing after the flash flood in Chamoli district over two weeks ago.

Sixty-eight bodies have so far been recovered after the 7 February disaster possibly triggered by an avalanche.

A devastating flash flood demolished a 13.2 MW hydel project along the river besides causing extensive damage to the NTPC’s Tapovan-Vishnugad hydel project along Dhauliganga. About 35 people were feared trapped inside a tunnel in Tapovan. The debris and sludge has only been removed from a portion of the tunnel.

Uttarakhand Health Secretary Amit Singh Negi said on Tuesday that the presumption of death can be made by officials in the affected district only in case of missing people, who in all likelihood have died in the disaster but their bodies have not been found.

Normally the missing are declared dead only when they are not traced for seven years after the incident responsible for their disappearance but in case of an extraordinary occurrence like the one witnessed in Uttarakhand special provisions can be made, he said.

The move to declare those who continue to be missing in the flash flood as presumed dead has been initiated to expedite the process of distribution of compensation among the affected families, he said.

The SOP was formulated on the request of the state government by the Registrar General and Census Commissioner, India, he said. In normal circumstances, the death is registered only on the reports from persons mentioned in section 8 of the Registration of Births and Deaths (RBD) Act, 1969.

However, in extraordinary cases like the one in Uttarakhand, reports from public servants after due enquiry can be made use of for registering the deaths,the notification said.

As regards people whose body has been found, it is needless to state that the normal process of issuing death certificates should be followed, Negi said.

In case of missing persons, who in all likelihood have died but the body is not traceable, all reasonable efforts should be made to determine that the person has in all likelihood died in the natural calamity, the official said.

According to the notification, the missing have to be divided into three categories — permanent residents present in the affected areas during the catastrophe, residents of other districts of Uttarakhand who happened to be in affected areas and tourists/persons from other states who were present there at the time of the catastrophe.

The notification also gives details of the process of enquiry to be followed in case of those missing in the three categories.

The designated officer should conduct a detailed enquiry regarding the missing person. Based on the enquiry, the officer should issue a speaking order regarding the provisional presumption of death. He should then ensure publication of the list of missing persons provisionally presumed dead in the newspaper, government gazette in Hindi and English and also host the same on the government website for the purpose of obtaining Claims and Objections.

Claims and Objections should be received within 30 days failing which the designated officer should issue the death certificate and make it available for free to the next of kin of the missing.