US Presidential Debate 2020 LIVE Updates: Accusing the the president of cozying up to a ‘thug’, Joe Biden said that Trump legitimised North Korea by meeting with Kim Jong-un 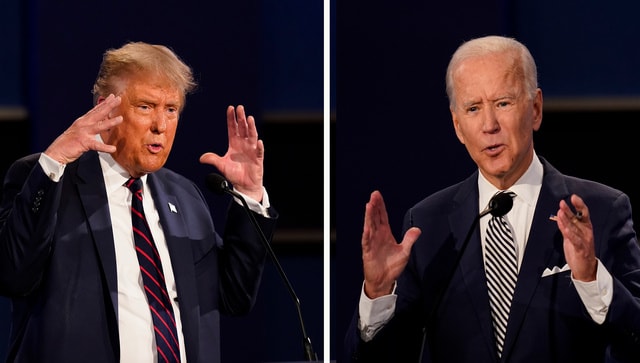 US Presidential Debate 2020 LATEST Updates: Accusing the the president of cozying up to a “thug”, Joe Biden said that Trump legitimised North Korea by meeting with Kim Jong-un.

Democratic presidential nominee Joe Biden opened the final general election debate on Friday by arguing President Donald Trump’s handling of the coronavirus pandemic in the United States should guarantee he is voted out of office in November.

US president Donald Trump and Democratic challenger Joe Biden will have their third and final round of debate on Friday (23 October), ahead of the upcoming 3 November election.

US Presidential Debate 2020 date and timing

The debate between Trump and Biden will begin at 6.30 am IST and run for 90 minutes.

All about the debate

Trump will face his rival at Belmont University in Nashville, Tennessee and the candidates are expected to attract millions of viewership during their 90-minute verbal encounter.

The presidential debate is being moderated by Kristen Welker, an NBC News White House correspondent.

The first debate, held three weeks ago, devolved  into rancour due to constant interruptions by Trump.

The Commission on Presidential Debates subsequently tweaked the format so that candidates’ microphones are turned off while their opponent is speaking for the opening two minutes during each of the six-issue segments.

Earlier, Trump had refused to participate in the second event on 15 October after it was announced that the debate would be held virtually in light of his positive COVID-19 diagnosis.

The Los Angeles Times reported that the six topics being covered in the event include the fight against COVID-19, American families, race in America, climate change, national security and leadership.

Over 1.4 lakh Indians have died due to disasters over the past 50 years: Study- Technology News, Firstpost

6 Dr. Seuss Books Will No Longer Be Published Over Offensive Images