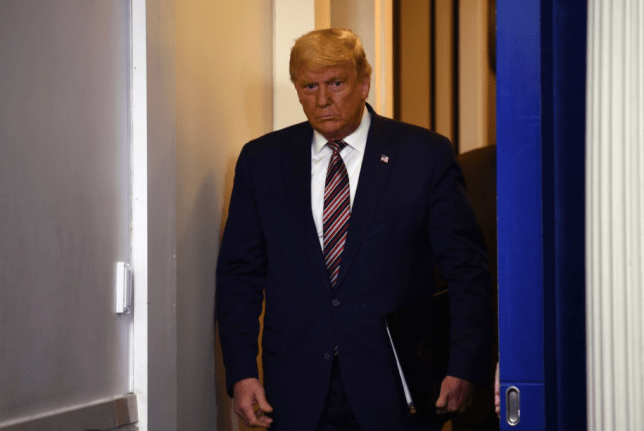 Donald Trump has blamed a burst pipe for helping Joe Biden narrow his lead in Georgia’s electoral count. The President of the United States told a White House press conference Thursday: ‘In Georgia a pipe burst in a faraway location totally unrelated to the location of what was happening, and they stopped counting for four hour, and a lot of things happened.

‘The election apparatus in Georgia is run by Democrats…also had margins of 300,000.’ Trump is now leading Joe Biden by less than 4,000 votes in Georgia, a traditionally Republican state. Politico reported that a pipe burst in a counting room in Fulton County – which covers Atlanta – on Tuesday.

It delayed the count by four hours, but did not damage any ballots, according to the Atlanta Journal Constitution.

President Trump also told Thursday’s press conference that he ‘easily wins’ the election if ‘legal’ votes are counted, and illegal ballots discarded. Trump went on to make unfounded claims that ‘secret counting rooms’ were being used to add to Joe Biden’s total.

And he complained his supporters had to use binoculars to try and observe counts, amid a legal wrangle which has seen his campaign team sue for the right to watch ballots being counted.

Independent vote watchers say there has been no evidence of electoral fraud during this year’s election.

The Associated Press say Joe Biden has got a total of 264 electoral college votes, with 270 needed to win the race, and have Trump on 214 votes.

Other outlets have not yet awarded Arizona to Biden, putting him on 214 votes. Nevada, North Carolina, Georgia and Pennsylvania have still not declared their results, with Trump still able to catch up if he wins them.

Trump has mounted legal challenges in multiple states amid claims of fraud, although judges in Georgia and Michigan – which Biden won – have already dismissed cases put before them.

Follow our US election live blog for the latest news and updates on the 2020 election.

Who is currently leading and what happens if neither candidate gets 270 votes? Find out here: