ISTANBUL—An international agreement to restore Ukraine’s Black Sea grain exports is showing early progress, with 18 ships moving to and from ports in Odessa nearly six months after Russia’s invasion bottled up a chunk of the world’s agricultural products.

On Saturday, the grain initiative passed a key milestone when the first inbound ship to arrive in Ukraine under the agreement safely departed Odessa after loading 12,000 tons of corn bound for Turkey. Before the ship’s departure, all of the other outbound ships leaving Odessa had been vessels that were stranded in Ukraine when Russia attacked in February.

The ships’ departure has proved the agreement can work and provided hope for further food exports from Ukraine, which supplied about 10% of the world’s wheat before the war. The country’s inability to sell its grain has hurt its wartime economy and raised fears of a global food crisis in poor countries.

But the future of the deal remains uncertain. Russian missiles struck the Port of Odessa hours after officials signed the agreement in late July, highlighting the risk that the war could still disrupt vital grain shipments.

Ukrainian exports accounted for a significant portion of the world’s wheat before the war began.


“It is right now a viable plan,” said Anna Nagurney, co-chairwoman of the board of directors at the Kyiv School of Economics and a department chairwoman in the Isenberg School of Management at the University of Massachusetts Amherst. “The momentum has begun. It has to continue and the pace has to increase.”

Officials from Ukraine, Russia, Turkey and the United Nations signed the grain agreement in Istanbul on July 22 following months of diplomacy brokered by the U.N. and Turkish President Recep Tayyip Erdogan.

U.N. Secretary-General António Guterres pushed for the agreement in hopes of alleviating a global hunger crisis caused by the Covid-19 pandemic, rising global energy prices and the Russian invasion of Ukraine, which trapped millions of tons of grain in the country. Ukraine was a crucial supplier to countries in the Middle East, Africa and Asia where the food crisis has been most severe.

Both Ukraine and Russia are to refrain from attacking ships or the three ports covered by the agreement. Ukrainian pilots are helping guide ships through Russian and Ukrainian mines while a team of inspectors from both countries along with Turkey and the U.N. search each of the vessels when they enter and exit the Black Sea through the Bosporus. Ukraine’s summer harvest is too big for export routes other than the Black Sea to handle, officials say.

Ships carrying some 438,331 metric tons of corn, wheat, soybeans, sunflower oil and other products have left Ukraine since the signing of the agreement, according to the U.N.

The 18 ships that sailed under the initiative this month are nowhere near a goal of about 100 ships a month set by the Ukrainian government. U.N. officials say the aim is for Ukraine to resume its prewar level of exports of five million metric tons of grain a month. Officials say they are still accelerating shipments to restore a prewar level.

Ukraine has also been ramping up its deliveries of grain via other means including rail and smaller ships leaving the Danube River, exporting 2.7 million tons in July, according to the country’s agriculture ministry. Ukrainian officials say those routes don’t have the capacity to handle Ukraine’s incoming summer harvest of tens of millions of tons of wheat and other products.

The current challenge, U.N. officials say, is clearing a backlog of ships that were stranded in Ukraine when Russia launched its full-scale assault on the country. In early August the U.N. had information on 37 vessels stranded in the three Ukrainian ports covered by the agreement. Of those, 27 were bulk carriers, capable of carrying foodstuffs, officials said.

As a result, most of the ships that have departed Ukraine have been destined for wealthier nations including Italy, Ireland, the U.K., China, and Turkey. Once the backlog is cleared, priority will be given to shipments to poorer countries.

“We’re dealing with three ports that were essentially frozen in time on Feb. 24,” the date of the Russian invasion, said Frederick J. Kenney, a retired American rear admiral who served as interim coordinator for the U.N. at the Istanbul control center for the deal.

Mr. Kenney said Wednesday that the inspection teams and the coordination center were increasing the number of ships they handled each day. The U.N. has received “dozens and dozens of phone calls” from private-sector companies asking when they could send ships to Ukraine, he said.

The first ship set to load a humanitarian cargo of wheat for the World Food Program arrived in Ukraine on Thursday, Ukrainian officials said. The vessel, called the Brave Commander, will carry wheat to Djibouti before the cargo is sent on to neighboring Ethiopia, a U.N. spokesman said. 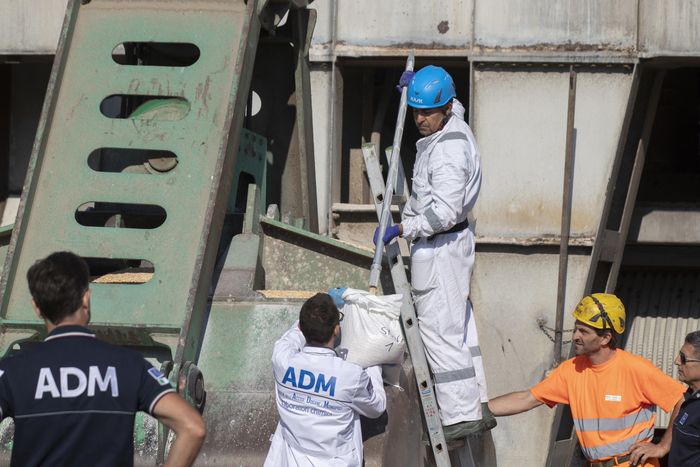 The Rojen made it to Ravenna, Italy, after a weeklong journey from Ukraine.

In a twist, the first ship to depart Ukraine under the agreement turned back before delivering its cargo of corn to Lebanon after both buyer and seller mutually agreed to call off the transaction this week, the Ukrainian embassy in Beirut said. The ship, the Razoni, found a new buyer and later sailed to Turkey, the embassy said.

The incident highlighted the risks involved in the export agreement. Grain traders say they are still assessing whether they can properly insure vessels to make the run to Odessa.

“We’re still in that gray area where nobody is sure of anything concrete,” said Jonathan Grange, a partner at Sunstone Brokers, an agricultural-commodities brokerage working in Ukraine and the Black Sea region.

“Full responsibility for the further functioning of the ‘grain corridor’ rests with Russia. If it holds on to its obligations, Ukrainian food exports will continue to guarantee stability for our Middle Eastern, African and Asian friends,” said Ukraine’s Foreign Minister Dmytro Kuleba this week.

The Kremlin has said it still supports the agreement, and Russian officials have called for the implementation of a separate aspect of the deal that seeks the export of Russian food products. The Turkey-bound Fulmar S was the first ship to sail both to and from Ukraine since the grain deal came into effect.