KYIV, Ukraine—Ukraine’s military intelligence chief said the country would keep fighting until it evicts Russian forces from all of its territory—including Crimea and other areas effectively seized by Moscow in 2014—and called for deliveries of longer-range heavy weapons and warplanes from the West to help.

said, referring to the year of Ukraine’s independence from the Soviet Union. “Who can force Ukraine to freeze the conflict? This is a war of all Ukrainians, and if someone in the world thinks that they can dictate to Ukraine the conditions under which it can or cannot defend itself, then they are seriously mistaken.”

In an interview in his Kyiv office, Gen. Budanov, one of the architects of the country’s war effort, said that to speed its counteroffensive Ukraine urgently needs medium- and long-range missile systems, large-caliber artillery and strike aircraft to offset Russian advantages in manpower and equipment.

“We have already begun an offensive in certain points, but a large-scale offensive without these weapons will be very difficult,” the general said.

With peace negotiations between Moscow and Kyiv stalled, Ukrainian forces have been pushing Russian forces back in the northeastern region of Kharkiv, reclaiming a string of villages in recent days. In the coming months, Gen. Budanov said, the military would shift its focus to driving Russia from areas it has occupied in the country’s south as well as the eastern Donbas region.

The U.S. Congress approved on Thursday an additional $6 billion in direct military aid to Ukraine and $8.8 billion in economic assistance to the Ukrainian government. Washington in recent weeks has delivered about 90 M777 howitzers, the first major shipment of North Atlantic Treaty Organization-standard heavy weapons. Another 18 are on the way.

A Ukrainian soldier climbs on a tank in the eastern Donbas region.


The Biden administration, however, so far has been reluctant to approve Ukrainian requests for other, longer-range, weapons, such as the Himars multiple-launch rocket system, in part because of worries that shipments of such weapons could prompt an escalation by Moscow.

Gen. Budanov dismissed those concerns. “We are waging a war on our own territory. If someone thinks we must have restrictions on using some types of weapons, I would like to remind them that Russia here uses absolutely all the types of weapons in its possession, from cruise missiles launched by submarines to strategic bombers. The entire spectrum of Russian arms has been employed here, except nuclear weapons, so far,” he said.

In the current phase of the war, after Russia retreated from Kyiv and other parts of northern Ukraine to focus on seizing Donbas, Moscow has arrayed 93 battalion-tactical groups with around 141,500 troops, Gen. Budanov estimated. Those numbers include fighters from the so-called Donetsk and Luhansk people’s republics that Moscow carved out of Donbas in 2014.

Russia is persevering in its war in Ukraine despite setbacks, sanctions and condemnation from many countries. WSJ’s Ann Simmons explains why deep cultural and political ties, its strategic location and potential resources have made the former Soviet Republic a target for Moscow. Photo composite: Eve Hartley

Russia has made slow but steady gains in Donbas in recent days, particularly near the town of Popasna in the Luhansk region. “Somewhere they will succeed and somewhere they will fail, but it doesn’t matter at all because Russia will lose in the end and Ukraine will recover all its temporarily lost territories. It will do so by force, exclusively by force, because no other way exists,” he said.

Gen. Budanov, 36 years old, spoke in the headquarters of the GUR, as Ukraine’s military intelligence directorate is known. A book on the Israeli intelligence agency Mossad, a combat patch with the letter Z that he said had been taken from a dead Russian soldier, and a map of the Snake Island, where Ukraine has repeatedly attacked Russian positions and vessels in recent weeks, were among the items on his desk. A painting behind him depicted an owl—a symbol of Ukrainian intelligence—hunting a bat, the symbol of Russia’s GRU military intelligence agency. 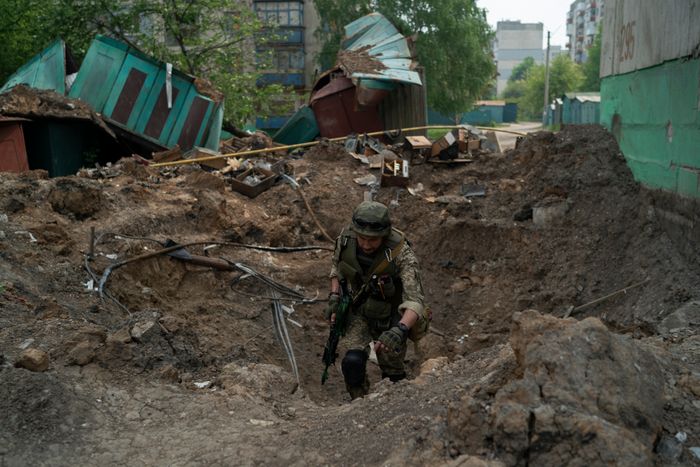 A special task force police officer inspects a site after an airstrike by Russian forces in Lysychansk, eastern Ukraine.

and other senior Russian leaders, Gen. Budanov said. He said U.S. intelligence shared detailed information about Russia’s invasion plans with Kyiv before the war began, and said Ukraine also had detailed access to deliberations in Moscow through its own sources. “We had all of their plans,” he said.

The general said he believes Russia has the wherewithal to keep fighting at least until the end of the year. But he said the war was already a strategic defeat for Russia and its leader, Mr. Putin.

“Putin is in an absolute dead end. He cannot stop the war and he cannot win it. He cannot win for objective reasons. And to stop it, he must acknowledge that Russia is not at all the kind of strong and great state that he wanted to portray,” Gen. Budanov said.

Mr. Putin, he said, faces a threat from within Russia once his inability to conquer Ukraine becomes obvious: “If they finally realize that the czar is not as great and mighty as he pretends to be, it’s a step toward the destruction of the statehood of today’s Russia.”

The GUR operates its own combat and special-operations units in addition to gathering and analyzing information through spies and electronic means. It is working closely with the intelligence community in the U.S. and other partners that help Ukraine repel the Russian invasion.

With an estimated 40% of Russia’s top military and intelligence commanders hailing from Ukraine, Moscow doesn’t lack expertise on Ukraine’s government, military and society, Gen. Budanov said. And yet, according to the GUR’s reporting, he said, Mr. Putin rejected the more cautious counsel of his advisers when he launched the all-out invasion of Ukraine on Feb. 24.

“I am amazed by Russian stupidity. Out of all the options that Putin had before the beginning of the war, he chose the most brutal and the worst option for him,” Gen. Budanov said. “Russian specialists have repeatedly warned him that this option is the last one, and has to be very carefully evaluated. They had much better options for him. Now we see the result.”