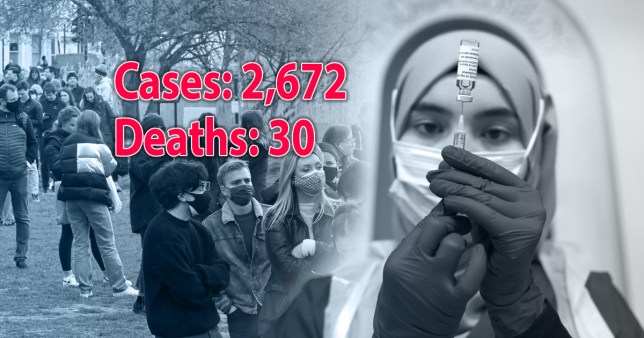 Another 30 people have died with coronavirus in the UK while 2,672 more cases have been recorded.

Another 30 people have died with coronavirus in the UK while 2,672 more cases have been recorded.

It brings the overall death toll to 121,191 while the number of people who have tested positive since the pandemic began is over 4.3 million.

Meanwhile nearly 41 million people have been vaccinated across the country with over 32.4 million first doses and 8.5 million second doses given out as of April 14.

The figures from the Department of Health show deaths, cases and hospital admissions have fallen since this time last week.

It comes as new figures show the number of people in England waiting to start hospital treatment has risen to a new record high of nearly 5 million.

Data from the NHS shows a total of 4.7million people were waiting to start treatment at the end of February 2021 — the highest figure since records began in August 2007.

Many hospitals have been forced to turn operating theatres into makeshift intensive care units and postpone treatment due to a surge of Covid-19 patients.

The NHS Confederation estimates that by the end of the year, as many as 6.9million people could be on a ‘hidden waiting list’ of people who have been referred but are yet to officially join the list.

Charities are calling for more funding to tackle the backlog as England comes out of lockdown and pressure on the NHS stars to leave.

Boris Johnson has urged the public to stay vigilant saying lockdown, not vaccines, is the reason for the fall in infections.

Scientists have said a rise in cases is inevitable as the country opens back up again.

There is particular concern for London, where mass testing has been deployed in several areas after cases of the South Africa variant were found.

Today, a government adviser suggested local lockdown restrictions may be imposed in the capital if surge testing fails to stop the SA strain spreading.