an Afghan pilot trained by the U.S. military, became known for his bravery during six years of fighting in the country’s war, from battling Taliban and Islamic State fighters to helping rescue a crashed American pilot.

Today, facing death threats from the Taliban, he is in hiding with his wife and 4-year-old daughter, after the U.S. reversed its decision to help him leave Afghanistan and live in America.

In late November, the U.S. military asked Mr. Asadi and his family to leave an American military base in Afghanistan, where he had sought refuge from the Taliban for a month, after the Pentagon withdrew its initial support for his request for protection in the U.S.

“We didn’t expect the U.S. government to leave us halfway,” said Mr. Asadi, who says he has killed hundreds of Taliban and Islamic State fighters during his active duty with the Afghan military. 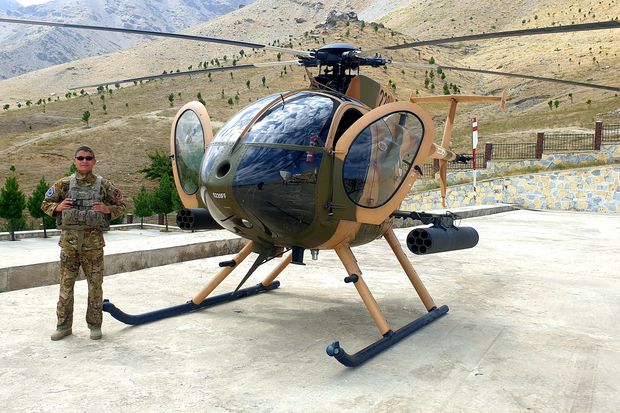 Mr. Asadi is now in hiding with his wife and 4-year-old daughter.


“After completing a full review of the request, the appropriate officials determined that DoD [the Department of Defense] could not support the request,” Pentagon spokesman

As the U.S. prepares to extricate itself from Afghanistan, Washington faces a dilemma over whether to help individuals who fought with and even saved Americans to leave the country—something that could deprive the Afghan military of its best fighters, when the survival of a political project the countries built together is at stake.

Mr. Asadi’s case has raised ire inside the U.S. military, with officers who trained and worked with the pilot saying he has done enough for Afghanistan and for the U.S., and that America should honor its initial pledge to protect him.

the Pentagon’s top officer, met with Taliban officials on Dec. 15 in an attempt to accelerate peace talks between Kabul and the insurgent group that could help end the nearly two-decade-old conflict in Afghanistan.

In Qatar, U.S. and Taliban leaders signed a deal that aimed to end years of fighting. (Originally published Feb. 29, 2020)

has ordered the U.S. military to reduce the number of troops in Afghanistan to 2,500 before Inauguration Day, from about 4,500. President-elect

has said he wants to withdraw U.S. troops in Afghanistan within his first term.

As the U.S. drawdown continues, retaining Afghan pilots who can provide air power to defend cities is essential for Kabul and Washington alike.

Thirty-two-year-old Mr. Asadi graduated in 2013 as one of the first four Afghan pilots—known by their American advisers as the Fab Four—trained to fly the U.S.-made MD-530 helicopter, now a cornerstone of the Afghan Air Force. He says he logged nearly 3,000 flight hours on hundreds of missions, making him one of the most experienced pilots in the Afghan Air Force.

On his first mission, in 2014, Mr. Asadi was sent to a small town near the eastern city of Jalalabad, which militants had occupied. In 2015, Mr. Asadi was dispatched to help liberate Kunduz city from the Taliban, firing a barrage of rockets against insurgents who had surrounded an army base, forcing them to flee, he said.

He was also commended earlier this year by the U.S. military for providing air protection to an American soldier waiting to be rescued after crashing his attack aircraft in northern Afghanistan.

What obligation does the U.S. have to Afghan military personnel who want to leave the country? Join the conversation below.

This year, Mr. Asadi applied for Significant Public Benefit Parole, a temporary protection status for noncitizens in the U.S. He was helped by 12 retired and active U.S. military officers who supported his case. They offered to help him find employment and set him up with a house in New Jersey in preparation for a new life.

U.S. officers who worked with Mr. Asadi say he is particularly vulnerable, largely because the American-led North Atlantic Treaty Organization mission featured him in promotional videos for the MD-530 helicopter.

The Pentagon endorsed his application, and a Pentagon official verified a Taliban threat letter to Mr. Asadi. On Oct. 27, the United States Citizenship and Immigration Services approved Mr. Asadi’s parole, according to case documents reviewed by The Wall Street Journal.

However, on his way to pick up his travel documents, Mr. Asadi said he received a call from an American officer informing him that they weren’t ready after all. A week later, the U.S. military confirmed that it had withdrawn its support for his request, which effectively ensured its rejection.

“It’s an extremely challenging balance, and one that the Department of Defense strives to get right,” said a Pentagon official. “The bottom line is that the United States, DoD specifically, cannot be the element that facilitates an active duty military officer deserting his duty.”

“It is patently untrue and inaccurate for anyone to say that Asadi would be guilty of desertion if he left the Afghan military. There is no crime of desertion codified in Afghanistan’s Criminal Code,” said Mr. Asadi’s U.S. lawyer,

Ms. Motley said the Afghan government has a history of imprisoning citizens for alleged crimes that aren’t codified in law, and she worried the same might happen to Mr. Asadi. Mr. Asadi himself says he can’t return to the Afghan Air Force for fear that he will be arrested for desertion.

Afghanistan’s first female airplane pilot, sought asylum in the U.S. in 2016 during a training course, citing threats to her life at home, the Afghan Ministry of Defense said she would be arrested if she returned. Ms. Rahmani received asylum in 2018 and now lives in the U.S.

A spokesman for the Afghan Ministry of Defense,

didn’t comment on whether Mr. Asadi would be arrested if he returned to duty.

The spokesman said the Afghan security forces took the threats against Mr. Asadi seriously, but they weren’t providing him with extra protection.

“We are responsible for providing security for him and his family,” said Mr. Aman. “We do it for him, as we do for the rest of our personnel.”

A Pentagon official said that after receiving the initial approval, senior U.S. military officials in Afghanistan approached the Office of the Secretary of Defense, which then conducted another review.

Eventually, the Defense Department concluded that the threats against Mr. Asadi weren’t “greater or more alarming” than those facing other Afghan soldiers, the Pentagon official said.

“The solution of the hundreds and hundreds of people who face security threats can’t be to get on a plane to America,” said the Pentagon official. “It would absolutely gut the Afghan security forces.”

His case has struck a nerve among Afghans wanting to leave the country along with U.S. troops, as well as American soldiers eager to protect partners with whom they fought.

The U.S. promised Mr. Asadi a new beginning, and “we need to honor that,” said

a retired U.S. Army pilot who trained Mr. Asadi. “He has nowhere to go.”

Mr. Caraballo said that years ago, Taliban fighters pulled another Afghan fighter he had trained off a bus, found documents in his luggage tying him to the American pilot-training program and slit his throat.

Mr. Asadi “has done everything he can so effectively for” the Afghan military, Mr. Caraballo said. “He needs to see his child grow.”

The controversy over Mr. Asadi’s case comes amid a wave of assassinations of Afghan government officials. Targeted killings of civilians, including officials, have surged to 531 in the first 10 months of this year from 369 in the same period of 2019, according to the United Nations.

said that soldiers who join the Afghan military have to honor their commitments and not use their service as a ticket to leave the country.

“As far as the threat from the Taliban is concerned, every Afghan’s life is threatened,” Mr. Mohib said.