BIRMINGHAM, England—Less than a month into her tenure as U.K. prime minister,

is seeing her political authority rapidly erode as her bold experiment in British Reaganomics spins out of her control.

After presenting the biggest tax cuts in a generation to try to jolt the U.K. economy into higher growth, Ms. Truss is locked in a battle on three fronts as she tries to win over skeptical investors, the British people and her own lawmakers. Some in her party are already privately describing her as a lame duck leader, with up to two years before the next general election.

On Tuesday, a day after her government dropped a key part of its plan by reversing an initiative to cut the top rate of income tax to 40% from 45%, Ms. Truss was facing another fight with members of her own party over how to pay for the remaining £43 billion, the equivalent of $48.7 billion, in tax cuts the government has proposed.

Ms. Truss and her team have suggested freezing social-welfare benefits below the rate of inflation, an idea that drew criticism from other members of the party who said it would be a difficult step to take at a time when high inflation and weak growth are generating economic pain for many voters.

the leader of the House of Commons and a member of Ms. Truss’s cabinet, said Tuesday that she supported benefits rising in line with inflation, contrary to Ms. Truss. Several others agreed.

“I think colleagues are going to struggle with it, and this could be one of those areas where the government is going to have to think again,” said

Turmoil in the U.K. bond market created a feedback loop that left investors like pension funds short on cash and rippled out into other markets. WSJ’s Chelsey Dulaney explains the type of investment at the heart of the crisis. Illustration: Ryan Trefes

-esque revival of the British economy. Within days of taking office and unveiling her plan, her government was embroiled in chaos as the pound plunged and the Bank of England had to intervene to stop U.K. pension funds from collapsing amid investor fears over the health of the country’s finances. Former Tory leader

called it a terrible start to a premiership.

A lone bright spot for the British leader this week has been U.K. financial markets, which have stabilized after she and Chancellor of the Exchequer

dropped the top tax-rate cut, vowed to ensure fiscal responsibility and agreed to have a prompt independent budget appraisal of their plans. On Tuesday, the pound strengthened again, up 0.64% to 1.14 U.S. dollars a pound. Government borrowing costs also fell again, with the yield on the benchmark 10-year government bond, or gilt, down 0.13 percentage points to 3.835%.

The upheaval, however, has come at a cost, damaging the Tories’ image as a steady pair of hands for the economy. Polls show the Conservatives have slumped to record lows against the opposition Labour Party in the wake of the economic plan.

“We have seen the government lose its advantage on economic competence and that is a huge moment,” said James Johnson, co-founder of pollster J.L. Partners, who used to advise Downing Street. Mr. Johnson said Ms. Truss will soon have to switch to a plan B if she is to corral her party and regain voter confidence.

At the Conservative Party conference under way in Birmingham, normally an event that lauds the conservative leader of the day, lawmakers invoked a blitz spirit as they prepared for a difficult election in 2024. Many privately expressed amazement at the chaos that has engulfed Downing Street in the past three weeks. They either criticized the tax policy or criticized Ms. Truss for ditching it. Most of all they criticized how she communicated the plan.

Penny Mordaunt, a member of Liz Truss’s cabinet and the leader of the House of Commons, has opposed her party leader’s position on social-welfare benefits.


“I think the prime minister made a major blunder by saying ‘No U-turn’ on something that she subsequently had to do,” Roger King, a former Tory lawmaker who served under Margaret Thatcher, said as he strolled around the conference hall. “One has to think in terms of Margaret Thatcher—she said no U-turns but she meant it.”

accused colleagues who pressed Ms. Truss to backtrack of having staged a coup, prompting U.K. newspaper the Sun to dub it a “coup d’tax.”

When asked on Tuesday if the Conservative Party was united behind Ms. Truss, one of her cabinet ministers simply grimaced. Ms. Truss was pressed in an interview on television on whether she trusted her chancellor of the Exchequer. She refused to say she did. Conservative party elders warned Ms. Truss earlier this week to scrap her cut to the 45% tax rate, which kicks in at earnings over £150,000 a year, because her lawmakers wouldn’t vote it through Parliament.

Part of Ms. Truss’s problem is the circumstance of her coming to power. After her predecessor,

quit, Ms. Truss was selected by 81,000 Conservative Party members to lead the nation. Some two-thirds of Conservative lawmakers, however, wanted former Chancellor

Ms. Truss has laid out a rethink of the British economy and state, arguing that the country needs to find a way to avoid paying ever higher taxes for public services. Before Ms. Truss’s plan, Britain was projected to have its highest tax burden since the aftermath of World War II. Under Boris Johnson, taxes grew as an aging population and the Covid-19 pandemic put pressure on public services such as the state-run healthcare system.

“In order to get Britain moving, we need to have the courage of our convictions. As Conservatives, we have fallen out of the habit of making Conservative arguments,” Ms. Truss wrote on Tuesday in an opinion column for the Daily Telegraph.

Without the support of lawmakers or the broader British public, however, she faces an uphill battle selling big changes to the Conservative manifesto that was voted for in 2019—including more spending to help poorer areas of the country left behind by globalization. 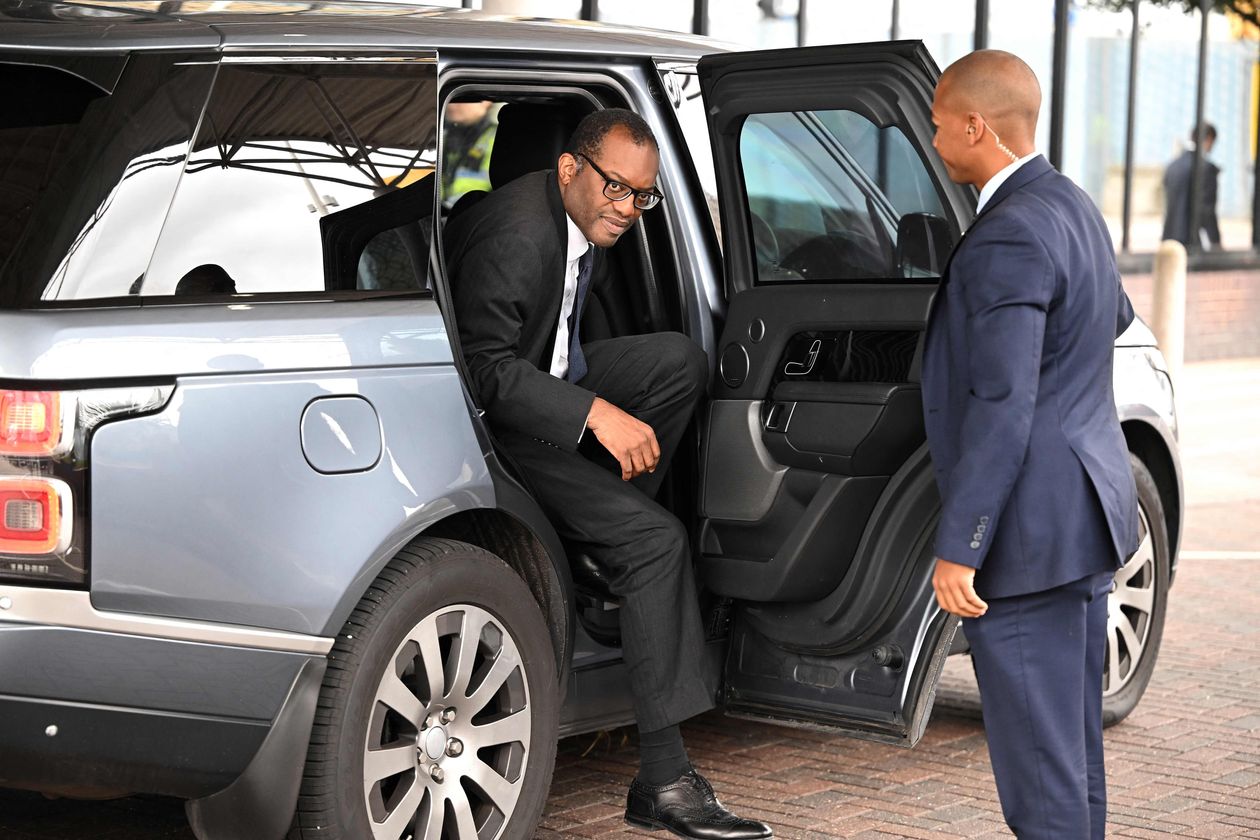 U.K. Chancellor of the Exchequer Kwasi Kwarteng’s announcement of the planned cut to the 45% tax rate, since abandoned, caught many in the party by surprise.

a former Tory cabinet member who supported Ms. Truss’s campaign to be leader, turned on the prime minister earlier this week, saying Ms. Truss had no mandate to force through the changes she wanted and should call an election.

Ms. Truss stacked her cabinet with loyalists rather than reach out to rival Tory groups of lawmakers, and she caught many in her ranks by surprise when the chancellor announced the cut to the 45% rate. Senior party officials expect her to shuffle her leadership team in the medium term.

On Tuesday, she said her government had listened to the criticism and changed course. “What we have done is we listened to what people said on this issue,” Ms. Truss said Tuesday, wearing a hard hat at a construction site in Birmingham. “We do respond when there are concerns and we act quickly.”

Despite the recent market rally, many investors are skeptical that Ms. Truss’s plan will deliver fast-enough growth to pay for the £43 billion of tax cuts, not to mention scores of billions in subsidies to keep energy bills capped over the coming winter.

Economists argue that Ms. Truss’s stimulus plan will simply trigger the Bank of England to aggressively raise rates to cool rampant inflation, inflicting pain on already struggling households and businesses. Ratings agency S&P on Tuesday lowered its prognosis for the U.K. economy, seeing it contract by 0.5% in 2023, rather than grow 1.0% as previously forecast.

Write to Max Colchester at Max.Colchester@wsj.com

Corrections & Amplifications
On Tuesday, the pound strengthened again, up 0.64% to 1.14 U.S. dollars a pound. An earlier version of this article incorrectly said the pound had strengthened to 1.14 a dollar. (Corrected on Oct. 5)