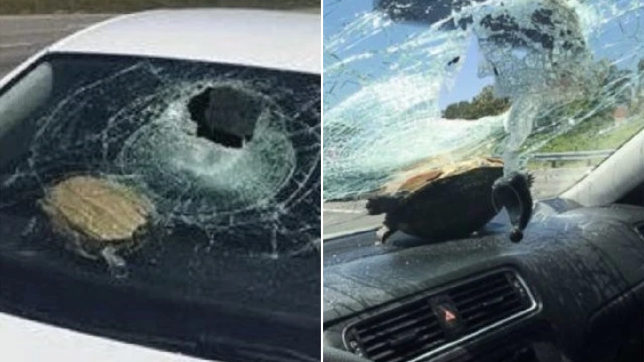 An airborne turtle crashed through the windshield and hit a 71-year-old woman in the passenger seat (Pictures: The Daytona Beach News-Journal)

A 71-year-old woman was sitting in the passenger seat as her daughter drove on a highway near Port Orange, Florida, when a turtle came flying through the windshield and clobbered her in the head.

The elderly woman’s daughter was also in such a state of shock that she had to ask a motorist who stopped to help if he could tell her what had crashed through the glass.

‘There is a turtle in there’, a man is heard saying in a 911 call on Wednesday morning, according to The Daytona Beach News-Journal.

‘A turtle!’ the daughter replied. ‘An actual turtle?’

In her 911 call, the daughter said she had no idea at first what had burst through the windshield, or how it became airborne.

‘We are on Interstate 95. Something just came through the windshield and hit my mom in the head’, the daughter told the dispatcher. ‘She’s got so much blood coming out of her head’.

The turtle possibly launched in the air after being hit by another vehicle.

A dispatch supervisor who confirmed the incident said ‘it’s crazy’.

The elderly woman had a half-inch to inch-long gash above her eyes but remained conscious. Dispatchers instructed the daughter on using towels to apply pressure on her mother’s wound to stop the bleeding until an ambulance arrived. The mother was taken to Halifax Health Medical Center in Daytona Beach, Port Orange police spokesman Officer Andre Fleming said.

‘I swear to God, this lady has the worst luck of anything’, the daughter said.

The identities of the women were not disclosed.

As for the turtle – it survived, a firefighter commented on Facebook.

The turtle only had scratches on its shell, Fleming said, and firefighters set it free in the woods near the scene.

As unusual as Wednesday’s incident was, it was not the first of its kind in Volusia County. In 2016, a turtle crashed through a windshield near Deltona, according to the Florida Highway Patrol.