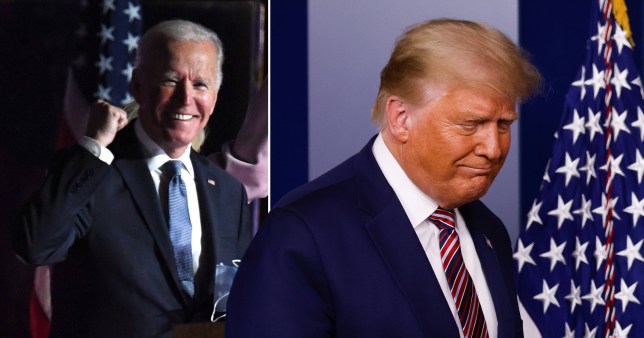 Donald Trump’s campaign team has claimed the election ‘is not over,’ as forecasters begin to call Joe Biden the next President of the United States

Donald Trump’s campaign team have released a statement insisting ‘This election is not over,’ as one official forecaster predicted a Joe Biden win.

The President of the United States’ team said Biden had only been called winner because of a ‘false projection…based on results in four states that are far from final.’

The statement, signed by Trump lawyer Matt Morgan, continued: ‘Georgia is headed for a recount, where we are confident we will find ballots improperly harvested, and where President Trump will ultimately prevail…

‘There were many irregularities in Pennsylvania, including having election officials prevent our volunteer legal observers from having meaningful access to vote counting locations.’

Morgan issued the statement after Biden pulled ahead of Trump in Pennsylvania’s count shortly after 9am EST on Friday morning.

That prompted officially-approved forecaster Decision Desk HQ to name him president-elect of the United States.

NBC News briefly referred to Biden as ‘president-elect’, although it retracted that prediction shortly afterwards. Other official forecasters including Associated Press, CNN and Fox News have yet to make the same call.

The Trump campaign’s statement also targeted ongoing counts in Nevada, saying ‘there appear to be thousands of individuals who improperly cast mail ballots,’ in the Silver State.

On Thursday, Trump’s team alleged that thousands of people who did not live in Nevada had cast votes there, a breach of election rules. 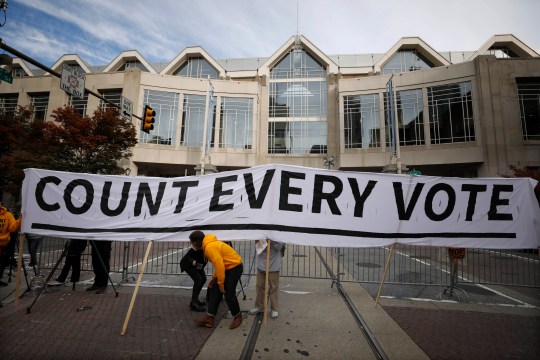 Protesters in Philadelphia on Friday, as Pennsylvania announced Joe Biden had overtaken Trump in the race for the president, prompting one forecaster to call Biden the election winner (Picture: Reuters)

Winning Pennsylvania’s 20 electoral college votes would instantly put Biden over the 270 he needs to win by all current forecasts.

CNN and The New York Times have Biden on 253 electoral college votes, to Trump’s 214.

Meanwhile, the Associated Press and Fox News have also called Arizona for Biden, giving putting him on 264 election votes, meaning he would rocket to 284 with a Pennsylvania win.

If Biden wins Pennsylvania, Trump would still not be able to catch up with him even if he won Arizona.

Developing story, check back for updates

Follow our US election live blog for the latest news and updates on the 2020 election.

Who is currently leading and what happens if neither candidate gets 270 votes? Find out here: