PC Bee Bailey said she tried to be herself, but in a ‘hidden sense’ (Picture: Bee Bailey/BPM)

A police officer was left feeling mortified and afraid after she was outed by a colleague for being transgender.

PC Bee Bailey thought that was the end of her career, fearing she’d be fired or hounded by the press.

But she has since gone on to enjoy an illustrious 22 year career in Gloucestershire Constabulary, which has helped her grow into a far more confident person.

Bee has worked as an ambassador for trans officers in Europe and has delivered presentations with everyone from frontline cops and then Prime Minister Theresa May.

Sharing her story, Bee told how after a bad day at work as a graphic artist, she came across a job as for Gloucestershire Constabulary in the newspaper.

She felt inspired to do something different and took the force up on its offer, but when she received her acceptance letter, she started having doubts.

Bee, who lives in South Gloucestershire, says she suddenly thought ‘Oh my gosh, I’m going to have to give up being trans’.

She desperately tried to hide who she really was because she thought the force would not tolerate it.

Bee said: ‘When I joined the police, I used to joke that I was a “crime-fighting superhero by day, and a princess by night”, and the two were never going to meet.

‘I remember going out for the last time and thinking “This is absolutely it, I cannot be found out for this because I’ll be fired”. 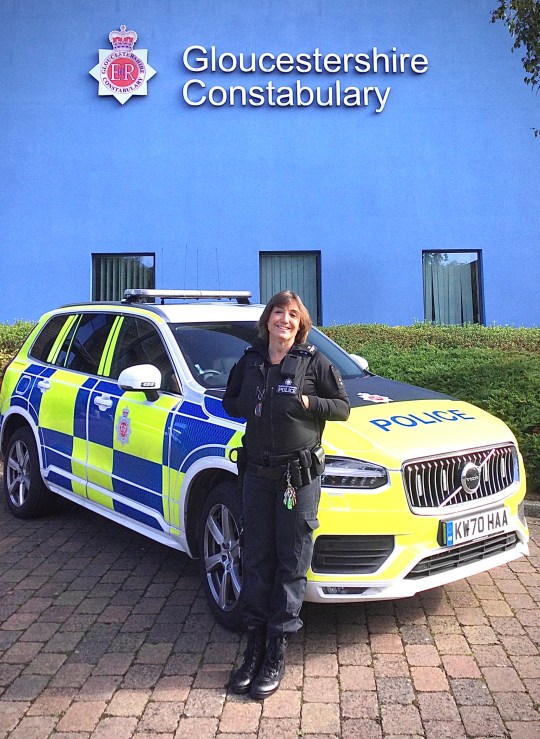 Bee said she feared being ‘smashed by the press’ (Picture: BristolLive/BPM)

‘Being fired was the best option in my head – the worst being I could have been smashed by the press.

‘The press were a very different animal then, you used to see phrases like “gender bender cop”. It was not nice stuff, and it was always the worst choice photograph.

After a few weeks in the police force, Bee tried to be herself, but in a ‘hidden sense’. She returned to her social life as Bee, but still kept things under wraps at work.

She said: ‘I was working in Stroud at the time, and I knew it likely wouldn’t be tolerated or be an easy journey if I was found out.

‘We have a professional standards department, and I’d feel physically sick if I saw somebody I didn’t know in the station in a dark suit.

‘The positive twist is that I would live policing to the absolute full, so if lights and sirens could go on, they went on because I was waiting month in, month out to be found out, sacked, and end up in the press.

‘My arrest rates were the highest for about eight months at Stroud Police Station.’

A few years passed, and Bee began to head down the route of gender affirming surgery.

She went to the NHS for a referral to the gender clinic and began hormone treatment, which caused her body to change shape.

Bee says she then moved into the force’s intelligence department so she could grow her hair out a little bit.

She was assigned to the Royal International Air Tattoo, and left her hat lying around and lost it, so she got in touch with the uniform stores.

She said: ‘The guy looks me up and down – he can see something is going on and that I’m not an everyday cop. He says: “What hat do you want?”

‘I said: “That’s a good question, I know what hat I’d like, but I’m not sure what the organisation is allowing me”.

‘He went pale. He wobbled a bit. He looked me up and down and he could see there were lumps and bumps in the chest area and you could see him going paler.

‘And then there was a lightbulb moment in his head – he lit up and said: “I’ll tell you what, I’ll issue you all the hats”.

‘It was for me to decide and forge that route, which happened, in the end, to guide and signpost the organisation on policies, procedures and best practices, which I still do now.’

Bee, 51, says she travelled to work on a motorbike, as the helmet would protect her from any potential press photographers.

But shortly after, she became overtly involved in trans organisations. 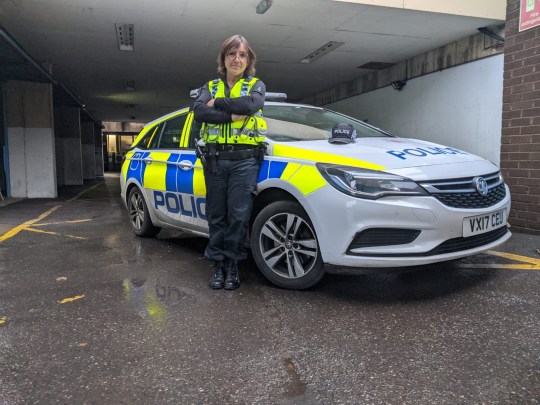 Bee has since gone on to enjoy an illustrious 22 year career in Gloucestershire Constabulary (Picture: Bee Bailey/BPM)

After starting the National Trans Police Association, Bee made the front page of a national newspaper, and was slated.

At this point, Bee wasn’t out as trans, and she felt like her whole world ‘had imploded’.

Bee was then outed at work by an inspector, who is now long retired, but she says this was ‘a pivotal point’.

‘Even though I was doing this proactive stuff, I was completely hiding it from this local constabulary – it just felt like the right thing to do,’ she said.

‘I got outed by an inspector, and I had a meltdown. My biggest secret was out.

‘Again, I was worried I was going to be in the press, I took about four or five months off, and the two distinct things I remember is that I couldn’t put it back in the box, and that it really hurt.

‘It was that moment, it just turned itself on its head and I realised nobody else should go through this.’

From there, Bee’s career springboarded. She was invited to Amsterdam as one of 200 movers and shakers who were changing the world of policing.

She was invited by the European Police Association to take on a role as an ambassador for trans progression.

‘Suddenly, I went from this little scared person, to this quite bold, confident individual. I knew I was doing the right thing,’ said Bee.

‘I started doing talks and presentations with everyone, from frontline cops to prime ministers and ambassadors.

‘It was lovely to talk to Theresa May – we got onto non-binary stuff which wasn’t in conversation then.

‘The reality is, you only get a very small time, but I think the nice thing is I clearly got on someone’s radar to be emailed by 10 Downing Street.

‘And even though it was a celebration of LGBT stuff, there were four of us that were taken up to her private veranda to have a more in depth conversation. It was really lovely, we talked about shoes at the end.’

Bee then had breakfast with the Irish PM, discussing trans and non-binary policies in policing, and was also invited to the first ever Belfast Pride.

She has also worked in the Palace of Serbia whilst on a project with Stonewall, touring around the Western Balkans, discussing hate crime, best practices, policies and procedures.

Bee said: ‘Stuff has progressed slowly. Things don’t happen overnight. I’m coming up to 22 years in now, and there is no problem with being trans here, in the police, in any police force.


‘But it’s been a heck of a journey and there are some times where I have had to bang desks, and have gone home at the end of the night going “Oh my gosh, have I pushed my luck”.’

One tip Bee has for people who are genuinely curious about life for trans people is to preload their question with the phrase ‘May I ask’.

She added; ‘And you can see by my body language that it’s not gratuitous, it’s a genuine question.

‘My wish is to better the lives and understanding for trans and non-binary communities be they police or public.

‘It is always an absolute privilege to come into contact with like-minded folk who wish for the same, be that socially or professionally.’