A Tory MP has claimed Nusrat Ghani’s allegation that concerns were raised about her Muslim faith when she was sacked as a junior minister ‘stinks’.

In a radio interview, Michael Fabricant said the timing of her claim was ‘very suspicious’, and suggested it was linked to moves to get rid of Boris Johnson over the Downing Street lockdown parties scandal.

He said Ms Ghani was not ‘obviously’ a Muslim, and it was ‘lame’ to claim that was the reason she was fired as a transport minster in a reshuffle in 2020.

Labour described his comments a ‘shameful’ and called for the Conservative whip to be withdrawn.

Speaking on LBC, Mr Fabricant said: ‘The timing is interesting. I think all this is because it’s open season on Boris Johnson, putting pressure on him from the party trying to get him to resign.

‘I think the whole thing actually stinks, the accusation being made by Nus Ghani.

I say in this LBC clip that prejudice is unforgiveable.
But Nus Ghani claims her being Muslim made people uncomfortable. I don’t buy that at all as most people wouldn’t have had a clue whether she was Muslim or not.
And if they had, prejudice would of course be wrong. https://t.co/1EC5xEIRw6

‘She’s hardly someone who is obviously a Muslim. I had no idea what religion she is. It does seem rather a lame excuse to me that she was sacked because of that.’

‘If the Tories wanted to show they were serious about tackling Islamophobia, they could start by removing the whip from Michael Fabricant.’

Labour Party chair Anneliese Dodds said the response of the the Tories to Ms Ghani’s claims had been shameful.

‘For a Conservative MP, Michael Fabricant, to go on the radio and make comments that reflect exactly the sort of unacceptable behaviour Nusrat has raised shows just how deep the problem in the Conservative Party goes,’ she said.

But Mr Fabricant defended his comments, sharing the clip on Twitter and adding: ‘I say in this LBC clip that prejudice is unforgiveable.

‘But Nus Ghani claims her being Muslim made people uncomfortable.

‘I don’t buy that at all as most people wouldn’t have had a clue whether she was Muslim or not.

‘And if they had, prejudice would of course be wrong.’ 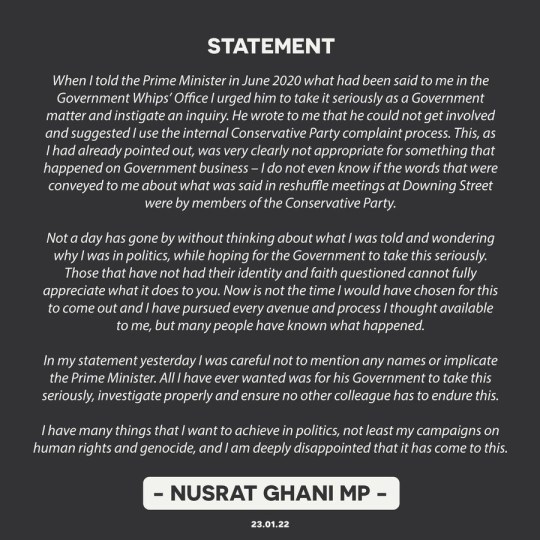 Ms Ghani was appointed assistant whip and transport minister in 2018 under Theresa May.

She was the first female Muslim to speak from the Commons dispatch box.

At the time, then-Transport Secretary Chris Grayling told the BBC her promotion showed the Conservatives ‘were a party of opportunity’.

‘We’re the party to provide… the first Muslim woman minister to speak from the government dispatch box – the member for Wealden,’ he said.

She was removed from the role in 2020 despite being tipped to oversee HS2, and has previously said she was surprised at the demotion.

Ms Ghani told the Sunday Times that she was informed by a Government whip that her faith made colleagues ‘uncomfortable’ and that her career would be ‘destroyed’ if she tried to complain.

She claimed her loyalty was questioned because she ‘didn’t do enough to defend the party against Islamophobia allegations’.’

‘It was very clear to me that the whips and No 10 were holding me to a higher threshold of loyalty than others because of my background and faith,’ she said.

In a fresh statement on Sunday, the MP for Wealden said she that after she spoke to Boris Johnson about what had happened in June 2020, and that he wrote to her to say he ‘could not get involved’, and suggested she should use the internal Conservative Party complaints process.

‘This, as I had already pointed out, was very clearly not appropriate for something that happened on Government business,’ she said.

Following the publication of her interview, the chief whip, Mark Spencer, confirmed he had spoken to her but strongly denied making the alleged comments saying the claims were ‘completely false’ and ‘defamatory’.