A fundraising page has been set up to help a British tourist who survived a brutal sickle attack in Thailand pay for his medical bills.

Shaun Kevin Dagnan, 55, was severely injured and his friend Marcus Evans, 49, killed in the attack which took place in Kanchanaburi province.

The pair are understood to have been set upon following a row over ‘music being played too loudly’ in the early hours of Saturday.

Marcus, from Weston-super-Mare, was pronounced dead at the scene while Shaun, from Nuneaton, Warwickshire was rushed to hospital, where he was treated for his injuries.

Yesterday, he was pictured wearing a neck brace and with a heavily bandaged head as he attended a memorial service for his friend near the house where the attack took place.

Wassana Muanchit, 33, Marcus’ partner, also attended the Buddhist ceremony and sobbed while she was comforted by friends.

Following Marcus’ death, Wassana paid tribute to him saying he was her ‘main provider’ and took ‘amazing care of her’.

Alongside blessings from monks, there was a shrine to Marcus with flowers and his favourite meal – burger, fries and a bottle of beer. 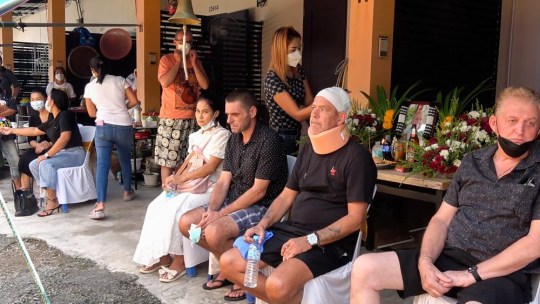 Shaun said he was ‘feeling better’ as he attended the Buddhist ceremony in memory of Marcus (Picture: Viral Press)

Shaun said he was ‘feeling better’ as he attended the ceremony but still experiencing pain and discomfort from his injuries.

‘I’m fine now but I don’t really want to talk about what happened. I’m stressed by everything that has gone on,’ he said.

Nong, Shaun’s girlfriend, said he was badly injured in the attack and was found lying on the ground alongside his close friend.

To help Shaun pay for the medical treatment he received in Thailand his friends back in the UK have launched a fundraising page. 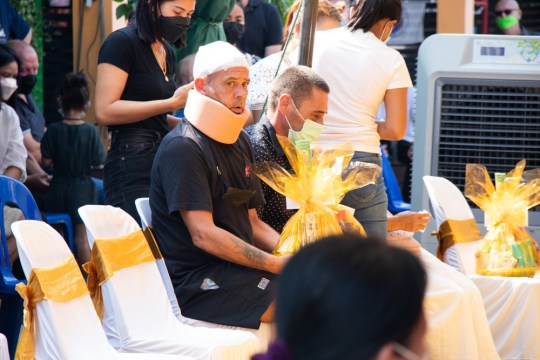 Shaun’s friends have said they feel ‘very lucky to still have him’ (Picture: Viral Press)

In a message on the page, a friend wrote: ‘We’re very lucky to still have [Shaun] with us after sustaining his very serious injuries.

‘His travel insurance had lapsed due to an unexpected extended stay.

‘While he is receiving some support from immigration and the British consulate this isn’t going to be a short process.

‘We are trying to raise funds to help support with costs of medical expenses and recovery.’

Following the attack, Thai police have arrested and charged a 23-year-old local man.